Jump to latest Follow Reply
Menu
Install the app
You are using an out of date browser. It may not display this or other websites correctly.
You should upgrade or use an alternative browser.
Hearts of Iron IV 41302 Bug Reports 12224 After Action Reports (AAR)
Previous dev diary Next dev diary
Show only dev responses 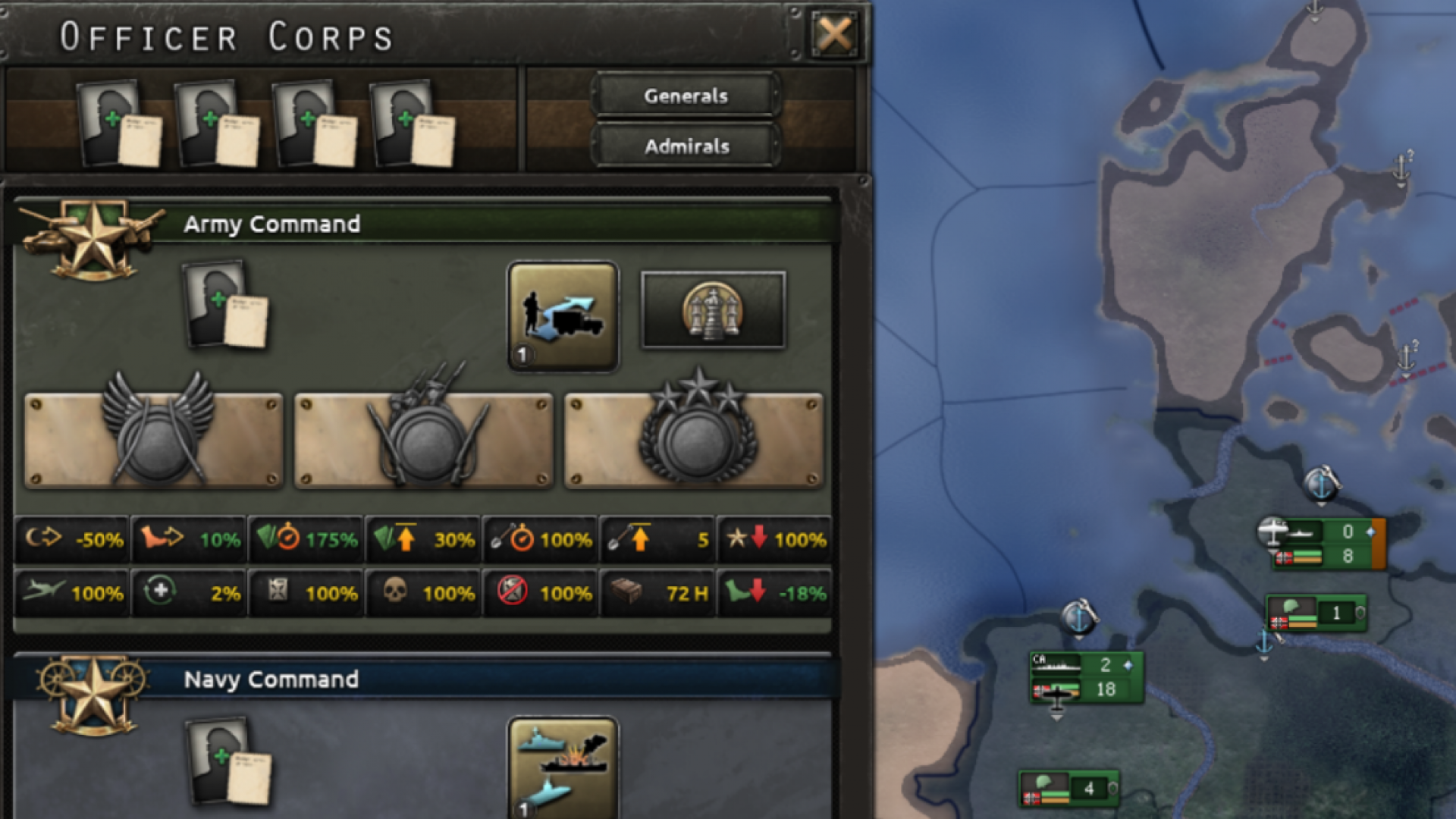 For my first HoI dev diary, I’m here to introduce the Officer Corps: a collection of new features that will be included as part of No Step Back and the Barbarossa update.

For quite a while, we’ve wanted to allow for more direct specialization of military branches, as well as tying together various disparate systems such as the high command, generals, military-focused national spirits, and doctrines. To achieve step one of this process, we’re giving the Officer Corps and associated mechanics a unique national interface:

Here, the empty advisor portraits at the top of the window are where you can now find your High Command and Military Theorist, and the advisor portraits below this are related to each branch Chief - they have been moved out of the political sub-window accordingly.

As well as UI location, there are further changes coming to all military advisors. Where previously, the theorist was the only advisor type that granted daily experience gain, all high command and branch chief will now generate experience appropriate to the branch they represent.

The Advisor rank (e.g. Expert) indicates both the magnitude of their modifier bonus, and the daily experience you will receive.

We’re also experimenting with a split political/command power costs to gate the experience ramp-up somewhat, along with some other minor changes to command power.

Behind the scenes, we’ve made a host of changes to the advisor, spirits, and commander systems. Where previously, if we wanted to create a national spirit related to having a certain character in your government, it would be entirely unrelated to having an advisor with the same name, masquerading as the same person - likewise for commanders and advisors masquerading as the same person. This has changed. These are (for the most part) now controlled by ‘characters’. This has pretty sweeping connotations for our internal content designers, as well as modders, but importantly also allows us to bring the following new system to the No Step Back release:

The introduction of a more connected Officer Corps felt like the perfect time to bring more of a connection to the Generals and Field Marshals that oversee your active forces, and the various military offices that advise your government.

In No Step Back, Generals, Admirals or Field Marshals can be assigned an advisory desk duty in addition to their status as a field commander. This will effectively add the character as a new advisor to your roster.

The type of advisor available to you is dependent on the skill level and traits of the commander you’re ‘promoting’ (not everyone likes desk duty ), as you can see in the highly WIP interface below:


Here, Herr Hell can be converted to an Entrenchment specialist as he possesses the Engineer trait, and has skill level 5. Currently, both Military High Command and branch Chief roles are available.

Experience generation in general has been weighted and balanced in order to achieve a more gradual switch from peacetime generation (a strong cadre of advisors, and unit training), through to wartime. Experience generation from combat and battles has been reduced fairly significantly to account for this, as well as capped (separately from other sources). Overall, experience generation will be consistently higher than in previous versions - this was done both to mitigate the introduction of the tank designer (and thereby increased costs), and to account for the other new ways in which you are now able to spend experience, which we shall cover below.

The eagle-eyed amongst you noticed in a previous diary that the doctrine branches had been removed from the technology window - they can now be accessed from the officer corps interface, and will function somewhat differently to before. Doctrines will be unlocked directly by spending branch experience, which can still be affected by instanced cost modifiers often found in focus trees and events.

(There have been no major structural changes to doctrine layouts)

There are, in addition to the above, several new and exciting things that branch experience will be used for in NSB, some of which are handily teased in the first screenshot of this diary. Alas, we will be covering what those are and how they might affect your gameplay in a future DD.

Looks nice!
I hope we'll see something from Soviet tree next week
Reactions:

Will it be possible to change your original doctrine to another? How much experience will be affected in this case? How strongly does the experience of a general affect the effectiveness of the General Staff?
As I understand it, any general, including the Polish bear general, can be appointed to the rank of chief of staff, is that so?
In the Soviet Union, a number of chiefs of the general staff were shot. What will happen in this case? And will the mechanics of the big purge in the USSR be somehow reworked?
Last edited: Jun 16, 2021
Reactions:

Does "as part of No Step Back and the Barbarossa update" mean these features are a mix of some that are DLC and some that are free update?
Reactions:
C

It is very interesting.

And what about air commanders? This part of the game will still suffer?
Reactions:

So the "appointing field commanders as advisors" part is the only thing of this that is DLC exclusive?
Toggle signature
My mods:
Death or Dishonor: Generals -- Version XII, May 6th 2020

what a great development. I loved it!
and the soviets focus tree? i really want to see.
Reactions:

Will doctrines themselves be changed? Can we expect a rebalancing of some doctrines in order to make them more viable? As part of shaking the meta which is one of the goals of this DLC, some doctrines and branches remain not really good and you almost never pick them. In contrast, others are basically must have and really op in the early to late game, like Superior Firepower.
Last edited: Jun 16, 2021
Toggle signature
I'm a human like everyone else, also brazilian! Always be polite, try to spread your message without violence.
Reactions:

So it wasn't a hat designer after all.
But we do have an advisor designer.
Reactions:

Will there be changes to doctrine balance at all? Will any of the individual doctrine choinces get number tweaks or changes?
Reactions:

Is there anything new happening in the politics section to replace the empty space?
Toggle signature
Things I made:

Arheo said:
Behind the scenes, we’ve made a host of changes to the advisor, spirits, and commander systems. Where previously, if we wanted to create a national spirit related to having a certain character in your government, it would be entirely unrelated to having an advisor with the same name, masquerading as the same person - likewise for commanders and advisors masquerading as the same person. This has changed. These are (for the most part) now controlled by ‘characters’. This has pretty sweeping connotations for our internal content designers, as well as modders, but importantly also allows us to bring the following new system to the No Step Back release:
Click to expand...

Wow! This is something I've previously mused about but I assumed it would be too disruptive to retrofit into HoI4. I look forward to learning more about how this works and how to mod with it! Between this and railroads this update is going to require a lot of changes to existing mods (and, of course, the base game) but I am here for it!
Reactions: