Jump to latest Follow Reply
Menu
Install the app
You are using an out of date browser. It may not display this or other websites correctly.
You should upgrade or use an alternative browser.
Hearts of Iron IV 41120 Bug Reports 12033 After Action Reports (AAR)
Previous dev diary Next dev diary
Show only dev responses
2021? Damn, we are in the future now boys and girls!

I wanted to write this diary because it feels like it's been a really long time since we chatted. Well I guess it wasn’t that long actually but 2020 has definitely made everything feel like its taken forever ;D

2020 has probably been the most challenging year so far for the team since release. The COVID-19 situation really messes with your wellbeing, even if your life normally is chilling inside with your cat and computer games so I hope you are all taking care of yourselves. Looking back I think we overestimated direct impacts to work efficiency and absolutely underestimated impacts to mental health and general well being - things that are also incredibly important for doing a good job and being productive, as well as helping to onboard new members to a team. We have absolutely been impacted, and as a result I want to be pretty clear that you should not expect the next big expansion to drop before summer this year, which is what I was planning before COVID hit us right after La Resistance dropped.
I know a lot of you have been asking about dates for diaries to start up and for us to show stuff again, but you are going to have to wait a bit longer for that. I can say though that the expansion we are brewing up is gonna be pretty sweet I think and focus on a lot of things people have been wishing for

So, given that there was no PDXCON last year, where I normally do this, I felt I should take this opportunity to drop some statistics on you all…

Player Counts
With COVID keeping us all inside we and I suspect a lot of the rest of the gaming industry has seen a lot more players than normal playing. I know personally I have gotten a lot more gaming in. It's going to be interesting to see if there is a dip once our lives go back to normal again (whenever that may be).

Top Mods
I am just highlighting the biggest total conversion mods here, and % numbers are based off daily player numbers. 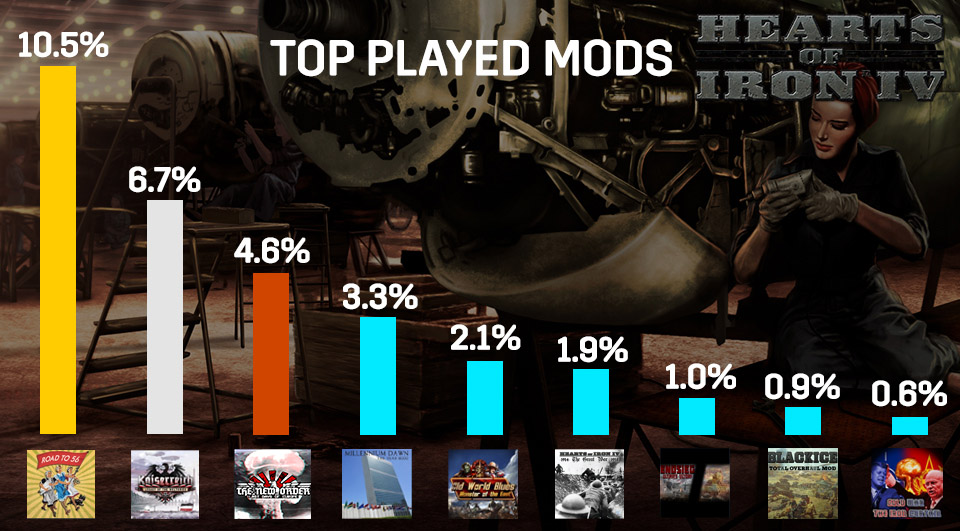 I think the standout here is TNO having jumped up in popularity quite rapidly during the year so congrats to the team behind that! Also feel free to chime in in comments if you think we have any other big up and coming mod to keep eyes on!

Road to 56 and KR keeping their top spots from before, and I also want to say that I am really inspired and impressed by the cool video and other transmedia content the KR team is putting out. I’m eager to see if any other mod teams do similar stuff in the future

I think it's really cool to see Turkey this high. It was always popular but with Battle for the Bosporus it jumped up overall 60%. Greece and Bulgaria also more than doubled in popularity.

While I got you all gathered here reading, I also want to make sure to highlight here that there was an accidental released update of the launcher and that the launcher team is working on reverting that as quickly as they can as it introduced some bugs. Read about it here. I also want to say that we have received increasing amounts of reports of people using cheat tools to mess with multiplayer games over christmas, and we are looking into it.

See you all later, and to be clear this is not the start of regular diaries just yet. You'll have to be patient a bit longer on that front.
Last edited: Jan 20, 2021
Click to expand...

First! Thank you, much success!
Reactions:

Thank you for the Dev diary, even if it wasn’t content based it’s nice to have an update
Reactions:

Thank you for the update and for fixing the launcher issue so promptly!
Reactions:
N

Obviously the most important thing is for you to all look after yourself, but it does feel so frustrating sometime that HOI4 seems to be by far the least supported paradox game with the least resources given to it. Really do hope that you keep taking care of yourselves though and I'm excited for what you'll have for us whenever it does come!


podcat said:
See you all later, and to be clear this is not the start of regular diaries just yet. You'll have to be patient a bit longer on that front.
Click to expand...

I don't suppose you can give us a hint - are we talking a few weeks here or several months?
Reactions:

Glad to see TNO so high up! Super proud of our work...

though I do feel the need to mention we are not New World Order, a completely different mod
Toggle signature
Godherja: The Dying World
Reactions:

I know I've been playing Bulgaria much more often. Before BftB, I had never played Bulgaria, but with BftB I've been enjoying Bulgaria and its pretty close to being one of my favorite nations. Beyond that, just some questions:

Both Hungary and Bulgaria have a bug (or possibly oversight)where when you put the Democratic party in via a national focus, they don't have elections, is this being fixed?

Is Theomisticles Sofoulis going to stop having two jobs at once (Being the leader of the Democratic faction for both Austria and Greece)
Toggle signature
Hearts of Iron IV:
Also Check out my Suggestion to Fix the US Presidency in HOI4
Expanded News Events
Greek Political Parties Suggestions
Byzantine Emperor Suggestions

Thanks, now for not disappearing for months: D
Toggle signature
I do hoi4 (and other) Series on Youtube
https://www.youtube.com/channel/UCWzJOXFBnbljpUd9R1P18tg/
Reactions:

https://steamcommunity.com/sharedfiles/filedetails/?id=1858912372 Stats are wrong as this is missing
Reactions:

I am eagerly awaiting the great Soviet focus tree rework.
Toggle signature
"Know how to listen, and you will profit even from those who talk badly." Plutarch
Reactions:

lmao the icon they used for TNO
Reactions:

Yeah, game is alive thanks to the modding community. see you in 2022 for the next crazy expansion
Reactions:

Soviets - 2nd place; Italy - 3rd;
I would like to see their trees reworked.
Reactions:

Zarkaro said:
Yeah, game is alive thanks to the modding community. see you in 2022 for the next crazy expansion
Click to expand...

In some ways, but overall the game is simpler (in my opinion) compared to HOI 3 which makes it more accessible for new players.
Toggle signature
"Know how to listen, and you will profit even from those who talk badly." Plutarch
Reactions:

podcat said:
I can say though that the expansion we are brewing up is gonna be pretty sweet I think and focus on a lot of things people have been wishing for
Click to expand...

Could he BE anymore vague?!

Seriously, though, nice to hear from you again!
Toggle signature
Closed the Gates of Hell by filling it with cows!
"You get what you pay for" simply does not apply to computer games.

Huzzah! The devs are not dead yet!
Toggle signature
I'm going to stalk him and become obsessed with him. And wear his makeup, and his dresses and use his skin as a coat, like the Ancient Irish did.

As eager as I am for Barbarossa diaries
A little check in isn’t that bad .
Reactions:

Good to hear of you guys! I hope you all do well.
Toggle signature
Lang lebe Seine Majestät, Kaiser Wilhelm II.
Reactions:

MrMcQue said:
Huzzah! The devs are not dead yet!
Click to expand...