Jump to latest Follow Reply
Menu
Install the app
You are using an out of date browser. It may not display this or other websites correctly.
You should upgrade or use an alternative browser.
Hearts of Iron IV 37697 After Action Reports (AAR)
Previous dev diary Next dev diary
Show only dev responses

Hi everyone! Sorry about the late diary. We had to hunt down some gremlins in the machinery before stuff could be screenshotted. Today we are going to talk about quite a lot of big changes to naval production and repair as well as the new critical hits system for ships.

Ship Production
The current system of producing ships where you can assign 15 dockyards to the production of an individual vessel leads to results that are both quite ahistorical as well as not feeling like we want the naval play to feel. With big countries able to replace the loss of a big capital ship without much sweat it makes them less precious, and so we are changing this:
This essentially shifts capital ship construction speed to make each ship slower to make, but you can still build several in parallel. Constructing capital ships is complex and not exactly suitable for optimized assembly lines while we felt this still fit convoys very well with other ships in the middle. Speaking of capital ships, the definition is now a bit more flexible and will depend on the inclusion of certain design elements in your ships (such as a carrier flight deck or heavy guns), so if you construct your ships with those be aware that it will impact how streamlined their construction can be made. 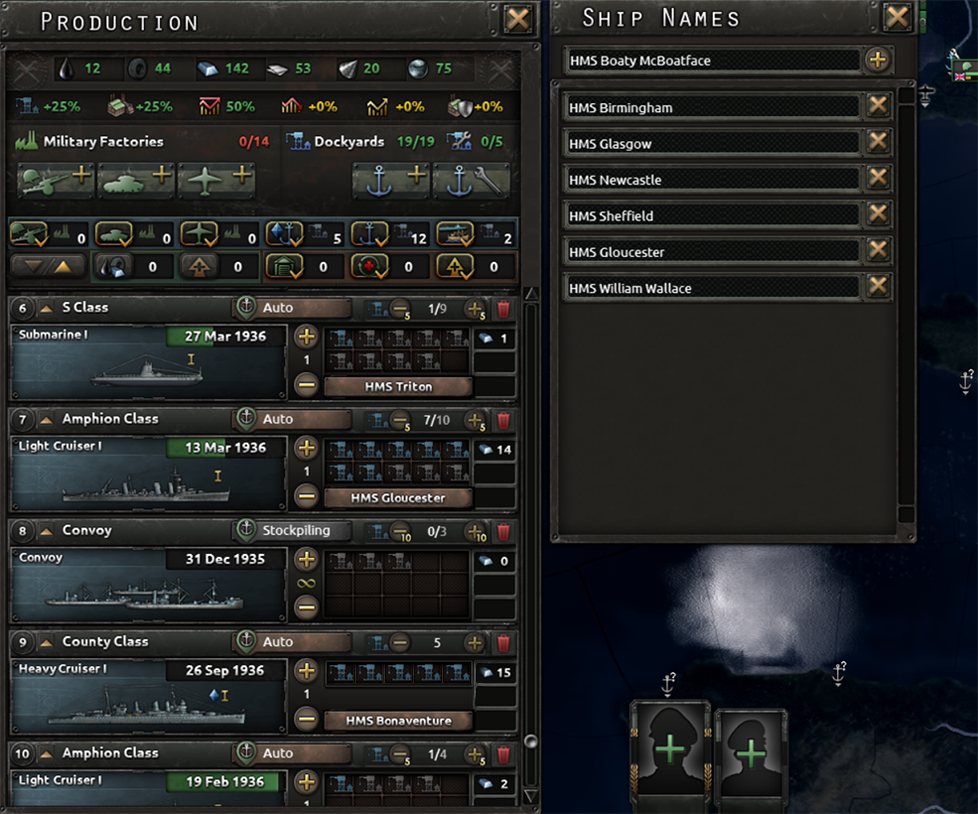 It is also possible to add custom names when you set up construction. The perfect time to remember to name your battleships awesome custom names rather than having to remember and do it once they are done. You can queue up several names if you so wish.


Ship Repair
Repair is also changing drastically. Before, repairing a vessel was free and just took time, now it’s using your naval industry to do so. You can decide how many dockyards to assign as a max and the level of the naval base will decide how much can be leveraged in each one. So if you have a level 5 naval base you can leverage 5 dockyards there and repair 5 ships at once. 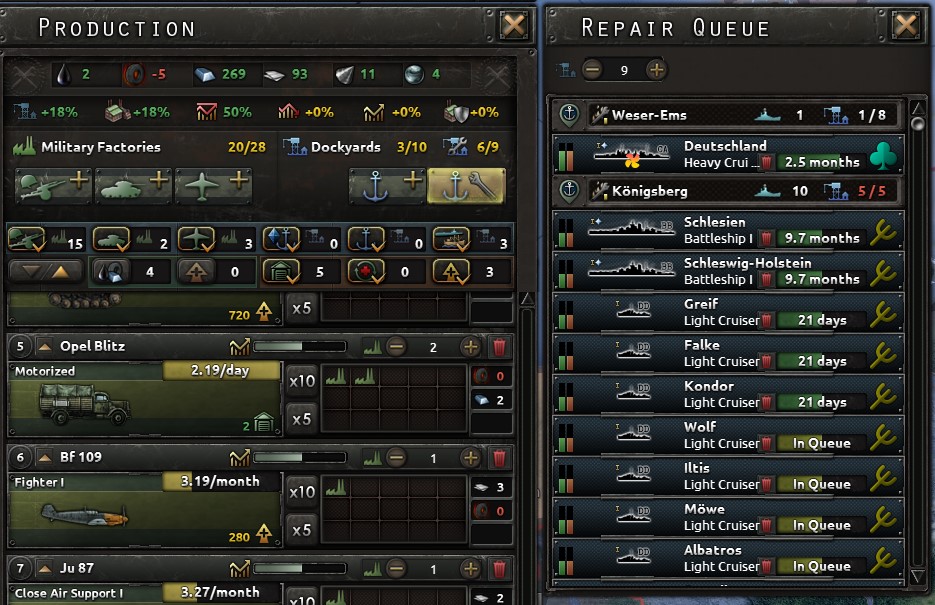 Bases can be prioritized for receiving dockyards if you have a lot of fleets suffering at once in various places and can even be disabled for repair so you don't accidentally send ships to repair where the enemy will sink them etc. You can even repair in friendly ports if you have docking rights, but are likely to have lower priority than their ships if there is a competition for attention.

If you look closely at the damaged Deutschland heavy cruiser you will see that there is a warning icon on top of it. This signifies that it has taken a critical hit to its propeller and is suffering a big penalty to speed...

Critical Hits
On top of the propeller damage shown off above there are a lot of different critical hits a ship can suffer in combat. The idea behind these is to add some cool storytelling to the fate of ships, and to introduce some lucky random elements. For example imagine there is a lucky hit on a fast and powerful German surface raiding vessel damaging its propeller or engine. Suddenly it is no longer able to escape the royal navy’s wrath as it has planned to do.

Different kind of hits have different effect, and also will cause different amount of direct damage. We are still finalizing the amount of types we have, but here is a non-complete list to wet your appetites:
Suffering a critical hit is a good reason to repair your ships and they need to be fully repaired to remove the effects of the critical hit. There are several admiral traits designed to help you cope as well.

“Safety First” Lowers the chance of the ships under this admirals command suffering critical hits in the first place while “Crisis Magician” unleashes your internal Scotty which will reduce any effects of critical hits through jury rigged repair, fancy maneuvering and probably a fair amount of god old duct tape.

Is this all? No, there will also be a brand new ship designer and the ability to refit. But that ship is not yet watertight, so it will sail in a future diary instead

See you all next week again for more Man the Guns updates!

Whoa. Dockyards to repair ships? At the very least, damaging enemy ships will at least substantially impact the enemy power instead of it being a minor inconvinience

Can we get detonation ribbons for these?
Last edited: Sep 12, 2018
Toggle signature
Good Morning! How does it feel to be strapped into a walking nuke reactor at 6 a.m.? Bet you wish you studied harder in school eh?
Heh heh, hit that throttle! You'll be killing people before breakfast today, mostly soldiers, maybe some civilians.

Novacat said:
Whoa. Dockyards to repair ships? At the very least, damaging enemy ships will at least substantially impact the enemy power instead of it being a minor inconvinience
Click to expand...

The idea is to shift naval warfare away from everythign dies right away to a place where not everythign is lost but it costs a lot of time and industry to repair it
Toggle signature
Reject reason to make the impossible possible!

“It’s why we must focus on our own well-being in the present,” Aslan said, “and build as many trains as we can before dying.”
“To trains,” Lucy said, and they all raised a meaningful glass.
S

Cool! Am i right in assuming there wil be some form of new fleet interface, considering the symbols traditionally used for armies in the fleet repair screenshot?

Now that repair is specific to a naval base well we have the ability of targeting a specific base in an Air Attack?

BTW I am just loving this expansion thus far. I believe that this is showing to be the best one of all. Please continue the great work.

Sounds great so far. Thx for the DD! 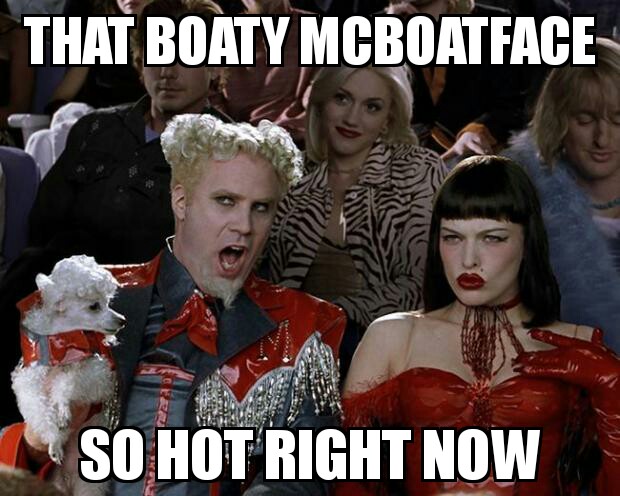 The repair change will be interesting for those with a lot of dockyards. It will make many small nations even harder to build up navies for though

Svenkomigen said:
Cool! Am i right in assuming there wil be some form of new fleet interface, considering the symbols traditionally used for armies in the fleet repair screenshot?
Click to expand...

yup. the reason they are army symbols is that they havent all been set up yet everywhere. we got different ones for navies
Toggle signature
Reject reason to make the impossible possible!

I take it that dockyards can be assigned in a way that allows them to be occupied in building ships when not used for repairs. Otherwise you would need a lot of naval build capacity to make this all work.

Some day it would be cool to have dedicated forward repair facilities. But this is a good change in the meantime.
Toggle signature
Sad Refugee from Paradox Games Past

Seems nice and all. One question though; it mentions Main batteries and Secondary batteries. Does this mean the damage number is split inbetween them? Can this be changed with refitting?

Or is this a damage to the i.e. AA guns on a capital ship?

Excellent changes all around, I'm pleasantly surprised to see critical hits having been reworked.

But I wanna play it noooooow.
D

Why does this diary has a date in the title unlike others? Does it mean something?