Jump to latest Follow Reply
Menu
Install the app
You are using an out of date browser. It may not display this or other websites correctly.
You should upgrade or use an alternative browser.
Hearts of Iron IV 38522 Bug Reports 10529 After Action Reports (AAR)
Previous dev diary Next dev diary
Show only dev responses

Diary time! Today, in the 7th diary, we continue showing off features in Man the Guns, but don’t worry - there are loads more coming! The topics for today both concern access.

Sea zone access
With MTG it will now be possible for players to mark sea zones as either Avoid or Banned. A zone marked as Avoid will be treated as dangerous and, well, something to avoid if possible. This goes for all ship routing. So if enemy submarines are decimating your shipping you will be able to route it elsewhere, perhaps somewhere safer and closer to an ally. Ships will still route through a zone marked as Avoid if there is no other way to get where they are going. 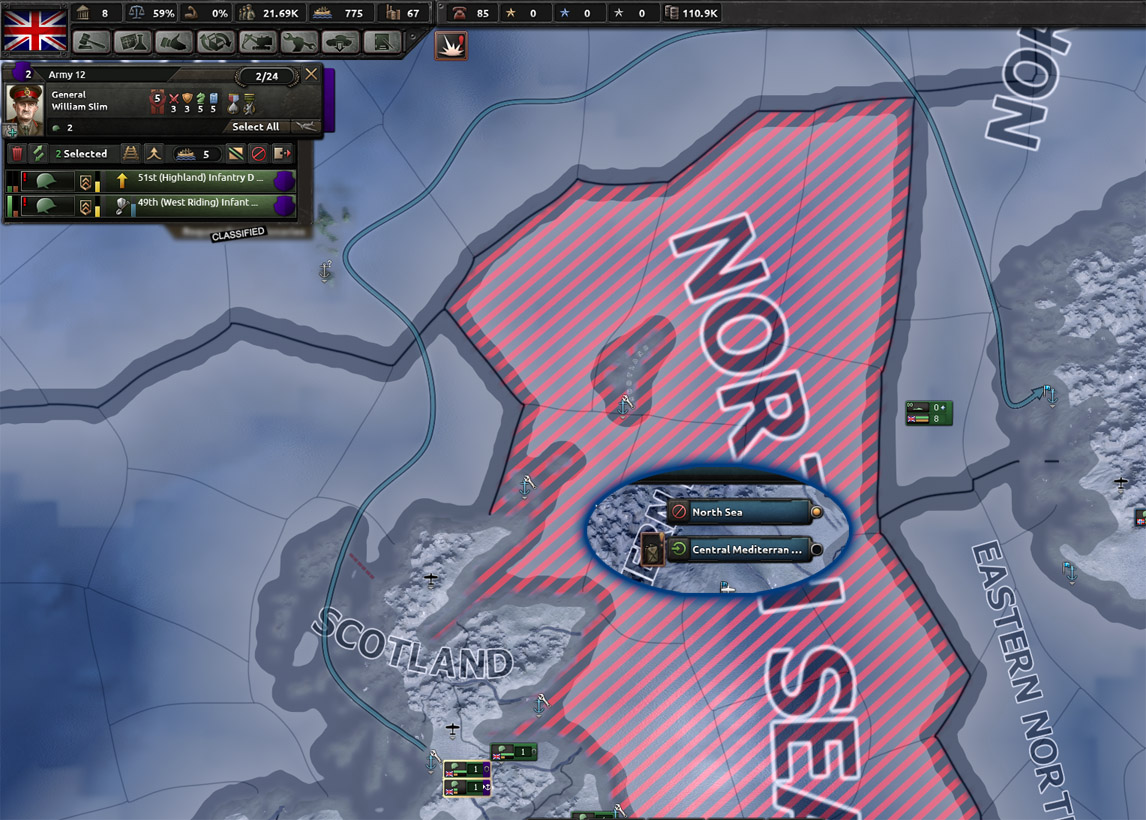 A Banned zone won't allow moving through it at all, except by manual player moves, or say if it’s an invasion order triggered by the player. It will for example even shut down trading if there are no other possible paths. Zone markings are shown in the naval mapmode and can both be toggled directly on strategic area alerts, or in the new “state view” for the sea. Here we also show a proper breakdown on the level of naval supremacy in the area much like you are used to for air zones instead of the old sparse tooltip. You’ll have to excuse my sneaky censoring as not to spoil a future topic however

At this point I am sure some aspiring u-boat captains are wondering why the enemy can’t just shuffle their shipping routes constantly to avoid being located and interdicted. Changing your route will put its efficiency at 0, so if you continuously change settings you won’t be able to move things through the route. That said, there might be some good strategy in sometimes changing things up to make it harder for the enemy to concentrate their raiders.


Docking Rights
Asking for or receiving Docking Rights are new diplomatic actions. They function like military access “light” and allow someone access to base out of, resupply and repair in your naval bases. In fact military access by necessity automatically comes with docking rights. Docking rights can give you better reach and avoid troublesome paths. For example, German subs will be able to operate out of Spanish ports (if permission is granted) and threaten British shipping in areas where defending them is trickier and they won’t have to pass through the channel or more guarded waters. 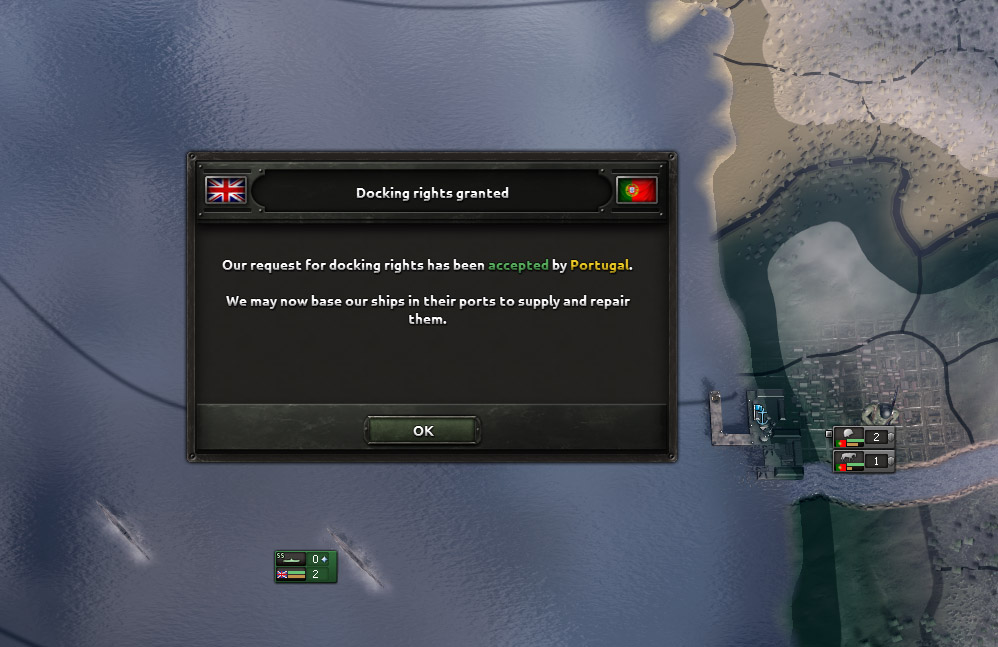 When it comes to repair and such you will be at a lower priority than the owner of the port, but you will have to wait for a future dev diary for more details on how the new repair system functions in detail. Ships in a neutral port that are there due to docking rights can not be attacked with aerial strikes on the base, so if you want to get rid of ships operating there you will need to draw the harboring nation into war also.

That’s all for this time folks. Tune in next week for a *cough* explosive update.

What will happen if you ban a seazone while submarines engage convoys in that seazone, will the battle continue or will the convoys simply disappear?

Question @podcat : If invasion orders still go through banned zones will there be some other way to get them to avoid some zones if other routes are available? (Bay of biscay)

looks really nice, hopefully subs will be updated too so I'll actually have to be concerned about them. Also love docking rights, the Soviets will actually be able to do naval things now.

What will happen if you ban a seazone while submarines engage convoys in that seazone, will the battle continue or will the convoys simply disappear?
Click to expand...

convoys can't exit combat, they're forever stuck until either side dies, so probably no.

a bit sad that teh seazone restrictions is not part of the free update.
like, i'l prolly buy MtG anyway, but more so for teh folks out there that won't.
Toggle signature
Stellaris wars should look a litle at how EU4 handles it
Money&HOI4: -something something Weimar Republic something something-

podcat said:
A Banned zone won't allow moving through it at all, except by manual player moves, or say if it’s an invasion order triggered by the player. It will for example even shut down trading if there are no other possible paths. Zone markings are shown in the naval mapmode and can both be toggled directly on strategic area alerts, or in the new “state view” for the sea. Here we also show a proper breakdown on the level of naval supremacy in the area much like you are used to for air zones instead of the old sparse tooltip. You’ll have to excuse my sneaky censoring as not to spoil a future topic however

Does the yellow triangle block trade but still allow fleet missions? To quote myself from the teaser thread:


Fulmen said:
Hopefully naval no-go zones apply to convoys as well. Ideally we'd get a toggle that allows other ships to go there, but not convoys. Think areas where you don't have complete naval superiority but still want your ships hunting the enemy, but also don't want your convoys going through there to get sunk.
Click to expand...

Great stuff btw, mechanics that allow for a more historical and realistic portrayal of the war are always welcome in my books.
Toggle signature
In 1939-44 the Finnish military caused Soviet Russia in total casualties 1.4-1.8M men, 3,200-3,500 aircraft and 3,500-3,678 tanks, at the cost of some 294k men, 240 aircraft and 50-70 tanks in total casualties to itself. This martial effectiveness coupled with the overwhelming materiel and manpower advantage the Russians enjoyed at nearly all times, makes it a unique achievement in history.

85% of the Soviet armoured vehicle park on 1.1.1936 is missing from HoI4 (updated to NSB)
Finnish metal & mineral production 1865-2002 (to-be-updated with excavation sites, their years of operation and possibly translating their locations to HoI4 & Vicky 3)

podcat said:
Tune in next week for a *cough* explosive update.
Click to expand...

Will the AI be able to use the restricting seazone feature effectively?
Toggle signature
Better Airzones for HOI4: https://steamcommunity.com/sharedfiles/filedetails/?id=1494516854

Can docking rights be granted to either side of a war? Let's say I'm Spain and GER asks me for docking rights and so does UK while they're at war with each other. Can I grant them both? Will they begin to fight each other in my ports or is it "neutral ground" and the German and British sailors meet in the next quayside bar to drink beer together?

Argh, censorship has me cringing for the wait next week
Toggle signature
"Alaska Is Canadian Territory!" - Me
“Will license leasing affect autonomy in Death or Dishonor?”- Me, the spammer on twitch streams
"Could you change integrated puppets to a similar colour to their overlord?" - Me during the Man the Guns release

Can't you already do it right now with military access? So both hostile fleets repair peacefully in the same port but as soon as they exit the harbor they fight each other in the neighboring seazone?
Never did it so I really don't know though.

How likely is the AI going to allow/deny access to the player.
And yes I do understand alot has to due with your relations but as of now one can have good relations but still be denied a request by the player from the AI.

Now what is this?

@podcat
I can understand knowing the Air superiority levels, as people can see the planes + radar etc. I can also understand roughly knowing the ship numbers close to shore, but out in the Pacific the sea areas are so large how would you know what's out there. Could this not be altered slightly so that Encryption/Decryption + closeness to shoreline + Radar have an influence on what you know.
Last edited: Aug 15, 2018

So what do we have here? Does it mean 2 subs (or non-capital) and 0 Capital Ships?