Jump to latest Follow Reply
Menu
Install the app
You are using an out of date browser. It may not display this or other websites correctly.
You should upgrade or use an alternative browser.
Hearts of Iron IV 40928 Bug Reports 11958 After Action Reports (AAR)
Previous dev diary Next dev diary
Show only dev responses

Hope you are all having a nice day. It's Wednesday, so that means it's time to roll out another dev diary. Today’s is going to be a bag of tricks diary covering several smaller features from Man the Guns and the 1.6 Ironclad free update. The large changes to naval things are occupying much of the team, so there will be a bit before I start giving you the details on that. But meanwhile, lets dip into some smaller, yet juicy features...

Faction Leadership
Being the leader of a faction comes with a much larger degree of control. Once someone controls a faction that you are in there has not really been any ways of taking over that control, except of course to leave and make your own.

With MTG we are adding a system for taking over that control, assuming you qualify:

To be able to take over leadership in the faction they are in, a country must: 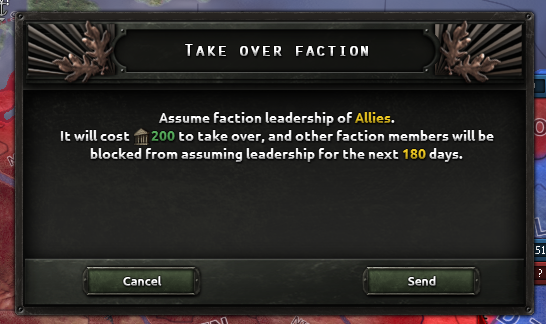 After paying a hefty amount of political power, and then the faction is yours. The faction leader will get an alert warning them if another country is close to qualifying so they can take steps to avoid it if they want to (AI will generally play fairly nice here), but it is also possible to see candidates in the war screen at any time. Ownership can only change once every 6 months to keep things stable and predictable. 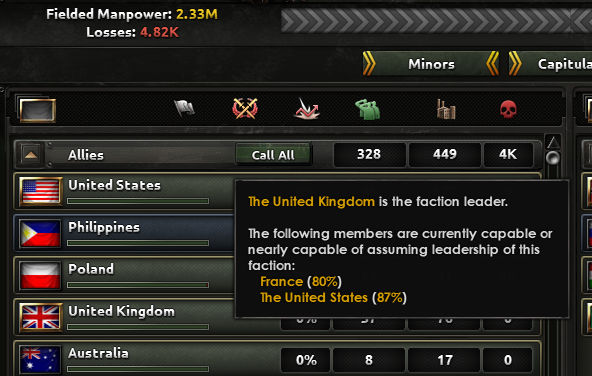 Sometimes you accidentally click that focus and then realize it wasn't at all what you intended, or the situation changed moments after you clicked. It doesn’t happen all that often, but when it does it can be very frustrating… so with 1.6 you will no longer be locked in and can cancel a focus and pick another (with a few exceptions). Some focuses that fire off event chains or would otherwise break by being canceled half-way will still be locked in (the game will warn you in a tooltip ahead of time). To be nice to misclicks we save a few days progress, but beyond that you won't get it all back if you change your mind, so you still need to think through the choice of focus properly. 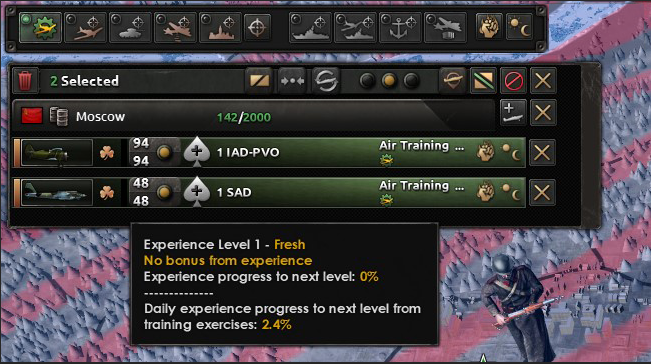 With fuel added to the game and a new repair system for ships (see a diary in the misty future!) we felt that there was now an argument for letting the player exercise their ship crews and air wings as well. Before there wasn't enough ability to model cost really. This means that you will be able to tell ships and air wings to go and exercise. This works a lot like training your land forces - your forces take some damage and consume fuel while gaining experience (and also generating some global xp). Just like with land troops, exercises can only train them to a certain level. Experience level on ships is nothing new, but for air wings it is. A trained wing will be performing better, and losing planes means you will be losing experience as well. It will be up to the player to decide how much training they can afford, and this will be heavily dependent on their access to fuel. Of course experience is also gained in combat as you would expect.

That's all for us this week, see you next week!


Rejected Titles:
- Learning from Experience: A Kamikaze Pilot's Life
- Getting into ship-shape
- Practising RAF-Pilot-Banter
- Pumping Iron: Scharnhorst Edition
- What do you mean a 20min theory course isn't enough to be a combat pilot?
- Luxemburg, the new leader of the axis!
- I will make a seaman out of you
Last edited by a moderator: Aug 8, 2018

Why don't you make it so that you can cancel a focus provided you haven't unpaused the game yet?
Toggle signature
In dealing with trolls, I have found reason to be useless, and ignore lists to be indispensable.​

safe-keeper said:
Why don't you make it so that you can cancel a focus provided you haven't unpaused the game yet?
Click to expand...

because not everyone pauses the game, and some effects fire when selected not when ticked. givign you 10 days is more flexible
Toggle signature
Reject reason to make the impossible possible!

“It’s why we must focus on our own well-being in the present,” Aslan said, “and build as many trains as we can before dying.”
“To trains,” Lucy said, and they all raised a meaningful glass.
B

podcat said:
- What do you mean a 20min theory course isn't enough to be a combat pilot?
Click to expand...

Would you need just one rusty destroyer to get (nearly) full naval XP from training, much like with land units?
Toggle signature
"War is the only way to maintain peace and save human lives", Valentina Matviyenko, 2022.

Whoa, Finally, Naval and Air Forces exercises! So excited!
Toggle signature
Der Adler, der Wolf, und die Sonne: Die Geschichte des Stahlpakts
The Eagle, the Wolf and the Sun: the History of the Pact of Steel; A Hearts of Iron 3: Their Finest Hour Historical AAR
Current Chapter:
XVII: OPERATION CHARAX: ITALY IN RUSSIA
The Regio Esercito does what Italians do best: Muck up their Invasions.
Awarded WritAAR of the Week, 01MAY18
"This must be the most creative and engaging research write-up I've ever seen in an AAR." @nuclearslurpee
The Inkwell​

Great dev diary and a lot of good addons honestly but can we expect releasable Mauritania?

Please add a mis-click guard of some kind for events, too. Some other Paradox games have this, whereby event options will not be clickable until two or three seconds after they pop up; I've lost count of the number of times I've missed an event or taken the wrong option due to clicking something else on the screen when the event had just popped up unexpectedly.

If you are the faction leader, do you have control of who enters a war, or are the only one who can call faction members in?

This would help prevent Italy from joining the war too soon, for example.


James Hale said:
Please add a mis-click guard of some kind for events, too. Some other Paradox games have this, whereby event options will not be clickable until two or three seconds after they pop up; I've lost count of the number of times I've missed an event or taken the wrong option due to clicking something else on the screen when the event had just popped up unexpectedly.

This would be a huge quality of life improvement @podcat !
Click to expand...

Now that air wings have individual experience, where do aces fit in?

luki1223 said:
Great dev diary and a lot of good addons honestly but can we expect releasable Mauritania?
Click to expand...

If I find the time, probably yes.

couldnt resist with that icon, its so sexy
Toggle signature
Reject reason to make the impossible possible!

“It’s why we must focus on our own well-being in the present,” Aslan said, “and build as many trains as we can before dying.”
“To trains,” Lucy said, and they all raised a meaningful glass.
D

- Learning from Experience: A Kamikaze Pilot's Life
Click to expand...

I laughed harder than I should have.

1) will air unit equipment be controllable by the player - i.e. can the player decide what model planes the unit should use?

2) will there be any way to transfer the experience of an air unit - e.g. will it be possible to change the unit type of an air unit like land units can change template?

Ta!
Toggle signature
Balesir.
======
I made a mod for Hearts of Iron IV, which you can read about here, originally called Waltzing Matilda (after a tank).

Bratyn said:
If I find the time, probably yes.
Click to expand...

@podcat @Bratyn ; when can we expect live streams to begin ? please answer . i just cannot wait for this game to come out , i would give 100 dollars to get it now for real

Love it
Toggle signature
Atrocity is recognized as such by victim and predator alike, by all who learn about it at whatever remove. Atrocity has no excuses, no mitigating argument. Atrocity never balances or rectifies the past. Atrocity merely arms the future for more atrocity. It is self-perpetuating upon itself — a barbarous form of incest. Whoever commits atrocity also commits those future atrocities thus bred.

For faction leader change, does the size of the navy count? Power projection should definitely be designed in the game at one point no? (peace conference, etc.)