Jump to latest Follow Reply
Menu
Install the app
You are using an out of date browser. It may not display this or other websites correctly.
You should upgrade or use an alternative browser.
Hearts of Iron IV 37735 After Action Reports (AAR)
Previous dev diary Next dev diary
Show only dev responses

As is traditional christmas time means 2 things: The dev team all disappear off on holidays and I make some beutifulhorrible holiday art... so, merry Christmas everyone! 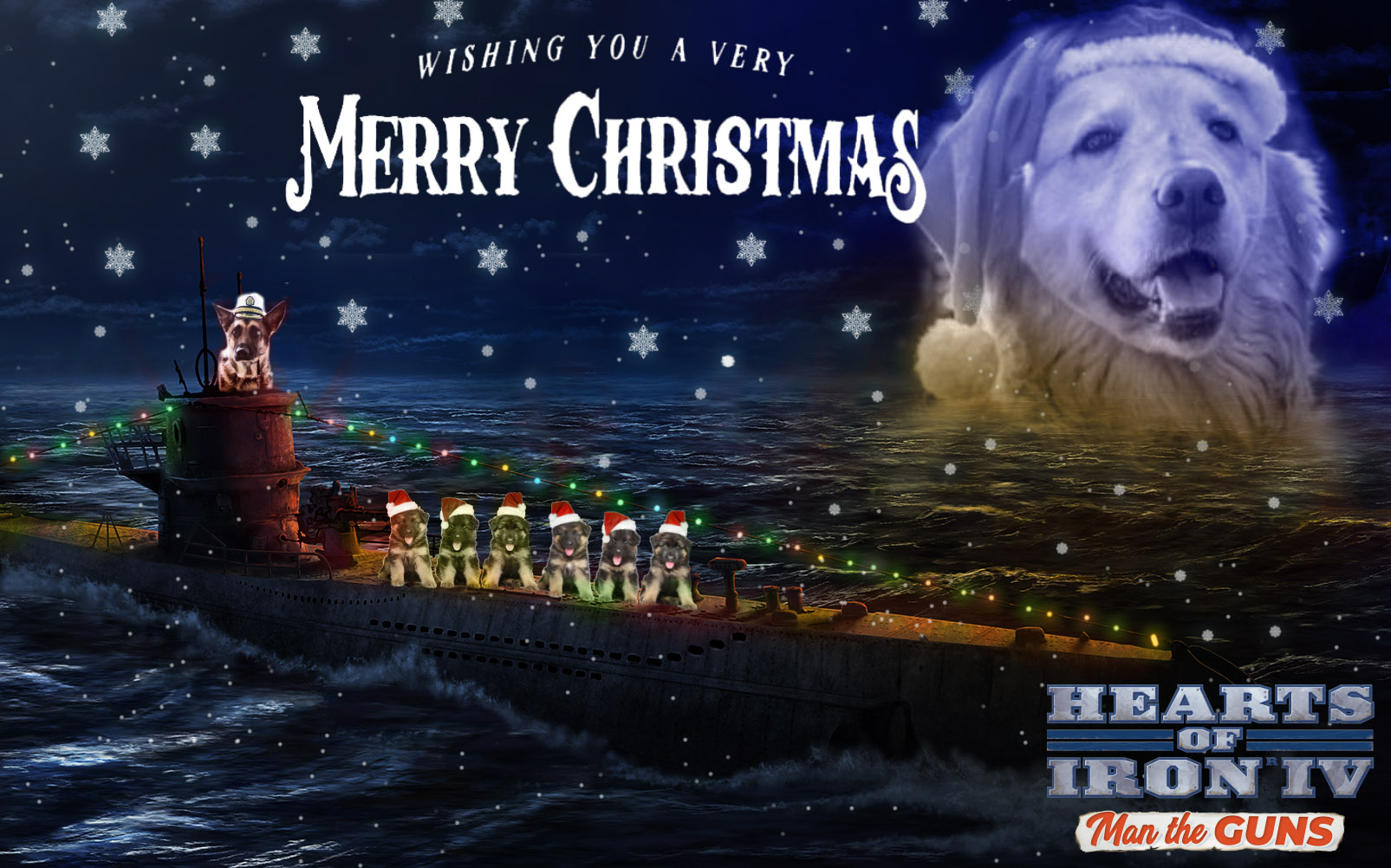 As I said we now go off on a much needed break, so expect diaries to resume again when we get back after new years

I figured I'd also give a little summary of the year from out point of view. This year saw the release of Waking the Tiger back in march which we are proud of and seems to have been received really well. Then during the summer we hit a new record on amount of active monthly users playing HOI (540k!!). Otherwise we have been hard at work on probably our most ambitious expansion yet - Man the Guns, which we announced (very early) at PdxCon. I expect a lot of people wanna ask me for a release date, but it is what it always is: when its ready. I can promise that we'll tell you early next year though.

As is customary I usually drop some cool statistics as well. so 'ere we go:

Oh yeah, we were pretty excited to hear that HOI4 had been nominated for the 2018 steam awards under Best Alternative History. I'm not gonna beg you to go vote at all. Totally up to you!

I also figured we'd highlight my 2 favorite bugs that have popped up during development. Smoke launchers let submarines lay down smoke to escape... somehow without revealing their position ;D also we had a great one where whenever we iterated on stats for a ship design it would double the stats of those modules, and also double the amount of module slots. @YaBoy_Bobby was the undisputed king of the seas in this abomination: 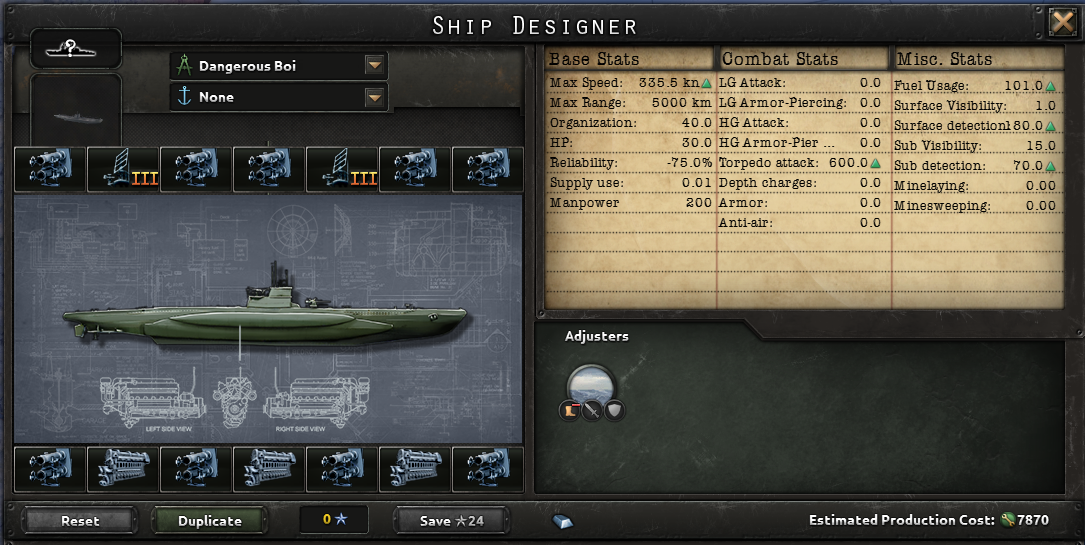 (its a while ago, so its an older iteration of the UI). I have no idea what -75% reliability mean, but I suspect it just explodes if you try to train with it.

See you all next year and have a merry Christmas and a happy new year - HOI4 Dev Team
Last edited: Dec 19, 2018

Merry Christmas to all you too!
P

Negative Reliability means that the boats procreate when in action

I hoped to see some art and Dutch bycicles battalions, but I can forgive anything because of that Santa Retriever.

Still no word on release, but it sounds like with bugs like that you still have a ways to go. As much as I'd love to be playing this right now, take as much time as you need so we can have a nice, polished release with a passable AI.

Merry Christmas and a happy new year to you all!!!!!

podcat said:
We broke all our player records during summer. I dunno if the weather was extra bad this year or not, but people seem to have been spending their vacation charging across Europe in tanks.
Click to expand...

Here in France our summer was extremely hot - we almost have no rain -. So it was better to burn tanks/ships/planes/countries in HoI4 in the confort of a room in the dark than burn our skin while going outside.
Toggle signature
Honi soit qui mal y pense - an English kingdom overhaul

I've had a great year in HoI. I've reformed Byzantium, conquered the world as Sinkiang, paradropped into Hungary as Australia and even done a - shock - historical playthrough.
I am also off on my winter break from today. Have a great rest and I look forward to hearing more about these manly men manning these manly guns.

Merry Christmas , looking forward to the announcement of the release date
Toggle signature
It's the world's most popular assault rifle, a weapon all fighters love. An elegantly simple nine pound amalgamation of forged steel and plywood, it doesn't break, jam, or overheat. It will shoot whether it's covered in mud or filled with sand. It's so easy even a child could use it, and they do.

podcat said:
I can promise that we'll tell you early next year though.
Click to expand...


podcat said:
I have no idea what -75% reliability mean, but I suspect it just explodes if you try to train with it.
Click to expand...

It probably just becomes a mushroom cloud as soon as it touches any water.
Toggle signature
My EU4 Mods:
The Internal Balance - A Stability and Factions Overhaul
The Balance of Power 2.0 - Reworking How Rivals and Neighbors React to Expansion Long Term
Slovak and Turkish Cultures Tweak

A few of my suggestions:
HoI4:
A way to improve AI in the field
Post-War Demobilization
L

@podcat failed to mention Paradox is up for best developer in the Steam Awards as well.

Merry Christmas to all the devs, enjoy your break!
Toggle signature
"There is no worse tyranny than to force a man to pay for what he does not want merely because you think it would be good for him." Robert Anson Heinlein

thanks Dev, Have a great holiday at the end of the year.
Toggle signature
Steam Profile https://steamcommunity.com/id/AnastielBR
​

So no stream today
Merry Christmas and happy new year to Hoi team and Paradox.
Hopefully we can see early February or late January release.

Ethereld said:
I hoped to see some art and Dutch bycicles battalions, but I can forgive anything because of that Santa Retriever.
Click to expand...

I got a whole diary planned showing off all the art and awesome music thats gonna be in MTG also
Toggle signature
Reject reason to make the impossible possible!

podcat said:
I have no idea what -75% reliability mean
Click to expand...

"You will not argue with, comment on or question the actions/authority/ or comments of the Paradox staff (Administrators, Moderators, etc.) in a public forum. Should you wish to do so you are directed to contact the Paradox staff via PM" - Forum User Agreement & Rules

podcat said:
I got a whole diary planned showing off all the art and awesome music thats gonna be in MTG also
Click to expand...

Great to know, can't wait to hear the new music.

Merry Christmas to all the team