Jump to latest Follow Reply
Menu
Install the app
You are using an out of date browser. It may not display this or other websites correctly.
You should upgrade or use an alternative browser.
Hearts of Iron IV 40927 Bug Reports 11958 After Action Reports (AAR)
Previous dev diary Next dev diary
Show only dev responses

Hi everyone! We are now back from PdxCon which was an amazing experience. If any of you were there, thanks a lot for coming! I had a lot of fun and interesting conversations with HOI fans and we had a very cool challenge to as Poland inflict as much casualties as possible on Germany in 1939 in just 30 minutes. The winner (all glory to @Zwireq, AKA Zwirbaum) pulled off 1.8 million using clever tactics and a strong cavalry army! What better way to save Poland than to turn the false myth of the polish cavalry charging German tanks around 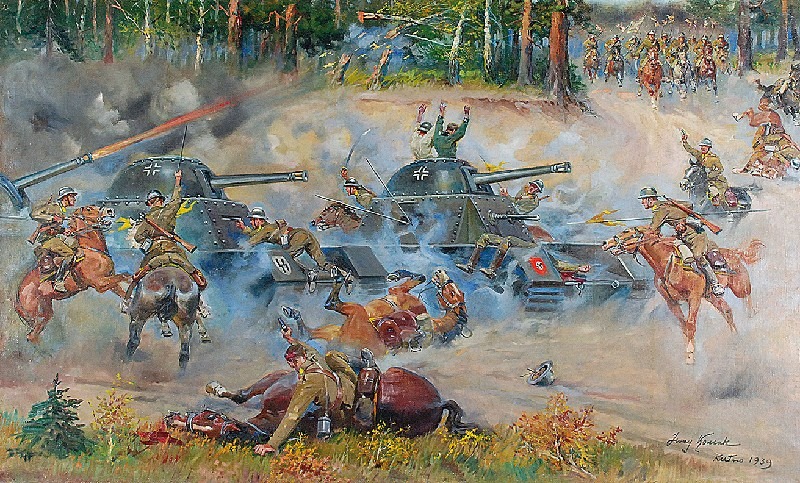 The myth itself is something based on reality where polish cavalry performed a successful charge early on in the war vs German infantry at the battle of Krojanty. Something the German propaganda machine tried to falsely portray as the poles being unprepared for meeting modern German armor (there were no tanks there). The myth apparently lived on a long time, notably taught in schools and promoted in soviet propaganda… that said, in Hearts of Iron IV at pdxcon the polish hussars did ride out and win! 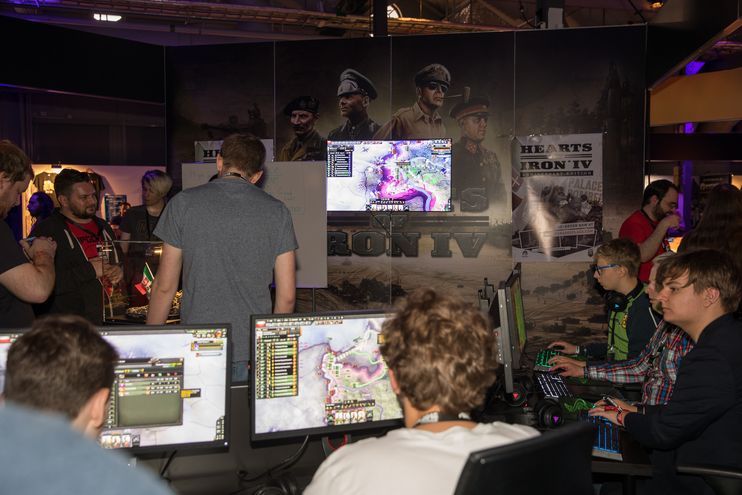 The HOI4 booth where we ran the challenge.

We also announced the next big expansion for HOI: Man the Guns. 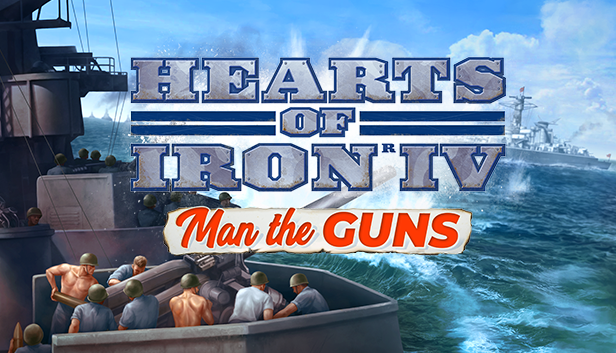 Man the Guns will focus on naval warfare primarily but also redoing UK and USA and giving them more fun options. There will also be other new focuses but those are secret for now. We will also be adding fuel to the game which a lot of people were very excited to hear about at pdxcon

The UK and US revamps we plan to handle the same way we did Germany and Japan, e.g the changed trees and historical path in the 1.6 'Ironclad' update and the new alt-history paths (despite my perhaps not so subtle hints people have figured out that there is going to be the possibility of a 2nd american civil war among other cool things).

As for the themes we decided to go with naval for several reasons. One, that it fits very well with USA (and they were on the top of our list of nations we felt needed more fun gameplay). Secondly we have already done big changes to both land and air in previous expansions and updates so it was time for the 3rd type of warfare to get its time in the spotlights. Its also currently in my opinion the weakest part of HOI and something we really want to make shine.

We are currently very early in development so things may change, but here are some things mentioned we are aiming to do (in expansion or free update or mixed):
- Ship design and the ability to refit older ships and keep things up to date
- Naval Terrain: different seas will behave differently and suit different ships and fleet compositions
- Revamped naval combat
- Fleets split up into task forces for better control
- New naval spotting system
- Ability to control naval routes and block areas you dont want units to travel through
- Fuel, obviously going to be a massive balance job for us and a big gameplay change for you
- Gameplay rules, particularly to help multiplayer groups out when it comes to manage their games
- of course other stuff as well. to be revealed in the future.

We don't have a release date yet, and most of the above is still subject to change because we are are still early. I really wanted to talk as much as possible about what we are up to at pdxcon though Hopefully I will see more of you next year there!

We also announced that HOI4 has hit 1 million sales (wooot), and to celebrate that we have decided to make an anniversary edition that comes with a super cool alt history diorama - Italian soldiers raising the flag over the rubble of Big Ben, Iwo Jima style . I felt italy invading London was one of the more hearts of iron things there was when it comes to alt-history 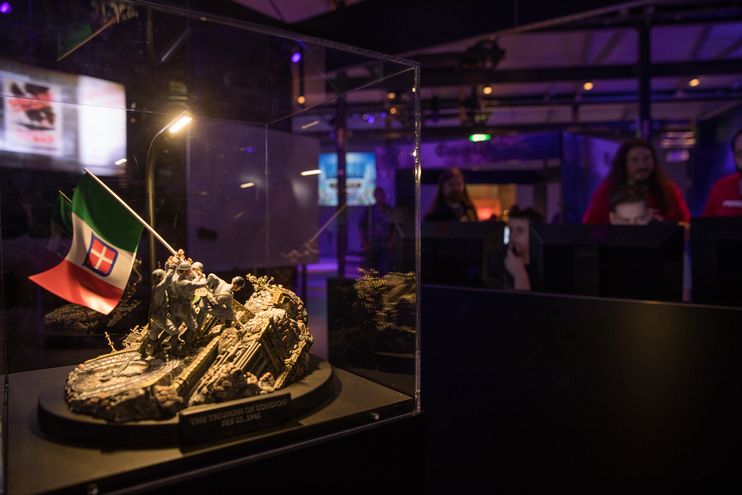 We had the first version for PdxCon in the booth fresh from the maker, and you can see it there in the picture above. The anniversary edition is actually possible to preorder already! Just follow this link. Juffo-Wup fills my fibers and I grow turgid.

All great changes. The US tree definitely needs improvement, but I always felt UK had the best tree of all the ones that came out at launch. I hope an overhaul for France is in the works too.

Hey, this sounds amazing, and I can't wait to get at it. Just wish that the preorder was on Steam where I have funds in my account...
Toggle signature
Der Adler, der Wolf, und die Sonne: Die Geschichte des Stahlpakts
The Eagle, the Wolf and the Sun: the History of the Pact of Steel; A Hearts of Iron 3: Their Finest Hour Historical AAR
Current Chapter:
XVII: OPERATION CHARAX: ITALY IN RUSSIA
The Regio Esercito does what Italians do best: Muck up their Invasions.
Awarded WritAAR of the Week, 01MAY18
"This must be the most creative and engaging research write-up I've ever seen in an AAR." @nuclearslurpee
The Inkwell​

Congrats on the 1M sales! I look forward to learning more about the USA focus tree and how fuel will work in the coming diaries!
Toggle signature
Yep.

Are the gameplay rules planned to be multiplayer only or singleplayer will may used it too?
Thank for your hard work!
Toggle signature
HoI4 mod : France Total Rework

Just post photos of doggies weekly with the mood you are in for the progress you made in the week. With not additional context, and don't call them Dev Diaries.

I like it so far. Can't wait to see what other countries will be worked on.
Also, do you plan on giving to admirals the same experience system that you gave to the generals and field marshalls?

Any comments on the naval air zone / naval bomber weirdness people have been reporting for weeks without any acknolwedgement from Paradox?

There have been like a dozen threads about these issues with many people wondering if there will be a patch before Ironclad.

Would the Devs mind taking a minute and reviewing the topic in this discussion and providing your own reasoning and philosophy in accordance to the discussion? Its getting some traction and it does seem something of note to address. Would appreciate it Paradox. Thanks.

I love the sound/idea of this however
I'm fearful this will be a total and complete nightmare not only for humans but the AI as well. I can see so many issues here. The rest I like however this one scares me.
Toggle signature
I have an affection for a great city. I feel safe in the neighbourhood of man, and enjoy the sweet security of the streets.
(Henry Wadsworth Longfellow)
In Rome you long for the country; in the country – oh inconstant! – you praise the distant city to the stars.
(Horace)
Almost two thousand years apart, two revered poets comment, with reference to timeless qualities of city life.

I guess it will be like galleys being better in inland seas in EU4?

Voigt said:
Just post photos of doggies weekly with the mood you are in for the progress you made in the week. With not additional context, and don't call them Dev Diaries.
Click to expand...

"Dev Dogries™".
Toggle signature
"It is well known that nothing is such thirsty work as the acquisition of knowledge."

Hopefully the multiplayer improvements would include a peace deal turn timer.