Jump to latest Follow Reply
Menu
Install the app
You are using an out of date browser. It may not display this or other websites correctly.
You should upgrade or use an alternative browser.
Hearts of Iron IV 40924 Bug Reports 11957 After Action Reports (AAR)
Previous dev diary Next dev diary
Show only dev responses

Hi everyone and welcome back to another dev diary for La Résistance. Today its time to cover the art and music part of the expansion plus showcasing some of our new historical operatives. I will also be sharing the rest of the diary schedule until release. Enjoy!

Music
Let's start here so you can listen to some samples while you read!

For La Résistance we got 4 new tracks:
“Imperterrita” - Our Spanish theme song. Really good buildup tune that I think will also fit well to the spanish civil war.
“A Storm Coming” - Kinda classic HOI4 axis-y march tune we use at war and for nations going fascist.
“Liberté, Égalité, Fraternité” - Our french theme song. A great song for democracies with plenty of drums.
“Cloak and Dagger” - The “spy tune”. We play this when players are doing sneaky stuff. It's a pretty slow tension/thriller tune. 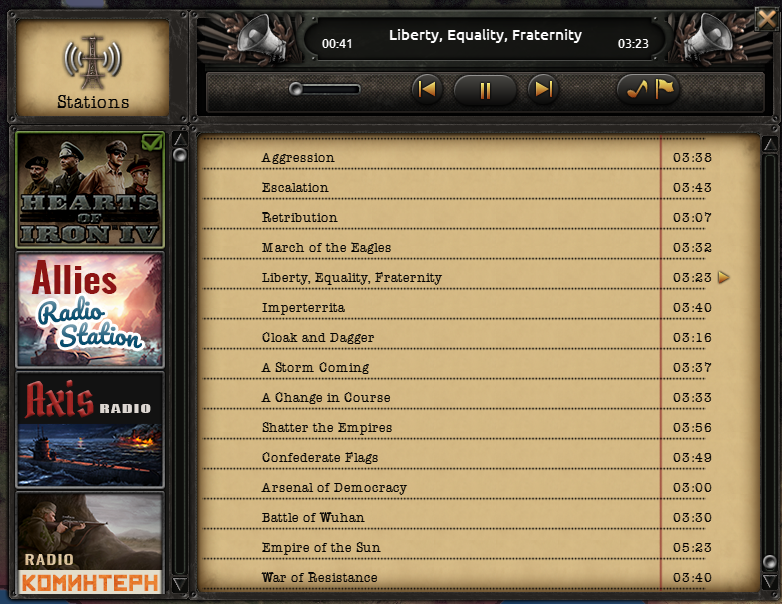 Art
Hi! We are artists on Hearts of Iron team, Irene and Albina and we want to tell you a bit about the production of 2D assets..
Since we are focusing on France, Spain and Portugal in this expansion, we have added portraits of generals, admirals and political leaders from these countries. These portraits were created by a number of different artists including us, Celine and Ahmed. Here is some picked favorites: 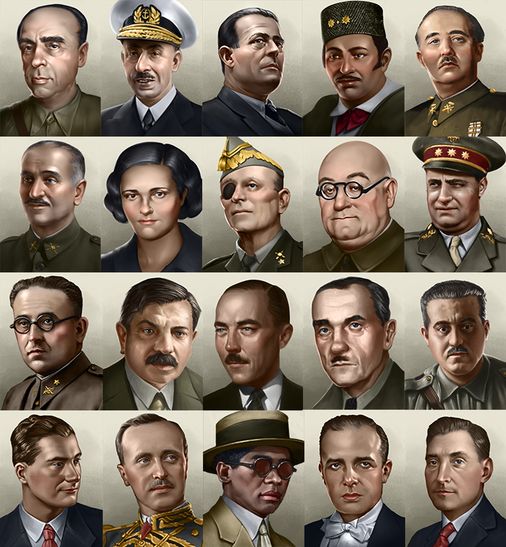 Two of them are illustrations of Military Junta and The Anarchist Commune, two committees that represented opponent parties in the Spanish civil war. It was challenging and interesting to work with leader portraits that are a bit unusual! 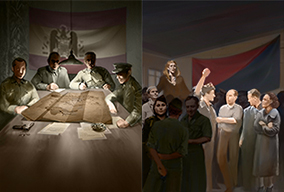 Our new feature - spies. We have made a lot of portraits of them. Male and female operatives of different nationalities, ages (and attitudes ). You can see that the operatives share some outfit details, like glasses, suits and so on. In order to create the amount of portraits needed for this expansion we tried a new system of 2D modular portraits. As the system was new we took a bit of a risk but we feel it paid off in the end. Some of the biggest challenges were to create elements in the same camera angle and lighting conditions so they could be switched easily. In the end it turned out to be really fun to play with this character creator! 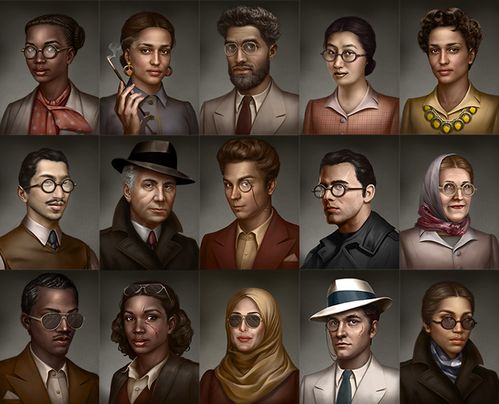 When it comes to unit models we already showed off both our armored cars and scout planes, so click those links if you wanna see more than the below sample:

Historical Operatives
As part of La Resistance, we wanted to highlight some of the most famous agents that were active during the period. There are quite a few of them, but here is a list of personal favorites:

Perhaps the most famous German small-unit leader of the war, Skorzeny was involved most famously in the German raid to liberate Mussolini (also available as a historical operation under the right circumstances!). Beyond that, he was involved in a number of other operations.

A French woman who gathered intelligence on the German V-weapon program through work in a French company supplying war material to Germany. Her reports led to the Allies becoming aware of the V-2 development taking place in Peenemünde and the allied air effort to destroy the site. She was later captured, but survived the war.

A triple agent working for MI6, the Abwehr, as well as the Yugoslavian government-in-exile, he fed misinformation about D-Day to his German handlers, who were completely convinced that he was working for them. In between, he apparently chased a lot of tail and his lifestyle served as inspiration for Fleming’s James Bond (not to be confused with James Boned, who is inspired by Daniel).

An American-born Frenchwoman, she would use her considerable fame as an entertainer to gain access to high-ranking diplomats and relayed secret information she overheard at parties to the French intelligence service. She smuggled notes about German troop movements written in invisible ink on her notation or pinned in her underwear.

A native of New Zealand, the Fall of France found her, unfortunately, in France. She quickly began organizing an escape network for shot-down allied pilots before the Gestapo closed in on her and her husband. While she narrowly managed to escape to Spain, her husband was not so lucky. She later returned to France to organize the resistance, taking part in an unsuccessful uprising of the Marquis.

Upcoming diaries
As release approaches the dev diary content is getting pretty locked in so I figured I might as well show you the schedule so you know when topics will pop up (and so you can stop asking me for when we talk about AI and bugfixing… seriously guys it's pretty much always the last 2 diaries ;D). Here goes:
5/2 - Achievements
12/2 - Spymaster AAR
19/2 - AI & Feature changes
21/2 - Full Patchlog, Balance & Bugfixes
25/2 - Release!!!

That's it for today, don’t miss our stream at 16:00CET where yet again the anarchists will take over and continue showing Spain.
Last edited: Feb 4, 2020

Good afternoon,a question about the new music,is one of this the one used in the announcement trailer of La Résistance or not at all?I hope you have included it since this music is awesome in my opinion.

Hmm, interesting. Out of the five new tunes there are no explicit communist songs. Maybe that's because the next expansion will feature a whole bunch of them if you know what I mean

Also, there's talk of a character creator used for spies. In what state is it? Is it just a tool to speed up (but not finish) content creation work or could it be implemented either in-game or as a standalone program for use by modders, creative spirits or you know people who want to recreate the stoning scene from Life of Brian? ("Are there any women here today?")
Toggle signature
I am of the belief that historical strategy games to a greater extent should base themselves on fiction, fantasy and the lord, RNGesus.

For where is the realism in already knowing the crucial details which shaped past eras?

That said, if I want to play as a colonizer of the new world, I can see a certain value in knowing that it indeed does exist.

Still hoping some Spanish sprites show up at some point for infantry.

where are Spanish models?

How do you get the Military Junta portrait for Nationalist Spain? Does it require having Franco failing to take control?

So do Spain and Portugal not have new unit models for infantry, I can't tell from the dev diary.

I just hope every spanish path, gets its own Achievment.
Also I wonder on which number for the PDXcon challenge achievment you compromised.

Character creator, I hear you say?
Toggle signature
My EU4 Mods:
The Internal Balance - A Stability and Factions Overhaul
The Balance of Power 2.0 - Reworking How Rivals and Neighbors React to Expansion Long Term
Slovak and Turkish Cultures Tweak

it is a hard chinese new year here in Hong Kong, still stuck in home to let the coronavirus crisis blow over a bit
But it is always great to see HOI team providing more content for us!
cant wait to read the AI change on 12/2

Will there be Richard Sorge and Witold Pilecki among the operatives?
Toggle signature
PDS Cold War strategy supporter.
#SaveImperator
My HoI IV musical mods — a lot of historical martial and popular music for the US, Spain and the USSR!
https://steamcommunity.com/workshop/filedetails/?id=2008132239

the spy art is mesmerizing, is noticeable u guys was inspired doing this art.

im also anxious to pickup a portrait of that ugly admiral(the 2nd portrait top left to right) to use on forums.

i also remembered to make a portrait of honorable Mrs Salazar to have on my desk.,

Krey_Lollipop said:
Also, there's talk of a character creator used for spies. In what state is it? Is it just a tool to speed up (but not finish) content creation work or could it be implemented either in-game or as a standalone program for use by modders, creative spirits or you know people who want to recreate the stoning scene from Life of Brian? ("Are there any women here today?")
Click to expand...

By creator we mean that we had a bunch of photoshop layers to play around with, not a tool


Falkenhayn1 said:
Will there be Richard Sorge and Witold Pilecki among the operatives?
Click to expand...

We got Sorge. Witolds name is among the random choices we got at least
Toggle signature
Reject reason to make the impossible possible!

I just noticed that, on the bottom row, right besides Salazar's picture, the portraits are of Pedro Henrique of Orléans-Braganza, and Arlindo Veiga dos Santos. Both were proiminent Brazilian figures...

So where are they going to appear? In Brazil, or as generic portraits? Notice that Pedro was the rightful heir to Brazilian throne, so it's kinda strange to see him as a generic face, especially in another nation
Show hidden low quality content
You must log in or register to reply here.
Share:
Facebook Twitter Reddit Tumblr WhatsApp Share Link
Top Bottom