Jump to latest Follow Reply
Menu
Install the app
You are using an out of date browser. It may not display this or other websites correctly.
You should upgrade or use an alternative browser.
Hearts of Iron IV 42546 Bug Reports 13331 After Action Reports (AAR)
Previous dev diary Next dev diary
Show only dev responses

Hello and welcome back for the first dev diary of 2019! Today we will update you on the state of fuel as well as show you a little something many people have wanted for a long time.

Changes and Updates to the Fuel Implementation

When the game launched, oil was used as other resources for the purpose of production. This was an abstraction done for fuel consuming equipment. We have removed this abstraction but are still using a simplified version of what happens in the real world. Oil refining was and is not as simple as simply processing it into a multipurpose “fuel,” but we felt that this simplification was necessary for gameplay and consistency of depth of detail.

We have added fuel as a resource to the top bar. With this UI element we convey a few bits of information. The numbers show the amount of time you have before being full or dry. Here the number is green and indicates that the stockpile will be full in 361 days. The numbers will become red if fuel is being lost. The green bar indicates the state of the stockpile, showing how full it is. The arrows indicate that fuel is currently being gained.

Oil is still traded as it was previously but is no longer used in any production. Instead, excess oil is converted to fuel at an hourly rate. The trade UI has had some slight updates to take this into account. What was formerly the “production” category is now “need.” Oil now has special subcategories of this section. Active need and potential need are now represented with “A” and “P,” explained more thoroughly in tooltips. This helps give the player an understanding of how much oil needs to be traded if they wish to try and cover their current fuel needs with a constant supply from oil refining.

Refineries have also been changed from giving Oil resources to giving hourly fuel. This both makes more sense from a historical perspective and makes it easier to control how much resource is produced by refineries. Previously, tech increases could only allow for a minimum increase of a single unit of oil. This gives developers and modders much better granular control over the output of a synthetic refinery.

For countries that will not have enough fuel production during wartime to meet their needs, developing a healthy stockpile is an option. Most nations will not start with a large stockpile capacity. Stockpile potential will be reduced by economy laws for many nations. Also, increasing stockpile capacity requires some investment, and will take space away from industry through the production of silo facilities. Japan is a good example of a nation that may run into a situation during the war when their usage far outstrips their potential fuel gain, so they will need to have a decent reserve of fuel if they want to fight the US in the Pacific.

The logistics support company has also been changed and will help with keeping your armor fuel usage more manageable.

When Hearts of iron 4 was released, it featured a very large number of possible battalion types that you could use to design your divisions. However, there were a few unit types that were pointedly absent. For example, if you wanted to make a motorized infantry division that was a faster version of your regular infantry division with line artillery - you couldn’t, unless you were okay with slower speed.

Part of the reason for this was the feeling that a motorized artillery unit didn’t have enough of a drawback to be a meaningful choice - it would just be better than regular artillery, and the added cost of a handful of trucks was not a major issue if you were building trucks anyway.

With the addition of fuel, that has changed. Now it is a long-term decision to motorize more of your force, and it requires more planning as your army suffers increasing penalties if you can’t meet fuel demands. So we decided to add motorized artillery units in regular artillery, rocket artillery, anti-air and anti-tank flavors. They are, by and large, identical in firepower to their horse-drawn versions but require 50 trucks each, have a roughly 50% bigger supply footprint and, of course, require fuel to run properly. 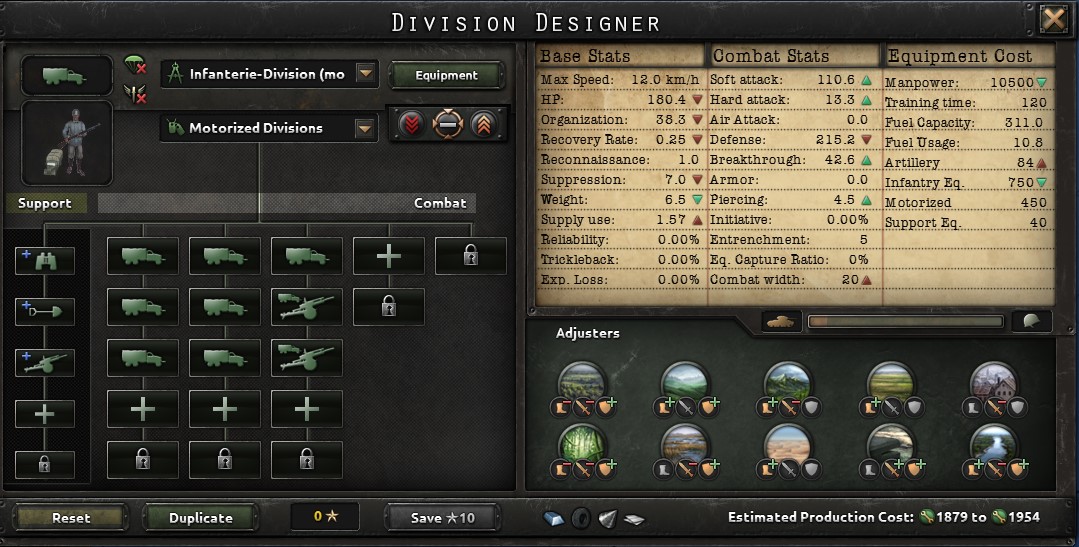 No special tech is required to unlock motorized artillery; having motorized equipment and the respective artillery type researched also unlocks the motorized unit.

That’s all for today, tune in next week when we talk about changes to research and show off the new naval tech tree!
Last edited by a moderator: Jan 9, 2019

No rejected DD titles this time. I'm fueling a bit sad
Toggle signature
~Proud and Acknowledged member of the Paradox Fanboi Squad~
*-Fanatical Supporter of the Anti-Entitled Gamer Society-*​
"Guys, what if I told you that video games can be enjoyable without a Serbian attention to map detail?" - Comrade Chaos
"I'd like to apologise to anyone I have not yet offended. Please be patient. I will get to you shortly." - Kadanz

Will the stockpile be fuel only, or will we be able to stockpile other resources in this, or another update/dlc?

I wonder how fuel consumption is affected by "active" units. In other words, units engaged in movement or fighting. Do they use more fuel, or would that complicate the system too much? I'd be a little paranoid about my usage rates if I had to worry about that. There's a trade-off between realism and fun somewhere in there.

It is more reasonable.

Right, I was hoping for something, like "Making artillery cool again, one truck at a time" at the least.
Do we have a release month for Man the Guns, or is it still SOON™?
Toggle signature
Shared hatred is the glue that binds friendships together.

Fuel lookin good so far! And thank God now i can finally stop using motorized rockets as artillery!
Did Motorized Infantery get some buffs now that they consume fuel?

So no more quantity*8 trading? Is it correct? Was this known?

$ilent_$trider said:
Right, I was hoping for something, like "Making artillery cool again, one truck at a time" at the least.
Do we have a release month for Man the Guns, or is it still SOON™?
Click to expand...

Making artillery cool again, one truck at a time.
Happy?

I don't want to be fussy, but isn't 'mechanized artillery' another word for SPA, which are included since v1.0?
Last edited: Jan 9, 2019
Toggle signature
no signature - no legal consequences

fellaz007 said:
I don't want to be fussy, but isn't a mechanized artillery another word for SPA, which are included since v1.0?
Click to expand...

Technically, in a historical sense, yes. But what is represented in game is tank based not mech based. Both Germany and the US (not sure about others) had a wide range of Half-Track based SP-Artillery and AA (not so much on AT).
Toggle signature
I am an American, not a United Statian, United Stater, USAian or any other PC alternative, live with it.
Show hidden low quality content
You must log in or register to reply here.
Share:
Facebook Twitter Reddit Tumblr WhatsApp Share Link
Top Bottom