Jump to latest Follow Reply
Menu
Install the app
You are using an out of date browser. It may not display this or other websites correctly.
You should upgrade or use an alternative browser.
Hearts of Iron IV 40897 Bug Reports 11941 After Action Reports (AAR)
Previous dev diary Next dev diary
Show only dev responses

Comrade @podcat is at a conference in which he will be fed free sandwiches. Any rumors of a coup are Stellaris propaganda. While he's gone, I'll be writing today's devdiary instead.

For those of you who don't know me, I'm Pallidum. I've been at Paradox for almost five years and most recently joined the HOI4 team in October last year as a game designer. Being part of this team is very exciting for me as what got me into Grand Strategy Games in the first place was the very first Hearts of Iron. Since then I’ve logged several thousands of hours in the series.

Enough about me though, let's talk about the topic of today's dev diary instead. Names! Or, rather the lack of them.


A very subtle detail that I'm sure most of our fans have missed is that some of the division names in the game are occasionally not entirely historical. The initial OOBs at the start of the game are fine, but the astute observer might have noticed the occasional "23. Infantry Division Type 6" or two.

To be blunt, we’re not entirely happy with the names that are being generated for new divisions. It doesn’t look very good and to to be honest, they can be a bit immersion breaking. It has been bugging us just as much as I’m sure it has been bugging many of you.

Fortunately, we're now getting around to doing something about it. 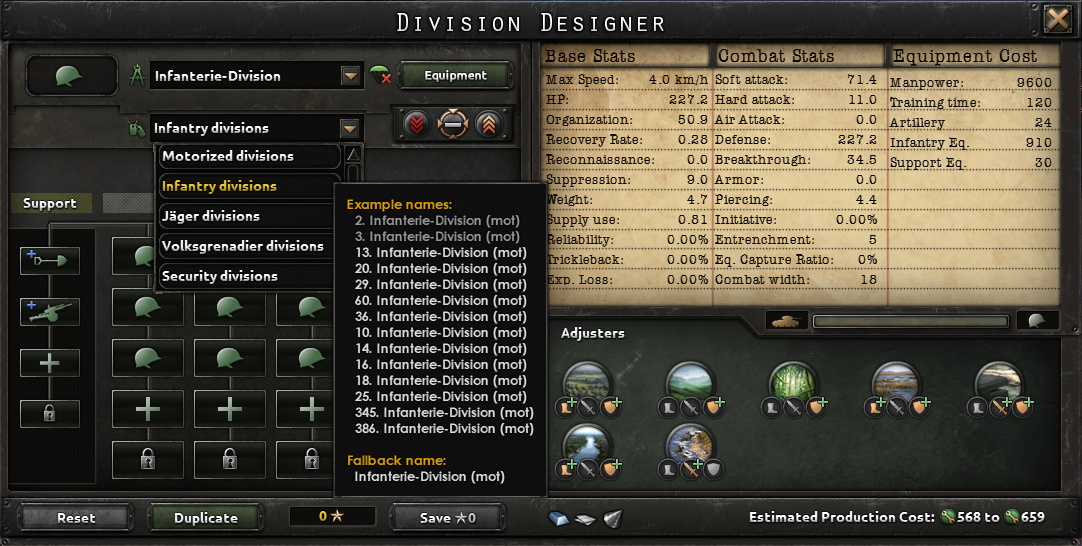 Each of your division templates will be able to choose a namelist. The namelist contains names of historical divisions for your country. Any new divisions created from this template will use a name from this list instead of the generated names. You’ll be able to get names such as the US 8th Infantry Division “Pathfinder”, or the German Panzergrenadier Division Großdeutschland.

The namelist also contains division numbers and these can be shared between several namelists. The game will try to ensure that divisions numbers don't overlap, even across different templates. What this means is that if you already have ten infantry divisions a new motorized division that shares the same numbering scheme will now be the 11th division. You'll no longer have to end up with "2. Infanterie-Divison", "2. Infanterie-Division (mot)" and "2. Infantry Division Type 12" in the same army.

Changing the template of a deployed division will also take this into consideration. The division will keep its number as long as it's available and will be renamed to the appropriate name for the new template. An example of this is the German 36th Infantry Division which was reorganized several times throughout the war, as shown below.

Choosing a new namelist for an existing template will rename all divisions using that template. As in the above example, divisions will retain their numbers if possible but get new names. The exception is for divisions that have been manually renamed by the player. They'll never be automatically renamed.

The namelists are, of course, fully moddable. I'm sure that this will be used in moderation and that no modders will go overboard with representing historical division naming schemes and reorganizations to far, far larger extents than we are able to cover. 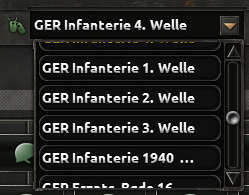 A nice flavour addition for sure. The fact that the name changes with the template is a nice touch.
P

Can we choose empty namelist, for those of us who believe that <number>division_type naming is informative, and "historical names" are needless?

Nice feature. Seems to be well thought out.

Pallidum said:
... I'm sure that this will be used in moderation and that no modders will go overboard with representing historical division naming schemes and reorganizations to far, far larger extents than we are able to cover...
Click to expand...

Obviously. Because absolutely nobody here has OCD tendencies.

Question on this - will changing the namelists modify checksum? (i.e. Will it be possible for people to swap in new namelists for immersion without it affecting their ability to play Ironman and get Achievements?)

But what about brigades naming? Can they have parallel naming to division naming? Or by default all units are divisions.

I, for one, welcome our new Pallidum overlord.

Will this be free patch or expansion feature?
Toggle signature
A conqueror is always a lover of peace, he would prefer to take over the country unopposed.
-Clausewitz

I don’t think I’ll ever use this. All infantry will continue to be called ‘40 width marines’ or ‘garrison’.

Oh! That is what I was hoping for since release. Thank you very much, dear PDS.

First few games were a Renaming Hell for my poor brain. Than I've learnt to ignore names completely. But now - Rejoice!

The most exciting feature of the DD! Capturing equipment from combat actions confirmed!

pommiebastard said:
Question on this - will changing the namelists modify checksum? (i.e. Will it be possible for people to swap in new namelists for immersion without it affecting their ability to play Ironman and get Achievements?)
Click to expand...

I'll have to get back to you on that. It's definitely on the wishlist, but I can't promise anything before I check with people who are smarter than me.

Can we see differences between AI nations as well or is this for Player only? Let's say we installed a mod which adds Most or all nation division names. Could we see these on combat log?

Very good addition, all these small bits help lots for immersion
Happy! Can't wait for next week, I hope a bigger feature or more news will be presented then.

Sounds pretty cool!
Toggle signature
Closed the Gates of Hell by filling it with cows!
"You get what you pay for" simply does not apply to computer games.

e: although we were promised GIFs in the plural, so now I feel cheated

- words will be involved
- language will be English
- there will be animated gifs
Click to expand...

Toggle signature
Flying Saucers and the Socialist Future of Mankind
"We do not have a fantasist or idealist position with regard to flying saucers. We must appeal to the beings on other planets, when they come here, to intervene and collaborate with Earth’s inhabitants in suppressing poverty."
http://steamcommunity.com/sharedfiles/filedetails/?id=1156789523