Jump to latest Follow Reply
Menu
Install the app
You are using an out of date browser. It may not display this or other websites correctly.
You should upgrade or use an alternative browser.
Hearts of Iron IV 41310 Bug Reports 12230 After Action Reports (AAR)
Previous dev diary Next dev diary
Show only dev responses 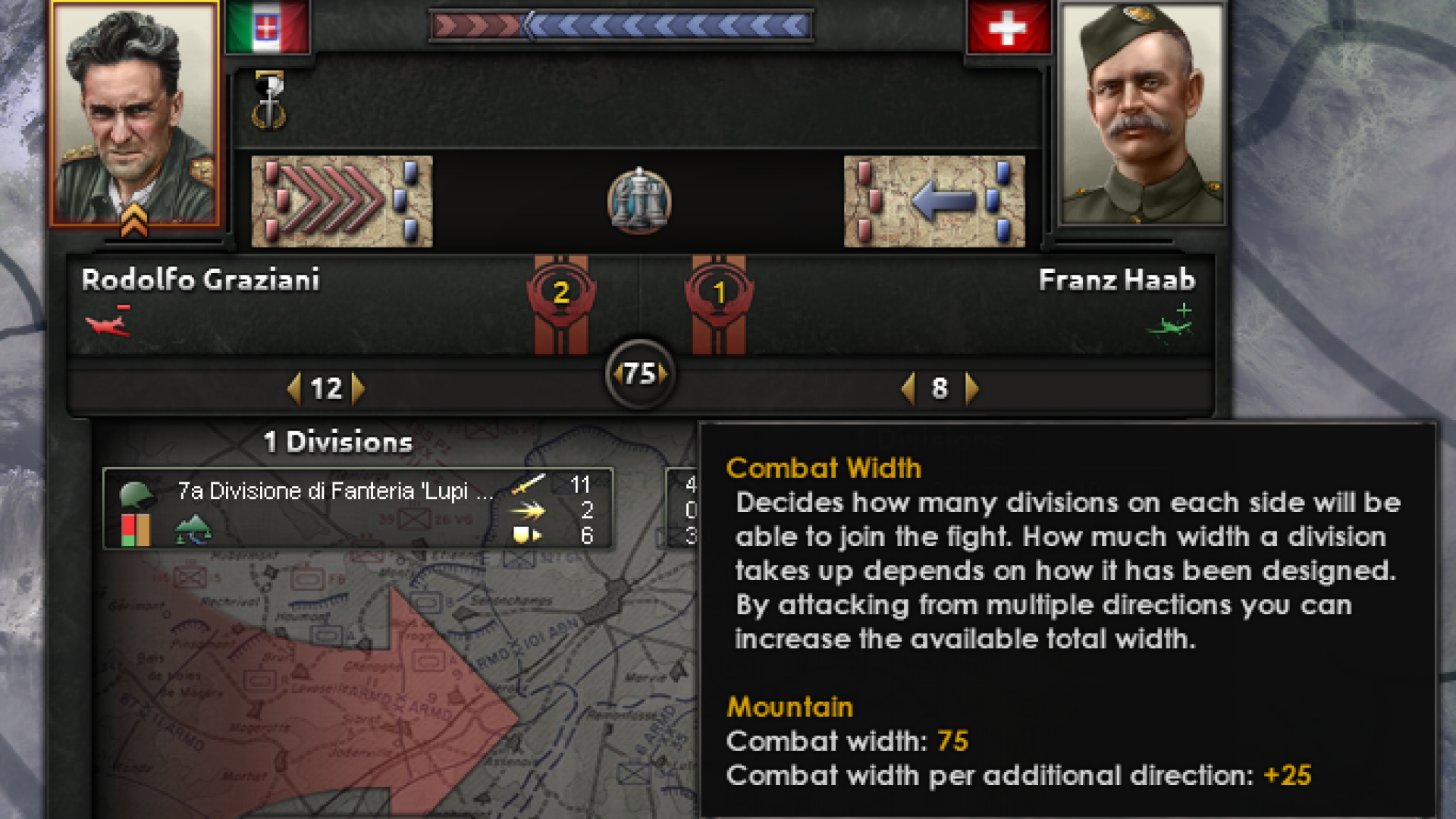 Hi everyone and welcome back to another dev diary! Today is about various changes that affect combat and units. With the Barbarossa update we want to shake up the meta a bit and also change a few stats and other aspects to make using the tank designer more interesting and rewarding.

High Command bonus changes
For a long time now unit bonuses from high command have confused people. Most expect that they apply to battalions, when in fact they apply only if their target unit type was “the majority type”, which was basically a weighted type count. They also could overlap, so infantry, mountaineers and artillery would apply to the same units letting you stack stuff in ways that was never intended and quite unintuitive.

This system has now changed, and divisions get bonuses based on their composition, this is a straight up ratio based on the number of non-support battalions of each type, so a 2x artillery 3x infantry division will be 40% artillery 60% infantry.
Battalions are always classified as a single type for this (even though some are scripted with multiple types) based on this priority:
cavalry > armor > artillery > motorized > mechanized > infantry

The exceptions being rocket & special forces, which both act as an addition, so if the 3 infantry divisions in the example above were mountain units, then the division would also be 60% special forces and if the 2 artillery are nebelwerfers it'd also be 40% rocket

When counting the battalions of armies (ie when we have an actual unit and not only a division template), battalions that lack equipment will count as less, so a Light Tank battalion with only half it's tanks will count as 0.5 battalions (and not count at all if without tanks). The total sum of the compositions will still end up 100% (unless every battalion is without equipment).

To make it easier to see this we now have an indicator in the division windows showing the breakdown.

Urban provinces are now the “widest” with a width of 96. But this does not mean they will be the easiest provinces to overwhelm. Mountains, marshes, and urban provinces now have reinforcement widths of ⅓ of province width instead of ½. This should hopefully give these provinces a slight defensive buff, while allowing us to open up pushing power in the more open tiles. 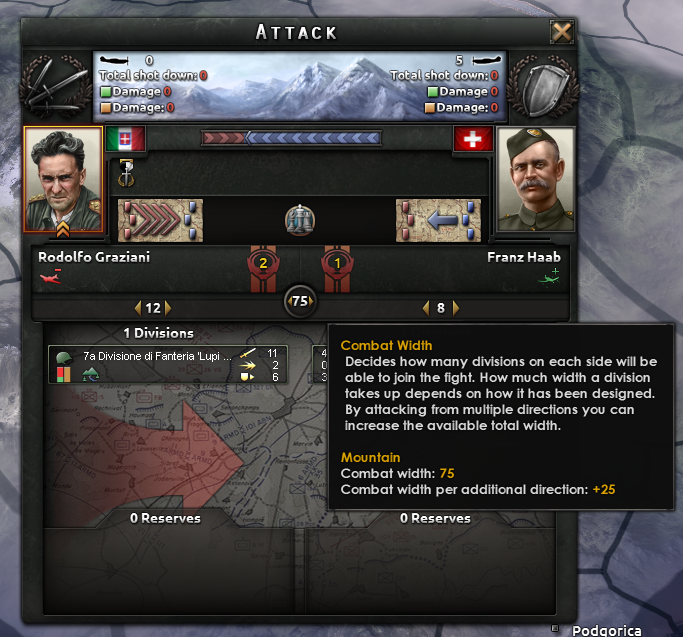 In conjunction with these changes, we have also been looking at reducing the overstacking penalty. We hope that this will alleviate some of the need to have divisions that are the perfect width for a given province. But at the same time, smaller countries should now be able to specialize their division width to suit their home terrain more appropriately.

Breakdown (numbers not final etc etc)
One of the major things that make larger divisions like 40 width armor hit disproportionally harder than smaller ones is also how targeting and damage works inside combat in relation to the enemies defense. Essentially the larger divisions make more efficient use of concentrated damage as it punches through defense. To solve this we are doing a few things. First of all we are weighting the targeting towards wider divisions being more likely targets and also when picking targets to try and match it to have wider divisions spread damage over smaller rather than always concentrating it. They will probably still hit harder, but combined with width changes and other downsides of larger divisions it should make it less clear cut.
However, this part isn’t quite done yet though so I’ll cover it again in more detail in one of the “bag of tricks” diaries in the future when i see how it pans out, but I figured it needed to be mentioned now That said though, to wet your appetites here is a little tease from a debug mapmode in development...

Armor and Piercing
Currently the effects of having stronger armor than the enemy can pierce, or being able to pierce an enemies armor are binary and give fixed bonuses. This meant that there wasn't really any benefit to have more armor than you needed to stop the enemies piercing, and also that being a single point of piercing under enemy armor was just as bad as having no piercing. So things were quite binary. With the tank designer coming we wanted to make it feel like your investments in upgrades were always worth it, so we are changing armor and piercing to have more gradual effects.

Reliability
For the tank designer it was important that reliability was more impactful if it was to be a good tradeoff with other aspects of design, so we needed to change it up (lest @CraniumMuppets 0% reliability tank monsters would take over the world). Now it will not just affect rate of loss in attrition but various other aspects: 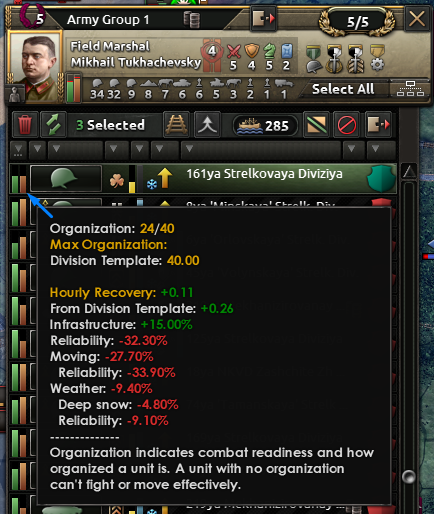 Our goal is that this creates interesting tradeoffs when designing equipment and will make you have to consider if its worth switching a strategy focused on speed and firepower towards reliability when operating in bad weather and tough areas like the Russian winter or in northern africa or jungles.

Oh, and I figured now might be a good time to point out that there will be a future diary on weather changes and other cool related stuff, so these changes aren't completely in isolation. But one step at a time

But before we go, a few words about the studio...

Studio Gold
Hello everyone, my name is Thomas, but perhaps better known as @Besuchov here

As you saw here we have recently reorganized ourselves a little, moving from a big centralized Stockholm studio to splitting ourselves into Red, Green and Gold. This is mainly an internal org shift to make sure we keep our growing organization firmly focused around making good games. You shouldn't notice too many differences in the short term, we are still PDS making GSG on the Clausewitz engine, but it does mean that we can align each studio to the particular games. Since you will hear the studio names every once in a while, I just wanted to say who I am and what the studio is responsible for.

My role is Studio Manager, which means I'm accountable for the long term success of Studio Gold and working with things like management, staffing, and long term plans. Studio Gold has as its main focus Hearts of Iron (but we may or may not have some secret other stuff as well). Directly making the games though, that's still the job of Podcat and the team, but I intend to do my best to create an environment where we have the best chances to make great games together.

For me this is coming full circle at Paradox. I started as a programmer in 2004 and one of my first tasks was to work on Hearts of Iron 2. Since then I've done various things including being lead programmer for Hearts of Iron 3 (and Victoria 2), Project Lead for EU4 and more recently Studio Manager for PDS. Next to EU, HOI is my favorite game and I'm delighted to be back in a place where I can focus on fewer games and where that game is Hearts of Iron. You will see more of me in the future even though I will mostly take a backseat to the team working on the game.

That’s all, see you all again next week for more dev diary goodness!
Reactions:

The only developer of Suggestions for Formable Nations Rework (SFNR): The Mod, a modification content in an attempt to rework the formable nations that has ALREADY existed in Waking the Tiger based on the very same named thread in the forum

No No no please, I barely understood the vanilla troop systems, spamming 14/4s no please
Reactions:

I like it thank you! Prepare for incoming salt though lol
Reactions:

Let's break the meta! I hardly understand it anyway!

I personally love the idea that we're busting open the old strats and assumptions about optimization. It demands innovation.

I hardly understood anything in this diary, since I much prefer playing the actually game and not crunching every number possible, so I suppose I am thrilled! I feel liberated I get to tackle a new system that encourages taking new risks and breaking away from the tried and true 10/20/40w
Last edited: May 5, 2021
Reactions:

This is actually quite nice if not complex.
Reactions:

We all know what is also Gold...
Reactions:

It seems that they added a wasteland in Australia. Nice.
Reactions:

How is the AI at handling these changes, and will we ever see a dev diary on that?
Toggle signature
I am therefore officially rooting for a Franco-German strike on Russia, prompting the Soviets to strike back with their hitherto secret nukes. This will serve as a salutary lesson to all involved and leave everyone suitably chastened.-El Pip

Devdiary about the supply changes when
Reactions:

Sounds exciting. Really hope this encourages more experimentation with division templates and equipment types. Previously there wasn't really any incentive to try anything unique since 20 width infantry and 40 width tanks did the job just fine but these changes (specifically armor and combat width changes) have the potential to shake the meta up a bit.
Reactions:

cotne22 said:
View attachment 714955
It seems that they added a wasteland in Australia. Nice.
Click to expand...

This looks more like a temperature map mode no?
Reactions:

Hi Podcat,
since you are Game Lead i would like to copy one last time a heavily upvoted post from past diarys with an easy to implement suggestion.

I have a suggestion for all focus trees.
Please mark the "historical" path in the focus tree somehow, so that as a player i can jump in as any nation and when i open the focus tree, i can see what focuses to take in what order for a historical game. I think the best way to do this would be to just highlight the focuses taken by the AI in historical mode and the order they are taken in.

Hello everybody and welcome to another dev diary for the upcoming Barbarossa patch and yet to be announced DLC. Today I’m going to be talking about the first focus tree which is a rework of Poland. Poland was first added as a free DLC on release...

Hello folks and welcome back to the Poland dev-diary extravaganza! This week, I am going to continue covering the changes coming to Poland in 1.11 Barbarossa and the unannounced DLC.Today we’ll be covering the DLC content. So, I’m going to start...