Jump to latest Follow Reply
Menu
Install the app
You are using an out of date browser. It may not display this or other websites correctly.
You should upgrade or use an alternative browser.
Hearts of Iron IV 37691 After Action Reports (AAR)
Previous dev diary Next dev diary
Show only dev responses

Hi guys! Today we are going to be talking about collaboration, compliance and also coups as we missed covering them in last weeks dev diary about operations.

Lets start off with coups. These are now an operation and needs to be set up by your agents. 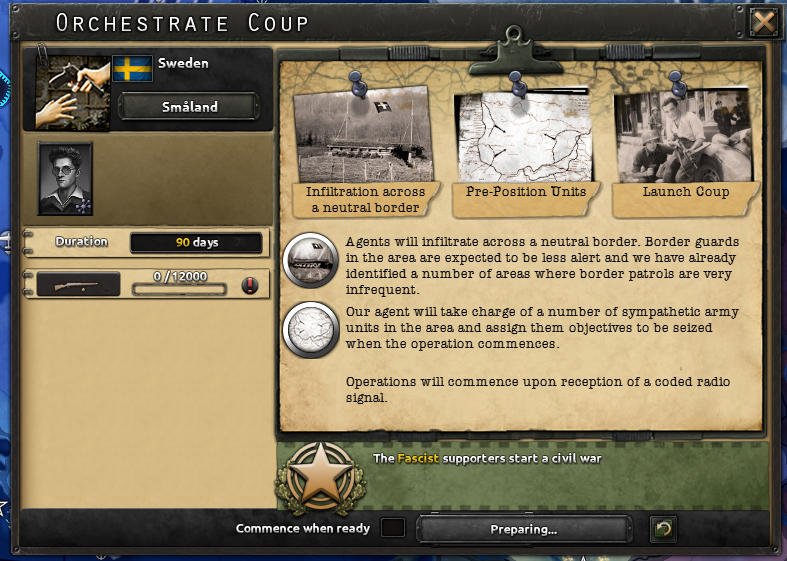 Its possible to say where you want the coup to originate, which adds some nice strategic power to it (such as targeting colonial areas that are harder to recover etc).

There are several ways to make a coup more successful, and in reverse protect yourself. A coup needs low stability, political support for the couping ideology and agents need to have prepared a network, infiltrated the government and built up the coup. So as an attacker you will want to mess with these things in advance (say by using spy missions and operations). And of course as the target, you want to keep these values up to stay safe, as well as making sure your nation counterespionage is up to the task.

We have also changed the behaviour of the resulting wars a bit so when a side wins against the other planes and ships will switch hands instead of being lost. This could often be a reason to launch small coups with no hope just to mess with the enemies navies.

Collaborators work similar, but opposite to Governments in Exile. They are created by an operation where agents are sent in to convert and/or support local collaborators.

This is an operation you can run more than once (although cost and time goes up every time), and for each one you will strengthen the collaborators. Foreign Collaboration governments are tracked (much like GiE) from your country screen.

The higher the value of collaborators present the easier it will be to make the nation capitulate which can be important in cases where you need to move in fast. You also unlocks levels of compliance in the new resistance and compliance system which will be transferred to regular compliance once the target nation is capitulated. This can be useful for giving you a head start on managing a lot of occupied areas by laying some groundwork before you even attack. 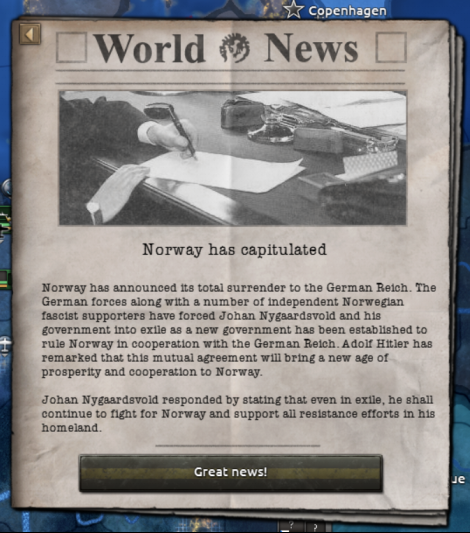 Speaking of compliance, we never really went into detail on how that worked before, so lets take a look now. If you need to read up on the changes coming to the resistance system as a whole though check out the dev diary here.

There are several levels of compliance "unlocks". These happen on a national level for the occupied nation.

The first unlock is “Informants.” Secret police working in the province have established a network of snitches and collaborators. This gives an increase to defense against enemy operatives in the occupied nation. The next unlock is “Local Police Force.” At this level, enough locals have been trained and are loyal enough to police their country for the occupiers. As a result, local garrison needs are now reduced. The third unlock is “Reorganized Workforce.” At this point, Life is returning to some level of normalcy and people are able to go about their daily lives and perform their normal jobs. This compliance unlock adds access to another 10% of factories and resources across the occupied nation. “Volunteer Program” is the fourth compliance unlock. This represents locals volunteering to serve in their occupier’s military and adds 10% of the population as fit for service.

The final unlock is “A New Regime”. At this highest level it is possible to create a new subject type “Collaboration Government” directly. This frees you up from policing it and ensures that it sticks to you in any peace deal you win. Getting high compliance can be a lot of effort in war time and it can be a very good idea to make sure you have collaborators in place before invasions. 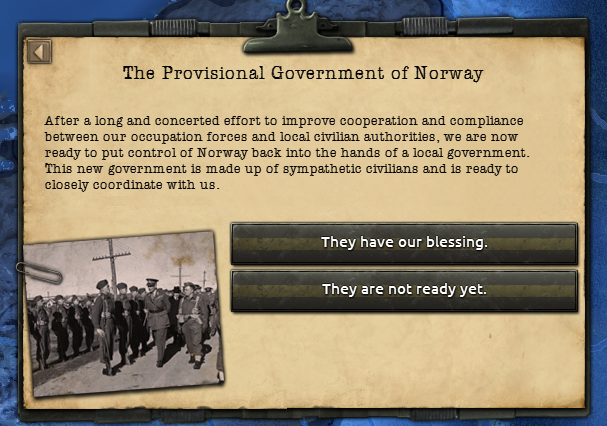 Collaboration governments will mirror your map color as well to show how closely aligned they are. 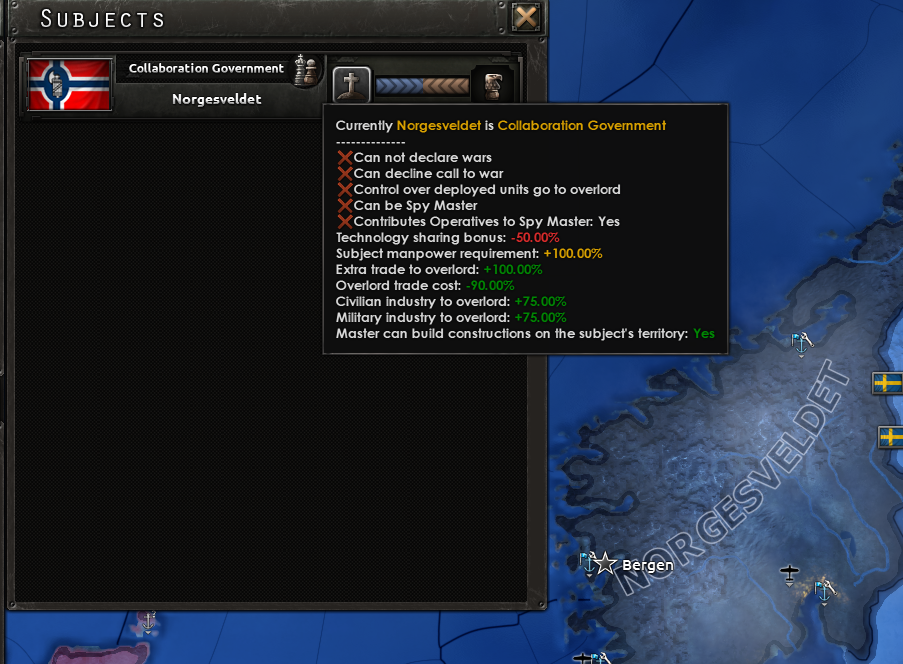 See you all next week when we will look at some intel gathering tools…
Last edited: Nov 27, 2019

Interesting. So can we convert Collaboration Governments to a different kind of subject? What happens to them after the war ends (assuming they're still in power, of course...)

Looking good, this probably will turn everyones current aproach on this game on their heads! I can't wait to try all this new stuff out
Toggle signature
Stellaris wars should look a litle at how EU4 handles it
Money&HOI4: -something something Weimar Republic something something-

If I’m correct, the only things you haven’t talked about yet, is intel, cryptography, and Portugal (as well as maybe achievements and tech boogaloos).

So setting up a collaboration government puts the nation in a civil war-like state?
Toggle signature
Hearts of Iron IV:
Also Check out my Suggestion to Fix the US Presidency in HOI4
Expanded News Events
Greek Political Parties Suggestions
Byzantine Emperor Suggestions

Looks good. Will there be a "Quisling" themed achivement?
Toggle signature
What to see who does bug testing for Stellaris? Just find a mirror...

Mr Thursday said:
Looks good. Will there be a "Quisling" themed achivement?
Click to expand...

PurpulaPhoenixum53 said:
So setting up a collaboration government puts the nation in a civil war-like state?
Click to expand...

not quite. its a lot weaker than that. the collaborators will affect surrender chance, and once you beat the legit government the compliance will be increased in the territory, but there is no civil war as such
Toggle signature
Reject reason to make the impossible possible!

BoomKidneyShot said:
Interesting. So can we convert Collaboration Governments to a different kind of subject? What happens to them after the war ends (assuming they're still in power, of course...)
Click to expand...

They stick around under your thumb if you win. They can move to other subject levels through normal means but are currently the most restricted one
Toggle signature
Reject reason to make the impossible possible!

question: why should I take the road to build up a Collaboration Government instead of just let a country "free" as a puppet? where are the advantages to the puppet-system?

So basically a collaboration government is, from a technical perspective, still the same country as before? What if a nation is in a civil war?

are reichskommissariats now the same as collaboration governments?

I assume that collaborator governments doesn't get cores on their land?

Edit: Sorry, I didn't look at the screenshot. So the master will have access to 75% of its subject's factories.
Toggle signature
"War does not determine who is right. Only who is left." - Bertrand Russell

When will you finally show us the Portuguese tree? Come on, why so much delay when the Spanish one was shown ages ago...
Toggle signature
ICQ: 473-826-068 (no longer in use) LINK TO STEAM PROFILE

"If a man does not strike first, he will be the first struck" - Athenogoras of Syracuse
"Force is the most effective and efficient means to do something and the virtuous prince will employ its leverage." - Machiavelli
"Men should either be treated generously or destroyed, because they take revenge for slight injures - for heavy ones they cannot" - Machiavelli
"It is best to be both feared and loved, however, if one cannot be both it is better to be feared than loved." - Machiavelli
"A prince must be a lion, but he must also know how to play the fox." - Machiavelli
"I'm the lord of lords, not the server of servants." - João II of Portugal

How much of that country manpower you will have access to with a collaborationist government in place?

Looks pretty awesome
Any chance of a release date ?
Toggle signature
We need Chalcedonian Christianity in 769 A.D. instead of Catholic/Orthodox split for Crusader Kings II. Copy and paste this into your signature if you agree!
My english is not perfect, please point out my mistakes.
Please go visit and support my suggestions threads !
Portraits suggest
Over suggests
GENERATION 40: The first time you see this, copy it into your sig on any forum and add 1 to the generation. Social experiment.

Is there a way to counter collaborators? Internal operations so to speak?

podcat said:
This is an operation you can run more than once (although cost and time goes up every time), and for each one you will strengthen the collaborators. Foreign Collaboration governments are tracked (much like GiE) from your country screen.
Click to expand...

podcat, are there any other operations that can be repeated? I'm mainly wondering about Infiltration operations. Can I keep doing them to get more and more (and updated) information about their armed forces?

Also, is there a way as an attacker to reduce compliance? Or is it only resistance growth what you can affect? For that matter, are compliance and resistance growth in a permanent tug-of-war? Or are they independent of each other?
Show hidden low quality content
You must log in or register to reply here.
Share:
Facebook Twitter Reddit Tumblr WhatsApp Share Link
Top Bottom