Jump to latest Follow Reply
Menu
Install the app
You are using an out of date browser. It may not display this or other websites correctly.
You should upgrade or use an alternative browser.
Hearts of Iron IV 40902 Bug Reports 11946 After Action Reports (AAR)
Previous dev diary Next dev diary
Show only dev responses

Hi everyone! The team is now back from the holidays and polishing on La Resistance. Today its time for a classic “bag of tricks” diary covering various small changes. The theme is quality of life here.


MEFO Bills
Ever forgotten to renew MEFO bills as Germany? Yeah me neither! But just in case someone does we got you covered. Now you can opt out or back in if you changed your mind, at any point during each cycle.

Construction queue
We have changed the default behaviour for the construction queue. Now when adding say a new factory construction it will be placed just below the last non-repair entry (rather than at the bottom). This removes a lot of extra work with having to reprioritize things and still allows you to put specific repair jobs at the top of the queue with no issues. There are also new shortcuts in those rare situations where you might prefer sending to end of queue directly. 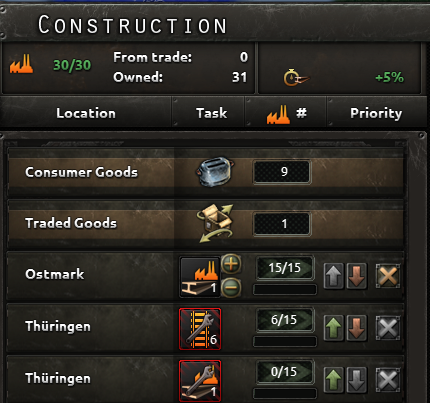 Exercise auto stop
Exercise now has 2 setting states so that you can either keep the old behaviour (keep training past max level and get XP) or hold shift when activating it and it will automatically stop when hitting the max level. This also works for ships and planes and its a nice relief not to have to babysit exercises when you aren’t after XP. 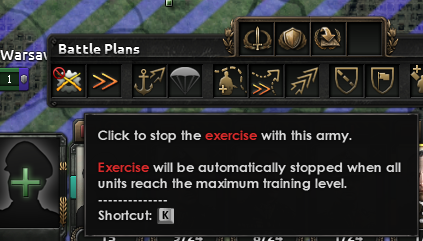 Decision Notifiers
Since we added decisions in Waking the Tiger the amount has been growing and we have been using them in more and more cool and creative ways. This has meant that the number of choices have gone up and some stuff has needed to change to make sure notifications are actually helpful for you. Firstly we have made notification numbers more visible and clear for both decisions and the espionage agency. Secondly its now possible to right click the decisions button to reset the available count. This means that after that only new ones will show up in the count. They can of course be switched on/off individually like before but if you are like me this saves a ton of clicking, and now it will impact what the notifiers show unlike before where it was only tied to separate alerts. 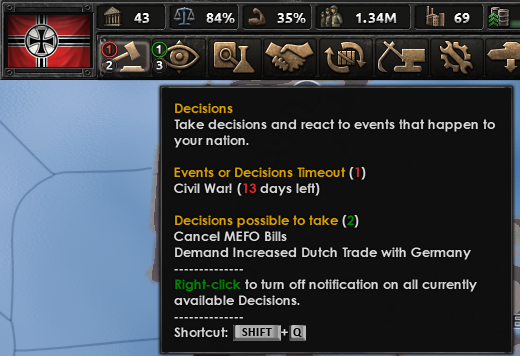 Allied Naval Invasion Alerts
Invasion alerts can be critically important for you to notice if an enemy is about to make a successful landing somewhere and you need to react. Previously it was difficult to help out nearby allies as alert were only for your own controlled shores. Now we have 2 new alerts mirroring the old ones for allies so you can bail out Mussolini when he's in a pinch

This is me as Evil France with Netherlands and Belgium in my faction getting alerted about an invasion on my allies.


Civil War Surprises
During a normal war you have time to set up your plans and get units into place fast, but in civil wars this is not so. With the spanish civil war in focus this expansion we wanted to make sure we made this less stressful for players, so now if any civil war happens the AI will wait a short while to activate its plans giving a human player time to organize or pause if they want. Its not a long break but its enough where it feels a lot more comfortable to play against now.


Zoomable & Searchable Focus Trees
We already went into this in detail back here. But since then we have improved the UI to make filtering better and set it up for old trees as well to make finding things easier. This below is for Mexico and lets you highlight stuff related to rebellions and church authority as special filters on top of the regular filters: 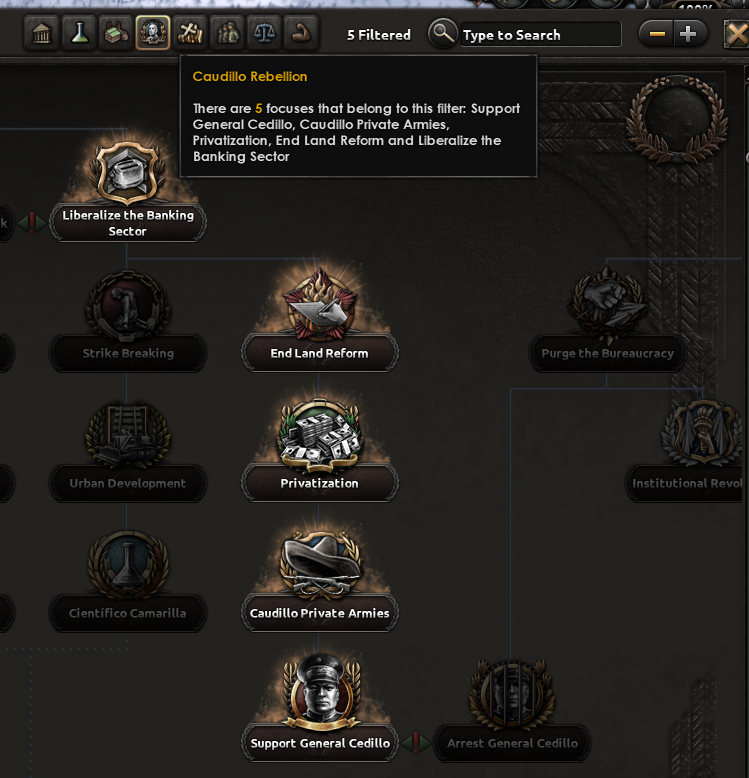 Thats its for this week! Today we are also starting up streaming again. Me and Daniel (mah leaks) are going to show off as much as we can of the Espionage system at 16:00CET. See you then!
Last edited: Jan 15, 2020

We’re in the endgame now boys.

I want only a single new button: deny to your ally the permission to saturate your Frontline.

Always great and welcome changes. For me, allied naval invasions are the best improvement of the day. Ironically, someone was just talking about the excise fuel issue - glad you did that because it will actually improve the AI, because except for SOV and USA, no one can exercise aircraft and navy for a long time, just for XP - usually just to get them to regular. Was hoping for more tricks though, although if this is 1/3, I'll be satisfied.
Toggle signature
HOI4 Tools

Hoping for a release date soon
Toggle signature
My EU4 Mods:
The Internal Balance - A Stability and Factions Overhaul
The Balance of Power 2.0 - Reworking How Rivals and Neighbors React to Expansion Long Term
Slovak and Turkish Cultures Tweak

Great to see these QOL changes.

Some quick suggestions on that theme, which presumably wouldn't be too hard to implement:

Suggestion: a notification when a trait unlocks for a general, or when a new slot is unlocked (otherwise you have to periodically go through all your generals).

The construction queue and exercise changes are great, quality of life improvements are always welcome.

The update to the construction queue is unexpected bet very nice. Also nice that automatic MEFO Bills renewel is finally in vanilla.

So, when can I buy it?!
Seriously take my money, I want that occupation overhaul and I don't have much patients left!

Would love a button to assist in the repairs of an ally, like as USA when we D Day i want to be able to help the AI France repair the ports so we actually can have supply

Yeah, its all coming together
Toggle signature
Simple and genius mod for EU4
https://steamcommunity.com/sharedfiles/filedetails/?id=1409824934

Will there also be an alert if a parachute dropping happened?
This might be handy for example britain or Germany as they have two or more fronts to focus on in a normal game

My equipment stockpiles rejoice with glee.

The German war industry sends it's regard!

Oh god, PLEASE don't tell me we hear that annoying "whoooop" sound everytime someone naval invades our allies now? That would be enough reason for me to never be in a faction ever.

Dsingis said:
Oh god, PLEASE don't tell me we hear that annoying "whoooop" sound everytime someone naval invades our allies now? That would be enough reason for me to never be in a faction ever.
Click to expand...

can we get an option to customise or delete the whoooooop

Thanks for listening to community suggestions! Much appreciated. Optional notifications for encirclements and forces being pierced would be nice. At least for me.

What can we expect about performance in 1.9? With all this Resistance, Compliance and Espionage stuff, will there be a downgrade?
Toggle signature
MY MODS​
[CK2] Original Portrait Frames: A minimod that restores the pre-Horse Lords portrait frames.
[CK2] Title Names Overhaul: A mod that overhauls the names of several titles, societies and more.
[CK2] Reduced Court Size: A minimod focused on removing useless courtiers to improve performance.
[HOI4] Sensible Country Names: A mod aiming to give all countries and factions more sensible names, while fixing dozens of vanilla typos.
[HOI4] Sensible Portraits: A mod adding many more generic portraits and revamping several leader portraits.
[HOI4] Sensible Flags: A mod revamping more than 800 historically accurate flags.

Restiance rework should help the performance quite massivly. So every losses because of the new Espionage system should be easily be balanced by the gains of the reworked resistance system.

I have a QOL idea, "i want to finish divisions training like streak, which i can preset how much training they get"
let say i wish to man Westwall asap with half(50%) trained divisions
now i have to get back to them from time to time, but if i can set the "finish line" at 50%
they will be release to the world with half training, and i can just put them to stand there and focus on attacking the eastern europe
K

Is there any possibility that we have to investigate any new technology for this dlc, such as the infantry tanks?