Jump to latest Follow Reply
Menu
Install the app
You are using an out of date browser. It may not display this or other websites correctly.
You should upgrade or use an alternative browser.
Hearts of Iron IV 42215 Bug Reports 13101 After Action Reports (AAR)
Previous dev diary Next dev diary
Show only dev responses 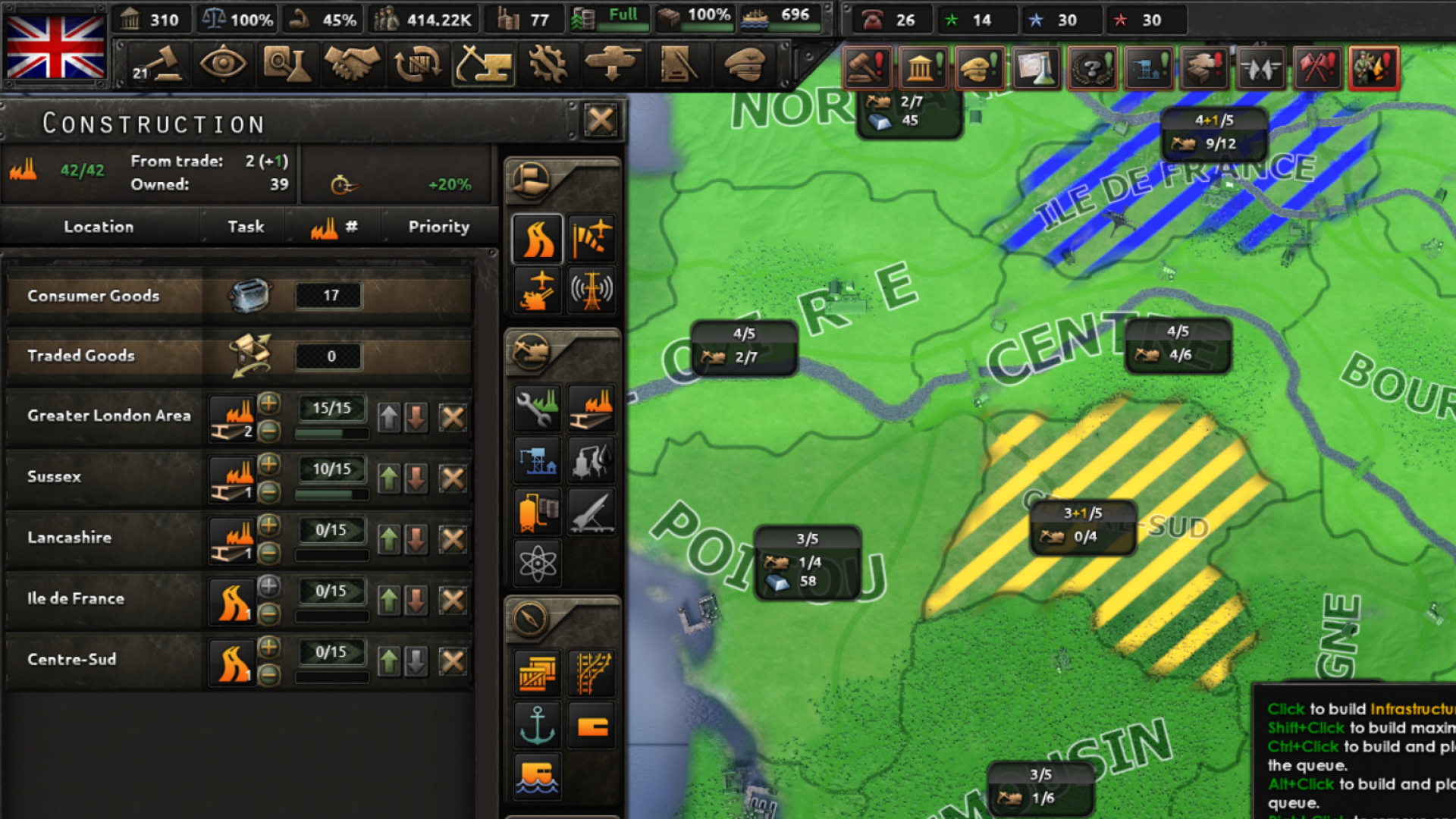 Greetings all, and welcome back for a slightly less content-focused dev diary than our latter soviet efforts. Today we’ll be covering a couple of smaller additions to be added in NSB, some of which have been hinted at before, followed by a small announcement from project management.

One of our long-standing goals with the new supply system, was to introduce some changes to the way weather affects the gameplay experience. To give some strategic relevance to weather, we’ve slowed down the system to modulate between potential weather effects on a less frequent basis. This gives a player some time to react to potentially advantageous/disadvantageous conditions, as well as being somewhat more predictable on a larger scale.

In addition to this, we’ve taken a broad look at the combination of stat effects on ground conditions, temperatures, and weather, in order to mesh more closely with the new supply system, and to give a greater impact on campaigns - especially those conducted in adverse conditions:


Visually the weather effects have been updated to be easier to spot on the map, with updated particle effects weather will look better than ever. This also makes it clearer when a region is experiencing a weather event so you can react to it faster.

In NSB, we’re upgrading the ability to manage specific equipment usage by division template. This means you can ensure that your elite breakthrough divisions have everything they need, while line divisions have equipment of a lower priority. 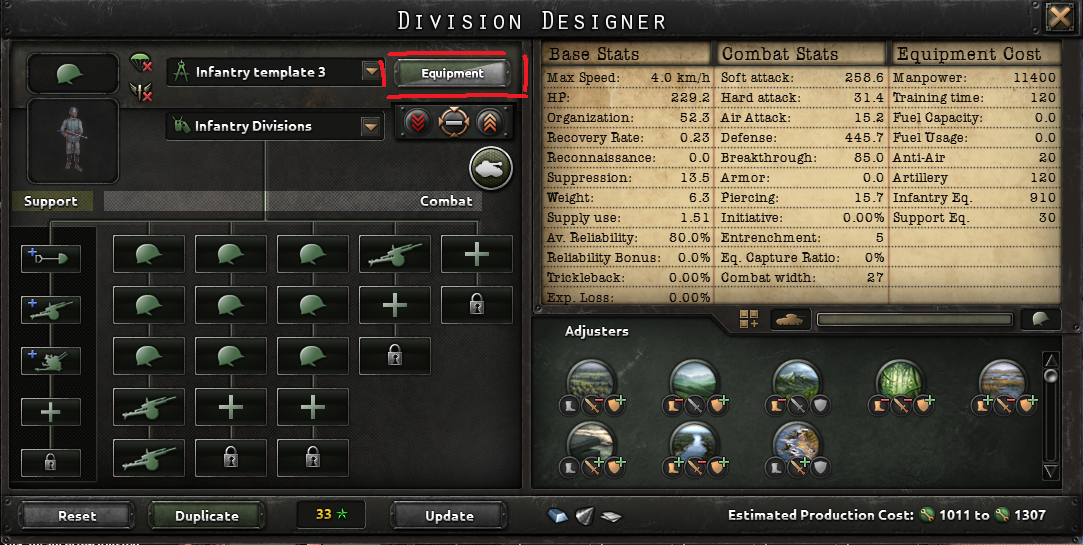 You can access this feature in the division designer, where you’ll have a comprehensive breakdown of all equipment types currently stockpiled. You'll now be able to allow/deny by category, both in archetype and variant, without the need to manage everything individually. 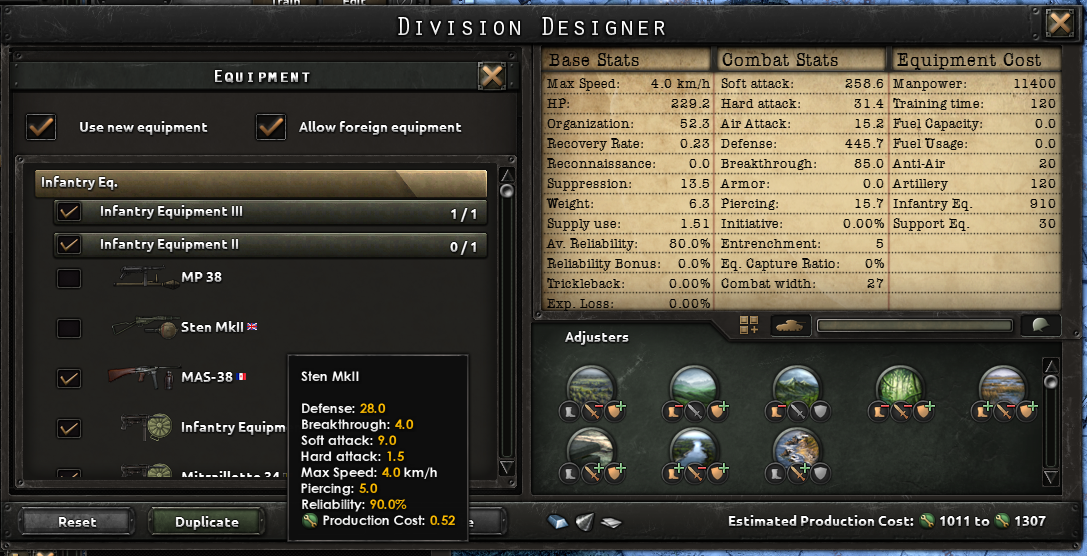 We’ve provided several broad methods of manipulating equipment usage, in the form of a togglable setting on whether this division template should automatically have newly researched equipment enabled, and a quick method of toggling the usage of foreign equipment. 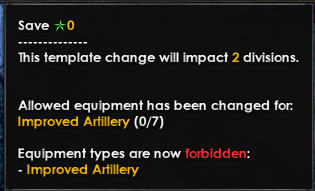 Changing these settings will not incur any explicit cost, though you’ll need to maintain awareness of your production lines when using these settings prodigiously. The update division tooltip, as before, will give you a summary of the scope of your changes, as well as how many divisions are likely to be impacted by this change. Lastly, it is important to note that these settings will affect reinforcement and training only - your existing divisions will not have their weapons immediately confiscated.

Indeed, as hinted at yesterday, we’re introducing allied construction to the game. This oft-requested feature will allow you to build certain buildings in the territory of members of your faction. 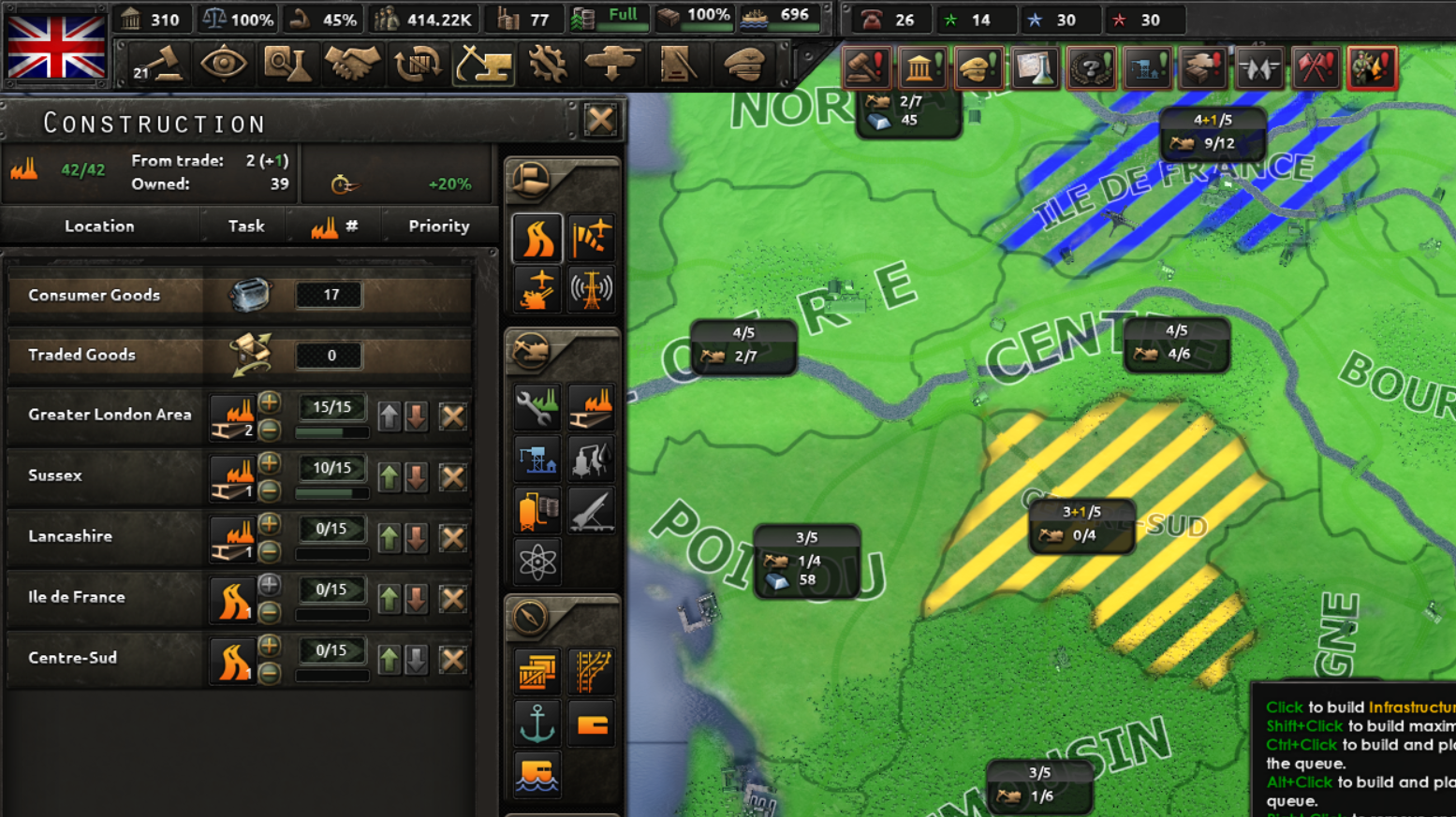 Unlike subject construction, this will utilize only your own factories, leaving your favored ally to continue with their own constructions as before. We have limited the building types permitted for allied construction to Infrastructure, Railways, Airbases, and Radar, however this setting is easily moddable for those interested in expanding their options. We initially allowed the allied construction of forts, but, well, the office MP proved why that was a terrible idea.

For balance reasons, constructions with levels dependent on technology (ie Radar) will be limited by the tech of the recipient country, not the builder.

We've taken the opportunity with NSB to add some feedback to one of the more serious situations an army can find itself in - encirclement. Whenever an encircled division is destroyed, a short animation will be played to draw some attention towards it. Of course, this animation also plays if you are the one doing the destroying.

Changing of the Guard

Here, I’ll hand over to @podcat to cover an upcoming change in the HoI development team.

Hi everyone Dan here, I want to let you know that you’ll be seeing Peter more and more as he is now taking over as game director on Hearts of Iron IV.

Looking back I have been working on HOI4 for about 7 years now and before this I worked a few years on HOI3. So it's fair to say that Hearts of Iron will always be close to my heart, but I also feel like it's time for something new to sink my teeth into.

I’m going to be working with a Secret Project which I can't tell you very much about - except that I am super pumped about it, and that it isn't HOI5. While I’m sure the time will come for that, right now we feel that HOI4 still has room to be developed with content and cool stuff.

Timing wise it fits well for me. No Step Back was the last expansion step I had penned down back when the original game released in 2016 so it's time for another 5 year plan (heh). It takes the game full circle as with NSB we will have touched on all the major systems in free updates and expansions at least once. It's also a perfect time to get more fresh perspectives to help evolve the game when most of my original ideas and plans have now been done.

Of course you will still see me around and I expect I’ll be poking around here and there in HOI (one does not simply let go of their baby so easily!), but I am confident in Peter and the team to take the helm and keep steering the ship now, and I am sure No Step Back will be awesome and that you will all love it. 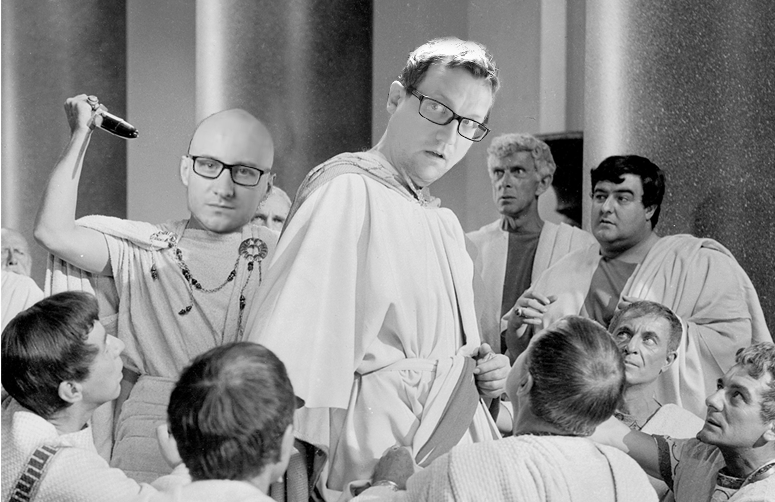 Peter here again - I’m honored to have been asked to take the reigns on HoI. I’ve been working closely with Dan and the team over the last months, and feel confident that we can keep on building HoI in the right direction.

As some of you will be aware, I’ve come to HoI by way of Imperator, having previously worked on several PDS projects as a content designer. Prior to that, I had a long and entirely unrelated career in classical music. Historical PDS titles are something I’ve been an avid fan of from long before I worked here, and I’m super excited to take my experiences forward from Macedonian nation-building to the 20th century.

We have many plans for the future of HoI so after NSB is safely out of the door, you’ll get a chance to see my take on the future of the game. This said, I’ll point out that Dan and I are very much aligned on the creative direction of HoI 4, so to pre-empt some questions, a switch in game director does not mean lootboxes, mana, or any radical shift in core design philosophy.

What does it mean? Well, it’ll take time to see that properly. We’ve made no secret of the intentions around future dlcs and content (see last PDXcon for more details!), so the best answer I can give you there is that we’ll be doing our utmost to meet this potential roadmap while I begin to put my personal spin on the game. I’m more than happy to try and answer broad questions about my thoughts on the future of this excellent game, my industry experiences thus far, or myriad other topics, but please be aware that (beyond what I’ve already implied) we will not, as usual, be able to answer qualitative questions on future releases.

In general, you’ll find me present and willing to engage in polite discussion on the forums and other media inasmuch as my time allows, so I expect to begin interacting more with this passionate community in the near future!

I like all the new changes!
Toggle signature
My first AAR: ITALY'S TEN YEARS WAR - halted due a sudden crash into a savegame :sad:

Small but simple. These changes are nice to have.
Toggle signature
All changes.
Reactions:

How do you code the AI to handle the unique terrains?
Toggle signature
I am therefore officially rooting for a Franco-German strike on Russia, prompting the Soviets to strike back with their hitherto secret nukes. This will serve as a salutary lesson to all involved and leave everyone suitably chastened.-El Pip

I sincerely hope that allied construction will be in the base game.
Reactions:

Hey guys are we going to get a allied repair feature aswell? this is specifically annoying when doing D-Day as an example when alot of the french ports, airfields and infrastructure are damaged
Reactions:

Arheo said:
This oft-requested feature will allow you to build certain buildings in the territory of members of your faction.
Click to expand...

Voivode of the Serbs

Thanks for the amazing work on the game so far Podcat, and good luck to Arheo! You were one of my favourite devs on Imperator so I'm sure you'll do great!
Toggle signature
Mod team member of Beyond Typus and the yet unreleased Beyond Insanity, as well as an occasional helper and consultant of Imperialism: Reinvigorated, Voltaire's Nightmare, Project Parabellum and Africa Universalis.

The Balkans guy most of the time, but also a self-proclaimed Italy expert due to countless hours of research put into both peninsulas.

Might I enquire as to how many office MP games it took for the Allies to build level 10 forts in every tile of France?

In all seriousness I would like to know what exactly made you prevent forts being built (a change I fully support). Was it allied cheese?
Reactions:

I can not help it but wonder how this change in leadership will affect the game on the long run.
Anyways, best of luck!!!

Arheo said:
I’m going to be working with a Secret Project which I can't tell you very much about - except that I am super pumped about it, and that it isn't HOI5.
Click to expand...

You got a typo there, do you mean EU5
Reactions:

Anybody else reading after listening to the new sabaton song premier?
Reactions:

Congratulations and thanks to both @Arheo and @podcat you are both dear friends and I'm excited to see what comes in the future under both new directions!
Reactions:

Simple, but good! The only thing I'm worried about is the ground changes, as the Soviets tend to have a difficult time currently retaking some of the Polesie marshlands, and that can hamper how far West they eventually get in a historical game.
Toggle signature
Hearts of Iron IV:
Also Check out my Suggestion to Fix the US Presidency in HOI4
Expanded News Events
Greek Political Parties Suggestions
Byzantine Emperor Suggestions