Jump to latest Follow Reply
Menu
Install the app
You are using an out of date browser. It may not display this or other websites correctly.
You should upgrade or use an alternative browser.
Hearts of Iron IV 38422 Bug Reports 10426 After Action Reports (AAR)
Previous dev diary Next dev diary
Show only dev responses

Hi and welcome to another diary! I am home sick today, so this gives me something to do (besides suffering)! Today it’s time for another Bag of Tricks diary where we cover a couple of features that aren’t necessarily connected. Two of these do fit quite well with the expansions sub-theme of fleshing out democracies. Lets dig right in!

Expeditionary Force Requests
The Allies are made up of many nations and coordinating them can be difficult. To help with this Man the Guns adds the ability to request expeditionary forces from multiple nations directly when organizing your forces. 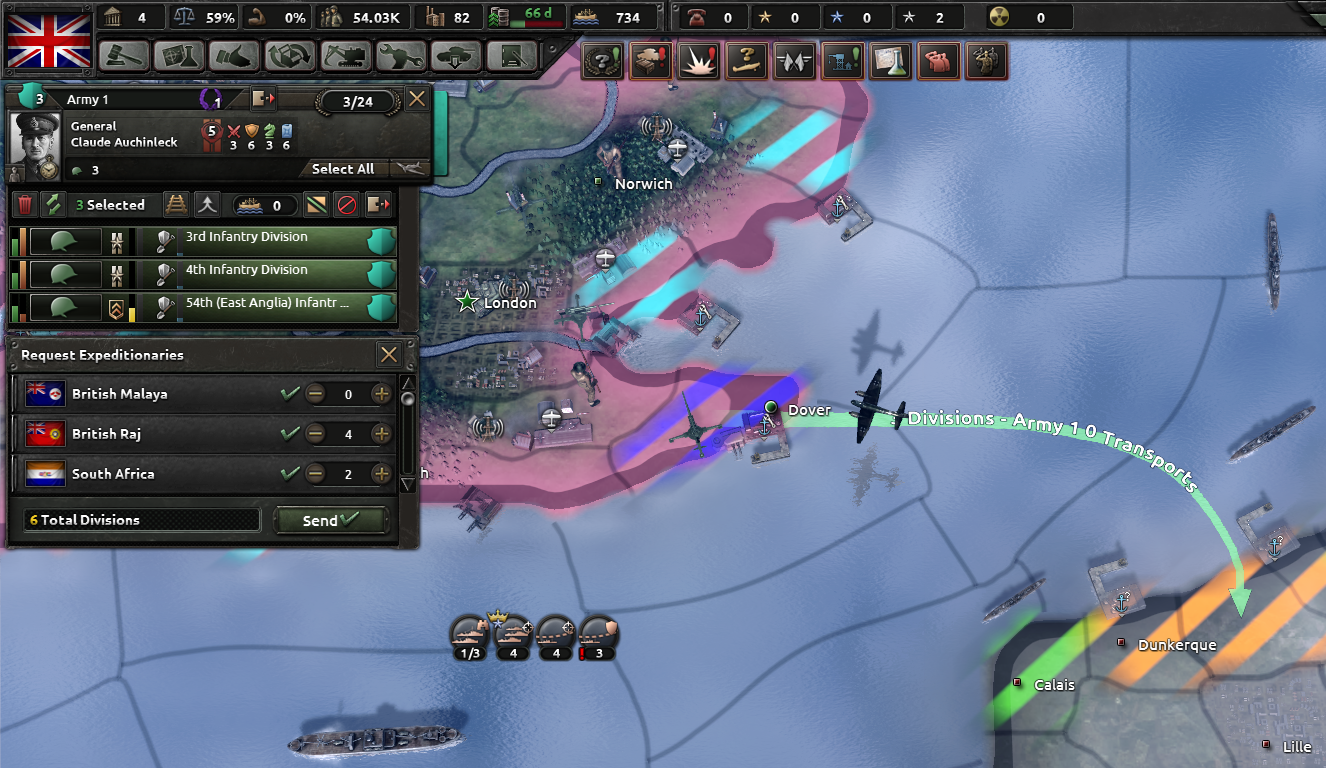 The AI will respond immediately and assign the troops to your plan if it approves. That means you can control how they get there, should you wish it. 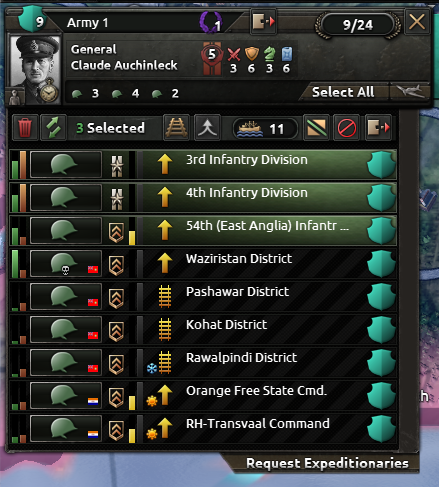 It is also possible to request expeditionaries straight from an empty army. To do that click the new expeditionary army button at the bottom of the new army button:

Useful if you have no units in an area, but an ally i your faction does. Then you could draw a plan there and tell them what to do. AI will prefer picking troops close to the plan if they can.

The AI is pretty helpful, but will not give you more than it can spare and still ensure its home areas are safe. It will also be a bit watchful, so if you always send them ahead to die you might find that it doesn’t want to hand over as much troops anymore. Depending on what plan you draw up it will also try to send suitable units. So marines for invasions for example. This means that for the AI to know if and what it should send you must first draw up the plan before sending your request.

Note that I am talking about AI here. This action isn't available towards players. It's just a lot simpler to talk to each other and use existing expeditionary sending for that.

To be able to request expeditionaries, you must either be the faction leader (which with MTG can now change from whoever created the faction), or have subject nations as the action is also available for those. The action is available for all ideologies, but we think it fits the democratic theme the most considering the plethora of smaller nations banded together against the axis.


Supervised State
Supervised States are a new autonomy level in MTG. Designed to let democracies do puppeting in a way that suits them better, and ensures the targeted nations can't just turn around and go against them. 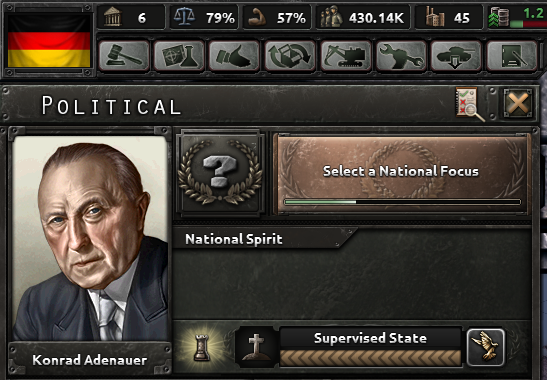 West Germany is here a supervised state set up by the British. A supervised state is not particularly oppressive, but does come with restrictions.
A Supervised state is essentially on a timer, as they will also slowly regain autonomy, so you can not really keep them a subject forever. They also do not have any other steps and go directly to Free once they are autonomous enough. At this point restrictions drop and they are free to leave factions etc.


On-map decisions
This one is something I’ve been wanting as soon as I noticed that people wanted to be able to do state based or decisions with location. Often the interesting part of a decision is where, and huge lists of states isn't all that nice to scroll through. We actually had to restrict some stuff for Waking the Tiger because the list of states would have become unmanageable otherwise. To deal with that the 1.6 Ironclad update will also make decisions available on map as long as you have the decisions view open. Some are simply mirrored, so you can pick them in either the list or on the map, and some are only on the map. A good example of the second type is the Blackshirt Marches when turning UK towards fascism. A lot of different states with different costs make for overwhelming choice, but on the map it is quite easy to see both where and how costly they are. 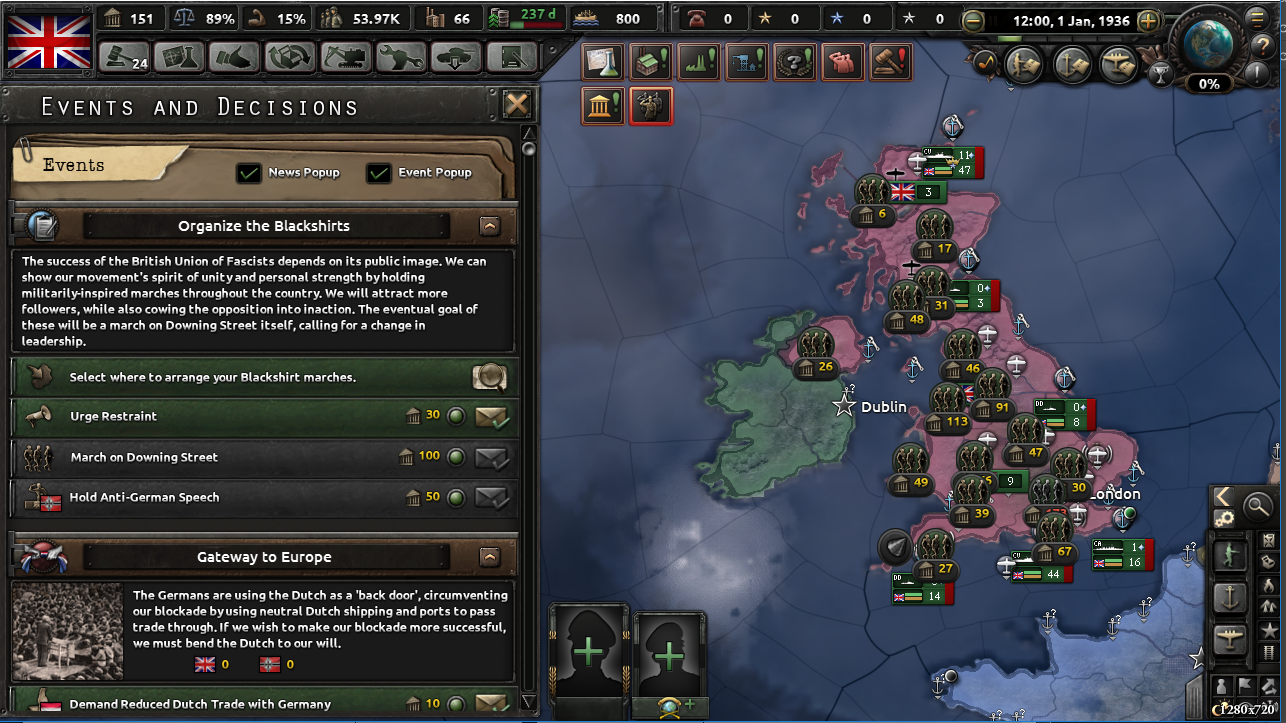 Here is one of the prospecting decisions, already activated, if you control Nigeria: 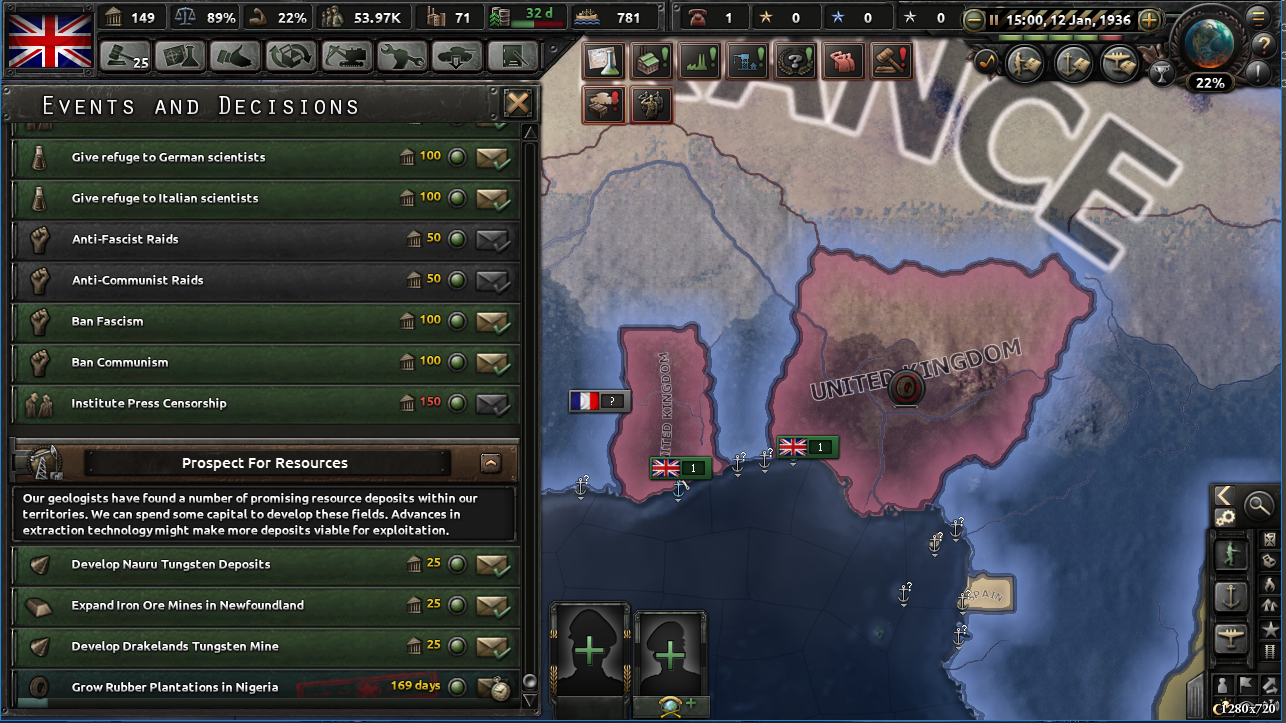 And @Bratyn 's favorite, activating the flooding defenses of Netherlands, directly on the map! 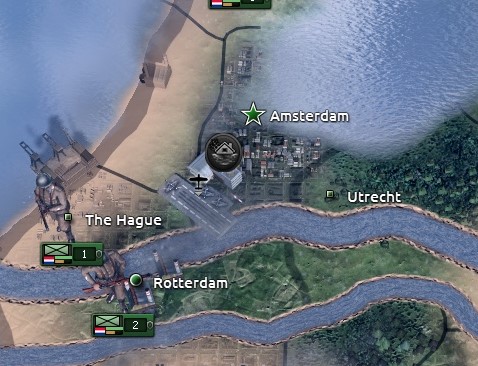 See you all next week and don’t miss out on the stream at 16:00 CET for more United Kingdom gameplay.


Rejected Titles:
- "Commonwealth, assemble!"
- HOI4, now with less giant decision lists of places you secretly don't know where they are but are too embarrassed to ask
- CLICK ALL THE THINGS
- What do you mean “A slightly less oppressed chess piece” isn’t clear art direction?
- FEATURE: Britain can now accurately represent the brilliant idea that was the Dieppe Raid
- Deliberately flooding your country is now 200% easier
- Click ~here~ to become fascist
- We are running out of chess pieces for autonomy level
- Winston Churchill has a BRILLIANT IDEA and only needs a few Colonials to do it..
- Clickbait
Last edited: Oct 31, 2018

Can't wait to flood Holland without any strategic need!
B

Open World Gamer said:
I seems my expectations were right.
Click to expand...

Unfortunately only the first part - you wrote: 'Another Bags of tricks diary? Not bad, but they really should start showing us the naval overhaul.' My hpoe was part 2!

"To help with this Man the Guns adds the ability to request expeditionary forces from multiple nations directly when organizing your forces."

Woop woop. Now we can finally have some coordinated efforts by the allies!
Toggle signature
Eager for NSB and the Soviet Rework? Check out the Permament Revolution Lives On! - a Trotskyist AAR.

Podcat, will there be any possibility of getting air units from your AI allies? It is a huge problem now that they muck up airbases with their air units, which then prevent one's own units from basing there. A solution would be to "requisition" the AI units and then park them in Mongolia or somewhere.
Toggle signature
Sad Refugee from Paradox Games Past

@podcat it would be nice a system to lead volunteer forces. AI sometimes is really stupid and camps a harbour for months

Siralus said:
Will on-map decisions be applied to the WTT content? E.g. Political competition in China?
Click to expand...

yup, they are much easier to keep track of now when on map


Mr. Strogoff said:
Can you annex a supervised state? They look to be easy to annex unless the autonomy gain is ridiculously fast.
Click to expand...

Kriegsspieler said:
Podcat, will there be any possibility of getting air units from your AI allies? It is a huge problem now that they muck up airbases with their air units, which then prevent one's own units from basing there. A solution would be to "requisition" the AI units and then park them in Mongolia or somewhere.
Click to expand...

not atm, but its a problem we know about
Toggle signature
Reject reason to make the impossible possible!

Two other things, I just wanna make sure. Are supervised states exclusive to democracies? And is this "can't change ideology" thing hardcoded or can it be added to custom subject levels?

Keralia said:
Two other things, I just wanna make sure. Are supervised states exclusive to democracies? And is this "can't change ideology" thing hardcoded or can it be added to custom subject levels?
Click to expand...

its democracies only. as for the other stuff, there will be some more info related to it in the future
Toggle signature
Reject reason to make the impossible possible!

Should have called supervised state Sphere of Influence.


podcat said:
- Winston Churchill has a BRILLIANT IDEA and only needs a few Colonials to do it..
Click to expand...

That one made me laugh. That said the landing on Gallipoli was not Chucrhills idea, his idea was a blitz with ships, after that failed he resigned and someone else decided "hey maybe we should land troops". Churchills plan was a failure but he's not responsible for the famous failure.
Toggle signature
Baal: You can't be serious.
O'Neill: Yes I can... I just chose not to.

Expeditionary Force Requests will certainly make playing with the UK (or even the US) much more interesting! Thank you!

James Hale said:
Are we ever actually going to see this mythical ship designer?
Click to expand...

On Map Decisions and missions sound like a great way to have a meaningful Pearl Harbor Attack, anyway that can be added?

I am most interested in that green bar and 66 day at the very top of the first screenshot.

I assume that is estimate of how long your fuel stockpile will last.
Toggle signature
Up/Down Vote Is on the way out. Please suggest removing the feature. The reason? Too much laziness and discourage new idea from being posted.

There will be more changes in frontline mechanic in mtg? Once a line is penetrated actual system is very bad containing a flood of units, and I'm not talking of a tank encirculment
Toggle signature
I was a TGC modder. Cartographer, celeste.

podcat said:
we are looking into various issues with drift you cant stop. will talk about it when done
Click to expand...

Really glad to read this. I hope that duplicating focus trees with alternate paths for civil wars is part of this discussion.
Last edited: Oct 31, 2018

Hum... the expeditionary request seems both nice and useless... Today if I want to use the other country troops, I request everything and arrange things the way I want.
Here I request "random" unit to the country...

In the example provide, you requested units for a landing and got unit at 20% strength which is useless for such task.

Leinad965 said:
There is a long term bug (reported in bugforum), when I can ask my allies in TfV for lend lease, which usually my allies confirm and immediately stop sending stuff. Would it be fixed please in MtG?
Click to expand...

Good point about lend lease from the A.I.