Jump to latest Follow Reply
Menu
Install the app
You are using an out of date browser. It may not display this or other websites correctly.
You should upgrade or use an alternative browser.
Hearts of Iron IV 40904 Bug Reports 11946 After Action Reports (AAR)
Previous dev diary Next dev diary
Show only dev responses

Welcome to another bag of tricks dev diary for 1.5 “Cornflakes” and the unannounced expansion. Today we have several smaller features and improvements for you and all are connected to equipment in one way or the other.

Building your own stuff
Managing production lines is something you do all the time, and thus we want the interface to help you as much as possible. We have done several things to help out with this, like allowing you to collapse entries: 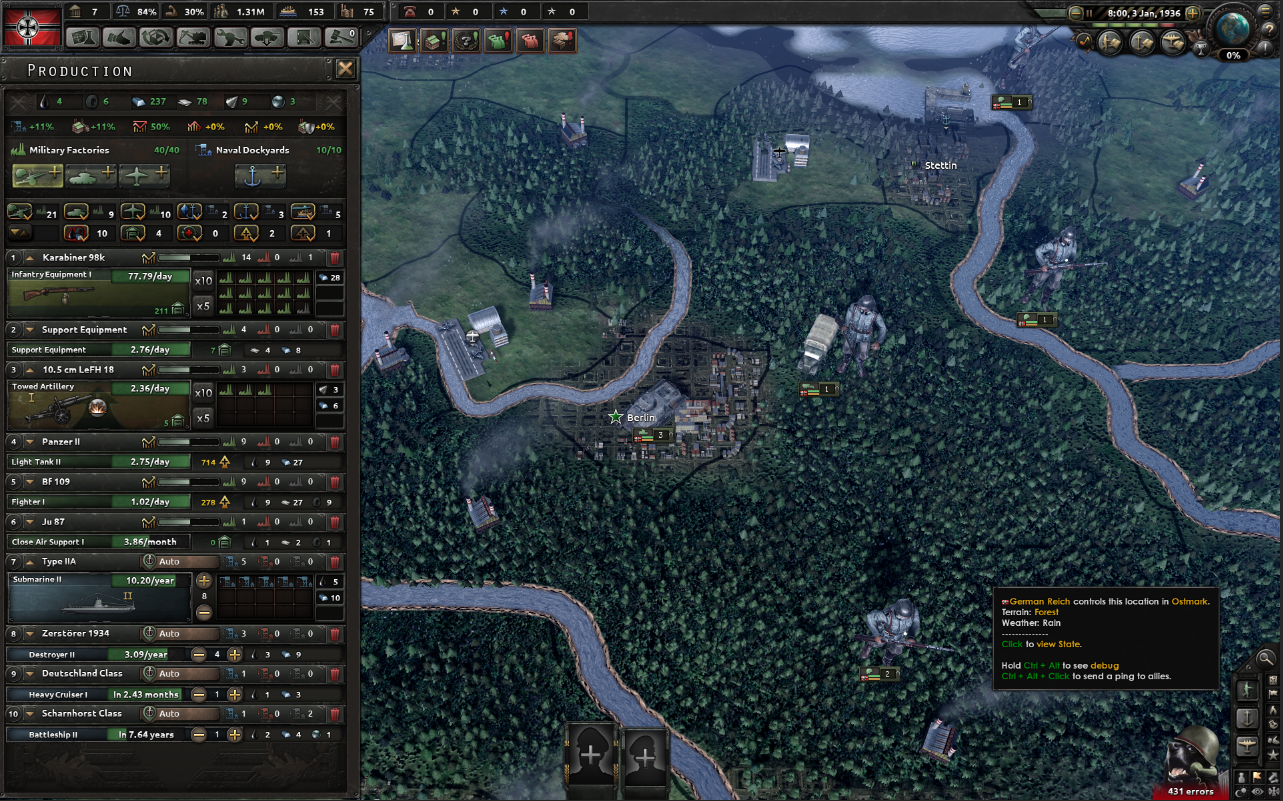 The UI now also has more filters, so its easy to just look at lines lacking resources, lines used for upgrade, lines going straight to stockpile etc. Its also possible to assign up to 150 factories to a line (not naval production lines) by using the x5 and x10 toggles.

Toggling on x5 lets you put down 5 factories with each click so its easier to manage big lines (this part is still a bit more work in progress than normal and may see changes before release though).

We have also added drag-and-drop to the production interface and the civilian construction interface too. It makes reordering and changing priorities a breeze. See the future! In moving pictures:

Hopefully this will make it a lot easier to manage things for everyone and if it proves popular we may start adding this to other interfaces too.


Taking other people's stuff
At the end of combats it will now be possible to capture enemy equipment. The divisions involved will grab stuff depending on participation (higher level maintenance companies help a lot here if you want to take full advantage of capturing). If the equipment isn't something the division needs it goes back to your stockpile. This one will be available for people with the DLC.

Getting rid of stuff you don't want
There are sometimes situations when you just want to get rid of some of your equipment stockpiles. Death or Dishonor added the ability to convert equipment, but that is not always applicable. For people who get the DLC we have now added the option of straight up cleaning out your stores of stuff you don’t need or want anymore. To avoid exploits around surrender where someone in MP would try to destroy things to keep them out of enemy hands these are held in a special “being destroyed” storage, and will be accessible to the conqueror if you fall within 90 days. 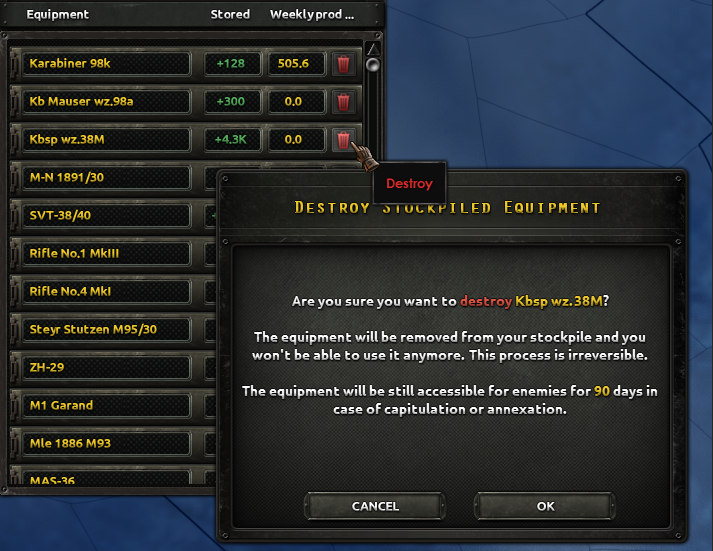 Also finally there is another way available to all. Lend Lease has been changed to allow to send equipment that isn’t originally yours. This means that you can give captured stuff to your allies etc. 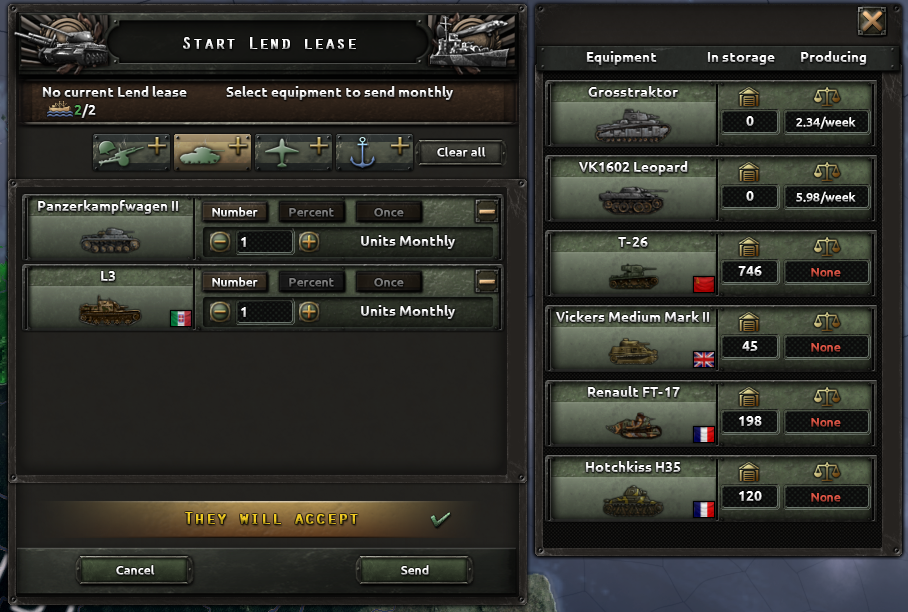 Sending equipment that isn't yours like this will however not give you any XP (you wasn't the one who did research and development after all).

See you all next week for more updates and details!

Also, do you need more friends to invade and annex? Tell them to take a look at our new stream starting later today, Blitzkrieg for dummies! As always on Twitch: https://go.twitch.tv/paradoxinteractive .

oooh I like the drag and drop interface. Such a convenience!
Toggle signature
Hearts of Iron 4: Minimalist Mod

Arg, you are so cruel. People expected to see another focus tree overhaul. Instead you give us news about interface changes. >_<
Toggle signature
"I stepped out. I did not step down." - Volrath, The Fallen
Reactions:

Good stuff, some of these I've been waiting for since launch.
Toggle signature
I'm no cheat. I give folk what they want, nothing more. That they oft desire unworthy things- that is entirely the fault of their rotten natures.

Nifty changes for sure, in particular the production interface. Drag and Drop baby!

Finally, we can throw away equipments from all over the world! *tears with joy*
Toggle signature
It is too easy to love a nestful of cats but too hard to raise all of them.

Here is my take on the new features:

6 Min. video of me talking about the new features. If you don't want to watch, in short I like them.

For a few hours Youtube would not process the uploaded video & I feel asleep so it is delayed.
Last edited: Oct 26, 2017
Toggle signature
My Mods: Third Reich Events for HOI IV ,Third Reich Events [Sub-Mod for BlackICE]

Do encircled divisions yield more loot?
Toggle signature
Hoi4 Tech Lead on fixing AI scrapping Naval Construction:
"releasing a hotfix for one bug is really not cost-effective so we mostly reserve it for critical issues"

ChairmanMeow said:
Finally, we can throw away equipments from all over the world! *tears with joy*
Click to expand...

Could be even better, if we could sell it to random nations, which are ready to pay.

podcat said:
Toggling on x5 lets you put down 5 factories with each click so its easier to manage big lines (this part is still a bit more work in progress than normal and may see changes before release though).
Click to expand...

I'd love it more if scrapping stuff would result in gaining resources, though...

I've been waiting all day for this.

But please don't forget the "do not upgrade/modernize" button for air and land units !!!
I want the possibility to send outdated material to second line areas without being replaced with new stuff all the time.

The changes to the production menu have to be one of the best minor changes, especially for idiots like me who produce every tank variant just so I can feel satisfied while loosing most wars because I dont have enough tanks.

Being able to delete old/captured equipment will be so nice!