Jump to latest Follow Reply
Menu
Install the app
You are using an out of date browser. It may not display this or other websites correctly.
You should upgrade or use an alternative browser.
Hearts of Iron IV 37728 After Action Reports (AAR)
Previous dev diary Next dev diary
Show only dev responses

Hello! As podcat noted in the prior Dev Diary, he is away this week at the Game Developers Conference in San Francisco, so I am filling in for him with a tech lead's perspective about our ongoing activities for the 1.6.2 open beta patch. (If you want to get access to the current open beta build, see the 1.6.2 beta thread for instructions.)

The content designers continue to patch up a variety of problems that have been reported. In particular, this will include fixes to the Battlecry and Awake and Angry achievements, and news events to inform players of relevant changes in the game state, such as naval treaties being removed.

I am also informed that we have two new popular field marshals, already a part of the available 1.6.2 open beta, Carl Gustaf Emil Mannerheim of Finland, and Mustafa Kemal Atatürk of Turkey: 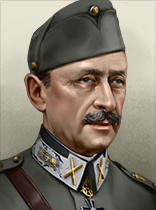 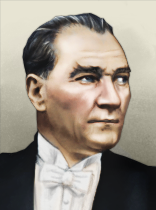 The programmers are also working through a number of issues of various sizes. These include improvements and fixes for naval interfaces, like a new mission warning icon that will help players detect when their task forces are ill equipped for their missions and explain why. Also, some of the rules and behaviors surrounding naval missions and assigned regions have been reworked to avoid weird or exploitable issues with distant and disconnected regions. We have also made some incremental improvements to the naval invasion AI to make it better coordinate the timing of multiple related invasion orders, and we are continuing to iterate on the invasion AI.

One area that we have been looking to balance is the ratio of screen ships to capital ships that the AI is choosing to produce. We know that some countries could stand to have more screens, but we don't want to push those numbers up too far, so that they end up with too few capital ships instead.

To help efficiently guide our balancing, we have taken advantage of a cool system that our automation testing team has provided, to log out various game stats that can be collected and graphed each night. This has given us a baseline to know what the current ratios tend to be for various countries. Then, after making balance changes, we can watch the numbers the following night to verify that the AI has adapted appropriately, instead of requiring the designers to manually run a game for an hour to find out if the changes hit the desired target.

Here are a couple examples of the current screen to capital ratios for the U.K. and Japan, over time (note that the numbers are multiplied by 10, but the ratios are actually from about 4:1 up to around 8:1): 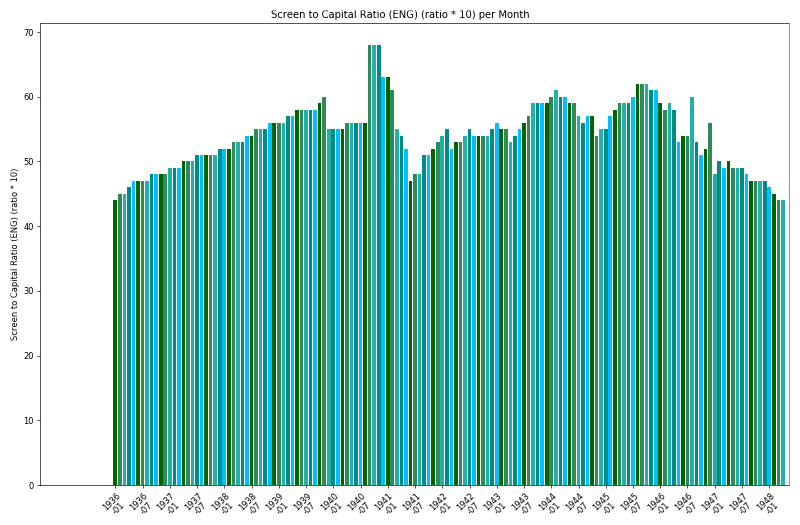 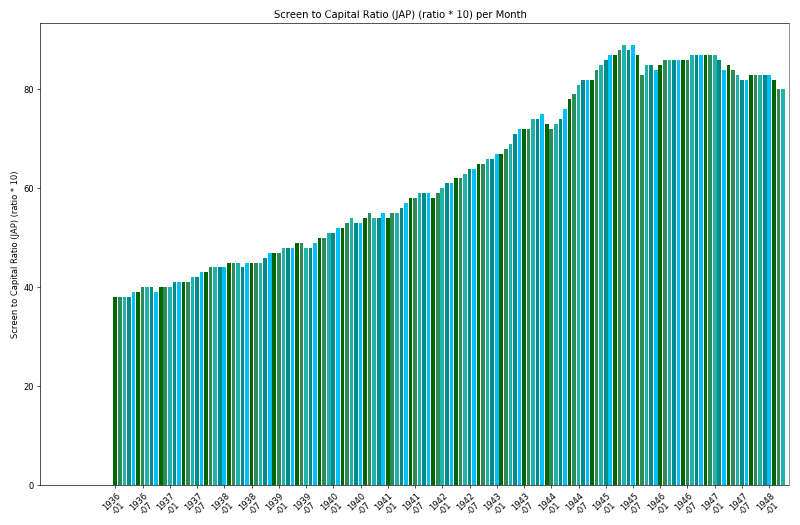 We hope to have an update to the 1.6.2 open beta patch with these and other fixes by the weekend. The current status of the open beta branch is documented here, and you can follow that thread for future updates.

One of the objectives Podcat lined for this patch was to help the allies (I guess UK mostly since they are the ones failing the worse before the Axis).

What can we expect from the new update of 1.6.2 in this regard?

I think China's and USSR bugs with inability to deploy their units is more gamebreaking than number of screens but, well, one bug at a time...

Are you working on naval transport AI as part of the naval invasion AI as well? IMO AI loses most of its troops while transporting between friendly provinces.
Toggle signature
"I certify to you that, with the help of God, we shall powerfully enter into your country
and shall make war against you in all ways and manners that we can, and shall subject you
to the yoke and obedience of the Church and of Their Highnesses. We shall take you and
your wives and your children, and shall make slaves of them, and as such shall sell and
dispose of them as Their Highnesses may command. And we shall take your goods, and shall
do you all the mischief and damage that we can, as to vassals who do not obey and refuse
to receive their lord and resist and contradict him."

This looks great! Although my biggest concern right now is how quickly Japan is beating China. It really throws off the rest of a historical save when Japan is winning the Sino-Japanese war in '39.

The automated testing looks very promising! Any thoughts on making it available for modders?

Andy Gainey said:
Also, some of the rules and behaviors surrounding naval missions and assigned regions have been reworked to avoid weird or exploitable issues with distant and disconnected regions
Click to expand...

I hope this will make ship ranges more relevant, as currently the stat is almost pointless (efficiency is not affected by range, so having access to 1 tile in a sea zone is sufficient; and range is computed from all friendly ports in the world instead of homeport).

I also hope this will make straits relevant, as they are by-passable now.

Andy Gainey said:
we are continuing to iterate on the invasion AI
Click to expand...

Will the bug that makes the AI less likely to use marines for invasions be corrected?

Great to see more efficient use of data in the game.

Interesting stats, Would love the same breakdown for Italy and Germany

Please give us more items for the naval designer

Scharnhorst being build with the wrong guns for example and not even meeting its historical speed of "31 kt"
"The ships were armed with nine 28 cm (11 in) SK C/34 guns in three triple turrets; plans to replace these with six 38 cm (15 in) SK C/34 guns in twin turrets were never realized"
https://en.wikipedia.org/wiki/Scharnhorst-class_battleship

- All these improvements coming with the patch: soundsgood.jpg

-Mannerheim added to the game:

Scare me, I thought there is Erdoğan beside Atatürk。

That´s bad with the news. I like the Naval Treaty news and such. Such News make the Game very interessting.

Otherwise you have to Mod the most inertesinting news in again.

Only make the Newspaper bigger and you can read it fully. That´s easy to fix.

Oh boy finally Atatürk is commander, I wish we could have option to avoid his early death cause of alcoholism... maybe this is a hint for next update? wink wink

What about too strong divisional AA killing CAS planes?

@ Kaszub: That´s a good Question. The normal Infos from Research and in the Army / Ships are correct. There must be a bug in the battle-calculation.

I had this discussion in the German Part here too, and thougt firstly they don´t push the maneuvering and durability of the Planes.
L

It looks like that USA has difficulties with invasion into Japan islands in Pacific and USSR to hold against Germany. Are there any plans for improvements in this or later patch?

Leinad965 said:
It looks like that USA has difficulties with invasion into Japan islands in Pacific and USSR to hold against Germany. Are there any plans for improvements in this or later patch?
Click to expand...

If the Allies had not opened a second and third front in Europe it was certain that the victory of the Soviets in the Eastern Front could have taken a few years more and millions of lives.

If that is the situation in real life with a far weaker Germany imagine the situation here with a stronger Axis. The problem here is not that the Soviets need further buff, but that the Allies are unable to hold onto Egypt let alone to open a second front in Europe as the USSR wanted

Short dev diary, bigger issues that ruin the experince are not hot fixed (AI not deploying troops, Allied AI not using navy) are way too important and ruining the game experience, 1.6.1 have way too many bugs, 1.6.2 while adds 2 generals(what about other nations that severly lack generals like DoD countries?) doesn fix the half of the reported bugs. What is happening?
Show hidden low quality content
You must log in or register to reply here.
Share:
Facebook Twitter Reddit Tumblr WhatsApp Share Link
Top Bottom