Jump to latest Follow Reply
Menu
Install the app
You are using an out of date browser. It may not display this or other websites correctly.
You should upgrade or use an alternative browser.
Hearts of Iron IV 40700 Bug Reports 11864 After Action Reports (AAR)
Previous dev diary Next dev diary
Show only dev responses

Hi everyone! I hope you are enjoying Waking the Tiger With the 1.5.1 patch released last week the team has now started on 1.5.2. Today won't really be a big diary, but I figured we could highlight some of the changes every week as they are done rather than have a diary break while the patch work is ongoing. The idea is that 1.5.2 will be available as an opt-in beta on Friday (barring QA veto), but we will be rolling out updates to it until its ready for release. Real release is at least 2 weeks away.

Making organizing commanders easier
People seem to really like our fantastic future tech dubbed “Drag-and-drop” (pending trademark registry), so based on community feedback we have decided to implement this in more places. You can now reorganize your armies and army groups by simple dragging them around (we are working on a similar thing for the theater overview to allow it there also).

XP gain on commanders and divisions
There have been a lot of conflicting feedback on how fast your commanders level up and gain traits. Some say it’s much too fast and some say its prohibitively slow. We did a quick fix for 1.5.1 to try and smooth out the progression curve, but realized we really needed to do something more radical. The issue is that its very playstyle dependent since XP is rewarded for every hour in combat. This essentially means that if you play well, pull off encirclements, use concentration of force or overrun the enemy you get very little XP compared to someone who is just throwing bodies at the enemy to slowly wear them down. To deal with this we are changing how you gain XP:
Hopefully these changes should help balance the radical differences between long and short battles and reward players who play smart while not negatively impacting the brute force method too much. We’ll be relying on feedback on how this feels during the open beta process to see how it pans out.


Multiplayer desyncs
Looking at statistics from our backend 1.5.1 seems to have improved things and it’s now back to the same level as before Tiger was released. However we still see reports, so we have developed some new tools to help us as well as potentially fixed more cases. We are hopeful about improvements here as well for 1.5.2. Again, we’ll be relying on feedback in the open beta later for this as well.


Doctrine cost changes
With the infamous doctrine-swapping-for-free exploit gone we felt that the cost of switching was perhaps a bit too high now, scaring people from changing up things. To make that a fairer choice starting level of land doctrines now cost half of what they used to (so in line with other techs), making a switch still a serious tradeoff you need to think of, but not as delaying is it is now. The reason it’s not just free is at the heart of HOI4. You step into the shoes of the nation at a historical point in time, so you should need to deal with their current situation. Switching army wide doctrine is one of those things, just like division templates or low war support or stability.


Polish and German border changes
Though some effort was made to adjust states to make german historical WW1 borders possible, as this thread shows, things were still not completely up to scratch. I (Bratyn) decided to put in some of my personal development time to brush up on my map-painting skillz and improve upon what we had already done.

1. The two Polish provinces slightly south-east of Danzig, 6347 and 6321, which previously formed a weird protrusion into Prussia, have now been reshaped with a more east-west horizontal border, with the northern province (6347) being added to the Danzig state. Once Danzig is taken by Germany, this now creates proper borders for Eastern Prussia.
2. I made a minor adjustment to ‘flatten’ the border in the little bit jutting out around Strzelno (I felt it was too pronounced).
3. The two Polish provinces on the tip of Silesia, 506 and 6464, have been reduced in size and remodeled, with the freed-up space going to the provinces around them, as well as a new province (13205) created for the Krakow state. A new state has been created (“Voivodeship Silesia”), to which provinces 506 and 6464 have been added, making it possible to transfer this state via events to Germany, much in the same way as is already done with Poznan and Danzig.
4. While I was at it, I figured I’d fix a personal pet peeve, as well. I reassigned provinces to states all over Eastern Germany, ensuring that the borders between these states now follow the Oder river. I also redrew the borders of the provinces (3514, 3572, 6595, 9535, 11415, and 11517) to follow the Neisse river (which is not shown on the HOI4 map), as well as those of province 6282 (Stettin). This now makes it possible to recreate proper modern-day eastern German borders, for those of us who enjoy that kind of thing.

All of this also involved relocating some industry, air bases, and population from certain states to others, but this should not have much effect on gameplay. Unfortunately, the end result does mean that savegames will have… An unfortunate gap in the map where Voivodeship Silesia is located. Starting a new game when signing up to the Beta or when switching to the patch is recommended, as not doing so may result in some weird stuff (such as units present in those provinces beforehand being perpetually stuck there). This is also the reason why we tend to be conservative with making map-changes, and this is unfortunately unlikely to change.


Hats! The people want Hats!
In our ongoing efforts to increase the number of great hats in the game, we have decided to add Paul von Lettow Vorbeck to the German lineup. Best known for his campaign in German East Africa during the Great War, von Lettow-Vorbeck is available for recruitment through a decision after the Kaiser has returned. Given the terrain he fought in during the war, we decided to give him the Jungle Rat trait as well as a pretty good logistics score. 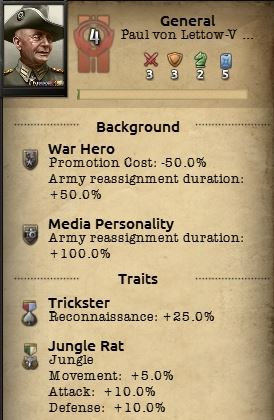 There are of course also a slew of smaller change and fixes we have had time to do, but we’ll leave that for the eventual changelog. If your pet peeve was not mentioned check out last weeks diary covering the main areas we will be working on as this diary was to highlight stuff we had already done.

Next week we will have another update as well as showing off a really really cool thing for modders we have been working with on the side. Stay tuned!
Last edited: Mar 21, 2018

Split Ostprussen into 2 parts and it will be ideal

The changes to XP alone make it worth signing up for the beta, for me. Awesome!
Toggle signature
Antifa means anti fascist. I am anti fascist. Wait, what?

Those are nice changes!

If you took up a rework of possible post-war borders, you should devide Eastern Prussia into 2 provinces. In real life Poland got most of the land, but north part with Königsberg was taken by USSR.

Commander of the Ladybug army

Have you done anything about or have any comment on leaders gaining experience for things they don’t command such as someone leading plain foot infantry ending up gaining the cavalry leader trait before infantry leader.
Toggle signature
Bug

For real though, it's nice to see that the German-Polish border change recommendations were put into effect so quickly. Since you already redrew the map, can I recommend splitting off that ugly "spike" on the state of Serbia, so that pre-Trianon Hungary borders can be restored?

I hope we get provinces with actual names sometime.

Love the changes to xp it should suit my play style better.

puppet on a string

hey @podcat this looks good i just registered to ask if you will release the battleship cosmetic dlc that people have been seeing on dev streams, and also you should add a new state for picardie so that pays de calais is split in half and the reichskommisariat belgien has correct borders, thx

oh and the italian focus to befriend japan has never worked, it just improves relations with itself, just an fyi, easy to fix, oh and france still doesn't have a motorized icon (but thx for the weapon gfx, they are cool)

Great diary! Also, if you guys are changing states in the game maybe you should remodel some in Yugoslavia so we can have proper WW1 austro-hungarian borders (I.E. the little tumor that sticks out of the state of Serbia).

Combat in 1.5 is significantly slowed down now, and its much slower to attack. As a side-effect Multiplayer games have about 1-2 hours added to them given how long it takes to push each tile even with land and air superiority, even single player world conquests take a lot longer.

Well, at least now changing from terrible Mass Assault to something useful will not be such a punishment for USSR.

Yes, more drag and drop! Love it! Keep up the good work. Oh and the revised german borders are great.

Happy to hear about the XP changes. Had to go to war against the Soviets to get the last bits of Japanese cores in my Qing run and even though I used one and the same field commander during the entire campaign, fighting China, Japan and the Soviets, he was still only level 4 by the end. And I do not consider myself a good player. Hopefully this changes things.

@podcat - please allow us to sort divisions by experience as well as type!!!!!!
Toggle signature
"In wartime, truth is so precious that she should always be attended by a bodyguard of lies."
Sir Winston S. Churchill

"Wars do not make one great."
Yoda

"It is foolish and wrong to mourn the men who died. Rather we should thank God that such men lived."
General George S. Patton

Are you planning on fixing the lvl10 Field Marshal achievement tho?
Toggle signature
Powderkeg of Europe - Victoria 3 Balkans Megathread