Jump to latest Follow Reply
Menu
Install the app
You are using an out of date browser. It may not display this or other websites correctly.
You should upgrade or use an alternative browser.
Hearts of Iron IV 37729 After Action Reports (AAR)
Previous dev diary Next dev diary
Show only dev responses

Hello, and welcome back for the first in a series of dev diaries that will showcase the changes to the naval system beyond just building and designing new ships (aka the Kaiser Wilhelm Memorial Game Mode).

Today we will look at new mission types and changes to the naval interface. As we are still in development, you may see some stuff that is not strictly speaking finished (no matter how much Dan wants the hot pink coder art to go into the final build!)

As part of the rework, we have changed the Patrol as well as the Search & Destroy mission. While patrol still does mostly the same thing, Search and Destroy is gone and has been replaced with Strike Force. In the old system, the main difference between the missions was how many ships you had at the start of the battle.

Now that is gone, and the primary difference is that Patrol sends the ships out to, well, patrol, while Strike Force makes the ships sit in harbor until a patrol has found an enemy. This is particularly useful if you want your fuel-hungry battleships to remain in port and not use up your precious fuel until you know there is actually something out there to sink.

Finding the enemy is the main purpose of the Patrol order, so you’ll want your ships with good surface detection values to make up the bulk of your patrols - particularly destroyers and cruisers, ideally equipped with Radar and/or floatplanes. If there is an enemy in a zone you patrol, you’ll gain spotting on them, which essentially goes from “there is something out there” to “It’s the Bismarck and Prinz Eugen!” (at this point HMS Hood sorties to destroy them, in an easy and painless victory for the Royal Navy). Weather, terrain and the amount of ships committed all affect how fast you gain spotting. If you time it right, your big ships might be able to break out into the Atlantic before the enemy knows they are there. Depending on your engagement level and enemy strength, your patrol group might just decide to deal with the enemy directly, without even calling in the big guns.

As we mentioned before, your fleet is now made up from several task forces, each of which can have its own mission. Fleets are organized in Naval Theaters. While you can assign any number of sea zones to a fleet, a task force can only ever be in one place (with a few exceptions), so in order to cover all the zones, you should aim to have at least as many task forces as you have zones assigned. However, a single Strike Force can support several patrol task forces except that it can only support one combat at a time, so your poor little patrol force may find itself severely outgunned because your main force is off helping another patrol.


(Art is not quite completely totally absolutely final on this one)

Every fleet can be led by an Admiral, and can only control a certain number of task forces. Since every task force usually only covers a single zone, you’ll want to make sure you have different fleets covering different parts of the globe. Particularly as a raider you will also want to cover a larger area to force the enemy to spread out more.

You can customize your fleets and task forces with insignias and colors to keep track of them, much like with armies: 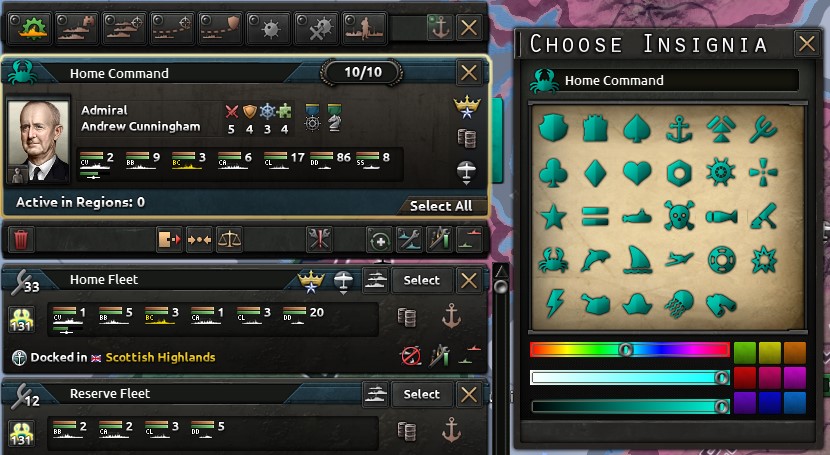 Convoy Raiding still works much as you are used to. However, we have changed the convoy raiding impact to be a weekly tick rather than a flat modifier, so sinking convoys will bit by bit reduce war support for the country that loses them. More info on this comes in a future dev diary dedicated to raiding and subs.

Convoy escort task forces can be assigned to cover several zones and will try to defend any convoy in them. If you are too spread out and subs catch the convoys, few if any escorts will be available to defend it. 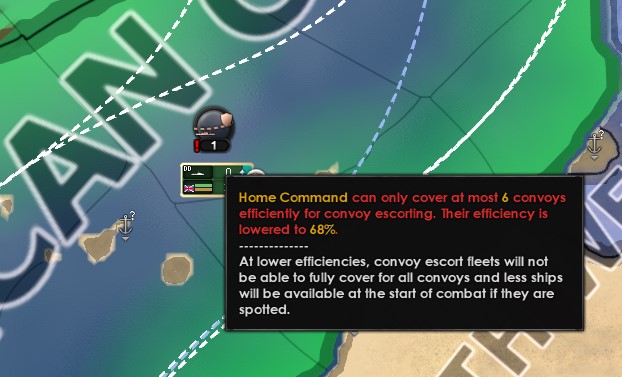 Beyond that, we have added Invasion Support. A task force set to Invasion Support will defend transports in the area and remain off the beaches to provide naval gunfire support - ideal for your old battleships that just don’t cut it anymore against more modern opposition.


In addition, mine warfare is conducted by mine laying and mine sweeping missions (although mine sweepers also provide a passive bonus to moving through minefields so you might want to add them to your other task forces as well), and naval exercises give ships experience as well as provide Naval Experience to design new ships with - at the cost of fuel.

Newly built ships are automatically added to a Reserve Fleet, which exists on the theater level. Ships in that fleet reinforce other task forces in the same theater. You can set up Task Force templates that the game will try to create from the available ships in the reserves, and will try to keep up to strength as best it can. If you don’t want to reinforce a unit because, say, it is the US Asiatic Fleet and the Japanese have just declared war, you can disable automatic reinforcements for each individual task force.

If you don’t want to micro-manage your task forces to this degree, we have added an auto-balance function that splits your existing task forces into several, trying to maintain a strike force and one or more patrol task forces.

That is all for today. Next week we will focus on a different part of the naval rework. Don’t forget to tune in for the stream at 1600 hours CET, where we continue with Mexico for another week.

The best part is this reserve fleet thing, I think.

Fiddling with fleet reinforcements was a bit awkward at times.

Nice, if a little short/ kinda a rehash of already known information c:

Also..
Since you mentioned invasion support, I have a question.
Why there isn't a firing animation used during shore bombardment?

There really should be an animation where the ships are firing their guns when they are involved in shore bombardment.
Would be cool if you could add this.

I’m so excited about the reserve fleet and fleet template!

Hypothetically then, an admiral can patrol up to 10 seazones right? Because they can create 10 task forces

Most of these features were already briefly touched upon previously, still nice to see them regardless.

Will there be any nation-specific fleet and taskforce insignias?

...Where is the hot pink coder art? I was promised hot pink coder art.
Toggle signature
Good Morning! How does it feel to be strapped into a walking nuke reactor at 6 a.m.? Bet you wish you studied harder in school eh?
Heh heh, hit that throttle! You'll be killing people before breakfast today, mostly soldiers, maybe some civilians.

I would buy the DLC just because of the Crab and Jellyfish insignias.

This looks amazing, and great job. I can really feel that this is going to be an amazing revamp of naval warfare, and I'm liking everything I see so far.

My question is: do admirals only control fleets, or individual task forces beneath them too? It looks from the interface like there isn't a field marshal / general split here, but I remember the naval traits screen (a previous dev diary) suggesting this would be the case.

Archangel85 said:
If you time it right, your big ships might be able to break out into the Atlantic before the enemy knows they are there.
Click to expand...

Can a TF on patrol track more than one enemy fleet at once? If the enemy has only one fleet on patrol, can I send out a sacrificial TF first to be spotted and then push my raiding TF through unmolested?

Looks awesome! Is there a setting to put strike forces on to prevent them from attacking if they have to many damaged ships or haven’t been replaced up to strength?
Toggle signature
AARs:

Will there be any support fleets to help out ships in the field? Oilers, destroyer tenders, etc.?

BTW, the new Invasion Support mission is exaclty what has been missing and I am really glad to be added. Now I don't have to see my invasion force getting slaughtered whiles my fleet is busy fighting elsewhere.

The Master of Nothing

This looks good.
Toggle signature
"He has all the virtues I dislike and none of the vices I admire." - Winston Churchill

Interesting stuff! Hopefully the changes will mean the player has real incentive to keep fleets stationed around the world, the way naval powers in real life do.
Toggle signature
In 1939-44 the Finnish military destroyed or put out of action 1.5M-2M men, 3k-3.5k aircraft and 3k-3.5k tanks of its enemy, Soviet Russia, at the cost of some 294k men, 240 aircraft and 50-70 tanks destroyed or put of out action in combat. This martial effectiveness combined with the overwhelming materiel and manpower advantage the Russians enjoyed at nearly all times, makes it a unique achievement in military history.

The only thing is that wordings like " the first in a series of dev diaries", "still in development" and "future dev diary" all point towards a 2019 release.

The only thing is that wordings like " the first in a series of dev diaries", "still in development" and "future dev diary" all point towards a 2019 release.
Click to expand...

@Archangel85 What is the connection between the Reserve Fleet and the repairing ships? When a fleet detaches a ship for repairs, does Reserve try to reinforce it? Temporarily? Or damaged ships go to Reserve automatically? How does that work?
Toggle signature
AIR / NAVAL WARFARE FAN​

EntropyAvatar said:
Can a TF on patrol track more than one enemy fleet at once? If the enemy has only one fleet on patrol, can I send out a sacrificial TF first to be spotted and then push my raiding TF through unmolested?
Click to expand...

When it comes to invasions/transports it does that, but not for other task forces. it might be something that changes tho


Osterreich Will Rule said:
Looks awesome! Is there a setting to put strike forces on to prevent them from attacking if they have to many damaged ships or haven’t been replaced up to strength?
Click to expand...

oh yeah, there are aggression settings that control that stuff. there is also a separate setting for when to go and repair.
Toggle signature
Reject reason to make the impossible possible!

“It’s why we must focus on our own well-being in the present,” Aslan said, “and build as many trains as we can before dying.”
“To trains,” Lucy said, and they all raised a meaningful glass.
Show hidden low quality content
You must log in or register to reply here.
Share:
Facebook Twitter Reddit Tumblr WhatsApp Share Link
Top Bottom