Jump to latest Follow Reply
Menu
Install the app
You are using an out of date browser. It may not display this or other websites correctly.
You should upgrade or use an alternative browser.
Hearts of Iron IV 37708 After Action Reports (AAR)
Previous dev diary Next dev diary
Show only dev responses

Hi everyone and sorry about the late diary (Swedish winter is heavy on sickness attrition!). Today we are going to talk about military leaders and how they can now grow and be tailored to your needs!

Traits and Leader Details
When we added the chain of command feature to Waking the Tiger we wanted to make sure players care more about their generals and field marshals and feel like they grow and level up. We also wanted to add more personality to leaders. To accomplish this we now have several kinds of traits. The old traits you are familiar with are now called Earnable Traits. Something you gain by doing something, like earning the “Desert Fox” trait by fighting in the desert. Then there are General Traits which are something you select yourself to assign to leaders. These will have prerequisites of different kinds. There are also Field Marshal Traits - which unsurprisingly only apply to field marshals (remember, field marshals with Waking the Tiger now lead other leaders). Finally, there are background or Personality Traits as well. As you can see in the picture below, Manstein has a background as a Brilliant Strategist, which increases his base stats. 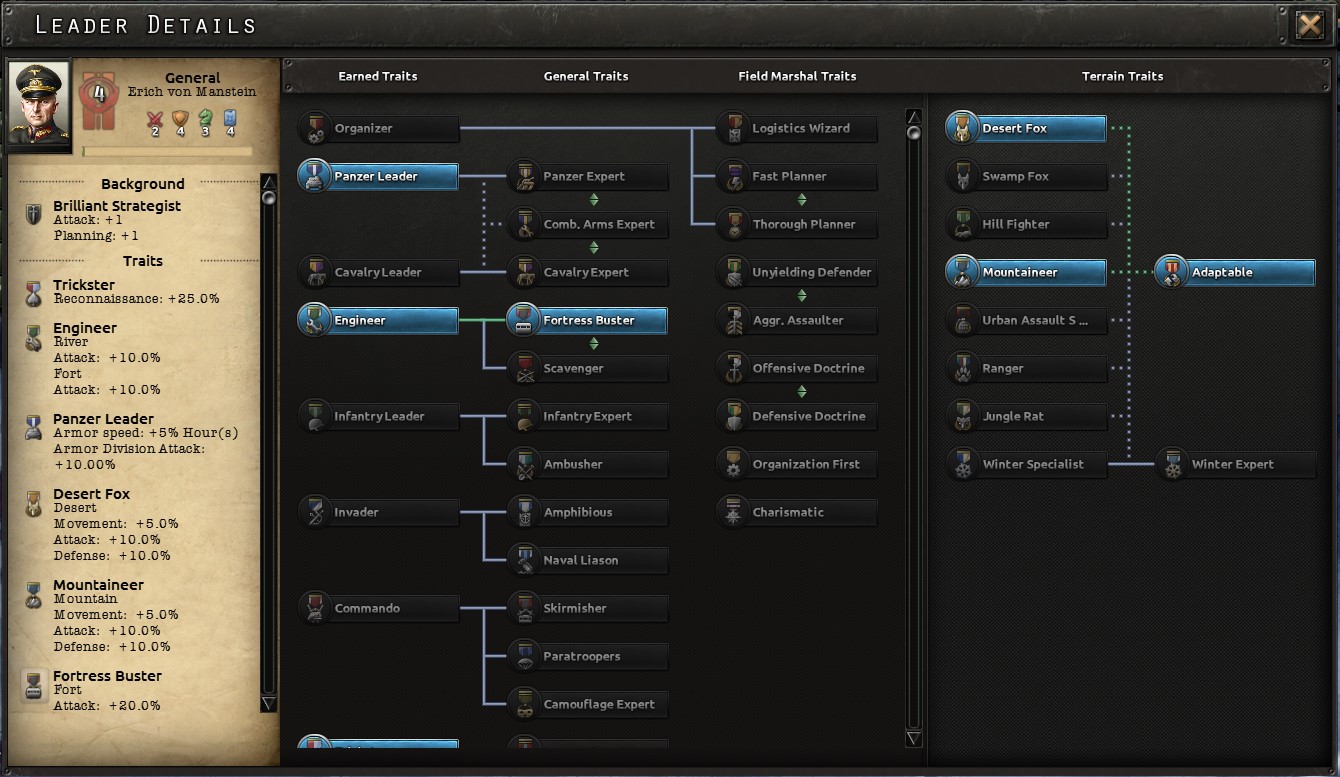 We are still working on the personality traits, so I won't go into too much detail on them just yet. Usually they affect the leader’s base stats or make certain traits easier to gain (so someone with a background in tanks might be quicker to pick up the “Panzer Leader” trait). We also use these to model change in nations like the “Samurai Lineage” one (more on that once we cover Japan). We also have some “status” traits like “Wounded” where a leader may be left at lower capacity after an ill fated combat or “Sick”, which can be gained by trying to develop a video game in Sweden during the winter or by staying in high-attrition areas for a prolonged time.

To make managing easier we have also updated to leader selection screen so that you can sort and filter easier (type “Panzer” in the quick search field will get you all panzer related leaders for example). 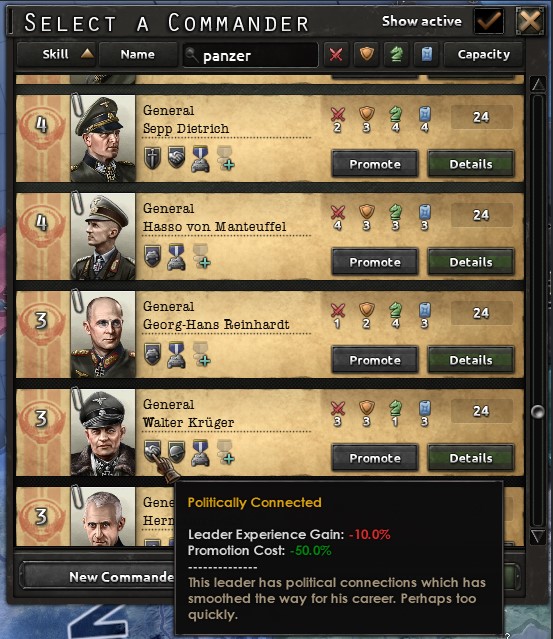 Bonuses from traits and skill levels for your field marshals transfer down as well to your divisions, but at a reduced rate (right now you get 50% of the bonus, but no number is final) and you no longer lose your general traits when you promote to field marshal. When it comes to slots for assignable traits those are gained as your leader levels up.

“The Red Phone”
Many of you may have been wondering about the new topbar icon and it’s finally time to start talking about it today. It’s a new resource called Command Power and it symbolizes the ability of the government to go in and directly mess with the military - much like Hitler would use his red phone to bypass chain of command or prioritize things. Command power is used for promoting generals, taking certain military related decisions, managing air supply, assigning traits to generals who qualify and using command power abilities to affect divisions. There are also two more features that use them we will cover in future diaries.

These command power abilities are mostly unlocked by traits and apply to divisions under the general. They cost command power to trigger and run for a certain amount of time giving bonuses or other effects which offer up some neat new tactics. 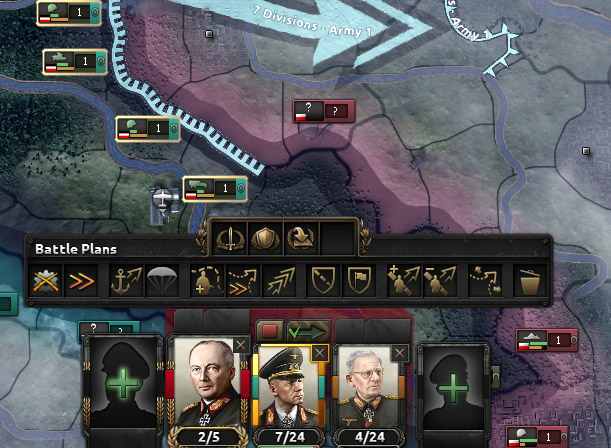 Here is a breakdown of the abilities:

Force Attack - Units gain attack bonuses, take no org damage while attacking, but take increased strength damage. They are also unable to retreat from attacks when this is active. As the active units take damage this will also hurt your nation’s war support.
Last Stand - Similar to Force Attack but when on defense. Use it if you must absolutely hold somewhere no matter what while attacking elsewhere. We also have some national flavor version of these for China and Japan.
Probing Attack - Divisions can launch attacks without losing entrenchment, but have a penalty to attack while doing so.
Staff Office Plan - Increases planning speed for the cases when you need to finish and launch a new plan quickly.
Siege Artillery - Combat bonus vs fortifications and also increases damage to the fortifications themselves substantially.
Glider Planes - Used in combination with paratroopers they let you drop more paras per transport and give them a boost to organization and defense towards enemy AA.
Makeshift bridges - Gives a substantial reduction to the river crossing penalty.
Extra supplies - Increases the time troops can be without supplies before suffering penalties.
Naval Assault Plan - Cuts down time needed to complete preparations for naval invasions.

Command power abilities, assignable traits and the new leader details view are part of the DLC. Most of the personality/background traits are part of the 1.5 “Cornflakes” update.

Next week we are going to, among other things, talk about how to make your troops deal with harsh weather. See you then!

The team is adding so many cool things! Loving the new command system. Influencing battles with strategic decisions is so exciting. Reminds me of a battle for Berlin or Stalingrad. It would be cool to be rewarded/penalized if one looses the province they had last stand enabled for (vise versa for Force attack)
Last edited: Nov 29, 2017
Toggle signature
Atrocity is recognized as such by victim and predator alike, by all who learn about it at whatever remove. Atrocity has no excuses, no mitigating argument. Atrocity never balances or rectifies the past. Atrocity merely arms the future for more atrocity. It is self-perpetuating upon itself — a barbarous form of incest. Whoever commits atrocity also commits those future atrocities thus bred.

Thanks for your patience! We got the diary here in the end 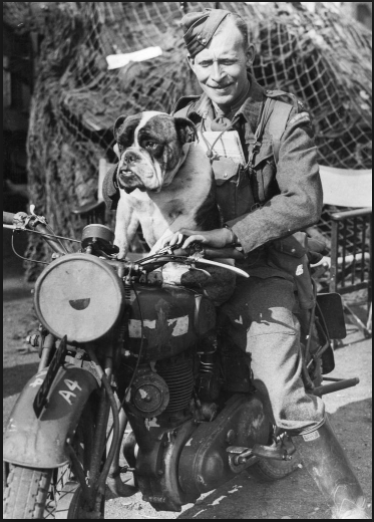 Will this help them shoot down missiles?

I know this is fairly unrelated but could you make it so both sides keep the focus tree in the German civil war so that if fascists win they won’t be left with a generic tree.

You could maybe auto do the Rhineland focus for them.
Toggle signature
Greenland mod I made: https://steamcommunity.com/sharedfiles/filedetails/?id=1203745183&searchtext=

Lads this might as well be the Art of War of Hearts of Iron 4 .

MrLevenstein said:
Lads this might as well be the Art of War of Hearts of Iron 4 .
Click to expand...

Will there ever be an official converter for HoI4? Will HoI4 ever have horse cultured countries? What kinds of national focuses will they get?
Toggle signature
Nationality: British
Religion: Sikh
Ideology: Inqilab zindabad!
Issues: Total robocide, trouser abolitionism (NEW!)
Current Occupation: Moroccan occupation of Western Sahara

Wew, while the new system looks neat, I wonder if choosing your generals/field marshals trait is a bit too ... weird? The generals are still free to choose their own trait. IMHO, maybe instead of the leader choosing the trait, the leader only "directs" the trait, so add major modifier for learning/rolling a dice to earn an advanced trait.

The most important takeaway from today though, is most assuredly, "QING DYNASTY HYPE!!!"
Toggle signature
Genius only pawn in game of life.

This is really good!

How much of this will be in the expansion and how much in the Patch?
Toggle signature
Calm Before the Storm [WIP Hoi4 Mod]

Minor thing about German grammar in the Unit DIvision names: One of them is called "Thüringisches Division", it should either be Thüringische Division or Thüringer Division, the first one is incase of an adjective, since Division is female in german, so the -es Suffix doesnt work, since its for neutral words and the second one would be incase of both words being Nouns and Thüringer reffering to a place (similar to the sausage Thüringer Rostbratwurst)

Would it be possible to have the general traits underneath the earned trains on the list of traits. As a step out to know which relates to the other. it would clean up the left side of the leader detail section.

I'm confused which traits are part of the update and which are dlc.
Toggle signature
Better Airzones for HOI4: https://steamcommunity.com/sharedfiles/filedetails/?id=1494516854

It's a bit sad to see siege artillery and glider planes abstracted away into a magic button that makes them appear out of thin air (or rather experience?) in a game with a production system as good as that of HoI4.

Thanks for the DD podcat it looks very good
Toggle signature
"An appeaser is one who feeds a crocodile, hoping it will eat him last.".........Winston Churchill
“Do I not destroy my enemies when I make them my friends?” ............ Abraham Lincoln