Jump to latest Follow Reply
Menu
Install the app
You are using an out of date browser. It may not display this or other websites correctly.
You should upgrade or use an alternative browser.
Hearts of Iron IV 40670 Bug Reports 11843 After Action Reports (AAR)
Previous dev diary Next dev diary
Show only dev responses
Hello, and welcome back to the next DevDiary for the upcoming DLC! Today, we will talk a bit about how we are going to represent Vichy and Free France during the war.

Vichy France is perhaps the best example for what I like to call “trying to fit a history-shaped peg through a mechanics-shaped hole”. They were a puppet state of Germany by any reasonable metric - except they never formally joined the war. They weren’t at war with the Allies - and yet there were several battles between Allied and Vichy forces in Syria, Madagascar and most famously Dakar and during Operation Torch. Even after the battles were fought, however, Vichy France did not join the war, and the Vichy French troops engaged there were usually repatriated by the Allies after operations were over.

Currently, the division between Vichy France and Free France is handled by creating a civil war in France and Germany puppeting the fascist side. This automatically solves a number of issues that come with the sandbox nature of the game, such as dividing the military the player built instead of relying on pre-scripted OoBs, making sure both sides start with the same technology base and so on. It does, however, immediately put Vichy into war with Free France and (usually), by extension, the Allies.

To really do this situation justice, we decided to make special focus trees to handle it.

My design goals were to have


Thankfully, we now have the ability to essentially run the civil war creation effect without actually creating a civil war. This does split the country, reassign the military, split the stockpiles, give both sides the right technologies and so on and so forth. This makes the whole process a lot less painful and reduces the number of edge cases, because as far as the game is concerned, Free France and Vichy France both qualify as France under the right conditions. 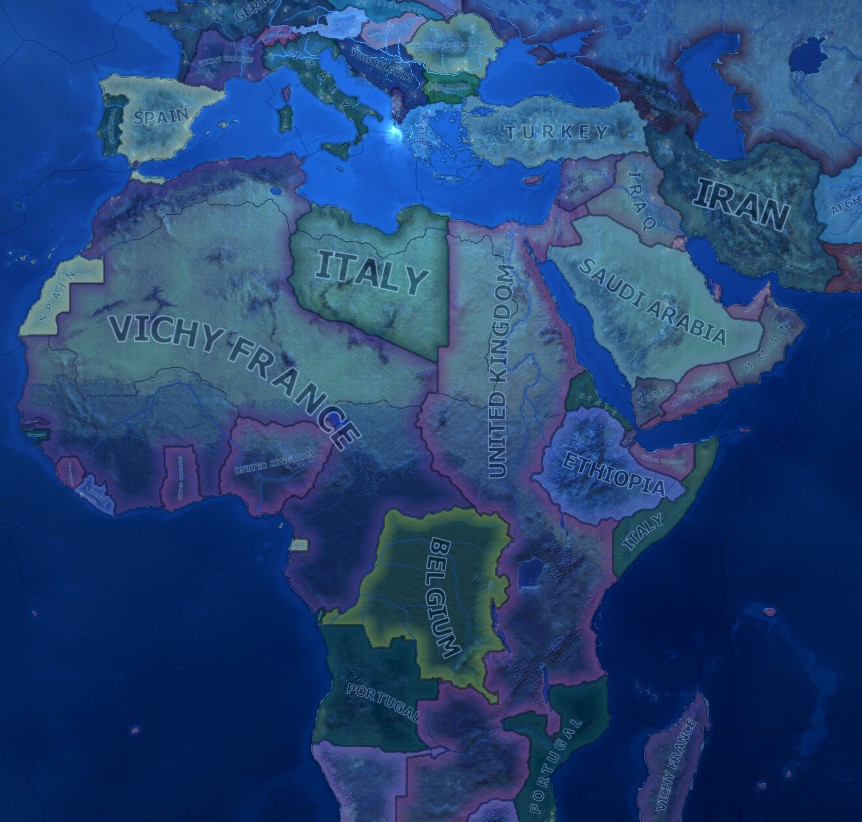 Another small change is that if you manage to get war support above 70%, a third option appears in the event about deciding between asking for an armistice or creating the Franco-British Union, allowing you to continue the fight. If you decide to surrender, the country is split between Vichy France and Free France, much as you are used to. Most overseas territories will initially go to Vichy France, as was historical, with Free France holding onto a few scattered island possessions. Both countries load a separate focus tree.

Free France has two main storylines to follow. On the one hand, you’ll want to recover territories that are held by Vichy. For the purpose of making things more manageable, the French colonial holdings are separated into a number of larger areas instead of being separated by modern national or period-appropriate administrative borders. These areas are: Syria, North Africa, West Africa, Central Africa, Madagascar, and Indochina. 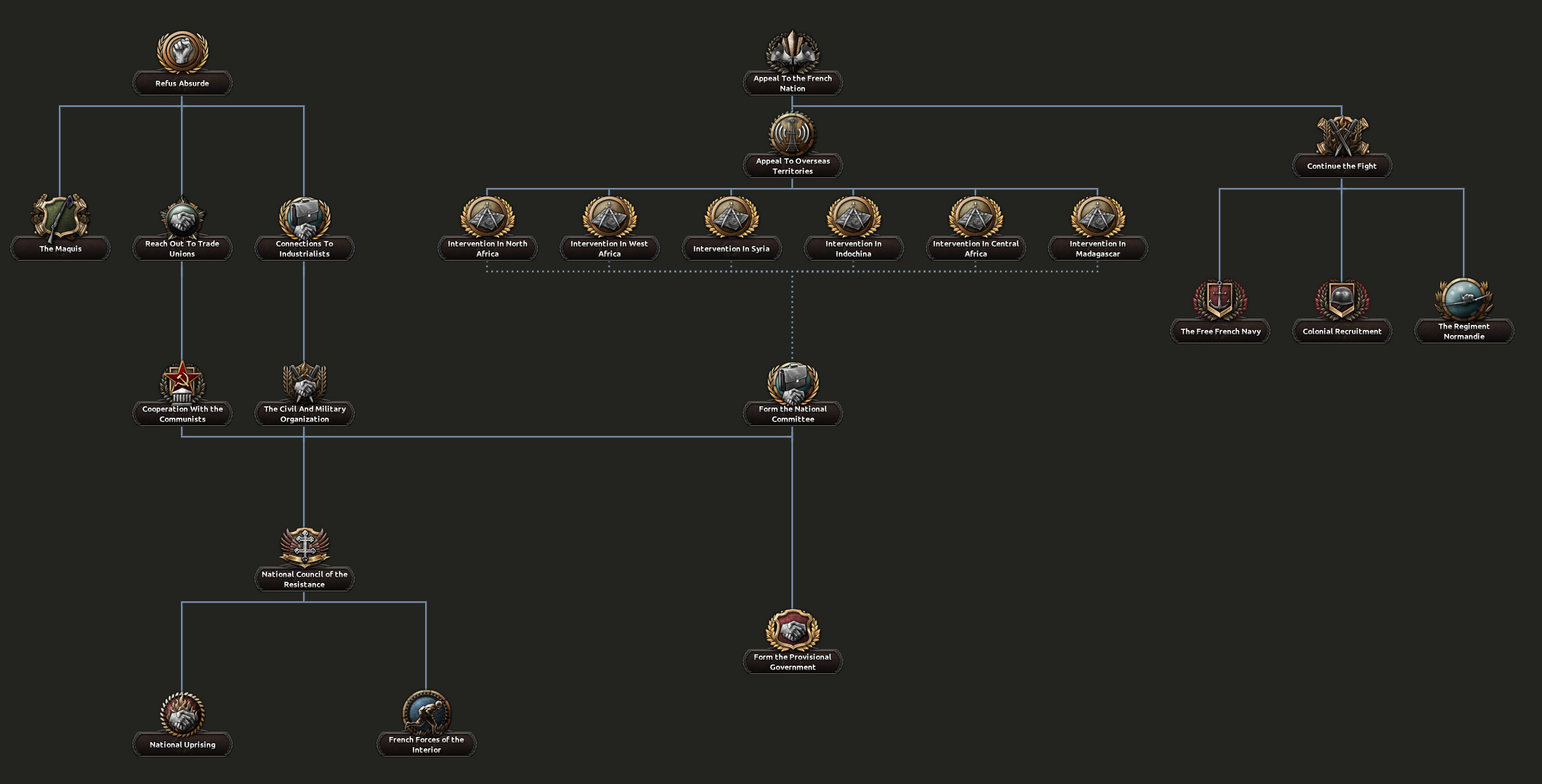 Appealing to them directly through the focus has a chance to flip a few of them to your side, but the rest will have to converted by more direct means. One option is to promise the territory independence after the war, which has a chance to convert the territories and reduces resistance/increases compliance in the affected areas for the duration of the war. However, once the war is over, these areas will demand that you honor your commitment and let them go. If you refuse, you will quickly find yourself with a rather upset population resisting your administration, like France did historically in Indochina.

Option two is to intervene militarily, in areas that you have access too. This takes the form of the border wars, allowing you (or, more likely, your allies) to take over territories from Vichy France without going into a full-blown war. Not all areas can be taken over by border wars - Madagascar doesn’t border any other state from which an intervention could be launched, so you’ll have to find a different way. 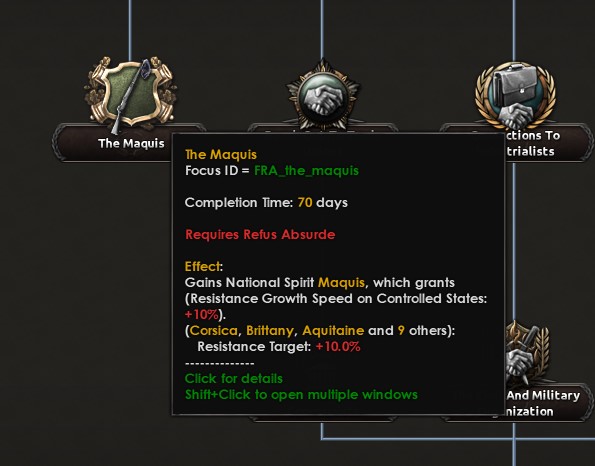 The other large branch for Free France is establishing and improving the resistance working in France. Through a number of focuses, you can boost resistance targets all across occupied France and turn the entire area into a hotbed of resistance - even if you do have to make some unlikely alliances between Communists and Industrialists.

Once you have recovered the homeland and taken back Paris, you can form the Provisional Government, which reloads the original French focus tree. Should Vichy France still exist by this point without being at war with you, you get a decision to demand reunification. 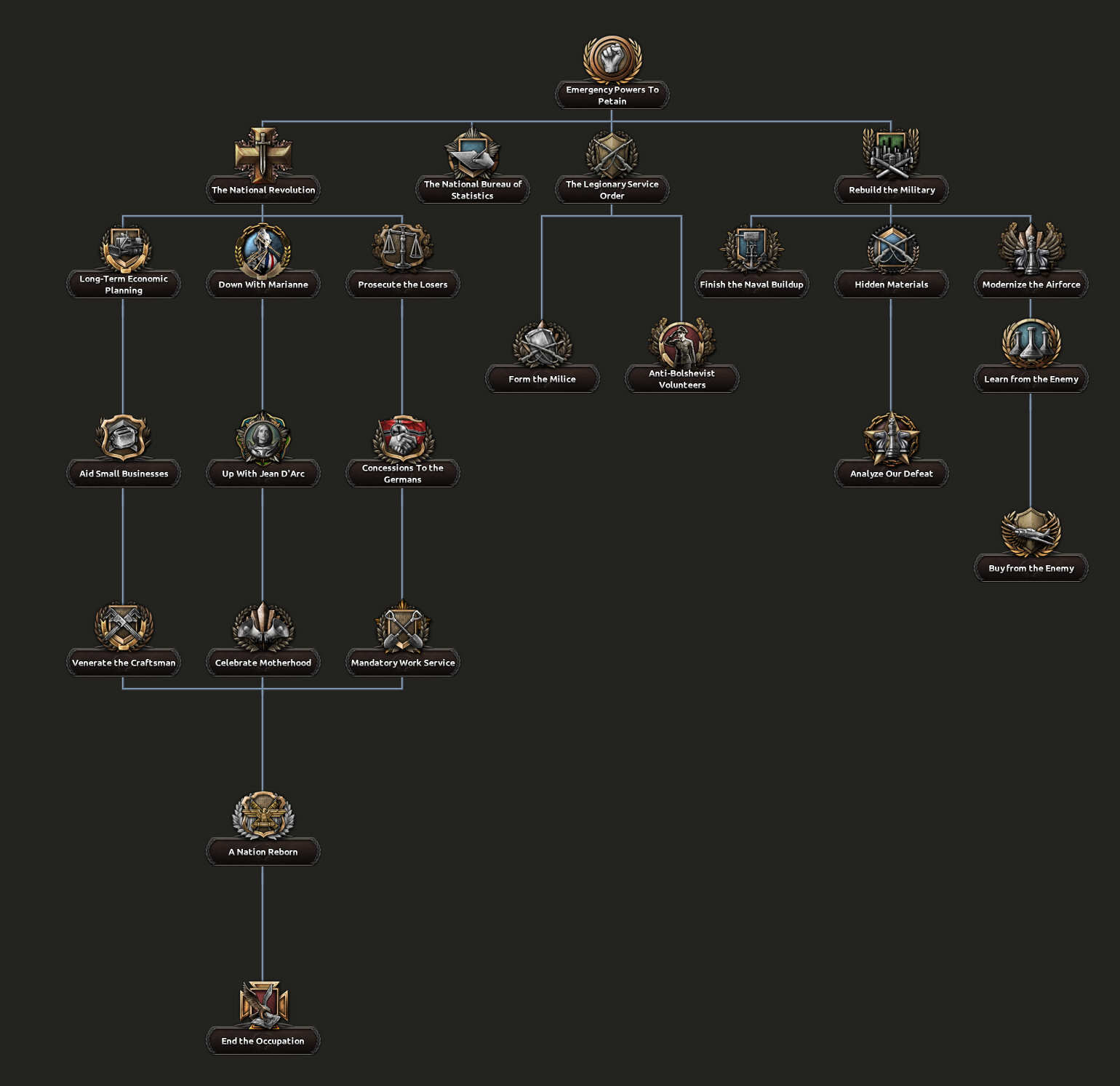 On the opposite side, the biggest change is that Vichy France is no longer considered to be a puppet of Germany. Puppets are heavily weighted towards joining their master’s faction and towards following a call to arms if in a faction. I briefly considered making a special puppet level that could refuse a call to arms and set a number of scripted AI strategies to make it do so, but decided that a one-off puppet level was easily as much of a hack solution than just not having Vichy be a puppet in the first place and handle its relationship with Germany through other ways.

As Vichy France, your big task is to complete the “National Revolution” to transform French society away from the republicanism that has brought them to this point. At the same time, you will want to rebuild the military and, of course, try to hold onto your colonial empire. In the moment of surrender, you are saddled with a massive 20% consumer goods penalty that represents the occupation costs levied on France by the Germans.

To reduce these costs, you can strike a number of deals with the Germans, starting with giving them basing rights (historically done to help German support for an uprising in Iraq), later you can reduce your penalties further by offering to produce aircraft parts for the Germans (reducing production cost for German planes) and sending workers to Germany (giving them a production bonus).

Of course, the Case Anton decision for Germany remains, so you might want to make very sure that you hold onto North Africa, lest Germany decides that you can’t be trusted.

That is all for today. Next week we will talk about some other changes coming in 1.8 Husky.
Click to expand...

What happens if you follwed enough in the monarchist branch?
How will Vichy and Free France will change?

Why do the trees have so much weird empty space?

This is looking so damn good, can't wait for Italy!

Can't wait to see how this turns out in game.


Archangel85 said:
Thankfully, we now have the ability to essentially run the civil war creation effect without actually creating a civil war. This does split the country, reassign the military, split the stockpiles, give both sides the right technologies and so on and so forth. This makes the whole process a lot less painful and reduces the number of edge cases, because as far as the game is concerned, Free France and Vichy France both qualify as France under the right conditions.
Click to expand...

Will this feature also be made available for modding?

pvt.conners said:
Can't wait to see how this turns out in game.

Will this feature also be made available for modding?
Click to expand...

Will Free and Vichy France get different generals?

rus-chel said:
What happens if you follwed enough in the monarchist branch?
How will Vichy and Free France will change?
Click to expand...

The event to set up vichy requires France to be in a faction with Britain and at war with England, which should usually only happen if both are democratic.

Will the non-aligned version of Vichy France, that is created in case of France surrendering to non-aligned Germany, also use the Vichy focus tree?
N

But can wet have Vichy to not be a scripted event, and gives us more flexibility in forming such thing in other countries and as a different nation, not just Germany?
L

Will you be able to return to the normal French tree afterwards?

brantodb01 said:
Why do the trees have so much weird empty space?
Click to expand...

Indeed. This looks pretty unappealing.
Toggle signature
Hoi4 Tech Lead on fixing AI scrapping Naval Construction:
"releasing a hotfix for one bug is really not cost-effective so we mostly reserve it for critical issues"

All in all it seems like a cool feature, but I am not sure how this works out in a regular historical multiplayer round.

If France is a player and capitulates and Vichy France is created, they loose so much stuff, that often it isn't fun anymore to play them.
So I often see, that Vichy France is banned, so France still has Africa and it's Navy.
For this point I also have a question, is there a way for Free France to get back it's full Navy?

Especially because of the Italian fight against Egypt. If the Western Front in Africa is safe, it is much easier for Italy to take Egypt, Suez and the Rest of Africa.

What I would love, would be some gamerules to tweak how Vichy France is handled.
How much land is transfered, if the Navy is split or all goes to Free France and similar stuff.

Will GER get some incentive to accept the surrender option to form Vichy France? Perhaps resistance strength gets boosted across the board if they take the other option?

Looking very good. Although some people are complaining about the tree sizes, they are not supposed to be big. It's supposed to be a sort of interregnum before returning to the normal French tree.

It's very nice to see you guys putting some emphasis on more plausible alt-history stuff here. @Archangel85 I do have one question though: if we join the Allies as Vichy France, will we still have Petain, or will we get Darlan?

I'm not sure if you were joking about de Gaulle having a 'winning personality' and great people skills. In real life he was actually known for being incredibly standoffish, unfriendly, and basically having rather poor social skills. De Gaulle had to fight extremely hard for recognition, and got it because of his inveterate opposition to the Nazis and his unbending refusal to compromise France's national interests.
Reactions:

Archangel85 said:
The event to set up vichy requires France to be in a faction with Britain and at war with England, which should usually only happen if both are democratic.
Click to expand...

Iskulya said:
Looking very good. Although some people are complaining about the tree sizes, they are not supposed to be big. It's supposed to be a sort of interregnum before returning to the normal French tree.
Click to expand...