Jump to latest Follow Reply
Menu
Install the app
You are using an out of date browser. It may not display this or other websites correctly.
You should upgrade or use an alternative browser.
Hearts of Iron IV 41423 Bug Reports 12392 After Action Reports (AAR)
Previous dev diary Next dev diary
Show only dev responses

Hello, and welcome back to another Dev Diary covering China. Today, we are taking a look at Mao Zedong, and the country recently renamed to “Communist China”. As a little treat, we will also show you how crazy you can really get with the new decision system (spoiler alert: pretty crazy).

Given the overall situation in China in 1936, the Communists certainly weren’t anyone’s favourite to win the Civil War. Mao and the Red Army had barely escaped encirclement and destruction in Jiangxi, being forced on the famous Long March that carried them to Shanxi to a new Base Area. There, they tried to recover their strength and prepare for the next showdown with the forces of Chiang Kai-Shek. Japan loomed in the background, and the basic question was simple: Who would strike first?

This question formed the core of the strategic deliberations the Party found itself in. If Japan struck first, then an alliance with the Nationalists would be necessary to present a United Front to the enemy. If Japan remained passive, then the efforts should be directed against the Nationalists. And while Mao had emerged as supreme in the internal factional struggles during the Long March, he was far from safe. Others may well try to usurp his position, advocating different paths to achieve true communism.

When war actually came, it came from the Japanese. Mere months earlier, one of Chiang’s top generals had taken matters into his own hand and forced Chiang (more or less at gunpoint) to sign an alliance with the Communists (this Xi’an incident is represented in game as a decision the warlords can take - which we thought worked better from a gameplay perspective than a random event that fired at some point). Finally together in a United Front, both sides lost no time in undermining the spirit of the treaty while staying true to the letter. By 1940, the United Front had become more or less a formality.

Looking at the focus tree, you will note that the Communists share the right hand side of their tree with the Nationalists (modders will be pleased to hear that we now have something called a “shared focus” in script, which does about what you’d think it does). Since the the opening missions to the various countries depend on either having the same ideology or very good relations, the Communists start in a somewhat weaker negotiating position than the Nationalists. But changes in the global situation might give you new opportunities - for example if, say, Japan were to fall to communism…

On the left side, the tree deals with the various internal factions in the Communist Party, from Mao and his allies to the Soviet-trained and backed faction under Wang Ming to an attempt at less radical “Social Democracy” under Zhang Lan. In the center, you are presented with the mirror of the choice facing the Nationalists - do you focus on the Japanese threat, or do you try to take the fight to the other Chinese factions and try to gain supremacy before Japan comes knocking?

Representing the Chinese Communists contribution to the war presented us with a bit of a problem - they didn’t engage in open warfare for the most part, and our systems are not really made to represent offensive guerilla warfare. We wanted to give the Communists a real shot at winning the Civil War without having to resort to the clumsy and counter-intuitive system used in vanilla, where you boost party popularity in China to flip states to your side.

So a few late-evening “design meetings” (beer may or may not have been involved) later, we came up with the Infiltration/Uprising system, which is a unique mechanic for the Communists. At the most basic level, it was supposed to let you pay infantry equipment to infiltrate a state. By itself, this does very little - but when you trigger the Uprising, the states you have infiltrated will flip to your side. Depending on your approach, this can cripple the other side’s war economy and strand a large part of their army in enemy territory. 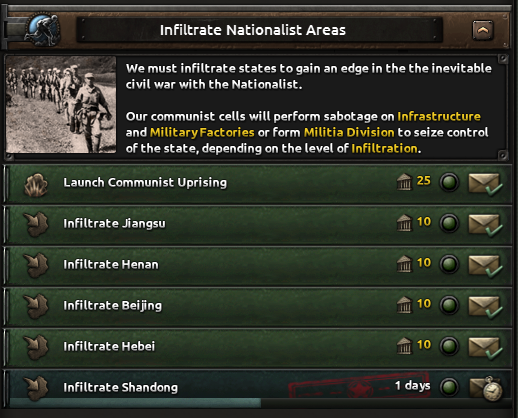 While we did want this to represent the ways the Communists executed their strategy of People’s War, building base areas from which to wage guerilla warfare, we also didn’t want to leave the other side without any way to counter the infiltration. So the infiltrated player can spend resources to try and uncover your infiltration, and, if discovered, to counter it.

We then expanded the system a bit further to make infiltrating a state not just a binary infiltrated/cleared state, but actually allow you to build up a Base Area in several levels. On the most basic level, your soldiers merely sabotage infrastructure and factories when you trigger the uprising. On the higher levels, the state flips to your control and on the highest level even spawns militia units to defend it.

We then adapted this system to also work against the Japanese. Countering infiltration does not remove it instantly, but only reduces the level of infiltration. It is always worthwhile, but it may not be enough.

Note that this system is still in testing and might change before release.

But opposition and warfare is not the only way you can win the Civil War. We really wanted to explore how the Communists could have secured their influence through political means, which brings us to the second unique China mechanic: Political Support. 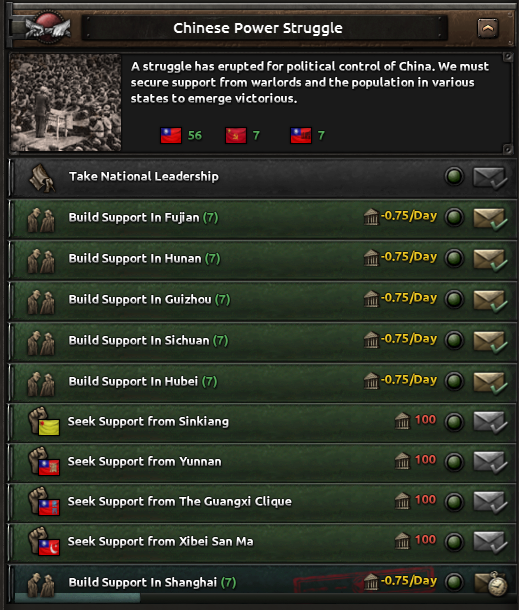 When the Communists decide to go down the “Social Democracy” branch of their focus tree, they will eventually form a coalition government with the Nationalists, which will begin a power struggle between the two parties. You can then spend political power over a number of days to build your power base in different states. Each state represents a support value, and securing the support of other warlords adds even more support. Once you have more support than the Nationalists, you can make a push for taking over the entire country, eventually annexing all of China after Chiang Kai-Shek suffers an...accident.

The Nationalist player, of course, has ways to counter this, but with political power scarce, eventually something will have to give. Note that you can pursue both approaches at the same time to keep the Nationalists guessing.

More details on how we did this will have to wait until a future diary, in which we talk more about the scripting behind the new features.

That’s all for this week. Next week we will talk about Generals, and why we have been looking at their family tree. For now, have a look at the awesome hats the Heroes of the Revolution wear into battle: 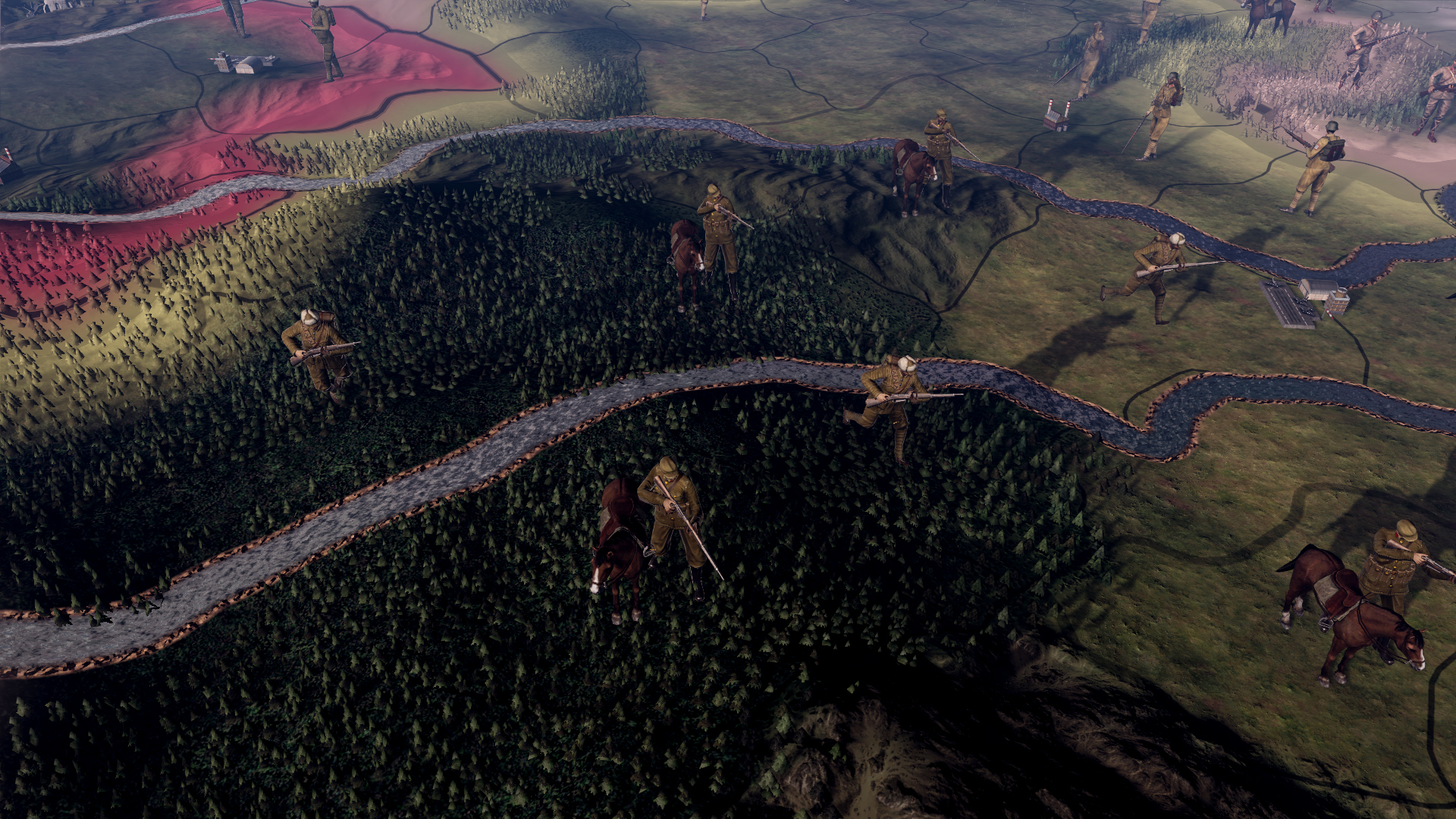 Edit: We forgot to showcase some of the other new portaits for PRC, here ya go:

At 16:00 today, @Da9L and @podcat will show off the reworked German focus tree, attempt to kill Hitler and bring back the Kaiser! So check out the Paradox twitch today at 16:00 CET: https://go.twitch.tv/paradoxinteractive
Last edited by a moderator: Nov 22, 2017

Alright, there are too many templars!
Welcome to Hearts of Creed: Waking the Assassins!

AND ALL HAIL TO THE SEXY CHAIRMAN!
Toggle signature
It is too easy to love a nestful of cats but too hard to raise all of them.

So Mao supports Capitalism and Dengism? *points to Socialism with Chinese Characteristics" couldn't another term be used instead of one that is all about bringing capitalism to china?
Toggle signature
My AARs
Vyshan's Inkwell listing of his AARs
Dharmachakra - An Indian and Dharmic Religion Improvement mod
Retired HOI4 Kaiserreich Dev

This looks very interesting, may actually have to play China now.
Toggle signature
"If everybody is thinking alike, then somebody isn't thinking."
"Lead me, follow me, or get out of my way. "
"May God have mercy upon my enemies, because I won't."

Hmm... i might have to do SocDem China simply for the super-sweet caps.

Regardless, the ability to kick out Mao is tempting.

I see a scrollbar on that continuous focus...

Really nice changes to the civil war! I will have to try out both chinas, maybe even a warlord when the dlc/patch releases.

Long March that carried them to Shanxi
Click to expand...

It should be Shaanxi.

please remind yourselves the difference between shanxi and shaanxi

It's completely scripted, so not only is it moddable, it is adaptable to other situations as well. Told you you can get pretty damn crazy with decisions (and some secret sauce that will be revealed later)
C

A DD with only info about the ChiComs? And next week Generals? Nothing on Japan or a revamped naval system?

Disappointed.
Toggle signature
"The only thing necessary for the triumph of Evil is that good men do nothing"
Edmund Burke

Dear @Archangel85 , as a loyal player wishing the game to be more historically accurate, I would like to offer some suggestions and hope you guys will take them into consideration. Most of them can be modified by changing text descriptions and won't demand big game changing, but bring a lot of immersion and accuracy at the same time.
OK, serious stuffs are finished, let's talk about something not so serious:
If I find anything new I will make another post ASAP, and my knowledge is fully at your disposal.
Last edited: Nov 22, 2017
Toggle signature
It is too easy to love a nestful of cats but too hard to raise all of them.

lilunxm12 said:
It should be Shaanxi.
Click to expand...

This looks like it'll make china an even more popular choice, I know I'm certainly going to try.
Toggle signature
Will HOI4 be released on H hour CET of D Day? - Mannstien
Once again though, there are no actual zombies, it is all hysteria and panic. - Darkrenown
No, cats were invented in 1902 by Satan, but we included them for gameplay reasons. - Darkrenown

Wow, such use of decisions could theoretically create a partisan system for governments in exile.

Archangel85 said:
My first act as president of the world is passing the "Unique and Distinguishable Province Name Act"
Click to expand...