Jump to latest Follow Reply
Menu
Install the app
You are using an out of date browser. It may not display this or other websites correctly.
You should upgrade or use an alternative browser.
Hearts of Iron IV 42610 Bug Reports 13381 After Action Reports (AAR)
Previous dev diary Next dev diary
Show only dev responses

Hello from the frozen wasteland wrapped in eternal darkness that is Sweden in December!


In the base game, the Chinese Warlords lead a rather silly existence. They exist at game start, work was clearly done to make them playable (at least as playable as any country with a generic focus tree), and when the war with Japan starts and things could get interesting - they are swallowed up by Nationalist China.


That means there is little use for the Nationalist player to really interact with them, since they are going to be absorbed anyway when the war starts. This made the Nationalists' situation quite a bit easier than it was historically. So in order to really represent the problems the Nationalists faced, we had to make the Warlords a bit more dynamic - and while doing that, we also made them a bit more interesting to play.

We still knew that the Warlords tree would be a bit of a sideshow, so we decided that all 5 warlords (Shanxi, Xibei San Ma, Sinkiang, Yunnan, Guanxi Clique) would get the same focus tree, and that it would be somewhat smaller than what we would do for a normal country (instead of a splinter region).

However, we also wanted the player to be able to make a difference and not be stuck with the rather small and restricted warlords focus tree forever. The core idea behind the focus tree is therefore to give the warlords a way to win the struggle for supremacy in China, take over national leadership, and ultimately gain access to the full Nationalist or Communist Focus Trees. This turns them into more fully-fledged contenders in the Chinese Civil War. 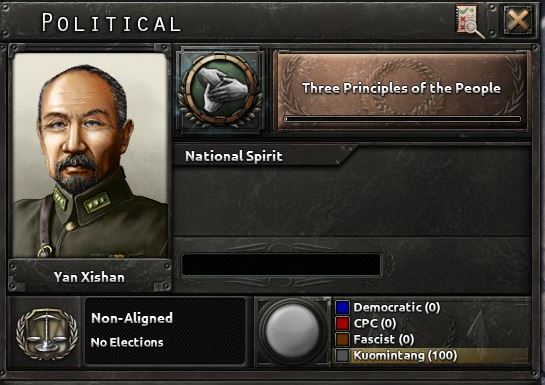 To do this, you have three basic options: you cooperate with the Nationalists, side with the Communists, or you strike out on your own (with an option to approach Japan later).

If you decide to ally with the Nationalists (as most warlords are scripted to do in historical mode), you get to build up your realm a little and fix some of the problems in the administration. Once your powerbase is secure, you can decide to join the political struggle and make a play for the leadership of China in the political sphere. 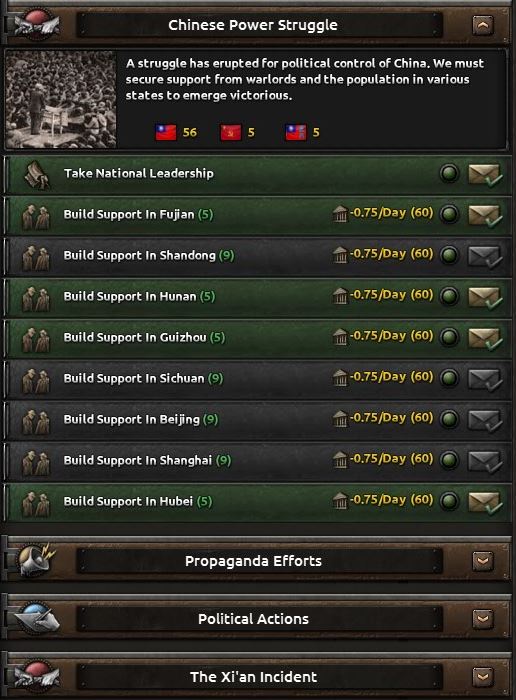 This uses the same mechanics we have outlined in the Dev Diary about Communist China, and if a political power struggle between Nationalists and Communists is already ongoing, a warlord will simply join into the struggle. If you win the struggle, and claim national leadership, your focus tree will then switch to the Nationalist Chinese focus tree. 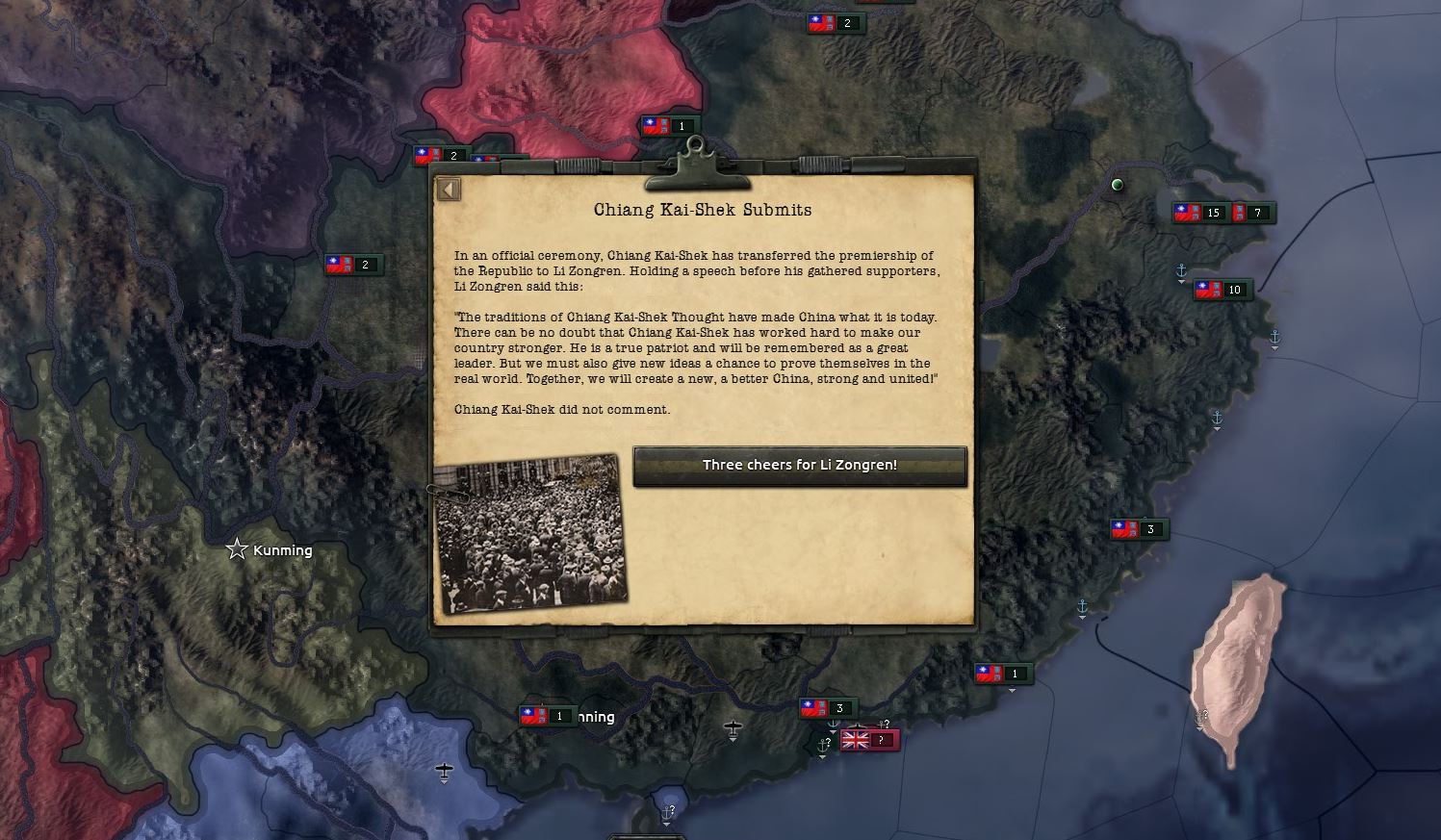 Siding with the Communists starts out very similar, but the end game is different: instead of joining the political struggle directly, you appeal to the bigger Communist: Stalin. Getting the support of the Soviet Union won’t come cheap, though, and there is no guarantee that whoever leads the Communist party of China is willing to just accept you taking over. Should you succeed, you will be able to annex Communist China, giving you their troops as well as their focus tree. But beware: Stalin will come to collect his due. 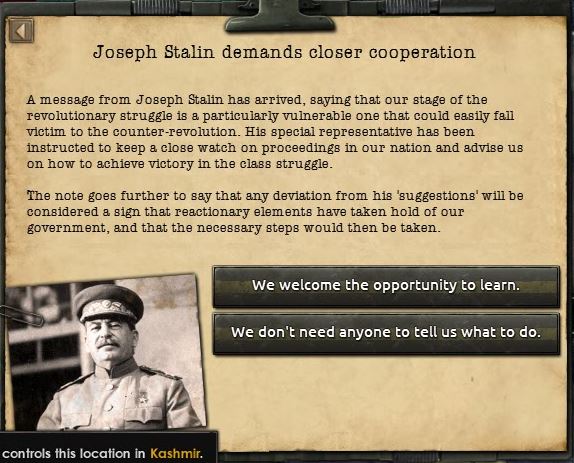 Lastly, the option to strike out on your own is clearly the most difficult of all, making an enemy out of both sides - but it offers you the chance to claim China as your own, without having to make compromises. While you can try to make a deal with the Japanese, there is no guarantee that they will accept, and in any event you would only be trading one overlord for another. This approach also blocks off any chance of joining the political struggle inside China, meaning that you will have to fight for it.


However, since facing the nationalist armies in the field may be a bit too much despite all their many weaknesses, we have decided to expand on Border Wars a bit, giving independent-minded warlords a way to expand some territory while keeping the risk manageable.


Border conflicts start with someone staging an incident between two states (yes... they have to border each other). This costs some PP and fires an event notifying them that they need to position troops or risk losing control of the state. 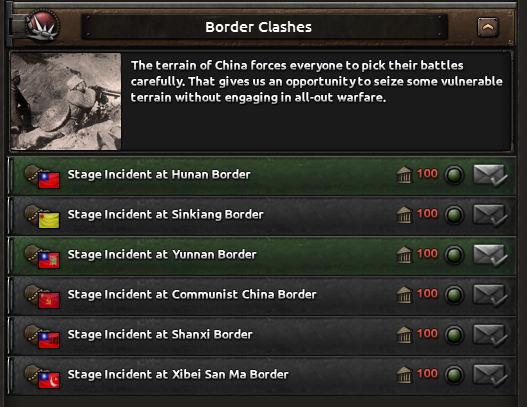 After a bit of time has passed, whoever staged the incident gets a decision to escalate the situation further. If this decision is left alone for too long the incident is forgotten and nothing more happens. 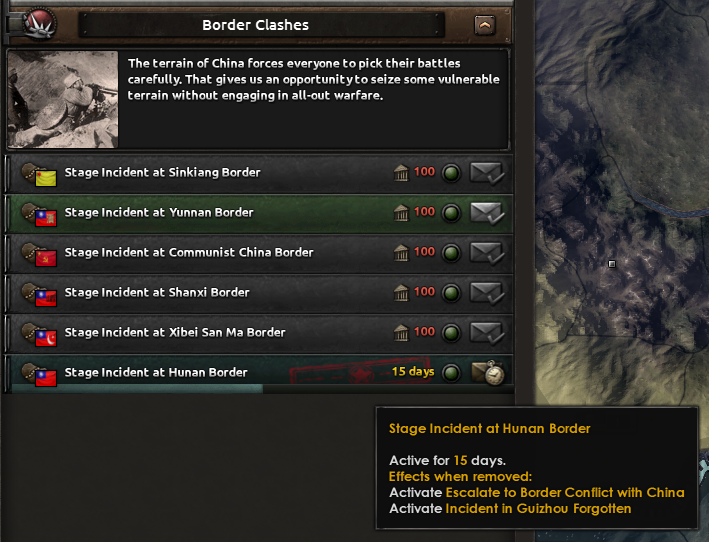 To escalate the incident to a border conflict the instigator needs to place troops on the border and select the decision. Divisions from the two states start fighting in a limited form of combat with special rules such as terrain giving less bonus, lower combat width and so on. The country that first initiated the incident is considered the attacker.

The fighting will continue for a good amount of time, and if no one has emerged victorious by the time it runs out the conflict is considered to be a stalemate. This awards both sides with a bit of army experience and the defender with some PP for having successfully defended the territory. This is sort of a soft loss for the attacker, but does not come at a major cost other than the PP wasted on initiating the entire incident.


If the attacker wins the conflict, they seize control of the state and are awarded PP for their success. If the defender wins they gain a lot of PP, army experience and research bonus to land doctrine. All of the outcome effects are scriptable and there is a good chance we will add, tweak, or change them after more play testing. 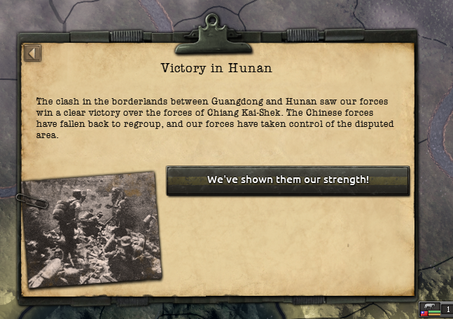 Both attacker and defender can choose to escalate the conflict further at the cost of addition PP. Doing so gives a combat bonus, allow more troops to join the fighting and pushes the conflict to the brink of all out war. Both sides can back down at this point, but this results in losing the border conflict. It might however be worth taking a loss over an all-out war you cannot hope to win.

If any of the sides chooses to escalate the conflict further, the other side will be notified and not long after, war breaks out.

Next week is going to be a Christmas special with some cool stuff for modders.

Due to an important company-wide conference that is not in any way connected to the release of a new movie from a well-known sci-fi franchise, the stream will be at 14:00 CET today. Tune in at https://www.twitch.tv/paradoxinteractive and watch the Kaiser restore order in Germany!
Last edited by a moderator: Dec 13, 2017

Determinism in EU4 and prior games

Ruler of Somewhere else

Wait so what happens if a opposition Minded Warlord takes over all of China. Do they pick up a Nationalist China Focus tree or do they not get a focus tree of their own or their is their another unique focus tree for such states?

Will the Soviet-Japanese border clashes in Mongolia be reworked as well?
And will Hungary get the chance to get in some border action against Slovakia?
Toggle signature
My mods:
Death or Dishonor: Generals -- Version XII, May 6th 2020

The added colors and graphics look great on the focus tree
Toggle signature
I have an affection for a great city. I feel safe in the neighbourhood of man, and enjoy the sweet security of the streets.
(Henry Wadsworth Longfellow)
In Rome you long for the country; in the country – oh inconstant! – you praise the distant city to the stars.
(Horace)
Almost two thousand years apart, two revered poets comment, with reference to timeless qualities of city life.

No units render ?
Toggle signature
GENERATION 40: The first time you see this, copy it into your sig on any forum and add 1 to the generation. Social experiment.

Yay, we finally get a working border conflict mechanic! Will the existing border clashes (for example between Japan and the Soviets) be replaced by this mechanic triggering instead?

--Yigito123-- said:
Yay, we finally get a working border conflict mechanic! Will the existing border clashes (for example between Japan and the Soviets) be replaced by this mechanic triggering instead?
Click to expand...

That is the idea.

Border Incidents are for Nat China only?

This looks like an excellent mechanic that will open up a lot of options for modders. It's good to see Paradox modelling the smaller conflicts or 'incidents' in a much more dynamic and fun way than just taking a national focus or decision. I'm really looking forward to this expansion - a definite day 1 buy for me.

Are the border conflict mechanics in the patch or the DLC?
Toggle signature
"It is well known that nothing is such thirsty work as the acquisition of knowledge."

Archangel85 said:
Next week, we will answer the critical question of what exactly the airspeed velocity of an unladen tiger is.
Click to expand...

The Flying Tigers?
Toggle signature
"War does not determine who is right. Only who is left." - Bertrand Russell

Archangel85 said:
Next week, we will answer the critical question of what exactly the airspeed velocity of an unladen tiger is.
Click to expand...

A European tiger or an African tiger?
Toggle signature
"Mankind has only one science. It is the science of discontent." -- Count Hasimir Fenring
'What we were, what we became' - Too tempted, had to write a Stellaris Roleplay AAR... ^^ (completed)
'The Führer Goes Nuts! (again)' - I did say I was too tempted.​

Sweet! But still a red zone too large.

EDIT: Just take a second thought, how could Xi'an Incident happen, if Xi'an was literally controlled by communists, in the game that the whole province is in the color of red?
Toggle signature
It is too easy to love a nestful of cats but too hard to raise all of them.

Will a Warlord striking out on their own not get a new Focus tree?

The Winter War was only 7% of Finland's WW2

Big Dead One said:
The Flying Tigers?
Click to expand...

I thought it meant revealing the release date. But maybe not.
Toggle signature
85% of the Soviet armoured vehicle park on 1.1.1936 is missing from HoI4