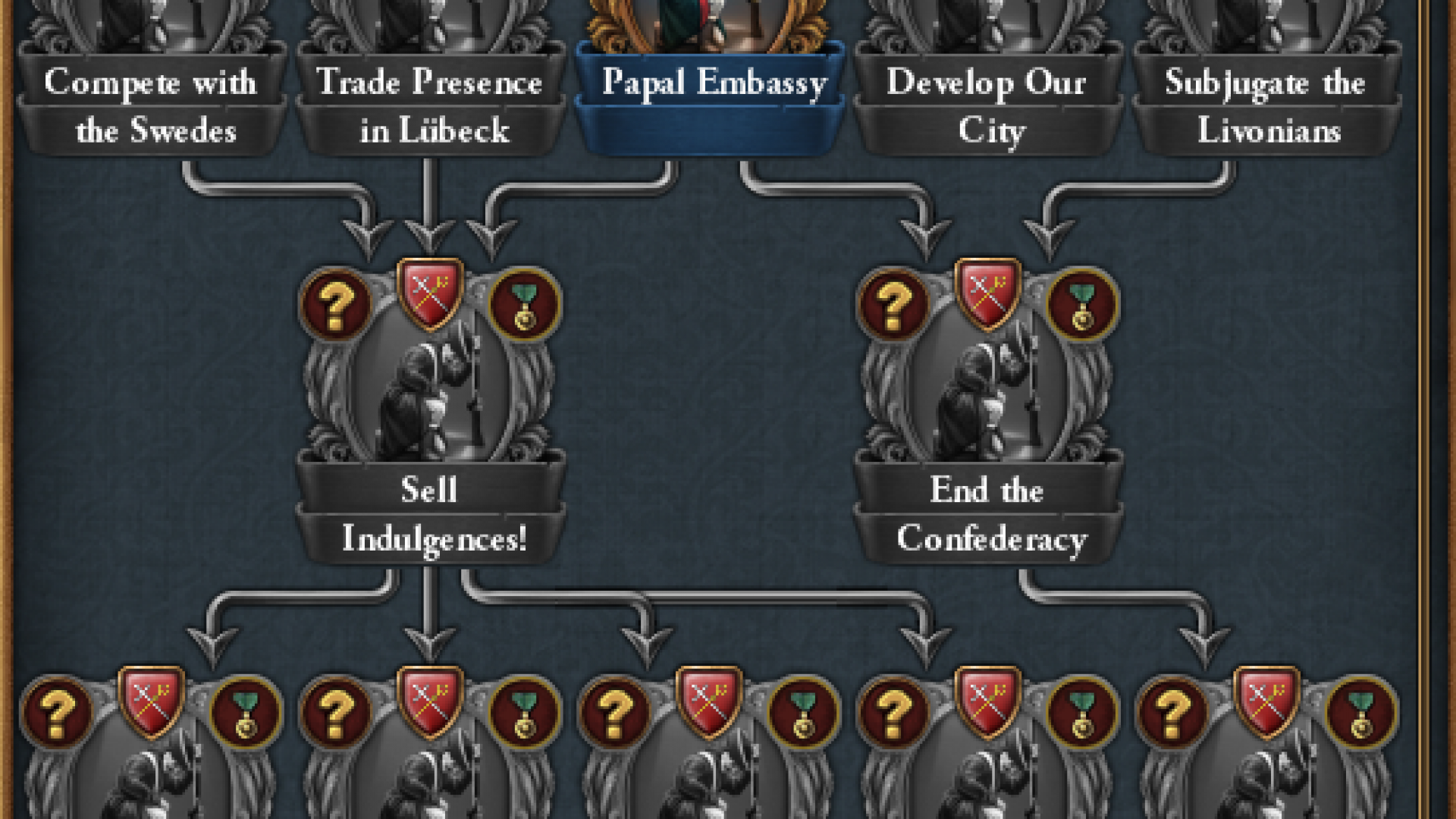 Hello there and welcome to our next Development Diary for Europa Universalis IV! For this week we will take a dive into the mission tree for Riga and into the additions to the game from the free update. So let’s get started!

Located at a commercially advantageous position, Riga enjoyed great wealth and affluence between the 13th and 15th century, during which she served as part of the well-known Hanseatic League. Despite its size, the city survived for many centuries, eventually becoming a manufacturing and mercantile center of whichever power had influence in their surrounding territory.

As for its mission tree we try to answer one question: is it possible to make playing (and staying as) an OPM enjoyable? The Rigan mission tree is relatively small, but it will lead your OPM of Riga into an unique direction of gameplay.
The mission tree is split into three branches, focusing each on different tasks for your nation to do. Starting with the smallest of the three, the “City against the State” and “Develop Our City” missions focus on establishing authority of the Archbishop over the city of Riga as historically the city itself was very autonomous of its ruler.
What makes these missions special is that their rewards are the nature of the modifiers granted by them. Unlike usual permanent modifiers, your capital receives these triggered modifiers:
The most right branch of the mission tree is made of the military missions. Although the intended playstyle is staying as small as possible, it is apparent that a beautiful city such as Riga needs a buffer state to keep it protected from Novgorod and the jaws of Commonwealth. Because of this the mission “Raise Riga’s Defense” will give you a subjugation casus belli against the Livonian Order. You will also gain +10% Morale for a limited amount of time, but that is all you get, so good luck in your first war.

*Cannot sell Indulgences to countries which are at war with you or are subjects. You need at least 75 Papal Influence. You cannot sell an Indulgence to the Pope himself.

Note: AI acceptance of the Indulgences is dependent on their current treasury, if they are in deficit and if they even need the extra stability. Countries with +1 stability for example have -50 reasons to accept it while countries with negative stability gain +50 reasons for every missing stability.​
Of course selling Indulgences is not without its consequences. Every time you sell one to a Catholic country you will increase the Reform Desire by 0.25%. Eventually, you could run out of customers this way as the Reformation will convert them to Protestantism.

If you happen to join the reformation (and repent for you sins of selling Indulgences) you will get the following event:

Note: The name of this government reform is a placeholder, and we appreciate suggestions for a better sounding name.​
While the Catholic Plutocracy focuses on earning money through the selling of Indulgences, the Theocratic Plutocracy is more concerned with spreading the Reformation. As such, the trade policy “Propagate Religion” will be available to you to convert Catholic provinces to your state religion - as long as you are either Hussite, Protestant, Reformed or Anglican.
Additionally, you get access to the following peace option:
This is the first experiment of a peace option which forces the losing country to destroy a building in one of their provinces. In this case it is the tax building, and it selects the province in this order: capital, then highest developed non-oversea province, then highest developed province.

Coming back to Riga’s mission tree, the mission “Sell Indulgences!” requires you to either sell Indulgences 5 times, or raid 5 heretic churches in total. From there your mission tree branches into four smaller paths of which have the following highlights:

Speaking of Hansa: we have some good news for every Merchant Republic enjoyer here!
With the free update, Merchant Republics gain full access to both their factions and estates. Although there were arguments that they should have one or another, we think it is a fair change if the merchant republic has access to both systems. Factions are very outdated and would require too much work for 1.34 to be reworked, which is why we have made this decision.

We also added a new government reform for Novgorod when they form Russia:
While we are at the topic of government reforms: Dharma overhauled the system of government reforms for EU4, and has allowed players to customize their experience as they progress through their campaign. While we really like the concept, the amount of choices always felt a little bit lackluster.
Because of that we have decided to add new government reforms beyond the Tier 1 level, and rebalance existing non-Tier 1 reforms so you have more agency while picking your government reforms. Here is a peak into the more interesting reforms we are going to add for the Republics:
The general design idea is that government reforms should not necessarily be just a source for more modifiers to stack for you (though they will never really leave us either) but as changes and additions of mechanics of your country.
For example: the mechanic “Can force Re-election” allows you to use one simple decision at the cost of 5 Republican Tradition every 20 years to trigger the “Election!” event. Despite the fact that it is just one simple decision attached to a government reform, it can have a significant impact on your Monarch Power generation.

With the addition of these new reforms we aim to have around 4 or 5 government reforms to choose from per tier above the first one.

With the help of our newest colleague we also have started to add new reforms for the monarchies. Here you can see two new reforms:
Of course we are also reworking some of the older reforms too:
That was it for today! Next week's DD will be written by @Gnivom , and we won't be presenting any new content. Instead, we will be addressing the changes in the combat system introduced in the 1.33 update, and how we're polishing them further for 1.34 update (so that will be part of the upcoming free content, of course).

Until then I wish you all a nice week!
Last edited by a moderator: May 20, 2022
Reactions:

I was desperately waiting for this! <3
Toggle signature

the idea of selling indulgences to other states seems very silly and plays into the continuing misunderstanding of Catholicism by EU4 devs imo
Toggle signature
signatures are stupid and antiquated
Reactions:

Awesome that Novgorod > Russia now means remaining a Republic! Will there be other changes to Novgorod coming up?

As well the text at the very end seems to be a left-over from the text from last-week? Perhaps it could be updated to reflect what is expected for next week's DD?
Reactions:
M

"That was it for today! Next week we will take a look at the content of our favorite OPM, Riga, along with some extra government reforms we’re planning to add to the base game."

Didn't you say that in the last dev diary or is there a part 2?

Other than that, I can see Centralised Bureaucracy becoming the next "Strengthen Noble Privileges" meta
Reactions:

Great changes, but I would like to ask something about the government reforms. Would it be possible to allow each tier to have more than 2 rows of government reforms? Currently, the interface can't handle more than 2 rows (8 reforms). Having more than 8 reforms causes the game to crash when opening the window. It would be amazing if it automatically expanded when exceeding 8 reforms, just like it automatically adds the second row when you have more than 4. Thank you!
Toggle signature
Lead Developer - Ante Bellum
• Steam • Wiki • Discord •​
Reactions:

MachopPower69 said:
"That was it for today! Next week we will take a look at the content of our favorite OPM, Riga, along with some extra government reforms we’re planning to add to the base game."

Didn't you say that in the last dev diary or is there a part 2?
Click to expand...

Thanks for pointing it out! Fixed!
Toggle signature
EU4 Content Designer and Mod Enthusiast
Reactions:

We also added a new government reform for Novgorod when they form Russia:
Click to expand...

Yes! Finally a reason to form Russia as Novgorod!

you are allowed to sell Indulgences to other Catholic countries
Click to expand...

Could this ability be given to the Papal States as well considering they are Pope?

Overall this looks really good! Can't wait to see what we have for next week.

Ogele said:
Thanks for pointing it out! Fixed!
Click to expand...

I wonder what next week would be for. Will we begin with the Scandinavian brothers or are we still on the Germany side?
Reactions:

That was it for today! Next week we will take a look at the content of our favorite OPM, Riga, along with some extra government reforms we’re planning to add to the base game.
Click to expand...

Seems good, one thing I've realized from playing around with mods every now and then is that the government reform side of the base EU4 is underutilized. I hope the trend of adding new gov. reforms (either mechanically impactful or incremental modifier) continues. Also, how exactly will the propagate religion work for Riga? Only target Catholics, other non-reformist heretics, all Christians, pagans too, all heathens ...?
Reactions:

Ogele said:
“Raise Riga’s Defense” will give you a subjugation casus belli against the Livonian Order
Click to expand...


Ogele said:
With the mission “Contact the Emperor” you can join the HRE through the following event:
Click to expand...

“Contact the Emperor” mission looks like a root node. Is AI likely to join HRE via this mission?


Ogele said:
The mission “Handle the Reformation” reduces the trade power needed for Propagating Religion from 50% to 15%.
Click to expand...

Not a balance guy but it feels way too low IMO. AI is not likely to use it though.
Reactions:

Can we build our little Power-Vassal with help from the Missions for Riga, if I Play Sweden and vassalize the them for example?
Reactions:

There goes my planned run of Genoa postponed until the DLC is out... ugh. I'll go back to Imperator for a campaign then
Reactions:
L

I noticed one of the new reform cannot seize crownland. So how would you increase crownland then?
Reactions:

Will Grand Veche Republic also be avialable for Pskov, another Russian trade republic?
Toggle signature
https://forum.paradoxplaza.com/forum/index.php?threads/streltsy-disasters.1104950/ - my suggestion of unique disaster for Russia and nations with primary culture of East Slavic culture group

Limyx826 said:
I noticed one of the new reform cannot seize crownland. So how would you increase crownland then?
Click to expand...

You get 0.2 crownland each time from deving the provinces
Toggle signature
https://forum.paradoxplaza.com/forum/index.php?threads/streltsy-disasters.1104950/ - my suggestion of unique disaster for Russia and nations with primary culture of East Slavic culture group