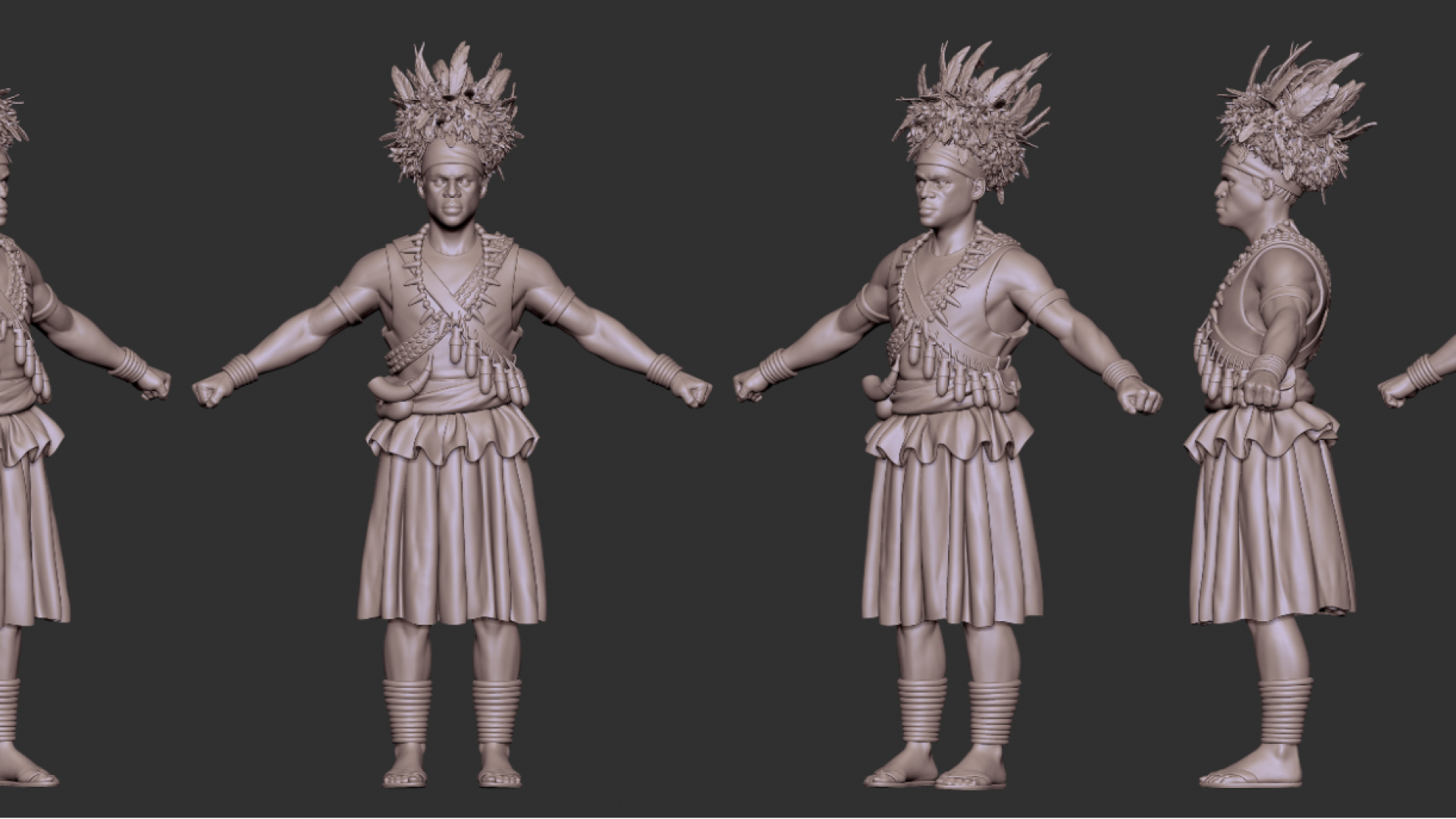 Welcome to this week’s dev diary. I’m David Horler, the Art Lead at Tinto, and I’m very excited to show you what the art team has been cooking up in recent months.

In the last year the art team at our Barcelona studio has exploded, rapidly expanding to the 9 talented artists that we have today—including every discipline from 3D character artist to UI developer. We have so much interesting stuff planned for the future, but for now I’ll introduce to you some of the work we’ve already done for Origins.

So what is the process for making art in one of our immersion packs? The first thing that happens is the brief, in this case @Johan asked us to prepare 16 unit models and 2 missionaries for sub-Saharan Africa, a hugely underrepresented area in terms of previous art DLCs.

We opened up the game to see which cultures are missing art, and while East and West Africa already had unit models, we noticed a large area of southern Africa that was not already covered by unit packs. 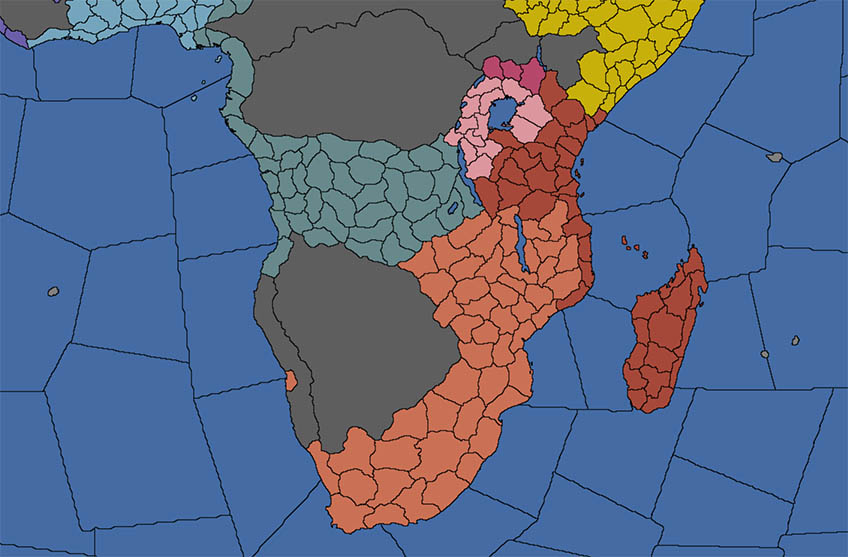 Our artists started doing research for interesting and unique types of clothing historically worn by people in this area. Historical authenticity is very important in this kind of game so we were careful with our references. However, we permitted ourselves a little bit more creativity in later tiers, to create “what-if?” unit models, rewarding players who pull off amazing feats of technological progress.

After the research, concept artist Irene and 2D artist Ruben set to work making concepts for these characters. The goal was to start with simple warriors, and then as the ages progress they become increasingly complex in their appearance—eventually evoking the disciplined regiments of Napoleonic Europe but with a distinctive African twist.

Since these units would be used across many different countries, we needed to figure out where the country colours would go at this stage as well; in this case red is primary, yellow is secondary, and blue is tertiary.


The first ideas are rarely the best, so the artists explore many iterations as we try to find the right shapes and colours, as you can see with our work on the Coptic missionary here:

Over the next few months we worked together with our friends at N-iX Game & VR Studio to turn these concepts into 3D models that are both functional and look great. To start with we make a very high resolution model in ZBrush with all the cloth folds and surface details that we want. This is made with a combination of digital clay sculpting and cloth simulation, both of which are essential processes in modelling characters for modern video games.

It looks beautiful, but with this many polygons it is impractical for realtime rendering, so the next step is to bake all those details into a normal map texture that is wrapped around a low-poly model.

Once baked, we start the texturing process. In EU4’s past, we have laboured over dozens of layers in Photoshop, but recently we have adapted our workflow to use Substance 3D Painter, which is an incredibly powerful tool much better suited to texturing models. 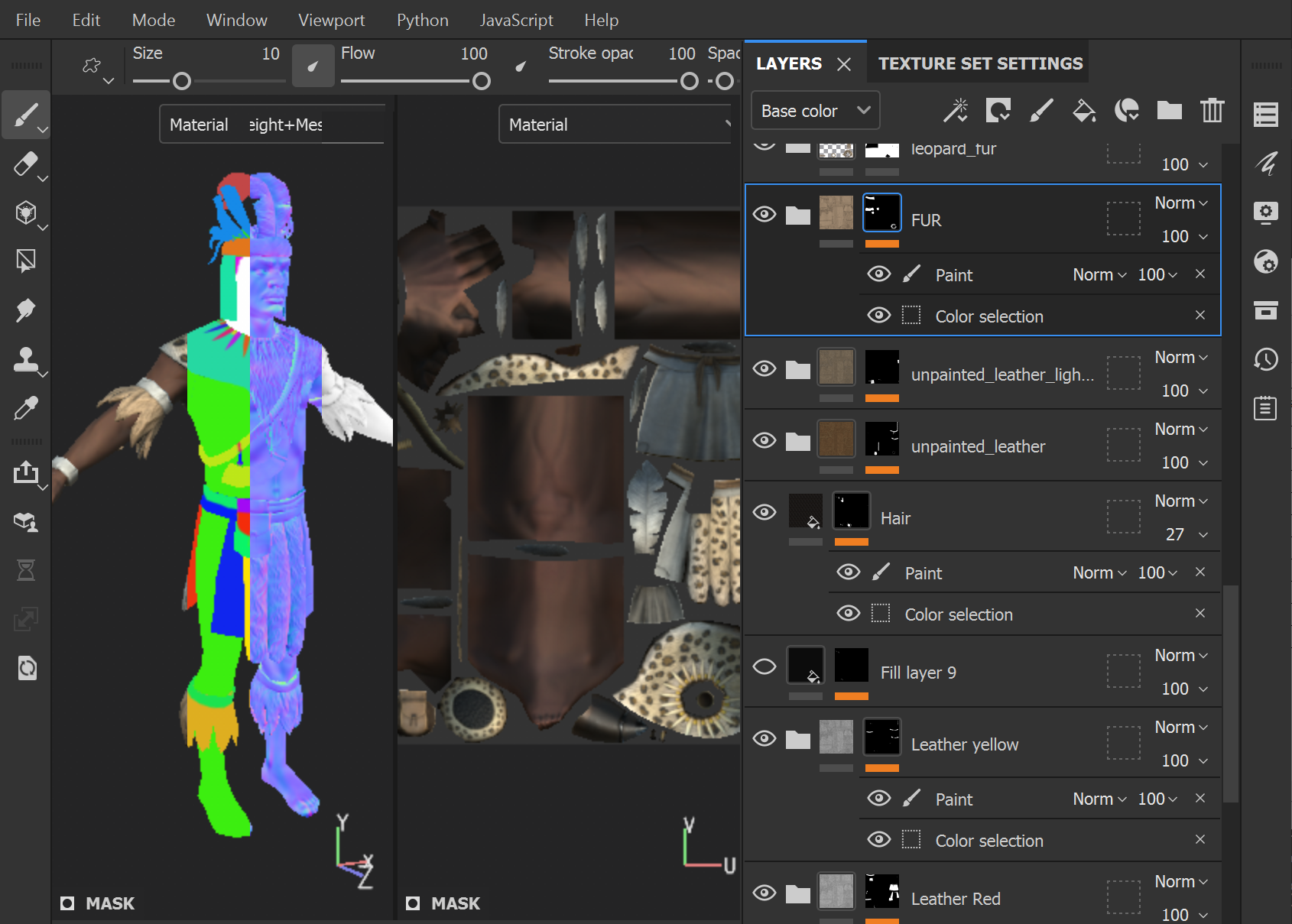 When the textures are finalised, the models are rigged to a skeleton and finally imported into the game. In the case of the missionaries, we got to make brand new animations as well. We then implement it, its testing is managed by our internal QA coordinator and carried out by external QA teams.

For some context of how long this sort of unit pack takes to make, the entire process began in early April and was finished in September. And here are the final products! Let us know what you think of them.


As well as new mission tree icons and the monuments that you saw in October, we have also been busying our 2D artists with more advisor portraits in forgotten parts of the world.

Since Leviathan released with so much flavour for Aboriginal Australians, Southeast Asians, and Polynesians, the advisor portraits for those cultures have been high on our art request list. So for Origins we have made a full set of male and female advisor portraits for each of those regions that will add even further to the immersion of playing there.

And of course, a release wouldn’t be complete without a new loading screen. We present Nzingha Mbande of Ndongo, a fascinating queen from Angola who resisted Portuguese colonisation. A shrewd diplomat and accomplished tactician, she is remembered as one of the great inspirational women in African history, and was previously featured in our free Women in History DLC.

The loading screen will of course be included in the 1.32 patch; we will drop more info on the free update very soon! 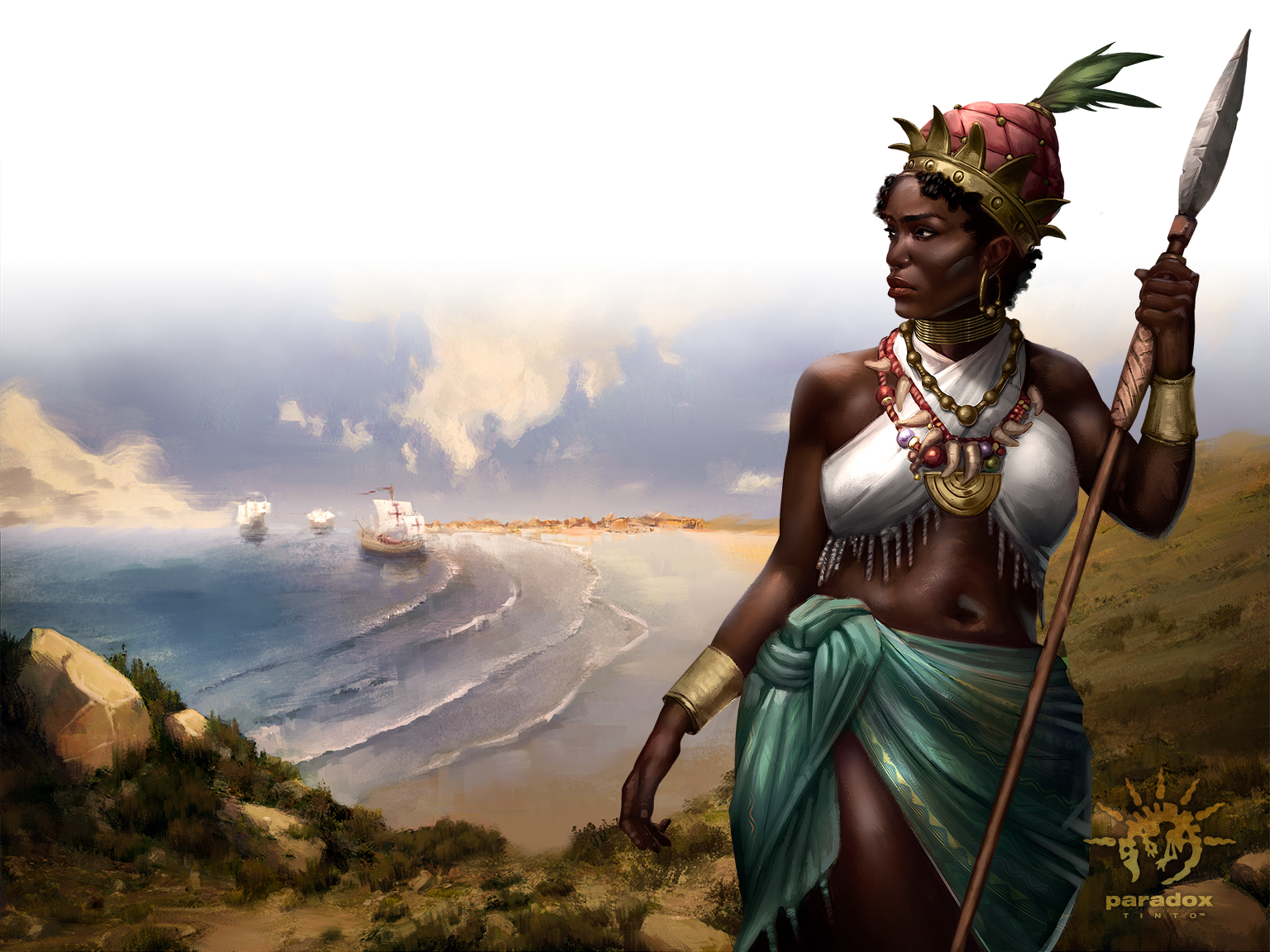 Come join us at the Paradox Stream, on Wednesday the 3rd and 10th of November at 5pm CET for the first showcase of Origins! Mordred and Bjorn will be joined by Content Designer Álvaro (@Pavía) for the stream, and will be able to answer any questions you may have.

I hope you enjoyed this dev diary, and I can’t wait to see what you think of Origins when it releases in just over a week’s time!
Last edited: Nov 2, 2021
Reactions:

Amazing choice for an amazing loading screen. Nzingha Mbande of Ndongo is definitely an amazing character in African History and I love how she engaged against the Portuguese!
Reactions:

not to be rude or anything, but wasn't this particular queen the same one who sold close to 20,000 people to dutch at the same time while fighting off Portuguese?
Reactions:

@SaintDaveUK
Very good job, the new models are beautiful.
I was not expecting to see new advisor portraits for Southeast Asia and Oceania, this was a nice surprise, I think the only region now without any advisor portraits are the four/five siberian tags (they use western europeans advisors).
Last edited: Nov 4, 2021
Reactions:

Casko said:
not to be rude or anything, but wasn't this particular queen the same one who sold close to 20,000 people to dutch at the same time while fighting off Portuguese?
Click to expand...

The Dutch probably awarded her with "Slave Trader of the Month"
Reactions:
I

Casko said:
not to be rude or anything, but wasn't this particular queen the same one who sold close to 20,000 people to dutch at the same time while fighting off Portuguese?
Click to expand...

Pretty much every ruler in Africa, especially on the coast, was a slaver
Reactions:
R

So, he mission tree of Mam is worse then any third world countries in afrcia, Paradox LOL

rasplay1 said:
So, he mission tree of Mam is worse then any third world countries in afrcia, Paradox LOL
Click to expand...

They'll get addressed in a Middle East DLC/Immersion pack sometime in the future.

rasplay1 said:
So, he mission tree of Mam is worse then any third world countries in afrcia, Paradox LOL
Click to expand...

So, I agree the Mamlukes deserve better then they have. But they also historically got eliminated well before most of these 'third world nations' (are we basing countries in game off of their modern conditions, and their affiliation with either NATO or the Communism during the 20th century?).
Toggle signature
Don’t be afraid of the dark. Be afraid of the terrible things that are hiding in there, and the terrible things they will do.
Reactions:
R

Darsara said:
So, I agree the Mamlukes deserve better then they have. But they also historically got eliminated well before most of these 'third world nations' (are we basing countries in game off of their modern conditions, and their affiliation with either NATO or the Communism during the 20th century?).
Click to expand...

They became Egypt, which you form. And these central african countries, were not much futher then natives of new zealend. Following your logic, which should have a mision the cores on the whole world
Reactions:

She was fighting the portugese over the CONTROL of the slave trade. She invaded neighbouring African kingdoms to which she had no claim on, forcing them to form a coalition against her. She was not a saint, not some heroic 'anti-colonialist icon, anti-slave trade Queen'. SHE GLADLY ALLIED THE OTHER COLONIALISTS IN THE AREA OPENING UP THE SLAVE TRADE TO THEM
A

Ixal said:
Paradox at least tried to be historically accurate.
Click to expand...

For me, the historical accuracy thing has blown away the moment they decided to:
1. Put Aceh, which historically started in 1496, to 1444.
2. Put Banjar, which was a Muslim kingdom that started in the 1520s, to 1444 as a Hindu tributary of Majapahit. Historically a Hindu polity called Negara Daha existed in its place during the starting date.
3. Have Mataram as one of the spawned tags (along with Demak) during the Majapahit disaster event. Historically the port city of Demak and the inland city of Daha (not to be confused with Negara Daha mentioned in point 2) vied with each other for dominance in Java. Mataram started in 1586, about 6 decades after the fall of Daha in the 1520s, more than a century after the fall of Majapahit if you consider the fall of Trowulan (Majapahit's capital) in 1478 to Daha's forces as the true fall of Majapahit.
Reactions:

rasplay1 said:
They became Egypt, which you form. And these central african countries, were not much futher then natives of new zealend. Following your logic, which should have a mision the cores on the whole world
Click to expand...

No, they were conquered by the Ottoman Empire until the 19th Century, when Muhammad Ali (who was not a Mamluke) became defacto independent; incidentally after he purged the Mamlukes. The Mamlukes exist briefly around 1770 when Ali Bey al-Kabir rebelled, and in game at that point control Hedjaz and have rebels in Egypt, but not the rest of the time.

@SaintDaveUK Just looking at the new 1.32 monuments artwork on a stream. They're absolutely awesome.
Reactions:

El_Cid_ said:
@SaintDaveUK Just looking at the new 1.32 monuments artwork on a stream. They're absolutely awesome.
Click to expand...

I fear some balance issues.. Just one example here: 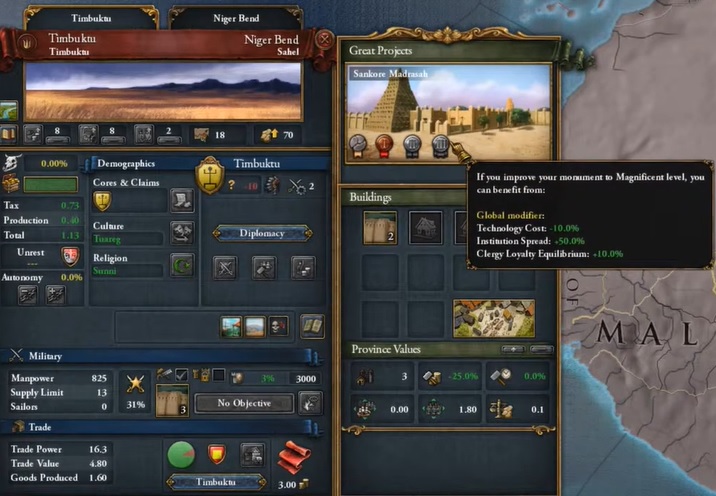 actually the balance here is not that bad. I mean its Tier 3, so you have to pay lots of money to level up. Its Timbuktu, way inland so it will be just reachable by the surrounding african nations for the first 100 Years at least or otherwise just by a smart and aggressive spain/portugal or north african player who has other things concerning his starting situation... Realistic the use for the institution and tech cost reduction will be in the most cases way back in the late game where there are not that many institutions or techs left. So its not giving a huge bonus for anyone, but a chance for otherwise chanceless african starting players.

In total there are 5 new monuments in africa which is the lowest addition (besides ociania... ) in an african immersion pack and a hugh continent. So I like it. As well as I feared before, that timbuktu will get nothing in this update, while the city of timbuktu was a big importance in the history and sagas at that time, so iam more than happy that they (and benin) get at least an unique monument.
Reactions:
Show hidden low quality content
You must log in or register to reply here.
Share:
Facebook Twitter Reddit Tumblr WhatsApp Share Link
Top Bottom