Good morning! As you may have heard, the Paradox office has shut down temporarily due to Coronavirus concerns; we’re all continuing to work from home though, and you’ll be pleased to hear that thus far the team remains in good health. If all goes as planned we should be able to continue releasing dev diaries as normal.

Today I’ll be covering the Papal and Italian mission trees. It’s been a while since we had a content-focused dev diary, and there’s still quite a lot we haven’t covered. Emperor and the 1.30 patch have such an immense wealth of content that we almost definitely won’t be able to talk about it all before release. With that in mind, here’s a list of mission trees we’ve created over the last year or so:

Improving Catholic and Papal gameplay has been one of our core priorities during the development of Emperor, so it’s only fitting that the Papal States get a suitably comprehensive mission tree to boot. I won’t attempt to describe the requirements and rewards for every mission, so I’ll just focus on the parts I think are especially interesting.

Starting from the Patrimony of St. Peter, the Holy Father is encouraged to embark on a campaign of conquest across the Italian peninsula. Besides uniting Italy under the rightful patrimony of the Pope being a noble goal in and of itself, this will also help you meet the requirements for the Kingdom of God decision.

Among the first missions the Papal States can pursue is Form the Swiss Guard. To achieve this the Pope must either have very good relations with Switzerland or else directly own a province in Switzerland itself.

The Swiss Guard is a unique mercenary company available only to the Papal States through the completion of this mission. They are very cheap to maintain, cheaper even than your normal Infantry regiments at base maintenance, and highly disciplined. They are however a very small Company, so while they will provide a significant edge in the early game they will not scale as well as other Companies later into your campaign.

Pursuing this branch of the mission tree will eventually get you to End the Schism. Besides completing previous missions in the branch, the owners of Constantinople and Moscow must both be Catholic. Completing this mission will give every remaining Orthodox country an important choice to make: 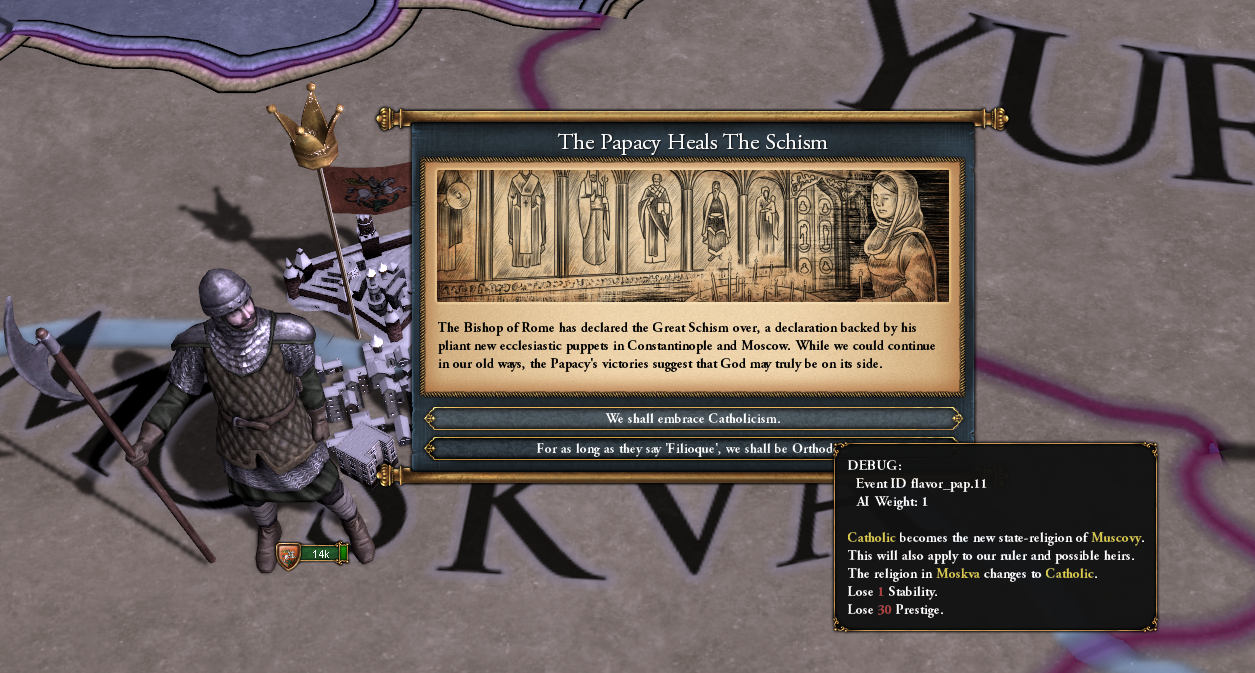 Several of the missions for the Papal States give bonuses not only to the Pope himself but also to other Catholics. The Holy League for instance gives mercenary bonuses to the Pope’s allies, while Eastern Catholicization gives Lithuania a bonus to their Missionaries. The most interesting application of this idea is in the Missions to China and Japan. Using whatever means the Pope deems necessary, several provinces in China/Japan must be owned by a Catholic country to complete these missions of evangelism. Upon completing the mission, not only will relevant countries receive events giving them an opportunity to embrace Catholicism, but all provinces in China owned by a Catholic but not yet Catholic themselves will become easier to convert, while provinces already converted will receive reduced development cost.

Moving on, here’s the mission tree for a united Italy:

As you can probably tell from some of the mission names, this mission tree has a somewhat Roman theme. Completing these missions will set you well on your way to restoring the Roman Empire and, therefore, Italy’s rightful place in the world.

The leftmost branch of the tree deals with bringing prosperity and advancement to Italy itself. Completing the Prosperity for all mission grants a temporary development cost modifier which will be useful in completing the Develop the South mission, which requires at least 5 provinces in southern Italy to have at least 25 development.

The main part of the mission tree encourages you to embark on a widespread campaign of conquest across the Mediterranean. A new Caesar must launch a new invasion of Gaul by crossing the Alps and defeating whatever barbarians have made it their home in the absence of proper Roman order. The so-called Holy Roman Empire must also be dealt with, either by dismantling it as a false pretender to the mantle of Rome or by seizing its crown for yourself. With the matter of Empire settled, it will be time to consider invasions of Iberia, the Balkans, and Anatolia. Completing this branch of the mission tree will reward you with 10% more manpower and land forcelimit for the rest of the game.

A united Italy must have a great navy, both to repel invasion from the sea and to launch invasions of its own. The Barbary Pirates inhabit the lan

d which was once Carthage, and later the Roman province of Africa. Once again it aligns itself against Italian interests, and must be annexed to ensure the safety of your trade routes. Before taking the fight onward to Egypt, it would be wise to secure an ally in Ethiopia, for the Kingdom of Prester John would surely aid your efforts. Jerusalem is the ultimate goal of this campaign, and once secured its religion will immediately be restored to your faith.

On the topic of Italy, we’ve added some new content about the Italian Wars: 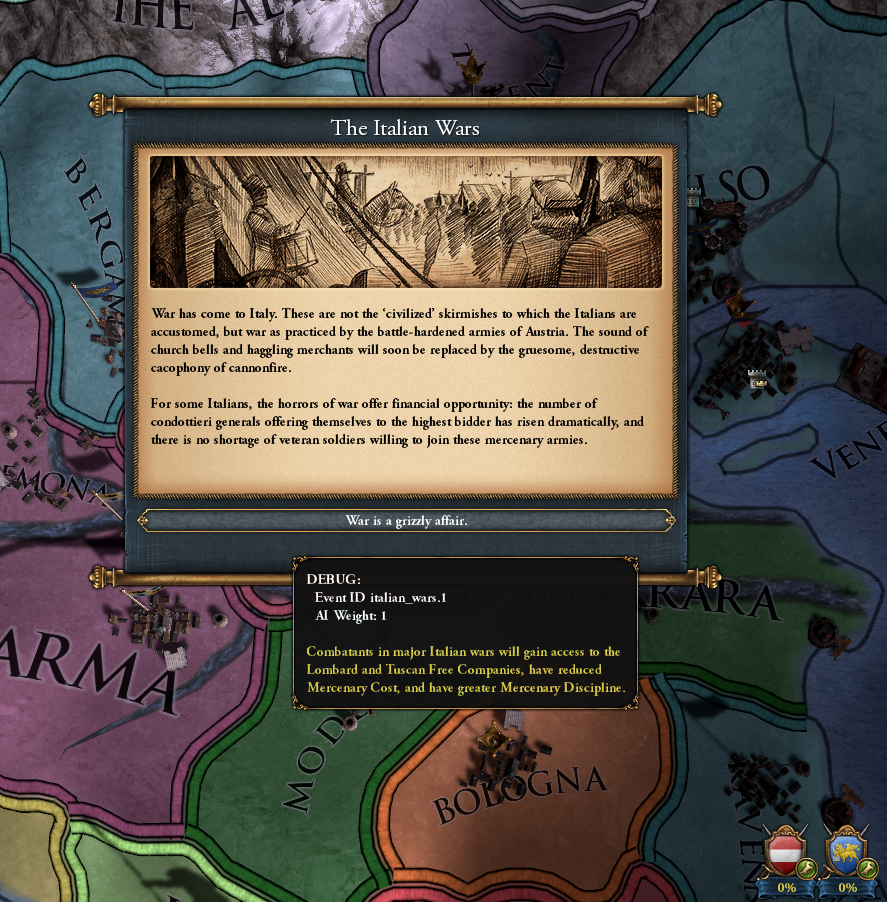 The Italian Wars can begin at any point during the Age of Discovery if an Italian country is the war leader (on either side) against a major Christian power - most likely France or Austria. Lasting for around 50 years, special Mercenary Companies such as the Tuscan Free Company will become available. Participants in the Italian Wars receive -10% mercenary cost and +5% mercenary discipline while they remain in an applicable war.

That’s all from me today. Next week Johan will reveal the major mechanical changes we’ve made to Catholicism, so come back next week to read all about it.
Last edited: Mar 17, 2020
Reactions:

Well swedish highschools are closing from tomorrow release the dlc so we can enjoy eu4 fully at home,
But for real hope all at paradox are ok and wash your godamn hands dont want the people making my favorite games sick.

Dalmatia? Is this a new tag?

Ominous said:
Release date of the release date when?
Click to expand...

I like these content, mission based dev diaries more than the heavy mechanical based ones (an unpopular opinion, I suspect), It would be nice to go through a few more of the Mission Trees as time goes on.

I think I speak for everyone when I say that the art for these new missions looks great!

What is the difference about Crusader States and Crusader States in the list for Emperor expansion? Is there some difference about their nationality, culture or regional locations? Is about Teutonic Order and Livonian Order? The new mission trees for the Italian minors concerns only the new nations (Saluzzo, Bologna) or also the previous minors (Mantua, Siena, Ferrara, Urbino, Lucca)?.
Last edited: Mar 17, 2020
S

All looks very cool! Are there many finisher missions with end of the game as the expiry for their perk? I really like it/find it rewarding to pursue when a modifier that you've worked hard for lasts indefinitely! And it's disappointing when some modifiers expire when they dont really change much - i.e. bharat gets 10% tech cost for the rest of the game but some modifiers like 10% dev cost etc. expire after 20 years. Please add more as cool finishers as a reward for your effort (and i get that often your reward is how strong you are, but it at least gives a reason to keep playing!)

In list of mission trees avaible with Emperor you have 2 times Crusader states (5th and 7th possition).

Is it just overlook or did you want to write something else instead of one crusader state?

What Eastern Catholicazation mission is about?
Toggle signature
We, the People, have Victoria 3!
N

Make Papal State to become eligible for HRE Emperorship please.
Toggle signature
Asking PDX about a patch of the most buggy update ever, aka paid 10$ and waiting 2 months for the game to be playabe:
Your x50 upvoted post was removed.

Isn't a Lotharingia tag being introduced? Will it get a mission tree as well?

fr-rein said:
What Eastern Catholicazation mission is about?
Click to expand...

neondt said:
Several of the missions for the Papal States give bonuses not only to the Pope himself but also to other Catholics. The Holy League for instance gives mercenary bonuses to the Pope’s allies, while Eastern Catholicization gives Lithuania a bonus to their Missionaries.
Click to expand...

@EasternTiger disappointing yet again
Toggle signature
We, the People, have Victoria 3!

finally - thank you.
But it would be great to get also some missions for the little trade cities of the hanse like bremen, Stade, hamburg, riga etc. and a bigger for a formable hanse itself. You added swabia and francia as "midgame" tags and gave them missions (what is great!) and did missions in the middle/north with westphalia and hannover what is great as midgame tags - but for the upnorth hanse it would be also awesome!

and also I want to say - it looks like the time you needed is well spend with a lot of mission trees and now also the "generic" missionpart by estates it looks like good content for a lot of playthroughts. thank you.
Last edited: Mar 17, 2020

Also still think that bosnia and its minor deserve a shared missiontree.

The Italian War Event look great - that is the flavor we need! How many Italian war events are there? Just the 1? Hopefully a lot to get sunk into

Also, shouldn't the rest of the Hansa get Hanseatic missions?

Will older mission tree be at least slightly changed too? It feels wrong when Russia has only 29 missions like the future Pope or Castile (not Spain). The potential is gigantic, mind you.
Toggle signature
https://forum.paradoxplaza.com/forum/index.php?threads/streltsy-disasters.1104950/ - my suggestion of unique disaster for Russia and nations with primary culture of East Slavic culture group

I hope there is going to be more content for Poland/Commonwealth as the mission tree is kinda of lacking for me with the generic mission in it still.
I know there are few small things talked about already like changes to the elective monarchy getting different modifiers and poland getting a unique estates privileges for the golden library. Was there anything else i missed there have been alot of dev diaries and i can't wait for the final release.
Show hidden low quality content
You must log in or register to reply here.
Share:
Facebook Twitter Reddit Tumblr WhatsApp Share Link
Top Bottom