Jump to latest Follow Reply
Menu
Install the app
You are using an out of date browser. It may not display this or other websites correctly.
You should upgrade or use an alternative browser.
Europa Universalis IV 77260 EUIV: Suggestions 16773 EUIV: Technical Support 6039 EUIV: FAQ & Strategy Guides 202 EUIV: AAR's, Let's Plays, and Fan Fiction EU IV: Alternate History Short Story Contest Contr 26

Welcome all to today’s dev diary, where I’ll be covering the long-awaited Iberian and North African map update coming in the 1.28 ‘Spain’ update. 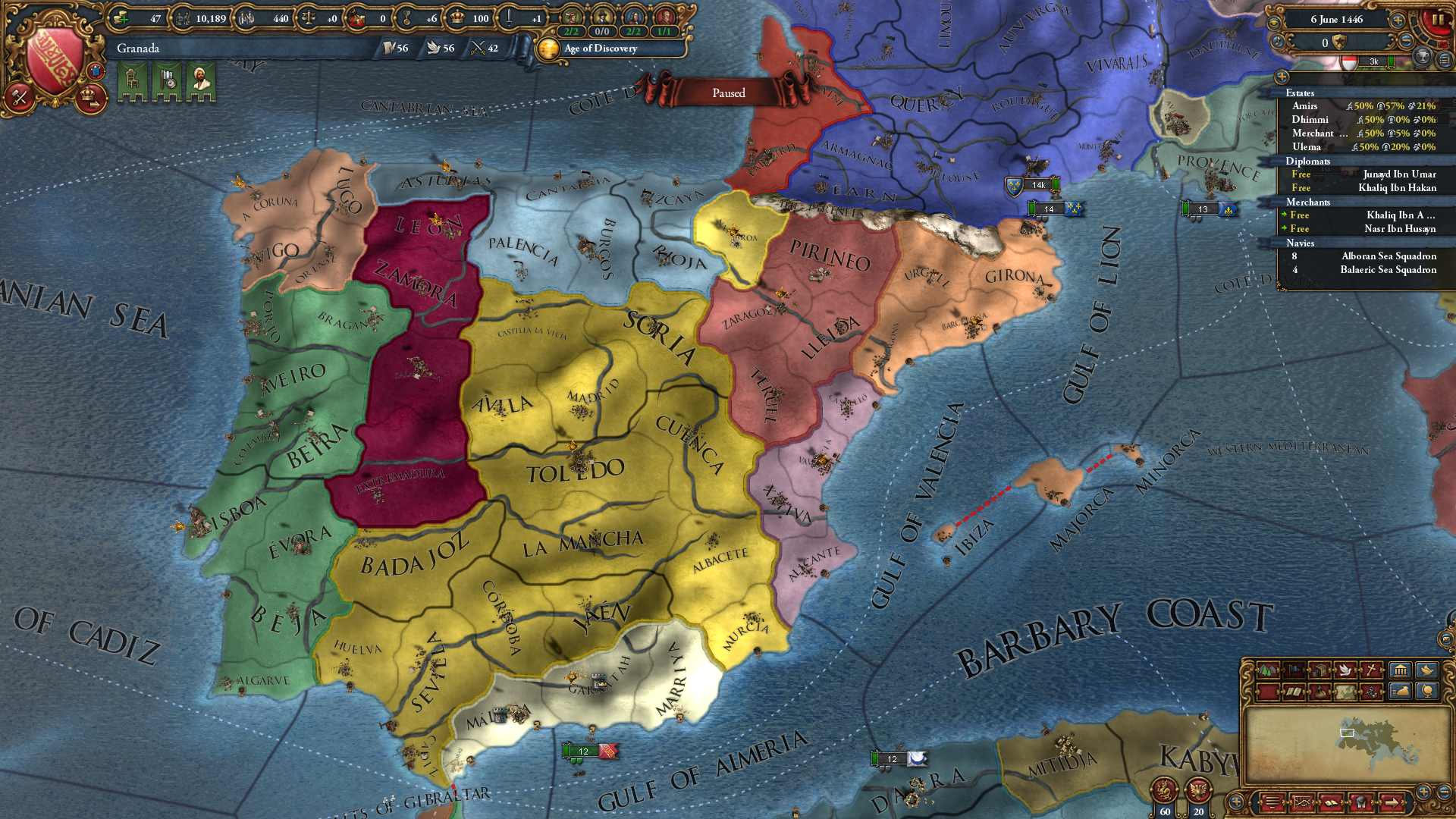 Nations released for the sake of example

As things currently stand, though as always things are subject to change before release, Iberia consists of 571 development over 63 provinces. This includes the Macaronesia area but now excludes Labourd, which has been returned to the French region.

In Aragon, the distinction between the Kingdom of Aragon, the Kingdom of Valencia, and the Principality of Catalonia has become more pronounced. Tarragona is now rightly in the Catalonia area, and the province of Valencia has been split so that Castello and Xativa have become separate provinces. Valencia itself has the potential to be a very rich city indeed, as the player’s actions can lead to it becoming a major producer of silk. The three major Balearic Islands have become provinces in and of themselves, linked together by a strait and comprising their own Area.

Likewise, Galicia has seen itself grow from 1 province to 4, and now has an Area all to itself.

Portugal and Granada have been gifted one additional province each: Aveiro and Malaga respectively.

Last but not least, many citizens of Navarra are looking a little confused as they wonder where their coastline has gone. Wedged between major powers and with no immediate means of escape over the ocean, Navarra will be a very challenging nation in 1.28.

Valencia: The Kingdom of Valencia was a major constituent part of the Crown of Aragon in 1444. In 1.28 the former kingdom of El Cid will be a releasable nation.

Asturias: The Kingdom of Asturias ceased to exist long before our start date, but it nicely fills the absence of releasable nations in the region.

I’ve also taken another look at North Africa. Here we can see several new provinces along the coast, including those belonging to new nations that can emerge during the game.

The province of Demnate allows a route through the Atlas mountains; a convenient shortcut and potentially a deadly choke-point.

The Canary Islands have been split between Gran Canaria and Tenerife to represent the somewhat incomplete Castilian conquest and colonization of the islands.

For the masochists among you who play as Granada, they now have a core on the province on Ceuta.

Salé and Tétouan: Home to some of the most infamous Barbary Pirates, these nations will be releasable in 1444, and may emerge dynamically in the course of the game in the style of Habsan. 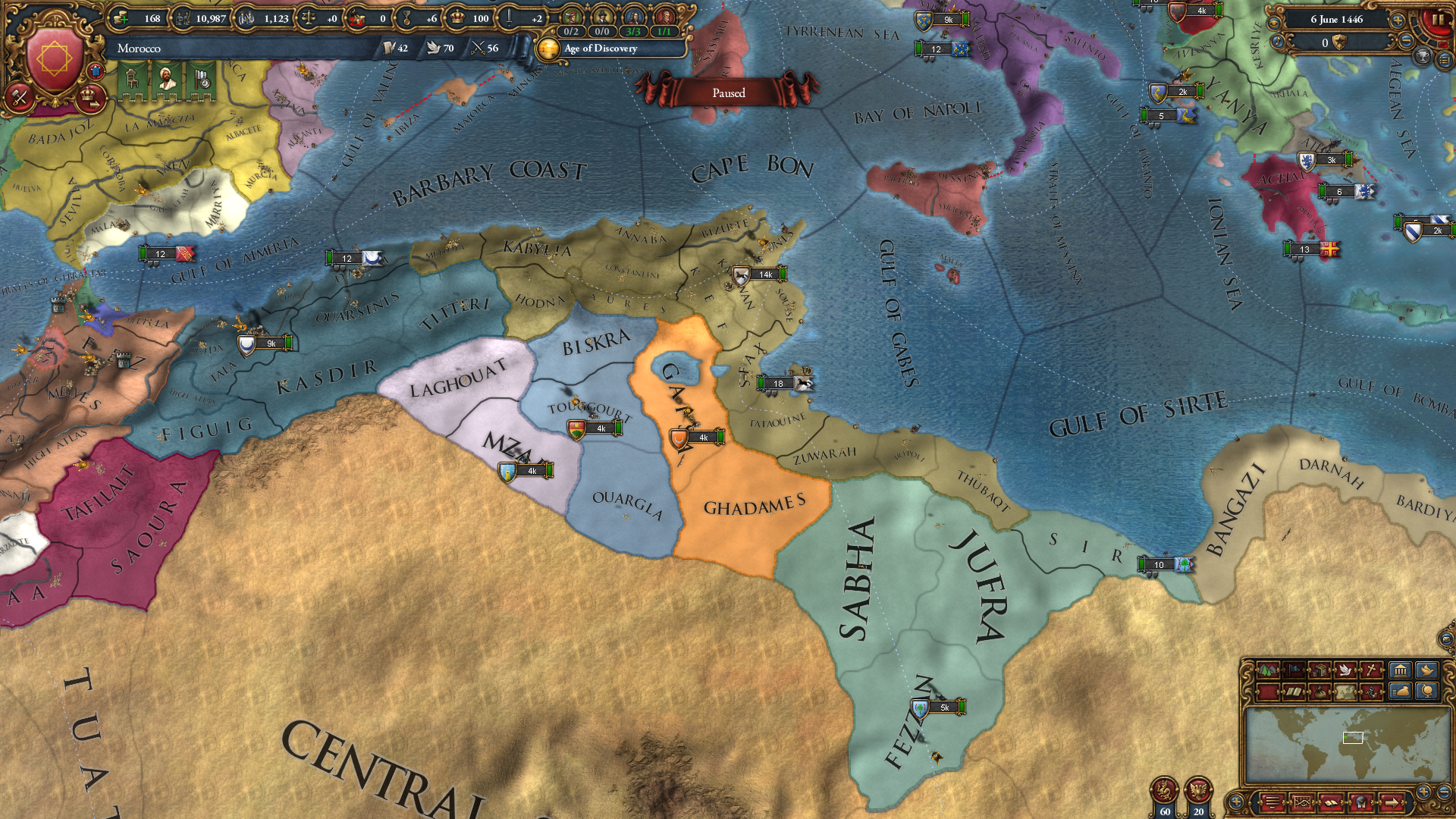 Finally, I’ve made some minor changes to the eastern Maghreb. The province of Kairwan has been added for Tunis, and the addition of Sabha has allowed a more aesthetic redrawing of Fezzan’s borders.

That’s all for today. Next week, @Groogy will reveal some of the new features coming in the as yet unnamed Immersion pack to be released alongside 1.28.
Last edited: Oct 9, 2018
Reactions:

neondt said:
Likewise, Galicia has seen itself grow from 1 province to 4, and now has an Area all to itself.
Click to expand...

Best change in entire update <3
Toggle signature
That'd be Groogy. He's kinda like the King Joffrey of these forums, toying with us for his own sick amusement. - DominusNovus
The Groogy is an elusive and magical creature. You do not find the Groogy, the Groogy finds you. - Enlil
I thought he was just created in a lab - Viking 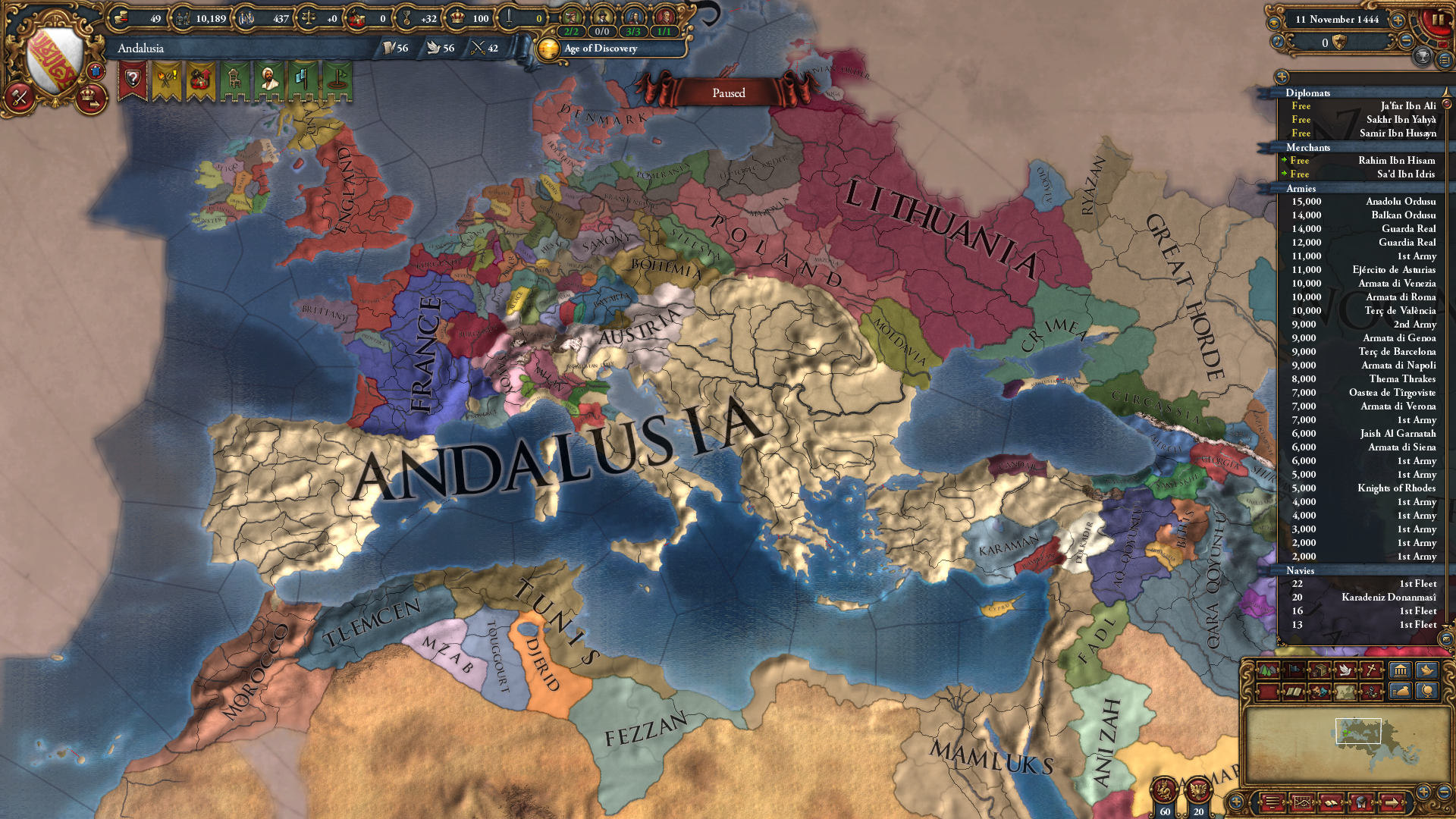 Definitely didn't make the Baleares into an island chain just for this.
Click to expand...

The best part of this was receiving this message the other day:
"Are you around? We want you to come and look at your country name stretching thingy
My desk
Something looks weird"

Some minor map tweaks ended up made in order to ensure the name of Aragon would be as beautiful in 1444 as it should be.
Toggle signature
~ Magne Skjæran - Crusader Kings 3 programmer
Follow me on Twitter for out of context quotes from Paradox

Meneth said:
The best part of this was receiving this message the other day:
"Are you around? We want you to come and look at your country name stretching thingy
My desk
Something looks weird"

Some minor map tweaks ended up made in order to ensure the name of Aragon would be as beautiful in 1444 as it should be.
Click to expand...

Turns out tweaking some sea zones can have a big impact on aesthetics. We love your country name stretching thingy <3
Toggle signature
EU4 Content Designer

Great! Iberia really needed an update. And with this update you could maybe add in Culture Mapmode to Starting Screen? Come on, you know you want it. Please?
Last edited: Oct 9, 2018
Toggle signature
Pre-industrial historical music epic megathread

Hopefully this won't be another Black Legend Fest, like much of base game Spain is.
M

Nice to see Map changes. Although if they are done in the style of new India, you are going to reduce the amount of development per state in a way, that makes most of Iberia not worth putting in States.
Here the current dev map as reference

Looks like some nice upgrades. Galicia in particular is a big winner.

Question: Does one seeking to form Rome need to colonise Tenerife, or can it be left empty?
R

Nice. Tbh i expected that Portugal will get a bit more.. they are so fragile. Castille has quite a few large provinces in the middle that could be happily halved.
More sea zones would be maybe interesting for naval game.
Toggle signature
Guides
Ages - Splendor abilities guide
State edicts guide
Suggestions
State edicts - qol and balance

neondt said:
Labourd, which has been returned to the French region.
Click to expand...

Think I would have been happy even if this was the only change in 1.28, but all the rest looks great as well.
Toggle signature
Tall Tales, a Tall France mini-AAR

Only one new province for Portugal? Hopefully they at least got a flat development boost, because they're really lackluster compared to their real life counterpart in this time period. Hopefully their rivalry with the Ottomans is also showcased in the missions and events.

@neondt
Is there a new tag for a country based on the Balearic Islands - revolter or otherwise? Feels weird to not have the Kingdom of Majorca on the map.
Last edited: Oct 9, 2018

That looks very interesting! But Iam confused - that are screenshots of all the releasble nations?
Could we also get a screenshot how Iberia starts at 1444?
Or is this the start-setup? That would be really crazy

Labourd, which has been returned to the French region.
Click to expand...

Best thing about this update.

No updates for the South France? A little bit dissapointing, IMO. Other updates are nice, though.
Toggle signature
https://forum.paradoxplaza.com/forum/index.php?threads/streltsy-disasters.1104950/ - my suggestion of unique disaster for Russia and nations with primary culture of East Slavic culture group

Nice. A Fort in Pirineo no longer controls access into Iberia from both sides of the Piranees.
Show hidden low quality content