Hello and welcome to today's development diary for Europa Universalis IV. After much plotting and espionage, I have assumed direct control over these diaries, at least for the upcoming months while Johan enjoys some paternity leave.

The feeling of power this gives is immense. EU4 will allow you a similar feeling with a new feature in the upcoming expansion: Great Powers

In 1.18's accompanying expansion, which has yet to be name-dropped, we will grant the 8 most powerful countries in the world a "Great Power" status, granting them bonuses, new diplomatic options and, perhaps most importantly, a glow around your shield to show that you are the superior nation.

Before we address the shiny options and bonuses available to you, let's tackle the question of how to become a Great Power. As we had mentioned in a previous diary, the technology system is getting an overhaul and the Great Power mechanic will make use of this too. Your ranking as a Great Power depends on your Total Development plus half of your Subject Development, then divided by your tech cost. This ensures that early game, large powers such as Ming and Timurids will enjoy Great Power status but as Other powers rise and they lag behind with embracing new institutions, this status will be lost. Of course, If Ming, for example, stays united and forward thinking, they may not lose this status at all. Subject Nations cannot be Great Powers

As a great power you will enjoy a Power Projection bonus. One commonly raised issue is that if you are a huge power without equal your Power Projection is oddly low, since you cannot have any meaningful rivals. The greatest of the Great Powers will enjoy a +25 Power Projection bonus, with the other 7 gaining an increasingly smaller amount with rank 8 getting +10PP. Additionally, great powers will receive a prestige decay reduction. Other modifiers will likely be added before release as we continue to balance the system. 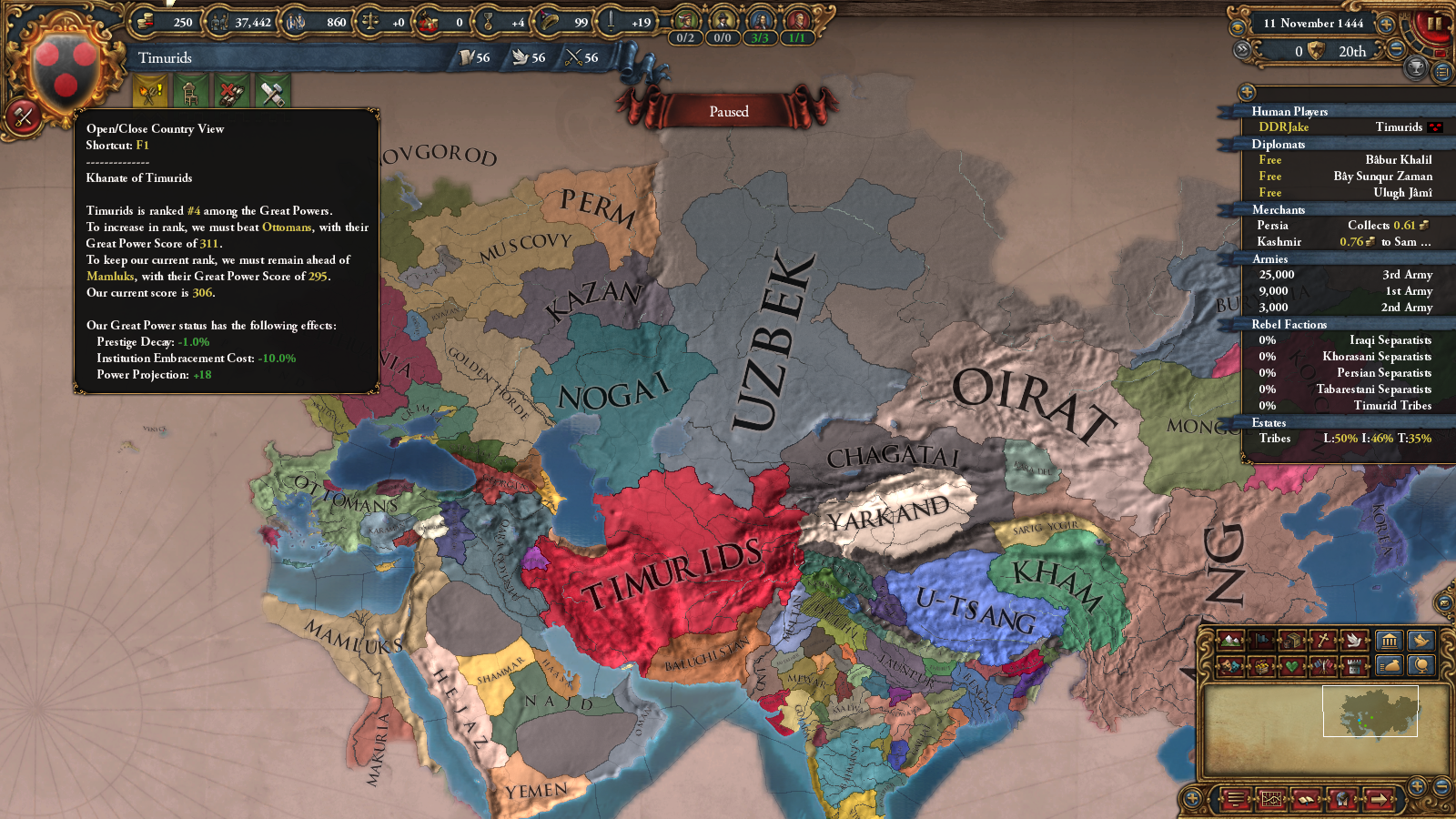 Bonuses are all very well and good, but where's the fun in being great if you can't enforce your will on lesser beings? Four new diplomatic options are opened up uniquely for Great Powers:

Take on Foreign Debt – Pay off all the loans of the target independent non-GP country. Gives +10 relations bonus for every standard size loan of the target you clear, capped at +200, decaying 2/year Also grants +1 trust for every loan cleared, or +2 favours if you have The Cossacks. Requires enough money to pay off target’s loans.

Influence Nation – Pay 1 year of target income to increase relations and grant +1 monarch points in their weakest category for 10 years in a target independent non-GP nation. This raises their opinion of you by 25 for the 10 years, also gives +5 trust. Going to war with them cancels this bonus.

Intervene in War– If there is an ongoing war between great powers but an imbalance in the number of GPs involved, you can make it your business to intervene. For example, if GP Britain is singlehandedly fighting GP France and GP Spain, you as a Great Power Commonwealth can intervene on Great Britain's side to balance out the number of great powers involved.

Break Alliance – This will force a nation to break its alliance with another. They will accept if the target nation is sufficiently afraid of you and you will gain a truce with the nation you force this upon. Useful for stripping your war target of pesky roadblocks. 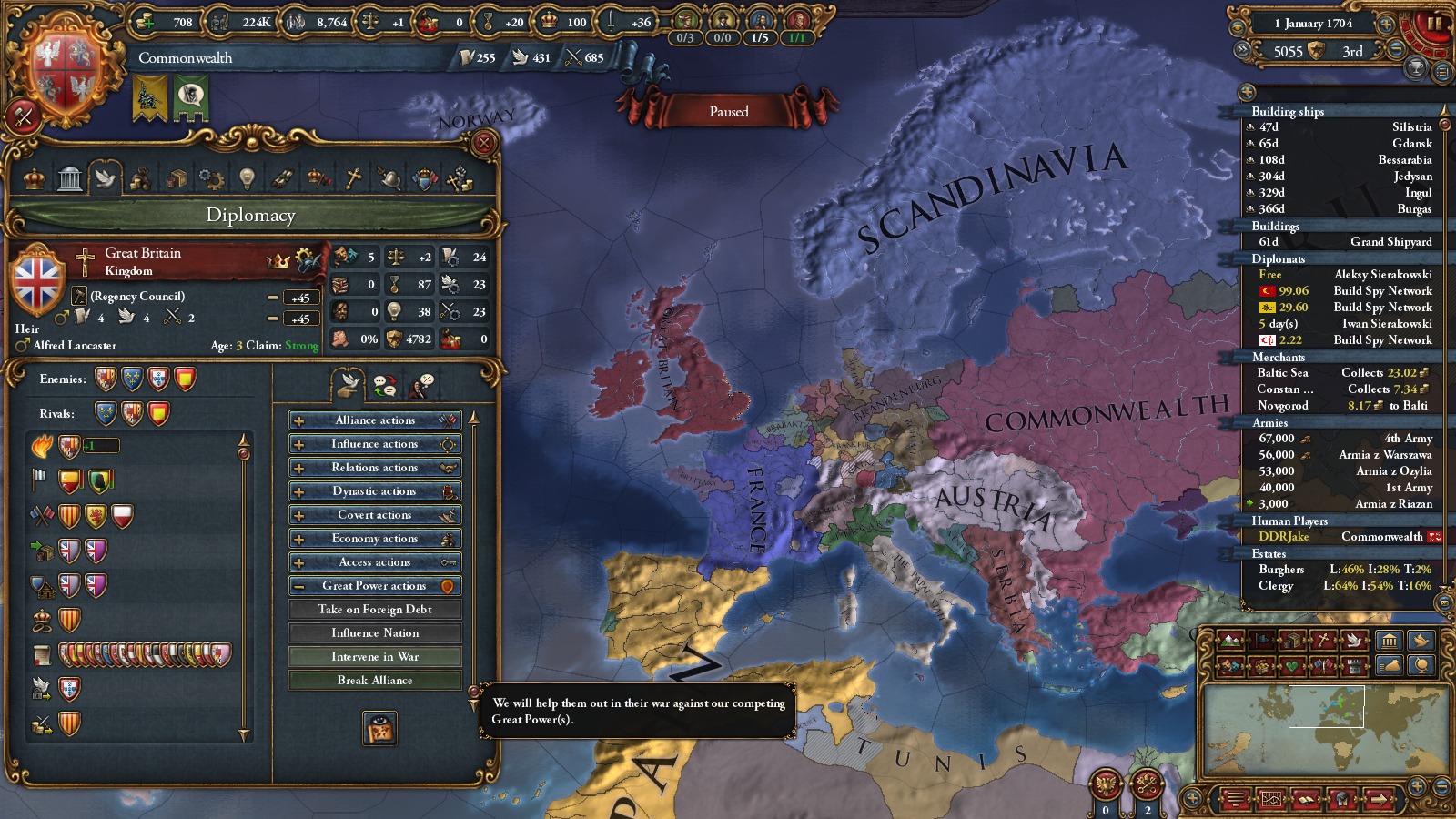 Finally, you will want to hold on to your status as a great power. If you are pushed out of the top 8 nations, you will be given a 5 year grace period to regain your Great Power Score. During this time you will still have access to Great Power options but if you cannot regain your standing then you will lose them until you rise again or topple those who would claim to be greater than you. 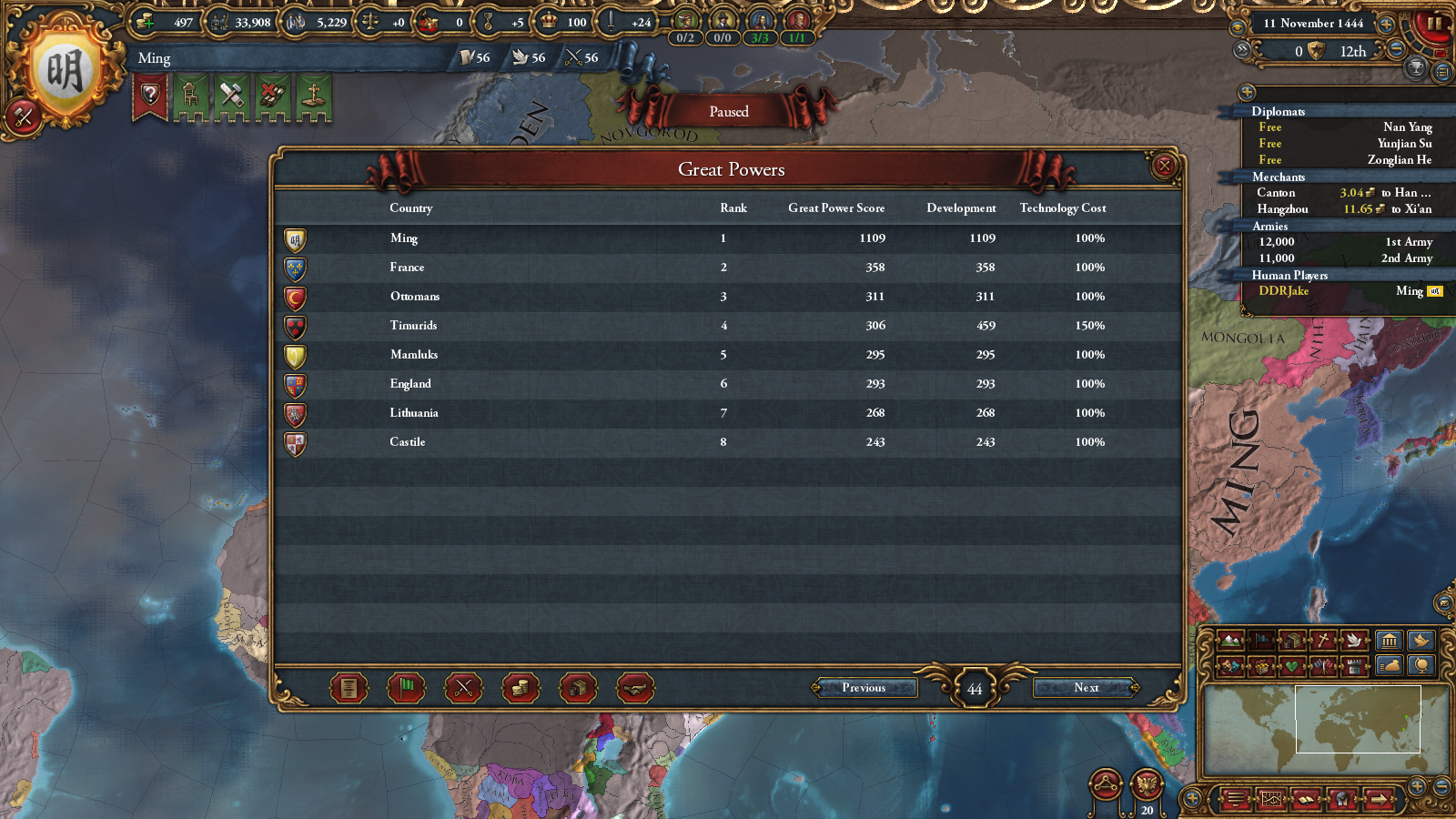 As usual, the nitty-gritty numbers are very much subject to change as we refine the features.

Great Powers will be available as a paid feature in the upcoming expansion, which will be released alongside the 1.18 patch.

Next week we'll be in the presence of our King/Khan/Chief/Sultan/Emperor/Malik, so I hope you're on your best behavior.
Reactions:

Posted 1 minute ago? Haven't ever been this lucky!
Reactions:

Esteemed Emperor of Emperors and Lord of the world

This may lead to some crazy snowballing..
Reactions:

So I see Paradox's secret plan is to actually integrate Victoria III into EU IV.
Reactions:

DDRJake said:
Your ranking as a Great Power depends on your Total Development plus half of your Subject Development, then divided by your tech cost.
Click to expand...

Seems fun, but nations who are already among the top 8 powerful probably doesn't need another power boost.
Reactions:

DDRJake said:
Intervene in War– If there is an ongoing war between great powers but an imbalance in the number of GPs involved, you can make it your business to intervene. For example, if GP Britain is singlehandedly fighting GP France and GP Spain, you as a Great Power Commonwealth can intervene on Great Britain's side to balance out the number of great powers involved.
Click to expand...

I'm a bit worried that this will make wars a lot more unpredictable again. Will intervening also be possible if one side has one GP, and the other side doesn't have any? Also, will there be an indication in the Declare War screen if a Great Power will be likely to intervene in the war?
Reactions:
L

Seems like a great feature with more of a historical focus than a gamey one. Nice!
Reactions:

I see the GP score is dependent on your development modified by your technology cost. Interesting. Do you plan on adding more modifiers? I believe your development should take local autonomy into account. For example: Ming is a lot weaker than they appear because all their provinces have a minimum of 50% autonomy, halving their strength. Also, I think your current technology levels, rather than your technology cost, should determine how "great" a power is. Otherwise this is a malus to nations who have lots of monarch points but not the right institutions, despite them being on equal footing to other great powers.

Either way, I am very excited to see some alternative to power projection implemented for very powerful nations. It was kinda silly how someone too big for rivals had 0 power projection.

Finally, is that a government form overhaul you are teasing us with there, jake?

Edit: also, would love the ability to enforce peace on non-GP nations regardless of opinion. Blobbing can get pretty frustrating when random minors are sieging down all the stuff you need.
Reactions:

Paul31264 said:
I'm a bit worried that this will make wars a lot more unpredictable again. Will intervening also be possible if one side has one GP, and the other side doesn't have any? Also, will there be an indication in the Declare War screen if a Great Power will be likely to intervene in the war?
Click to expand...

I think unpredictability is a good thing, and I say this as someone who gets frustrated and rage quits if a war doesn't go my way. I think wars should carry risks, especially when being fought against great powers.
Reactions:

Oh, could we have a geography limitation to intervening in wars? Worldpolicing in multiplayer is strong enough as it is without a dedicated mechanic (I've seen Italians and Manchu tribes joining wars in India to prevent Golden Horde from forming Mughals in 1505...), and even in Victoria 2 you're not really supposed to care about crisis that happen outside of your continent.
Toggle signature
Join our open EU4 multiplayer group
Reactions:

I think the Holy Roman Emperor should get at least some bonuses towards being a great power, considering the HRE bonuses make the emperor considerably more powerful than other nations of the same size
Reactions:

I'm guessing/hoping that this feature, which I like, will be accompanied by a "Balance of Power" feature (or maybe just a modifier for increased AE?) - where other great powers will try to avoid one great power towering over the others, especially if they are close to each other?
Reactions:
O

If I'm not mistaken, currently there are twelve countries holding the status of Great Power, so it will be decreased to eight?

Interesting. Something like this was definitely missing, but what's still missing from the diplomatic options GPs get is... diplomatic options that are directly beneficial to them instead of some other nations. Besides, I wonder if it would be possible to intervene in a war where say the Commonwealth, Austria and Spain wage war against just the Ottoman Empire, and join on the former side if the latter is stronger even though they are single. Or even if they weren't stronger. What happens if there are two GPs fighting on each side? Does their rank as GPs has any bearing here? Break Alliance is very cool.

Though I wish not every diplomatic action gave you truce with the target. I know it's for balancing, but it slows the pace of the game. Perhaps there's some other way to do this? In my opinion, now that this system exists, one GP should ALWAYS be able to rival another GP. If anything, besides PP bonus, GPs should definitely receive bonus Diplomatic Reputation.

I also see some unfamiliar - new perhaps - icons on the second screenshot.


Daldry said:
I think the Holy Roman Emperor should get at least some bonuses towards being a great power, considering the HRE bonuses make the emperor considerably more powerful than other nations of the same size
Click to expand...

Indeed. That's one example where the power is not based on development. Though these are rare in the game, they should definitely be accounted for.


Krajzen said:
I cringed a bit upon seeing Lithuania instead Muscovy as a great power
Click to expand...

I cringed a bit upon seeing your post >_<. Should have actually been Poland, not Muscovy. But it seems Poland, like Austria, suffers from the fact that the system solely relies on development.


BlackPrince said:
This may lead to some crazy snowballing..
Click to expand...

Well... From the looks of it there won't be any more snowballing than there is now. The Power Projection bonus is as it should have been. The Prestige bonus is irrelevant at this point. Lastly, all the diplomatic abilities GPs get directly benefit others, not them.
Last edited: Jun 9, 2016
Toggle signature
When nobody is looking, I play Muscovy. I ravage Novgorod, terrorize the hordes, instigate and wipe out all dissidents and ensure that Scandinavians all speak Finnish. -Jake 'DDRJake' Leiper (31/03/2017)
The True Fall of Constantinople - a reminder of the true history of PDX Dev Clash
Make vassals use up only 0.5 diplo relation slots
Atwix's Guide to Coalition Dodging and Aggressive Expansion - an absolute game changing must read
Our approach to historicity in design is mainly one of flavor and inspiration - we want mechanics that feel appropriate to the era, but historical accuracy ultimately takes a backseat to gameplay. -Martin 'Wiz' Anward (02/07/2015)​
Reactions:
Show hidden low quality content
You must log in or register to reply here.
Share:
Facebook Twitter Reddit Tumblr WhatsApp Share Link
Top Bottom