Good afternoon all. It's Thursday meaning that we are due a development diary for the upcoming EU4 expansion: Rights of Man.


Last week we gorged on five new features: Disinherit, Strengthen Government, Prussian Monarchy, Debase Currency and Abandon Personal Union. Today we'll be taking a light snack with just one, which is in no way related to me being busy with moving home at the moment. 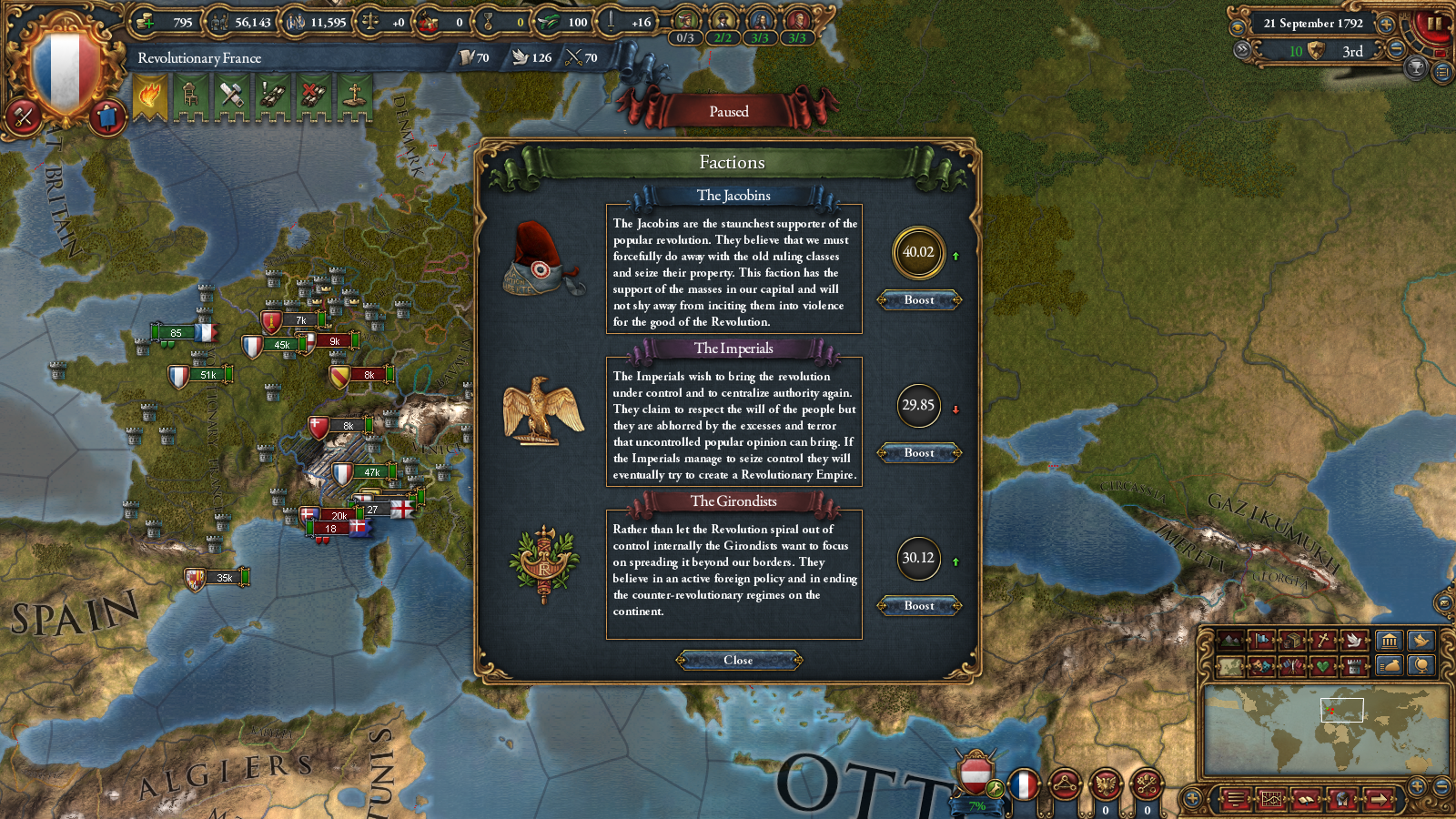 Three factions will wrestle for influence in your nation, which you can boost using ADM, DIP and MIL points.

Jacobins cost ADM to boost and gain influence from Republican Tradition being high. When they are the leading faction they have the following effects:


Imperialists cost DIP to boost. If their influence is high and republican tradition is below 40 then they can seize control to turn your nation into a Revolutionary Empire.


Girondists cost MIL to boost. They want to bring the revolution to other nations. They gain influence from being at war and lose it from being at peace.

So essentially you have your stabilizing faction, your empire building faction and your warring faction. Balance their effects and bonuses to either spread the empire far and wide or consolidate your holdings. If you allow yourself to "stabilize" into a revolutionary Empire, you will leave the faction system and return to a monarchy, albeit the best* monarchy in the game.

As is often the case, there are new events to coincide with them, usually affecting the influence of your factions. 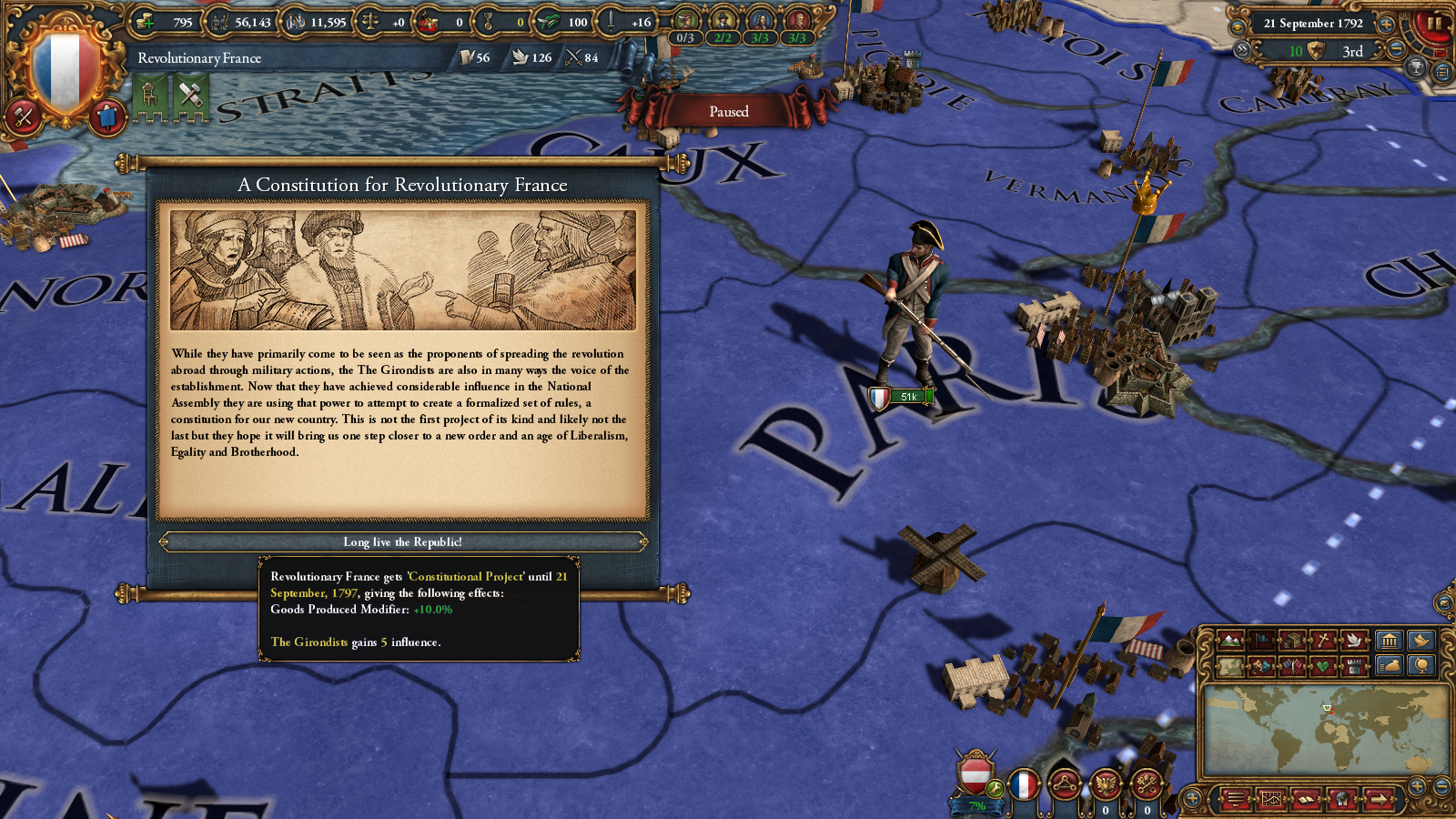 Revolutionary Republic Factions will be a paid feature in the upcoming Rights of Man expansion, which will be released alongside the 1.18 Prussia Patch on 11th October 2016.

If you thirst for more (and why wouldn't you?) perhaps I can interest you in checking out the feature stream for Rights of Man with myself and Johan


*Not counting Hordes, of course.
Reactions:

I hope the Tag modifiers and awesome governemnt stats are still there, if so I might have to redo my beloved Revolutionary Golden Horde Run

Also the worst thing that has ever happened to me as a Revolutionary republic as as italy having france steal the tag from me some how after I got the rev republic tag first
Last edited: Sep 8, 2016
Reactions:
B

@DDRJake, can u watch this one
Toggle signature
Paradox like a drug dealer.
Reactions:
K

Are they more likely to pop up (particularly earlier) now?
I've never actually seen a revolutionary country in game before, although I have only played 1 game right through to 1821 so far.
Reactions:
S

But will there actually be a mechanic for the near continuous stream of coalitions against france?
Reactions:

Maybe make it possible to have revolutionary republic appear 50 years or more earlier in the game so more people will be able to experience this interesting feature
Reactions:

Is it just me or the imperial eagle has a baguette under it's foot?
Toggle signature
The game I'd love to play, if Paradox ever made it, (and a little extra detail).

"Identity Politics" is an euphemism for "Civil Rights", and "Political Correctness" one for "being respectful of other people".
Reactions: Flavor names for other countries?
Toggle signature
Thou shalt not make a machine in the likeness of a human mind.

IFWanderer said:
Is it just me or the imperial eagle has a baguette under it's foot?
Click to expand...

Not sure why I have a sudden urge to sing some revolutionary songs...

Although I must say that the factions seem to be France-specific, given the names and icons. Is this intended, or will there be cultural or national variations?

As a sidenote a mistake snuck into the diary, with "Royalists" rather than "Imperialists".
Toggle signature
User Mod Index: the CK2 User Modification Index for mods, utilities and guides. Post in it to add your new mods or updates.
When the World Stopped Making Sense: developer for this CK2 dynamic & historical Migrational Era mod 476-600 (+) mod created by Enlil - 0.9.13!
Emendatio Historiae Imperatoris: developer for this Imperator: Rome historical and flavour mod.

Disappointing Dev Diary, especially after having to wait longer than usual. This is nothing new, why is it even part of the paid features? They even say it's just like Ming or Merchant Repiblic factions.

On the other hand, some sort of revolutionary HRE mechanic would be awesome. Something to portray the transnational spirit of the revolution, where spreading the revolution to other countries earns you something like manpower or money (these are just generic examples). But the idea is that you have to keep spreading revolutionary fire, because doing nothing will make you lose these bonuses. Perfect reflection of something as fleeting as revolution.
Last edited: Sep 8, 2016
Toggle signature
When nobody is looking, I play Muscovy. I ravage Novgorod, terrorize the hordes, instigate and wipe out all dissidents and ensure that Scandinavians all speak Finnish. -Jake 'DDRJake' Leiper (31/03/2017)
The True Fall of Constantinople - a reminder of the true history of PDX Dev Clash
Make vassals use up only 0.5 diplo relation slots
Atwix's Guide to Coalition Dodging and Aggressive Expansion - an absolute game changing must read
Our approach to historicity in design is mainly one of flavor and inspiration - we want mechanics that feel appropriate to the era, but historical accuracy ultimately takes a backseat to gameplay. -Martin 'Wiz' Anward (02/07/2015)​
Reactions:

OldmansHQ said:
Disappointing Dev Diary, especially after having to wait longer than usual. This is nothing new, why is it even part of the paid features?
Click to expand...

Because it is absolutely non essential, and will probably not be built upon as a major expansion in the future? You know what they have always donne for paid features.
Reactions:

Like Merchant Republic, we will miss estates which give enormous benefit for the country when we play as Revolutionary Republic. So we will just boost Royalist and make Revolutionary Empire like Napoleon did- if 1.18 provides much better gameplay which makes us play until the era of revolution, such as nerfing late game forts.
Last edited: Sep 8, 2016
Reactions:

Is there any basic government that gets Prussia's mechanics in the same way that constitutional monarchies can use English monarchy mechanics?
Reactions:

KerbalRocketry said:
Does the faction system for Revolutionary Republics remove estates from them same as other faction systems?
Click to expand...

Yes.
Toggle signature
No fighting in here! This is the war room!
Reactions:

This is SUPER dumb this should NOT be a paid feature, I can literally mod the exact same factions into the game.
I don't think anyone is going to buy the DLC for this particular reason either so I honestly don't see the point, but whatever is not my company lol
Reactions: