Hello, and welcome to another week, and another Europa Universalis development diary. This week we’re focusing on the interface improvements of our ‘Denmark’(1.19) update.

First of all, we’ve added more options to the player. You can now specify the ledger to be limited in multiplayer games, where detail data about other nations are hidden, but you can still use the ledger to keep track of your own nation.

Another cool new option is the ability to disable the rule that you can not stack ideagroups. Now it is possible for those that want, to go all military ideas in their games.

The Custom-Nation-Designer have gotten two new addition in 1.19. First of all, you can now choose to start without an heir, and secondly, for those that also have the Rights of Man expansion, it is now possible to define your consort. 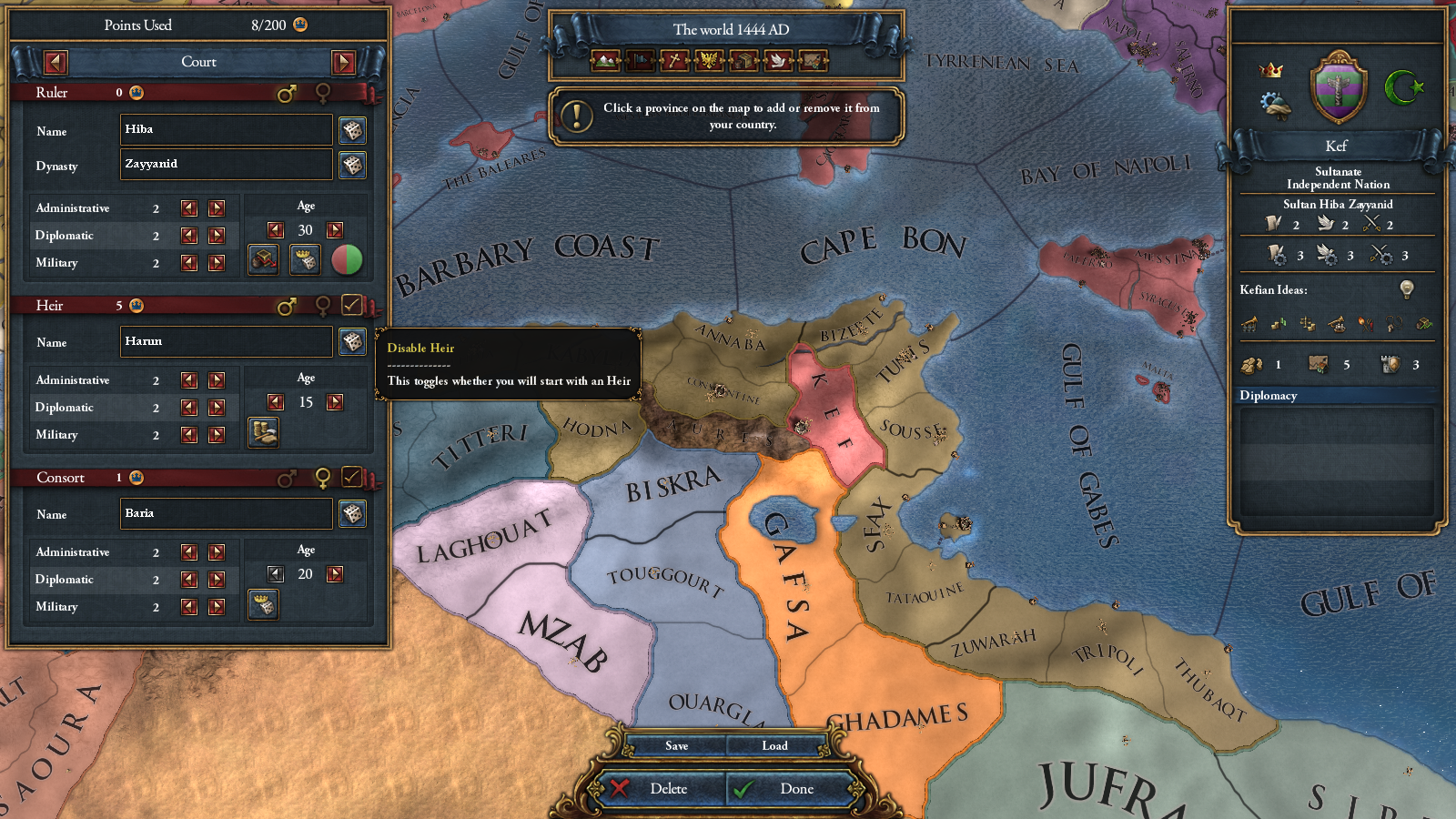 We also added two new things to the province view. Besides the possibility to fabricate claims on that province directly from the province interface, there is now an icon for hostile attrition that is shown whenever a province provides it.

The religious UI have also been upgraded, and you can now see missionary strength in the interface, so you can plan better for the future. Another important aspect is the addition of another column in list of provinces to convert, detailing of how much that particular province impacts the religious unity. 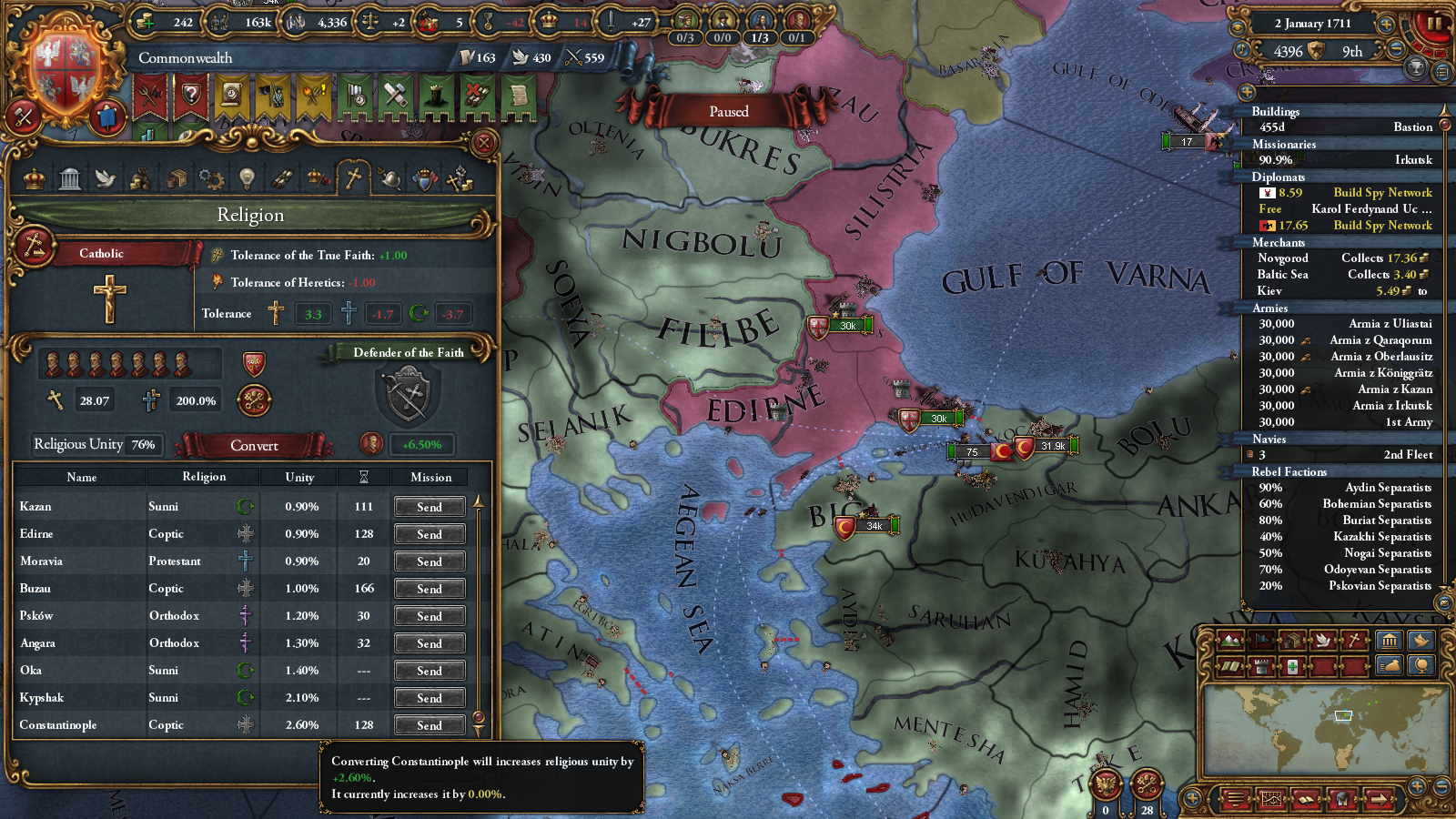 A previous patch added a “skip to next song” button. This has now been replaced with a button that opens up a full interface to select which songs are allowed to play, and to select a song to play with. 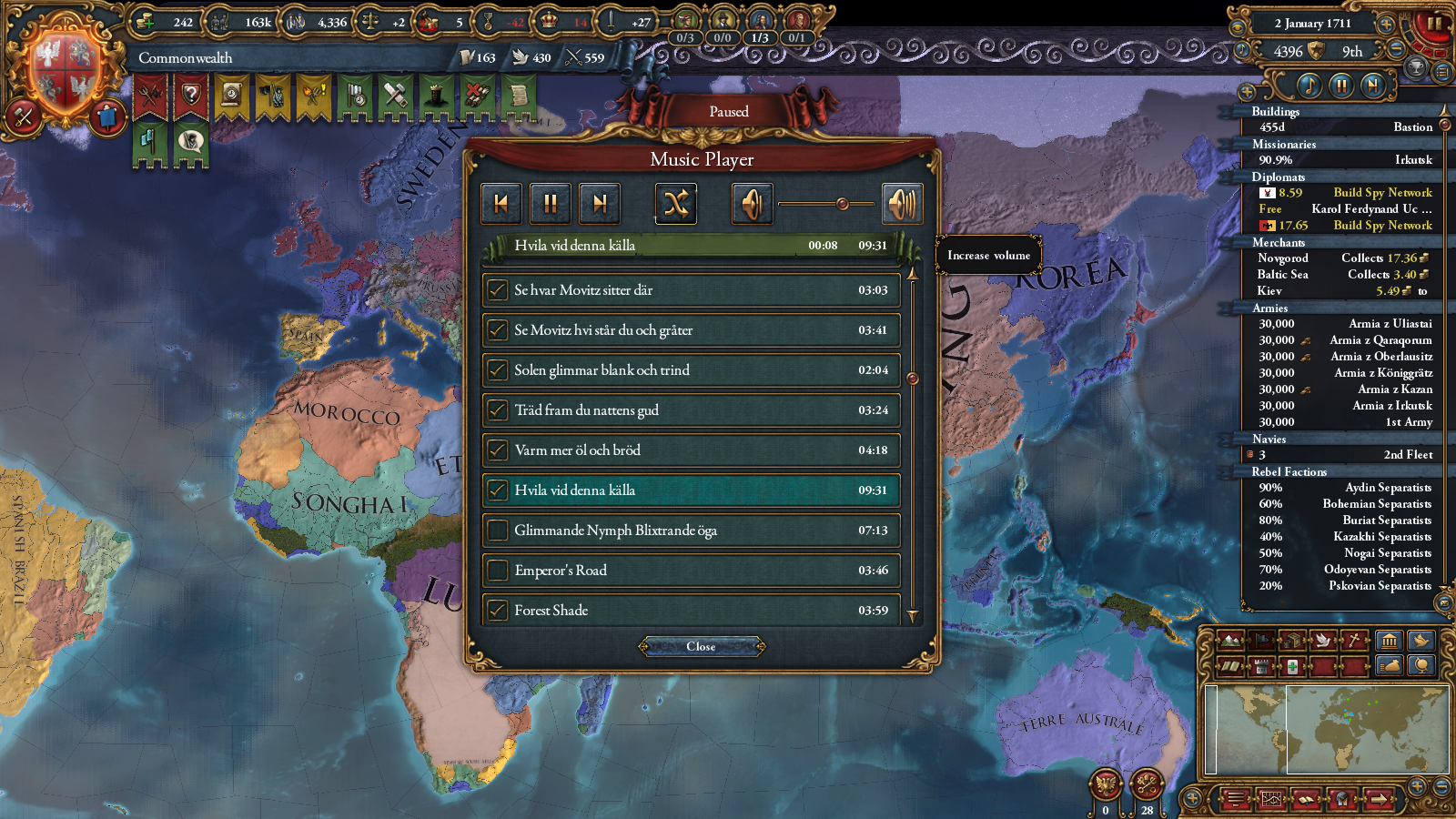 There is now also an alert for high naval attrition that triggers for fleets that are taking more than 5% attrition and have a ship with hull strength less than 50%.

And for those of you playing with Rights of Man & Common Sense, and with lots of subjects and vast colonial empires, we added a checkbox to hide subjects in the development macrobuilder.

Some important information for those of you that mod EU4.

Republican Tradition refactored to be 0-100 like Legitimacy, Horde Unity and Devotion, so remember to go through your scripts when you update to support 1.19.

We also merged the 'relations_decay_of_me' modifier into 'improve_relation_modifier'. They were basically the same functionality, and this makes the game easier to understand.

Next week, we’ll let the artists take to the podium to talk about the new graphics in 1.19!
Last edited: Nov 8, 2016
Reactions:

First and second images are the same. I think that's wrong.
Reactions:

Leo_Boon said:
Looks good. Are the impassable regions coloured by geography (brown in the desert, white in arctic areas)? That Nubia looks different from the Norwegian Alp impassable region.
Click to expand...

It's an option for unowned land in general. Coloring by surrounding owners is also still an option for wastelands
Toggle signature
No fighting in here! This is the war room!
Reactions:

i think the 2nd screenshot is not correct
A

Also, can you guys stretch further the UI? The war and peace screen is too small for large resolutions. It makes it tedious to scroll down to see the effects of declaring war and seeing what you can demand when suing for peace.
Reactions:
J

Are you still planning to have a beta patch out next week?
Reactions:

Game is now unplayable, please fix grammar.
Toggle signature
To anyone who uses "oh, but the name of the game is Europa Universalis" as an argument for Paradox's many ROTW nerfs, please don't. With that logic, Victoria 2 should only be about Britain, Crusader Kings should never let you play as a female monarch and Hearts of Iron should only let you play as Fascist nations.
Reactions:

The attached file, so much convinience I no longer have to use the development screen to do conversions.

We also merged the 'relations_decay_of_me' modifier into 'improve_relation_modifier'. They were basically the same functionality, and this makes the game easier to understand.
Click to expand...

I think it should be the other way around. Relations Decay is less tedium and most importantly affects AE of everyone at once. Improving relations with everyone on the other hand requires you to manually send diplomats.
Reactions:

I would love to have an option to start with limited information in the ledger that gets slowly more accurate/reveals more details as you send spies towards the country you want to get information from. Is there a chance of that being incorporated into the game?

Figuring out if outdated information is correct, if estimates are accurate, etc. would bring the game to a whole new level - it could even get more/less important depending on the difficulty level you choose.

PS. Maybe this would require spies to be an actual person like diplomats, etc. If so, I'd welcome that as well, would make espionage ideas really cool as well.
Last edited: Nov 8, 2016
Reactions:

VanguardZero said:
I think it should be the other way around. Relations Decay is less tedium and most importantly affects AE of everyone at once. Improving relations with everyone on the other hand requires you to manually send diplomats.
Click to expand...

I think you've misunderstood what was said.

What was said is that instead of separate modifiers for the two things (BROT and ImpRel), there is one.
Toggle signature
MEIOU & Taxes is only conditionally awesome.
If you don't want politics in your games, play Tetris.
Ceterum censeo Featured Content banner delenda est.
Reactions:

Also, will the music player display both the normal and metal versions of songs when we bought the respective DLCs? And what about music we added via mods? If both are included in the shown menu, this would easily be my favourite feature for 1.19!
Reactions:

Silistre and Bessarabia are still not fixed.
Toggle signature
Fighting for a good map since 1444.