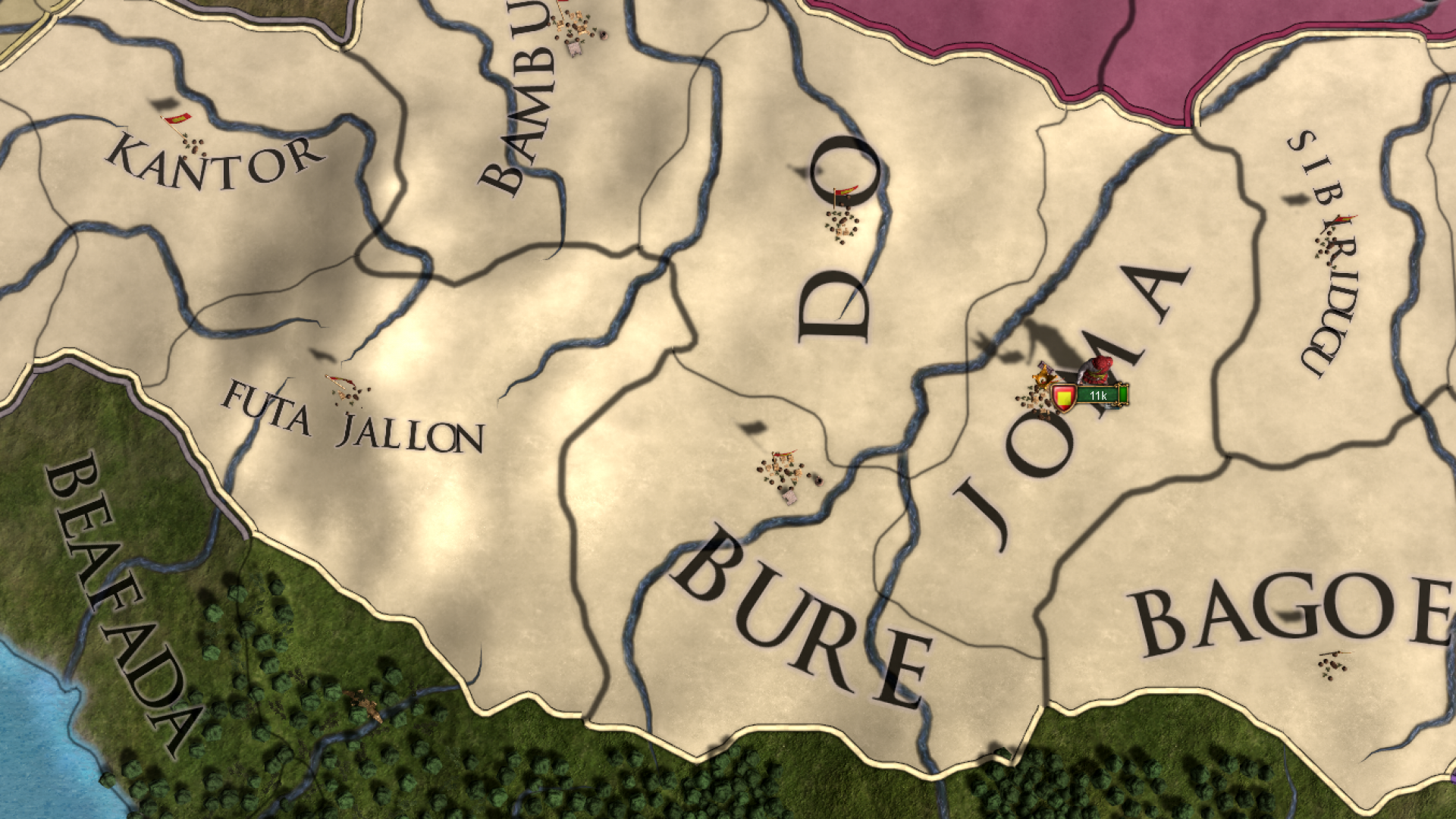 After the summer break, I am honored to present what the new content will be about!

But first, let me introduce myself as it is my very first time to write in the official forums instead of just lurking here.
I am Ogele, a content designer from Germany, who joined around the time of the release of Leviathan, and as such I got directly thrown into a lot of script bug fixing. Prior to joining, I was (and still am) a modder for EU4 - the one or other might know me already as Comrade Flan on Steam. Oh, and if somebody wants to complain about the bugfix of Fars' color: that was me - so to all the fans of Yellow Fars, I am sorry for your loss.

With that said, it's time to move to the actually exciting new stuff for the new Content Pack which will be focusing on Sub-Saharan Africa.

Before diving into the mission tree I want to say that this is all still work in progress. As such, everything still is subject to change.

Mali is a realm which has outlived its time of glory, and is spiraling into irrelevance during the timeframe of EU4. Starting prior to 1444 with the death of Mansa Suleyman Keita, the brother of the famous Mansa Musa, Mali has been facing civil wars and poor leadership. As such, Mali has not a good time starting in the game as they will have to face the Disaster Decline of Mali. 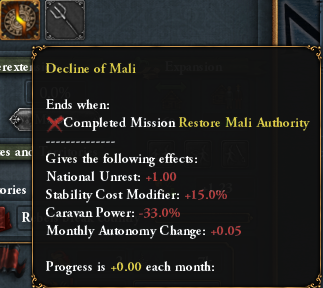 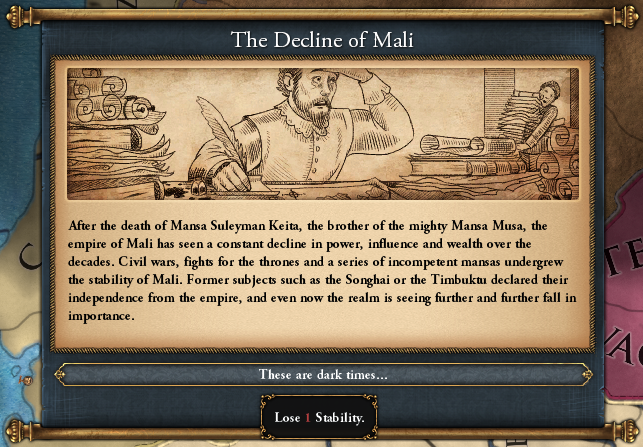 Icon and event picture are not final.

While the modifiers themselves are not the end of the world, Mali will have to face a series of events: 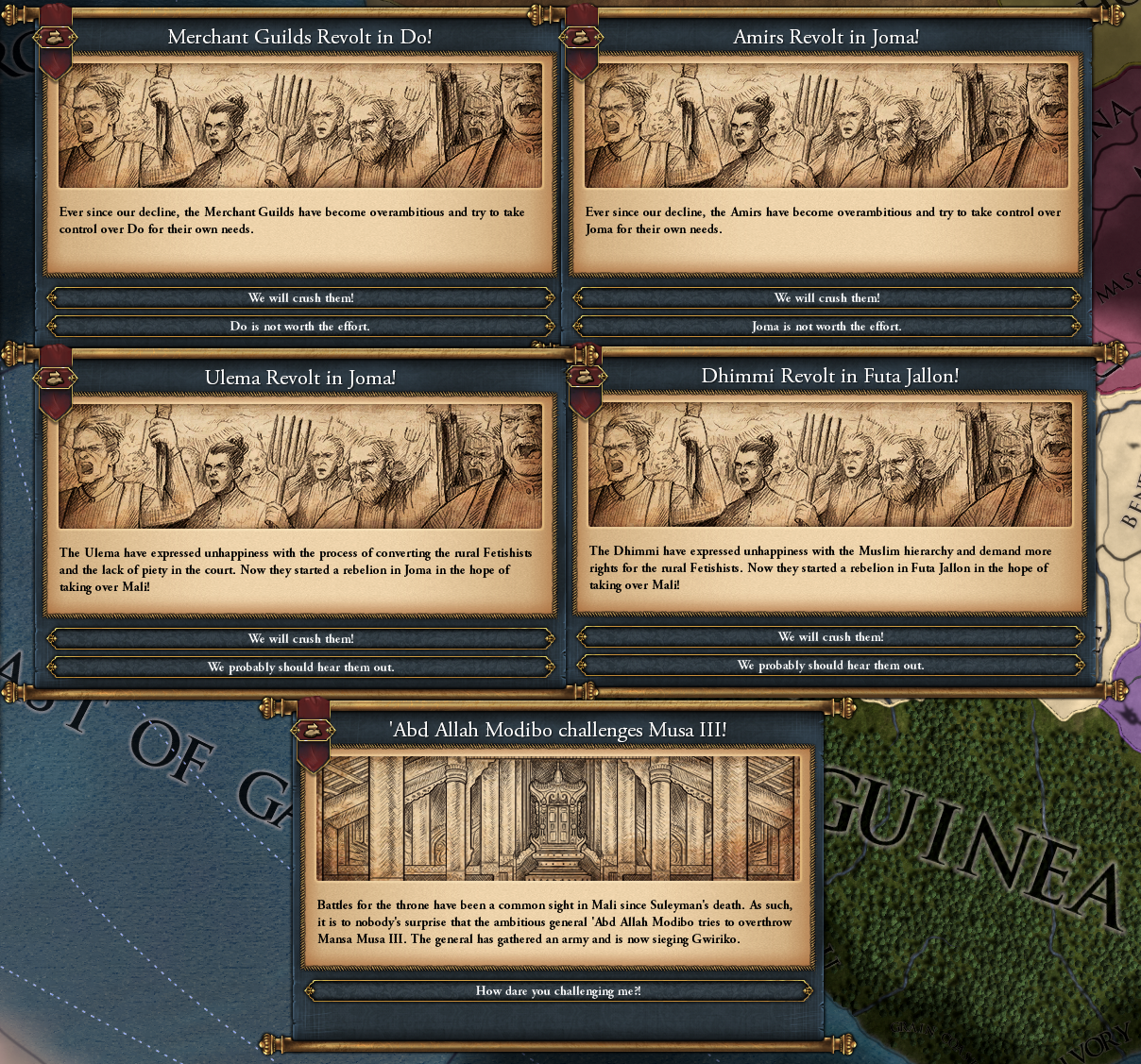 There are a few more disaster related events, but I think these will suffice.

Now the question is: how do you end this disaster? Well, the mission tree has the solution

The mission tree is split into three parts: Reconquest of your former borders, dealing with the Disaster and a little bit of colonization. The most right side of the tree is the one you will focus the most in the early game as its rewards remove some of the disaster events, making the Decline much more bearable. They will remove the Pretender rebels spawning on every new monarch, make the estates loyal for your cause and remove the estate rebellions and will finally ensure that provinces, which are core of other nations, remain loyal to you instead of revolting. At the same time, the missions in the middle part will push you into conquering former territory back, giving permanent claims over Macina, Jenné, Timbuktu and Songhai. An additional bonus of the missions is that each conquest of a new territory will grant you +1 Stability as long you have the disaster active. Also, while you conquer after your heart's desire you will fire these events through the mission tree: 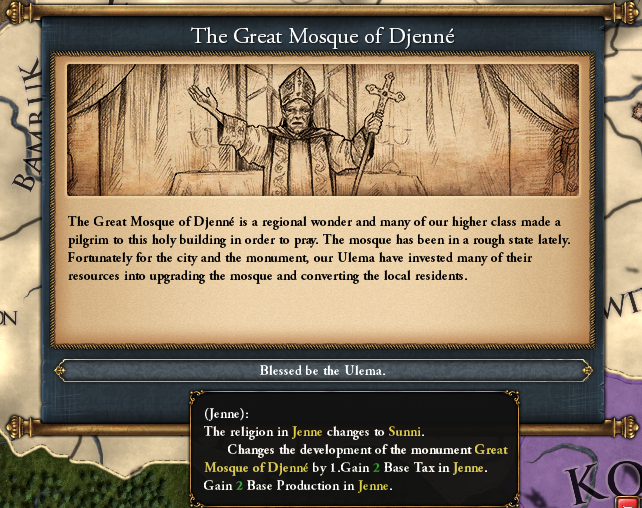 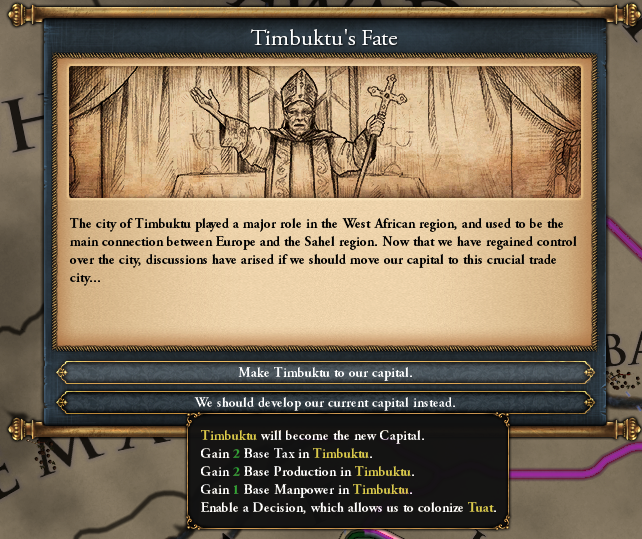 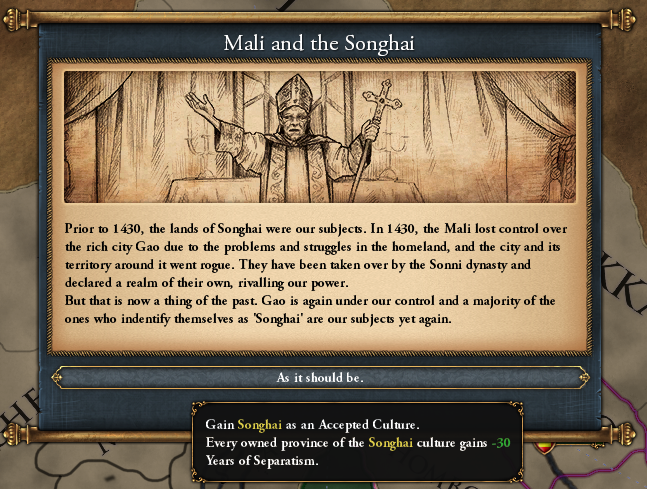 With the Restore the Empire mission you can finally retake your status as an Empire, and if you also finish the mission Handle the Kaabu you can finally put an end to the Decline as you have clearly proven that Mali has recovered from the disaster. Restore Mali Authority will end the disaster and gives you -15% Stability cost and -0.05 Monthly Autonomy. After dealing with the disaster, it is time to step into Mansa Musa's footsteps and try to outperform his generosity. But first you will need to get the income for that, and because of that the missions following handling the inner troubles will focus on developing the main sources of income, which are Gold and Ivory. Completing the mission Gold and Ivory will allow you to use a brand new estate privilege and will fire an event, which is beneficial for every owner of ivory provinces: 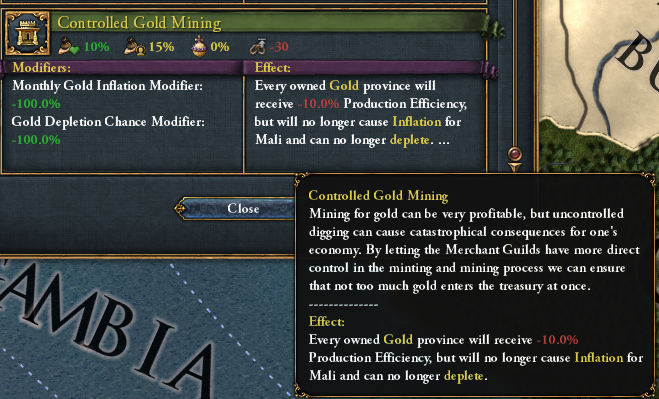 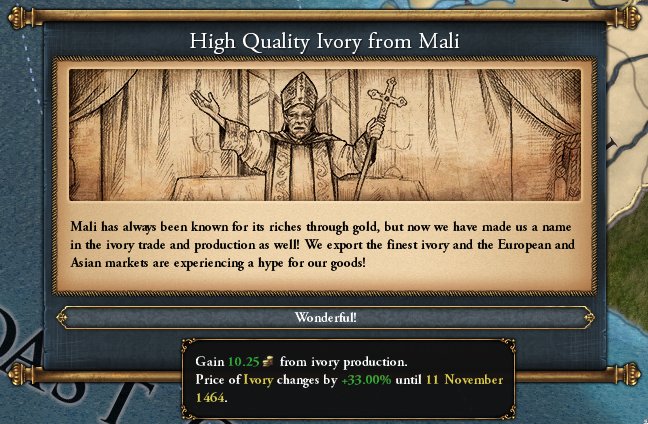 Now that the gold question has been solved you can now relive the history and make a pilgrimage to Mecca. By ensuring that the owners of Ankara, Kairo and Mecca have the "Sent Gift" opinion modifier, you can complete the mission Show Generosity and get an event which allows you to invest into Mecca, either adding a Great Mosque and making your own Ulema happy or adding a Counting House and making your own Dhimmi happy.

Finally, it wouldn't be a Mansa Musa experience if you don't crash the economy of a whole country. With the final mission Dominate Europe's Trade, which requires you to have a strong trade presence in either of the European trade nodes and having 15,000 Ducats without any loan will, you can unleash the sheer amount of gold you have hoarded upon Europe! 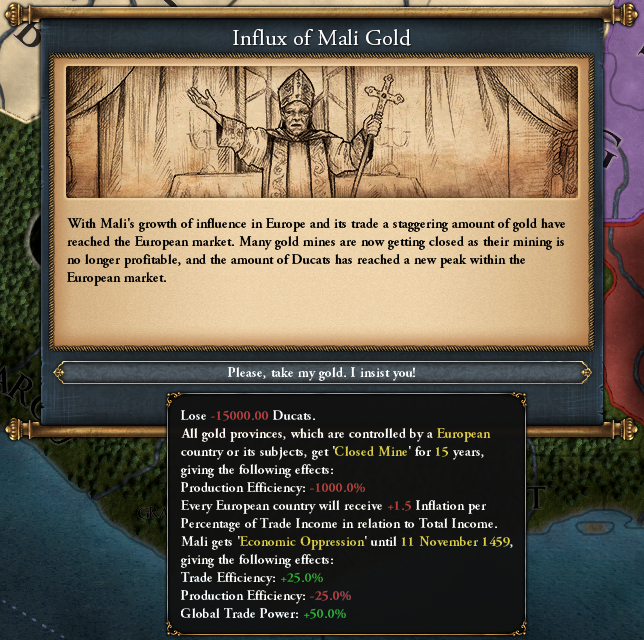 If you wonder what the result will look like... well... here you go. Poor Genoa will never financially recover from this 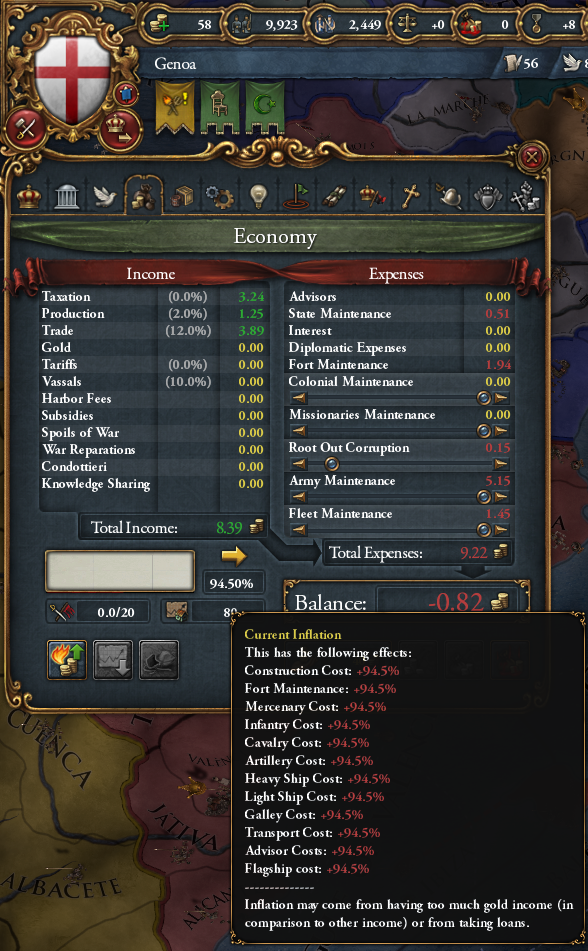 ​
While I am at it: I want to point out that this effect is still in balancing phase, and that it has only 10% of the effect for player countries and their subjects. While I like to add rewards which make you feel good, I don't want them to be an auto-win against other players. Of course you can argue that it is an auto-win against the AI, but it must be considered that you have to be a economical behemoth already to get this mission done. Also, it is very satisfying to see the pop-ups coming over the year of AI trade countries declaring bankruptcy.

Now to some other smaller highlights for Mali:
That's all for today! There are a lot more things I would love to talk about, but I think I am stretching that dev diary more than enough already. With that said, next week we will take a closer look at Songhai. Until then, have a nice week!
Reactions:

I want to personally tell the people who were saying it was going to be England or France again "I told you so".
Reactions:
M

Nice to see more stuff for Africa.
Will the new content pack feature no new mechanic as implied in the last DD?
Toggle signature
Sit now there, and look out upon the lands where evil and despair shall come to those whom thou allied. Thou hast dared to mock me, and to question the power of France, master of the fates of Europe. Therefore with my explorers thou shalt see, and with my spies thou shalt hear; and never shall thou be released from vassalage until all is fulfilled unto its bitter end.

Interesting, however some of these modifiers will likely be intensely overpowered, say the gold mining privilege.
Toggle signature
Powderkeg of Europe - Victoria 3 Balkans Megathread

Determinism in EU4 and prior games
Reactions:

I hope that my favorite sub-saharan nation of Bonoman also gets some sweet content
Reactions:

Will the Cape of the hope region remain uncolonized?
Reactions:

I like that there are a lot of events - hope there are more. Does the owner of mekka get an event about the mali event? This 2 country events really opens the flavor for me as a player as it makes the world more alive when i play as a country controlling mekka and get an event about mali.

Are there events regarding the Marroko or european neigbours? I guess there are so many possiblities to feel it with more flavor.
Good job!
Reactions:

Change it to goods produced. As gentleman above mentioned prod eff does nothing there.
Reactions:

I really hope there are more wasteland provinces added to West Africa, it is boring being able to expand so easily in any direction. Would make for more strategic play.
Toggle signature
It's time for EUV.
Reactions:

Crashing the economy of a whole continent sounds fun! Just one question, how is "a European country" defined? Capital on the European continent, or by tech group?

Edit: the answer is "capital on the continent".
Last edited: Sep 7, 2021
Toggle signature
Dynamic Ideas: an EU4 mod which makes the AI forgo its fixed historical ideas and chose random, but appropriate idea groups instead (dated since incorporation into base game)

Can you confirm whether there will be any map changes at this time? Also what the scope of the content pack will be. Just West Africa/Guinea or everything south of the Sahara.
Reactions:

IndigoRage said:
Can you confirm whether there will be any map changes at this time? Also what the scope of the content pack will be. Just West Africa/Guinea or everything south of the Sahara.
Click to expand...

We are not planning at changing the map more in EU4's lifecycle. I am tired of people's savegames being broken.
Toggle signature
Johan Andersson
Studio Manager Paradox Tinto - Follow me at Twitter!

Johan said:
We are not planning at changing the map more in EU4's lifecycle. I am tired of people's savegames being broken.
Click to expand...

That makes sense, I guess, even if it's extremely disappointing. I was holding out hope for map reworks with the content packs before the game's plug is pulled. Especially South America where most of the region is flat nothing. Will future content packs as the game's life cycle is being wrapped up still feature releasable or formable tags?
Last edited: Sep 7, 2021
Reactions:

Nice! Africa really needed some love.
But one question about the pack : will we finally have new event images for Africa? Because right now, the default images are really immersion breaking.
Reactions:
F

Ah so now Subsaharan African states will have new national ideas before key countries like Venice which have been in their golden age at the start of the game and more complete mission trees than some allegedly "Tier 1" countries like Ottomans which still has half of their tree as generic missions.

Not that I have anything against Subsaharan Africa being made more nuanced, it was a criminally underdeveloped region made with 19th century understanding still persisting today but how hard can it be to do some pass on idea set of Venice, which is literally one of the most important states of 15th and 16th centuries that has not been changed since start of the game. At least revamp Ottoman mission tree that has half of it as generic missions and other half as nothing but temporary claims in wrong order and without covering real history of Ottomans let alone alt-history missions.
Toggle signature
EU4:
Venice, their government, finances and navy
Victoria 3:
Ottoman Army Reform and State of Ottoman and Egyptian Armies in 1836
Reactions:

Everything looks really nice, but 2 things:


Controlled gold mining seems really exploit friendly as a concept, regardless of numbers tuning. What will prevent people from rushing it and over focusing on overdeveloping gold mines at the expense of everything else? Or turning it on and ignoring it if the numbers are tuned low?

Unleashing 15 000 gold sounds really cool, but either not worth it or too catastrophic depending on the final numbers. It also seems like a pointless cosmetical "I already won the game" button. Maybe it could be remade as a "reverse golden age for enemy" choice. Perhaps it should be on a cooldown but its effects more localized (like they where historically). Maybe a choice to target all the provinces in 1 or 2 trade nodes instead of all of Europe? Or only 1 rival? That way Mali would get a truly unique ability and a "gold themed nation" flavor instead of a meme decision.
Last edited: Sep 7, 2021
Reactions:
G