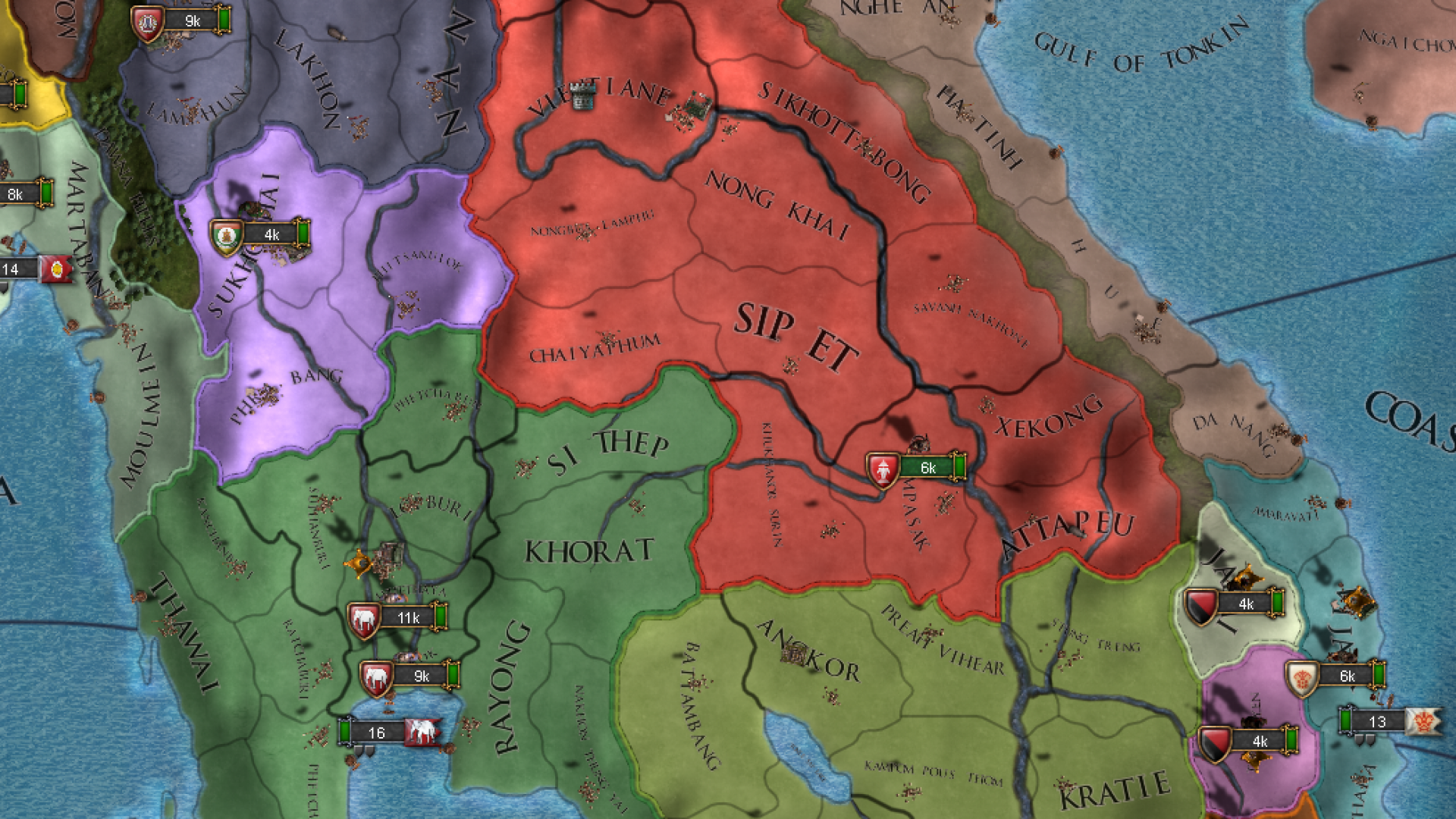 Good afternoon! I am once again eschewing the traditional Swedish summer vacation, this time because I’d prefer to wait until I can safely travel rather than taking a dull staycation in my Stockholm apartment. What that means for you lovely people is that you get summer content dev diaries! Let’s get right into it! 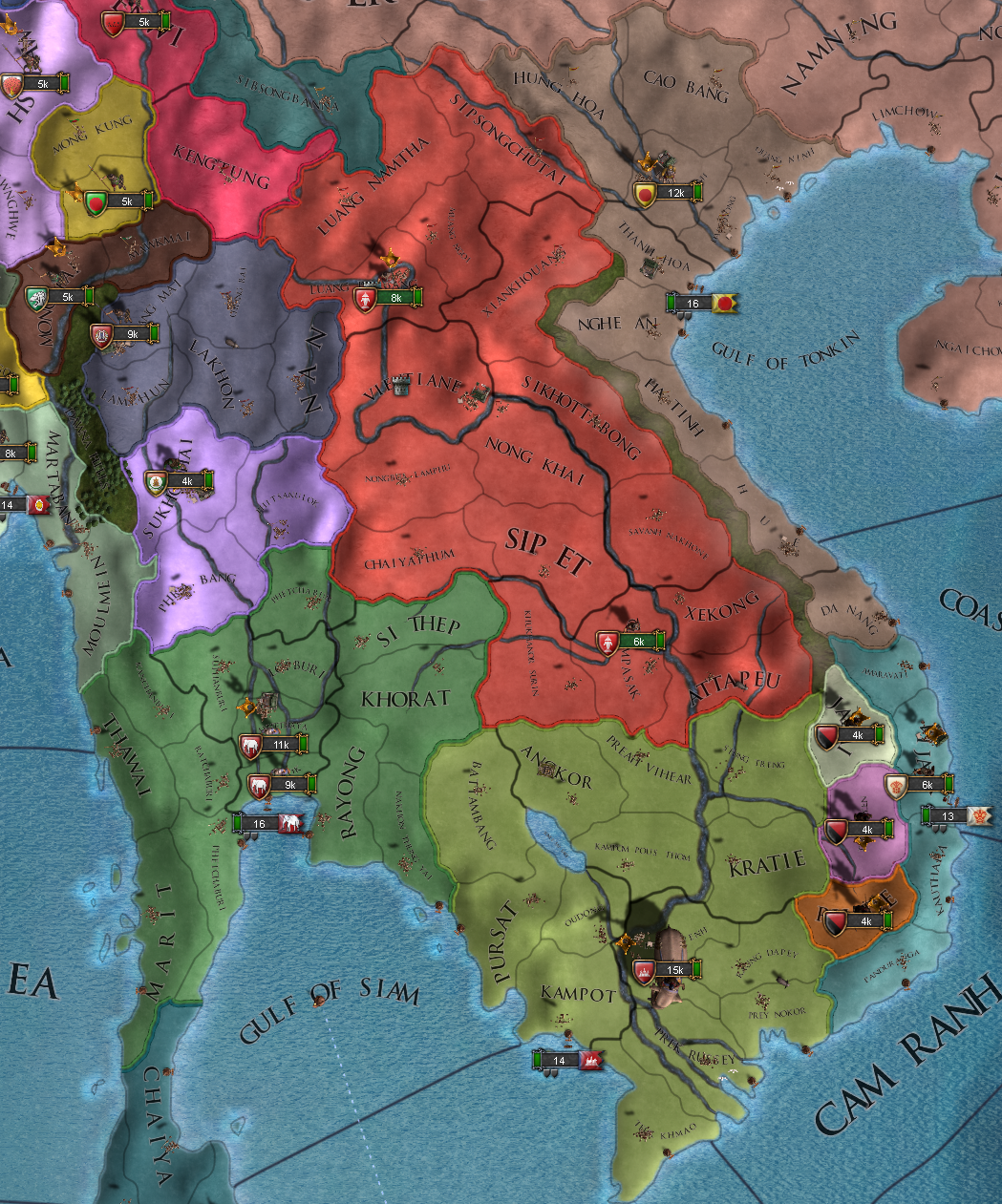 Those of you who know me even slightly will be aware that I love all things South-East Asia (SEA). After 2.5 years on the project, I finally have the opportunity to create the SEA map rework of my dreams. Shown above is Mainland SEA. Burma/Myanmar is excluded from the map rework as I feel that the treatment I gave it during the development of Dharma still holds up. There will certainly be new content for nations in that region however, including what another dev fondly described as the “Shan mission stick” when we played MP this weekend.

The country setup has not been radically altered. The only new additions to the 1444 setup are the tribes inhabiting what is today the Central Highlands of Vietnam. I have, however, added many new provinces and increased the total development of the region significantly. According to the logs, the indo_china_region now contains 64 provinces with 542 total development. Note that these numbers, like all numbers presented in dev diaries, are not final. I’m especially satisfied with how Lan Na fits into its 5-province state, bordered on its west by impassable terrain. Speaking of impassable terrain, the Annamite Range now separates Vietnam from much of Laos, making Dai Viet a drastically more defensible nation.

A design goal for Mainland SEA nations in the 1.31 update is to emphasize vassal play and the development of capital super-cities. We’ll talk about various ways that this will be achieved another time, but one prerequisite for the goal is having nations to vassalize: 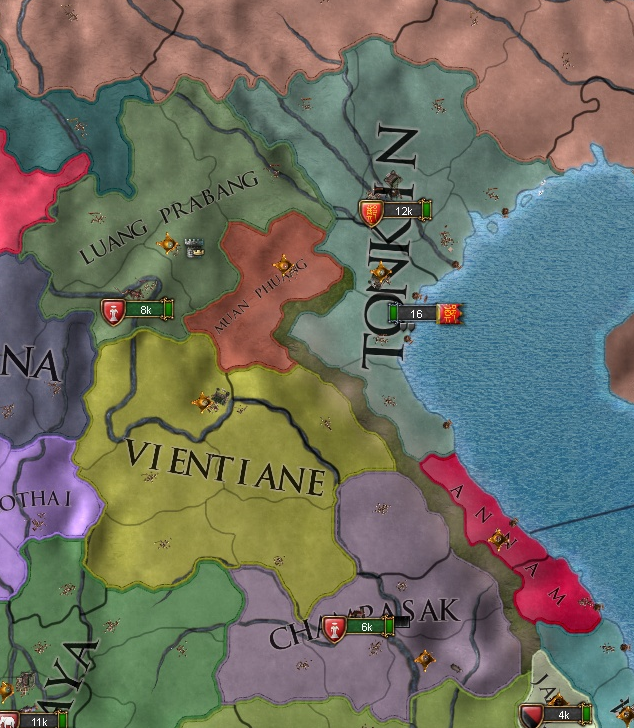 Several releasable nations now have cores on territory held in 1444 by Lan Xang and Dai Viet. These nations actually already exist in the game files, but are very rarely seen in 1.30 due to their lack of cores. Unfortunately there aren’t really any sensible ways that I’ve found to divide Ayutthaya or Khmer, though in Ayutthaya’s case Sukhothai can still serve as a vassal to which you can feed your Thai provinces. 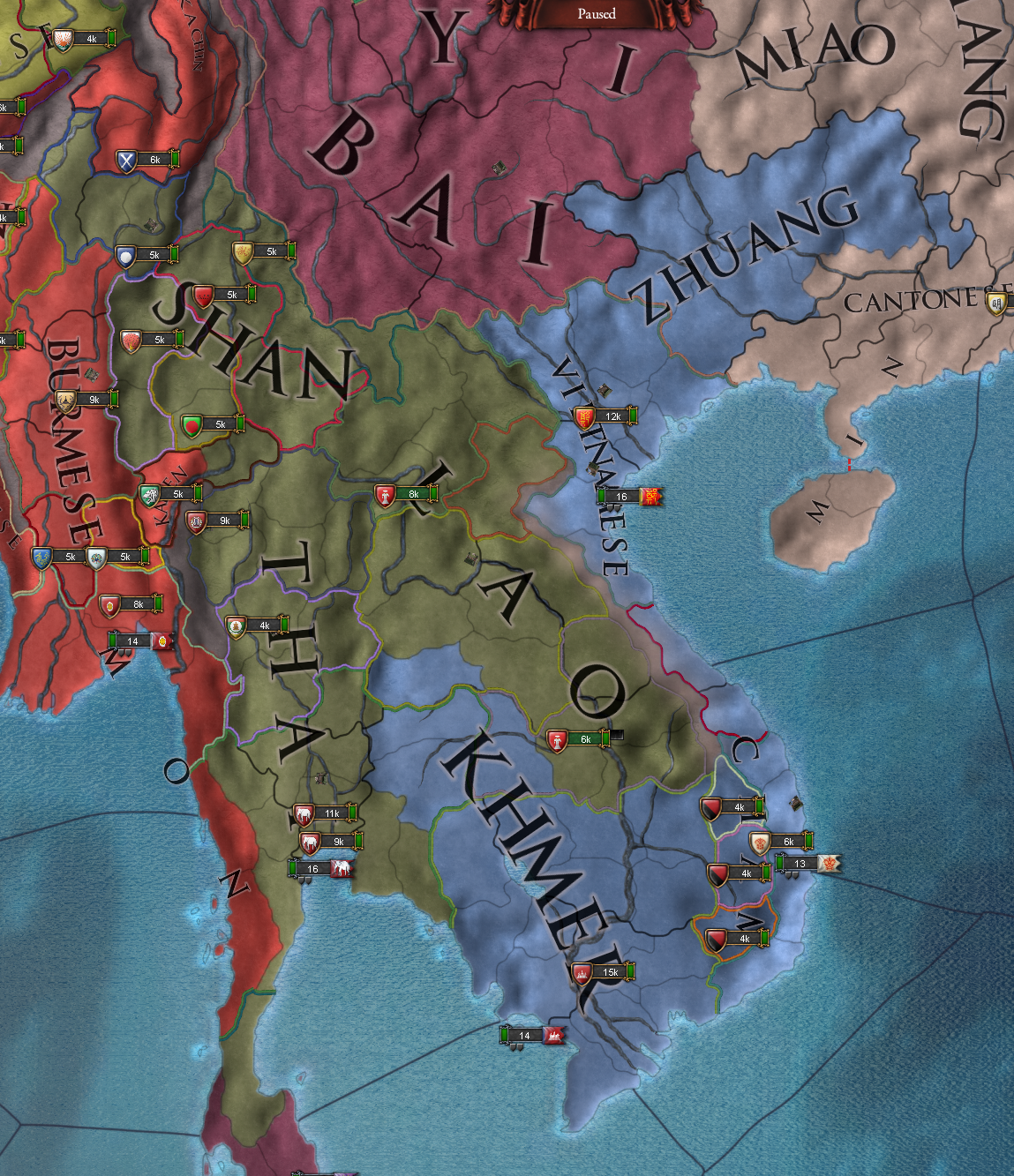 I’ve also taken a look at culture groups in the region. Central Thai and Northern Thai are now simply “Thai”, which belongs to the Siamese culture group that it shares with Lao and Shan. Countries in this culture group are able to form Siam, though Ayutthaya can only do so via its new mission tree. The “Indochinese” culture group is admittedly fairly arbitrary, but does serve to encompass regions of “natural” Vietnamese expansion on their “nam tiến” (southward advance). Cham has been moved to this group to reflect that we no longer equate culture and language. 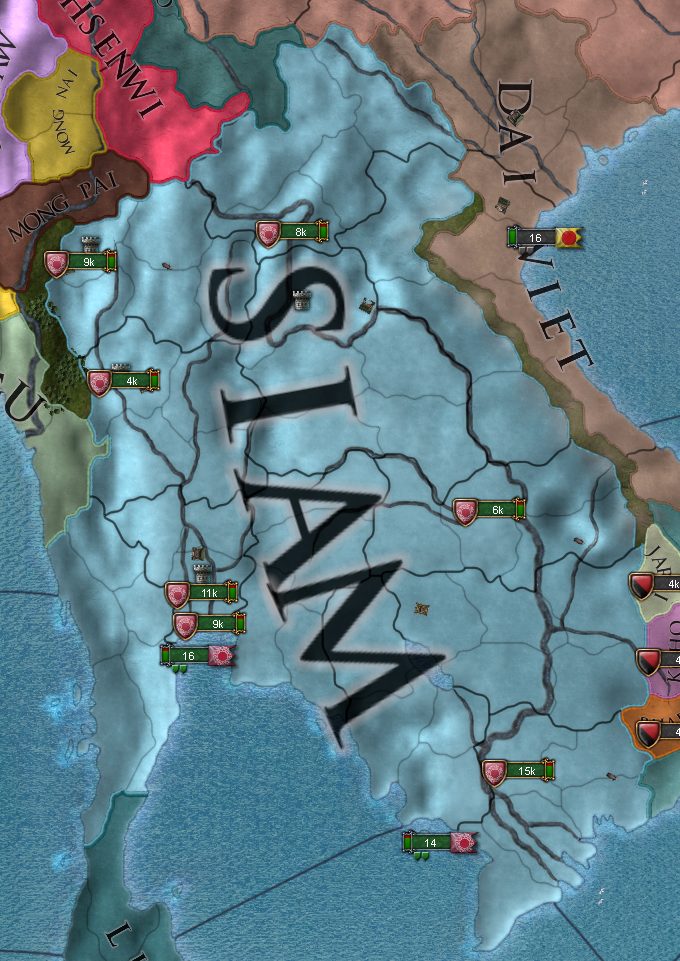 Next week we’ll take a similar look at Maritime SEA - modern Indonesia and Malaysia. In terms of scripted content you can expect plenty of historical events, mission trees, disasters, government reforms, estate privileges, and more from the 1.31 update. We’ll get to these in later weeks, but for now that’s all I have to say. Until next time, have a good week!
Reactions:

Canute VII said:
Any chance you could sneak in some pirates of the south chinese sea? Given that Ming will likely not get an update in a long time and that the pirates organised largely due to events happening in SEA, I could see quite a nice event chain here. Especially if you dare to add some more islands on the chinese coast.
Click to expand...

We've already got the pirates in So and Palembang. I'm always a fan of pirates (I designed the feature after all) but I don't want to overload the world with them.


Ole122 said:
Maybe a stupid question, but seeing how the next DLC/patch/whatever will be SEA-focused, could you elaborate on the geographical width of it? SEA apparently starts at the Burmese border in the west - where are the cutoffs in the other directions? Will we see something for Australia or New Zealand or is this outside the scope?
Click to expand...

There will be content for nations outside of SEA but nothing I can talk about at this time.


AlphatheFirst said:
Will you consider remaking the map of China and adding more provinces and states? I'm from China and is a bit unsatisfied with the current provinces in China. Inconsistent romanization, large chunks of provinces, weird states, etc. If you are planning to make changes to the Chinese map I am always glad to help! There's also a mod on Steam called "The Sun never sets on the Ming Empire" which contains a really good redrawn map for Ming. I believe that the map in that mod is a bit too complex, but I do consider it to be a good direction for a further Chinese update.
Click to expand...

No plans on doing a China map rework any time soon, sorry. I'm aware that there's a lot of room for improvement though.
Toggle signature
Victoria 3 Game Design Lead
Reactions:

neondt said:
None yet but I'd like something to flow into the Siam node to make it less terrible.
Click to expand...

Well, shouldn't the South China node flow there? Wasn't it historically how SEA made money?
Last edited: Jul 7, 2020
Reactions:
A

Hi paradox... Can you adjust the borders of provinces so that they would match up the Rivers? I know it's hard to change the borders for every province on the map. But why not start applying this to newly added provinces?
Reactions:

Thanks for posting dev diaries during the Swedish summer holiday Neondt!
Reactions:
V

Happy to see Dev Diaries back and even happier that content is still being added but I am still disappointed about the lack of communication about the IA debt bug...
Reactions:
S

Can you talk a little about that?:>
Reactions:

A surprise to be sure, but a welcome one
Toggle signature
Dr. Klen'Moral Observations on the effects of isolation on Hive-Minded drones - A Stellaris scientific report

Nice dev diary! I love the more detailed map for the region and the new tags! Are there any plans concerning the AI behavior as the Emperor of China? Right now AI will always make other chinese neighbours tributaries and wont expand as a consequence (even if they have cores/permaclaims), leaving a huge power vacuum when Ming explodes by the 16th century. It would be awesome if new chinese emperors were expansionist instead of passive, and it would make the SEA more interesting to play, as this new emperor would be a real challenge, rather than just a couple of weak chinese tags that dont fight at all.
Reactions:

sanchay said:
Can you talk a little about that?:>
Click to expand...

AlphatheFirst said:
Hi paradox... Can you adjust the borders of provinces so that they would match up the Rivers?
Click to expand...

Where that's genuinely applicable, of course they can.

However, sometimes the correct alignment is for the river to run through the middle of a territorial unit. Paris has straddled the Seine, and Rome the Tiber, for quite some time
Toggle signature
Before you accuse Paradox of selling out with the design of Vicky 3, go listen to track 7 on Tool's Ænima, then reflect.
If you don't want politics in your games, play Tetris.
Ceterum censeo Featured Content banner delenda est.
Reactions:

@neondt Can you at least give a hint - will anyone from the SEA have some colonization focus in their mission trees?
Reactions:

Larva said:
@neondt Can you at least give a hint - will anyone from the SEA have some colonization focus in their mission trees?
Click to expand...

Hi neondt!
The map changes looks really awesome, and Siam has a lovely colour. Looking forward to the patch!

You mentioned that you are considering or are adding content outside of SEA for the update, I wonder if there is any possibility for Australian aboriginal tags? I feel it would be exciting just to have something over there to play as.
Reactions:

Speaking of maritime, will there be, in any chance for the Malay kingdoms to form the historical Sriwijayan empire? Mandala vassal-state thalassocracy empire maybe. They had that as part of mission before, but it was not actually a playable tag, just modifiers though.
Reactions:

Can you add primary tags for the Karen and Kachin cultures? It would be interesting if they could have their own tag when they successfully revolt? The primary tag for Karen culture could be called Kawthoolei.
Reactions:

Are the hill tribes animist?
Reactions:

JKiller96 said:
Are the hill tribes animist?
Click to expand...