Menu
Install the app
You are using an out of date browser. It may not display this or other websites correctly.
You should upgrade or use an alternative browser.
Europa Universalis IV 76271 EUIV: Suggestions 16291 EUIV: Technical Support 5816 EUIV: FAQ & Strategy Guides 194 EUIV: AAR's, Let's Plays, and Fan Fiction EU IV: Alternate History Short Story Contest Contr 26
Previous Dev Diary Next Dev Diary
Show only dev responses

It's Tuesday, and that means it's time for another EU4 dev diary. This week and next I’m going to be showing off some of the new mission trees, events, and national ideas coming in the 1.28 ‘Spain’ update and the accompanying Immersion Pack.

Let’s start with the star of the show, Spain itself:

The Spanish mission tree is available to nations beside Aragon that form Spain, while Castile immediately has access to a reduced version of the tree prior to forming Spain.

For the most part these missions follow Spain’s historical expansion overseas; from the Pillars of Hercules to California and the Philippines, the Spanish Empire was one of the largest the world has ever seen. Driven by the quest for gold and silver, Conquistadors such as Cortez and Pizarro will join your service to lead the conquests of Mexico and Peru. You’ll also be encouraged to spread the word of God in the New World by establishing Holy Orders in your colonies.

Spain will also have opportunities to expand in Europe. If the Iberian Wedding or Burgundian Succession don’t work out for you, permanent claims on Naples and Wallonia will help you seize your rightful inheritance through conquest. With a foothold in the Netherlands, Spain can then pursue powerful Personal Unions with both England (depending on their religious choices) and Austria, with the ultimate goal of establishing a Universal Monarchy.

We’ve also split up the National Idea sets for Castile and Spain, as we did for England and Great Britain in Rule Britannia:


Aragon has an entirely different focus, with a distinct Mare Nostrum theme. An Aragonese player will be encouraged to dominate the Mediterranean both militarily and economically. This mission tree will take Aragon into southern France, Italy, the Maghreb, Egypt, Anatolia, and Greece.

Aragon also has access to several purely economic missions. By establishing trade dominance in the Genoa node and developing the city, Valencia will gain access to the rare Silk trade good as well as a sizable bonus to production of this luxury resource. Completing Aragon’s economic missions will reward the player with the versatile ‘Golden Century’ modifier, giving a 1% reduction to all monarch power costs for 100 years.

Portugal’s mission tree is larger than any other in the game besides Great Britain with Rule Britannia. Like the Spanish mission tree, it is largely concerned with the recreation of Portugal’s historical overseas empire, particularly in Brazil and Asia. Missions have been added for the conquests of Malacca, Oman, Ceylon, and other ports in the East. When Portugal has discovered the Far East they will have the opportunity to negotiate for the purchase of two historically important ports: Macau and Nagasaki. In Brazil the Portuguese player can lead the Bandeirantes in the search for gold in Minas Gerais and acquire an increased chance to discover Gold as a trade good in all of their new colonies.

The times were not always kind to Portugal. In 1807, in the midst of the Napoleonic Wars, the situation became so dire that the Portuguese court abandoned Lisbon, fled to Brazil, and made Rio the new seat of government. This will be represented in the game as a decision available to Portugal should they find themselves in dire straits. Your tag will change to Brazil, and Portugal will be released as a junior partner controlling your remaining European provinces. Note that by doing this you will lose access to Portuguese missions.

Not shown but will be in the final version: taking the decision will also change your primary culture to Brazilian.

Finally we have Navarra. Navarra’s mission tree will be entirely free for anyone playing on the 1.28 ‘Spain’ patch. As you might expect, this mission tree takes the player down a very different path than history intended. Navarra must reclaim its unjustly stolen coastline, and from there pursue an invasion of France that can culminate in a Personal Union. With access to the sea, the New World beckons. In homage to the time-honoured strategy of migrating to the Americas to escape the cutthroat politics of Europe, Navarra will have the opportunity to move their capital to Terranova if they so choose.

Some of you may have noticed that Navarra’s starting monarch is also Aragon’s designated heir in 1444. A new event chain will bring Navarra under a Personal Union with Aragon if Navarra remains independent upon the death of King Afonso. If Navarra is being controlled by a player, they can of course choose to accept this union. But a truly ambitious player can instead reject the union and instantly gain a Restoration CB on Aragon. 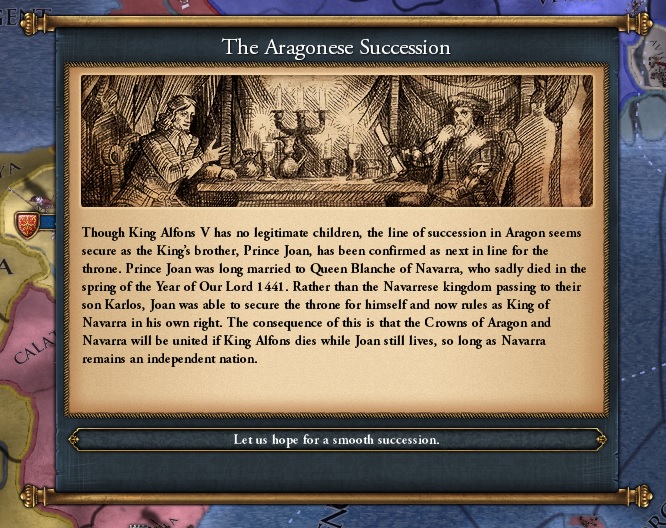 That’s all for today! Next week I’ll be back with more mission trees and national ideas with a focus on North Africa.
Last edited: Nov 6, 2018

neondt said:
national ideas with a focus on North Africa.
Click to expand...

Will Granada get a mission tree as well or will that be shown in another dev diary?
R

Does the decision to flee to Brazil give unique Brazilian missions or just changes the tree to a generic one? (since the tooltip says obtain new missions)
Toggle signature
My suggestions:
Transylvanian culture and reforming tags
Reduce Polish-Hungarian hostilities
Revision of the Végvár system modifier and a Hungarian tradition

What about Granada? They should also get some love

Care to explain what does modifier does? It almost seems like it modifies the pips of artillery.
Toggle signature
Better tall play with a simple solution: new modifier suggestion
Proposal for an Ulm achievement
V

neondt said:
In Brazil the Portuguese player can lead the Bandeirantes in the search for gold in Minas Gerais and acquire an increased chance to discover Gold as a trade good in all of their new colonies.
Click to expand...

Could u explain this a bit? How does it work?Is it en event?Decision?Thanks!
Edit: Its a reward of the mission? Is it limited to Brasil area?Does it have a time limit?
Last edited: Nov 6, 2018

Pretty average, I hope that you have planned something for this immersion pack because at this point I don’t see a reason for even considering a purchase.

I hope that the devs will try and fix what’s broken in the game for once instead of keep adding Flavor.

Most of these mission look pretty similar to what’s already in the game.

So it was. Typo
Toggle signature
EU4 Content Designer

OmarL said:
Will Granada get a mission tree as well or will that be shown in another dev diary?
Click to expand...

Kane_hun said:
Does the decision to flee to Brazil give unique Brazilian missions or just changes the tree to a generic one? (since the tooltip says obtain new missions)
Click to expand...

I am The Law

No naval changes to the most important naval nations in the time that the game covers. GGWP!

Could u explain this a bit? How does it work?Is it en event?Decision?Thanks!
Click to expand...

How does everyone feel about the Spanish national ideas? I am worried that the removal of the +10% heavy ship combat ability idea will make it even more difficult to win a naval war against Great Britain.

neondt said:
In Brazil the Portuguese player can lead the Bandeirantes in the search for gold in Minas Gerais and acquire an increased chance to discover Gold as a trade good in all of their new colonies.
Click to expand...

Is this more like the Siberian Frontier or more like a national decision to increase the chance of gold?

Any chance for dynamic missions/mission trees based on for example monarch traits or political situation?

At least aviable for modding?