Good morning. As was foretold, I am back to talk about our thoughts on overhauling the map of the Balkans for the big end-of-year European update. Once again I’ll begin with a disclaimer that everything here is very much subject to change as we continue to listen to feedback and iterate on our own ideas throughout the year. 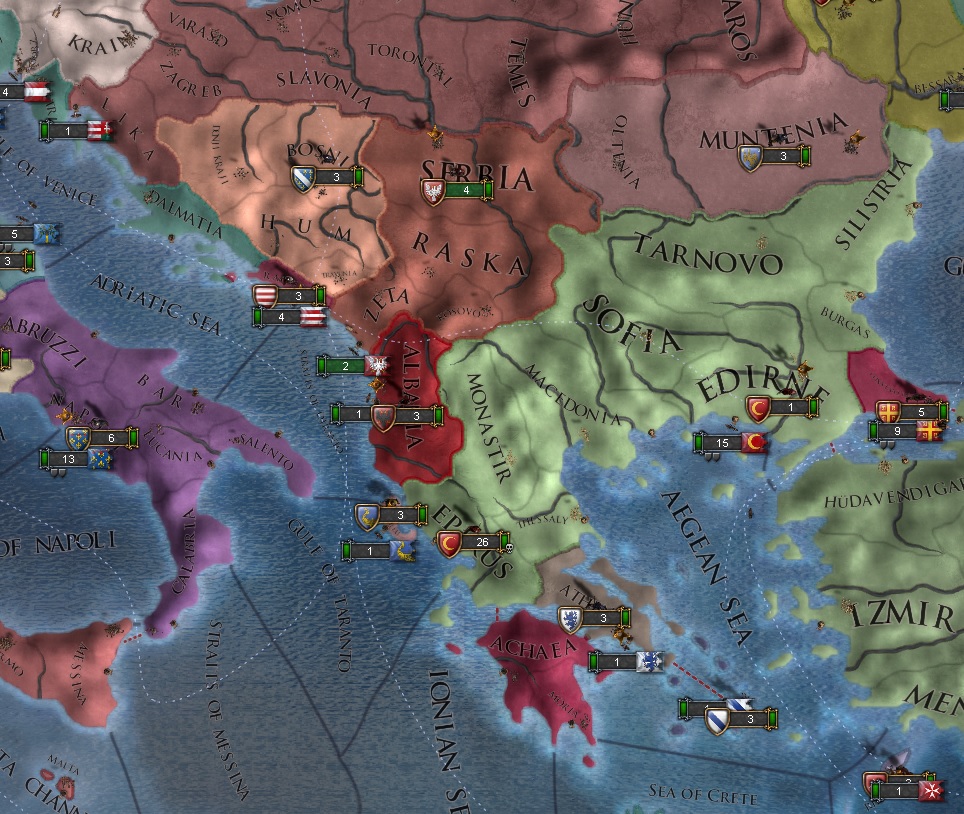 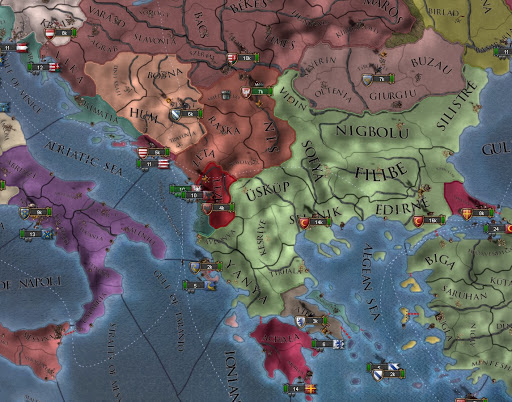 The big change here is simply “more provinces”. Albania has been split up substantially, we have more Aegean Islands, and provinces density in Bulgaria is higher.

There is still, in my opinion, plenty of room for new provinces in Greece and Bulgaria. For the mainland we want to achieve a similar level of density as we see in Anatolia. One of the most obvious things we can do is split the Yanya province by adding Arta, one of the last Epirote cities to fall to the Ottomans. The return of the Epirus tag in 1444 heralds another change: the removal of the Corfu tag, at least in 1444. In the game right now, Corfu is a vassal of Venice and ruled by monarchs who were in fact the independent rulers of the Despotate of Epirus. This will change.

Other possibilities include a province that would more accurately reflect the Ottoman-Moldavian border in Silistria/Basarabia, a further split in the Aegean between Scio and Lesbos, and a separate province centered on the city of Tarnovo in Bulgaria. 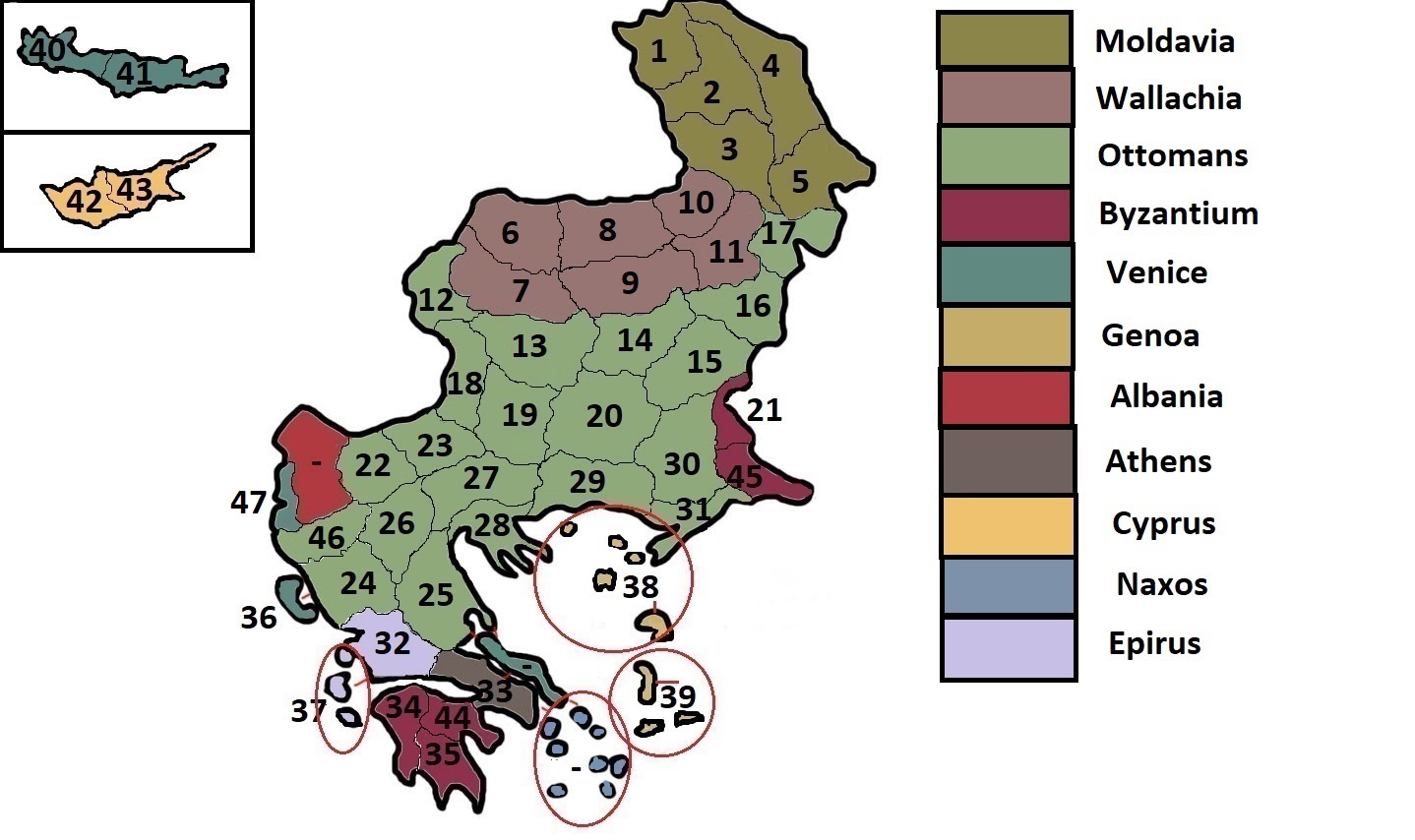 This suggestion by Mingmung, and others very much like it, show a step in the right direction. Beyond what I’ve already mentioned, I like the idea of splitting Cephalonia from the Corfu province to add a little tactical depth to Epirus, as well as the addition of Corinth in the south. We are however unlikely to add extra provinces on Cyprus or Crete: outside of very large islands like Sardinia and Sicily we prefer to keep such places restrained to single provinces.

Moving north-west, there’s a lot that could be done in Serbia, Bosnia, and the Dalmatian coast. There’s room for a few more provinces of course, though not quite so many as we might need further south. 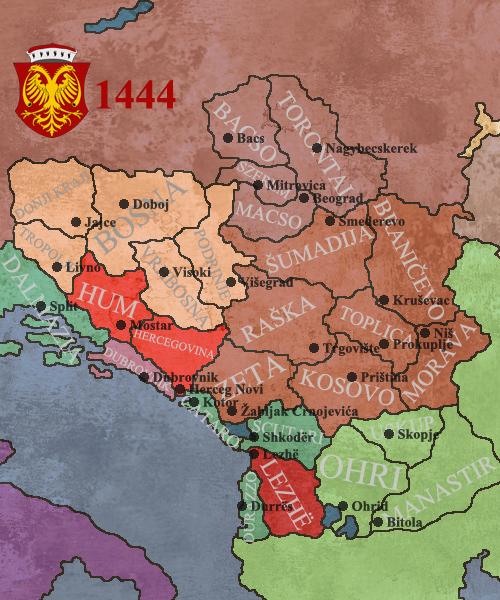 This very aesthetically pleasing suggestion by ootats has a lot going for it. Representing Herzegovina/the Duchy of Saint Sava as a Bosnian vassal in 1444 is an interesting possibility. It also puts the province density on a level similar to that of Hungary, which I feel is a good target to aim for in the region. It is however unlikely that we’ll be adding both the Venetian provinces of Scutari and Cataro.

We’ve been reading your comments on the previous dev diary, and they’ve provoked a lot of discussion on Team Content Design. One of the results of these discussions is that we’re more open to a Como province that would split away from the northern part of what is now Milan. When the time comes for implementation it's certainly something we're willing to try out.

And that's all for today! Next week I invite you to join me on a wild ride through the confusing nightmarish mess that was Early Modern Germany. Until then, I look forward to more of your comments and suggestions.

So how will Core-Fu work?

So Serbia is losing coastline?

Okay, I can get behind this..

Meanwhile returning to Balkans, can we just assure to at least add Alaiye as Karaman's vassal in Anatolia?

@Mingmung s suggestions on Balkans is very fine in my opinion.
My only concern: it is ok to not split Crete, but Cyprus should be splitted and more Aegean islands should be granted province status for sure. To improve naval game's importance, islands should be hard to conquer and easy to defend in my personal opinion.
Toggle signature
Ottomans mission tree suggestions
Details for Anatolia after Cradle of Civilization
Enderun (school for gifted) & Timariot Sipahi for Ottomans
Pirate admirals in Maghrebi working for Ottomans and Pirate nation suggestions
Balkans, Forced population transfers, Ottoman colonization & paramilitaries
Yakut/Saka - proposal for new unique Turkic Siberian tag
Ottoman/Turkish/Anatolian architecture
[HOI4] Turkey suggestions compiled
National idea suggestions for Ramazan & Dulkadir
Siberian tags

Interesting proposals and good to see some more community interaction. However I would disagree with the idea that Crete and Cyprus or at least Cyprus don't need another province, especially because it would serve well to represent the Venetians holding onto the cities on both islands after the fall of the interior. Beyond that, giving the Venetians more provinces, preferably together with Scuatari and Cataro could give them a nice boost. (And hopefully lead to an upping of the province limit for merchant republics.)
Last edited: Jul 3, 2019
Toggle signature
My Suggestions for Improving League Wars: https://forum.paradoxplaza.com/forum/index.php?threads/reworking-league-wars.1058893/

What about adding new wastelands to the Balkans to improve strategic depth? For example Dinaric Alps to separate Dalmatia from Bosnia, Pindhos to separate Epirus from the Ottomans or Silvas Bulgarorum? Also, it would be great if the Carpathians were split into 2 or 3 separate wastelands.

Also, i would like to ask about your thought regarding addition of Croatia as a junior partner in the personal union with Hungary which would be historically accurate.
Last edited: Mar 5, 2019
Toggle signature
Lead Developer - Ante Bellum
• Steam • Wiki • Discord •​

Am I dreaming? Are you really gonna do something about Croatia?

neondt said:
Next week I invite you to join me on a wild ride through the confusing nightmarish mess that was Early Modern Germany.
Click to expand...

Can't wait. Though I'm still in the "Indonesia patch pls" camp, after a bit of research there is simply a lot wrong with the HRE.
Toggle signature
Glorification of the Fit | Mortification of the Unfit

RMS Oceanic said:
So how will Core-Fu work?
Click to expand...

Well, it's still about cores, so I guess it will be the same. Or maybe you'll need to revoke a core in the province of Corfu.

I made it! Nice! @otaats you too, my friend.
Toggle signature
Fighting for a good map since 1444.

neondt said:
And that's all for today! Next week I invite you to join me on a wild ride through the confusing nightmarish mess that was Early Modern Germany. Until then, I look forward to more of your comments and suggestions.
Click to expand...

Also please do something about the Hansa it is utterly boring to play as as things are. It used to be one of the most intresting tags in the game, I get that it was a bit to OP but now days it's way to underpowered it was a real threat to the Kalmar union in reality and a powerful backer of the Teutonic Order, in game it really can't do anything as the collective the Hansa unless someone is stupid enough to attack it. It can't act only react. If you're playing as a Hanseatic city the trade league mechanic is more of a hindrance than a boon.

Seriously the idea that the Haneastic trade League and the italian merchant republics work by the same mechanics is ludicrous, it fails to represent either of them well. And since you do insist on remaking Italy and Germany at the same time move one of them to another system and make both of them closer to what they really were.

Oh and for the love of God the culture now known as Westphalian should be called Low Saxon! (outrage exaggerated for effect) Even Hannoverian (that it used to be) was better than Westphalian.
Last edited: Mar 5, 2019
Toggle signature
Baal: You can't be serious.
O'Neill: Yes I can... I just chose not to.

(northern) Croatia is also in Balkans ^^ Zagreb and Slavonia could maybe be split in half - so extra two provinces there. Technically Hungary gets them at start, i presume you didn't touch it because you changed Hungary in previous patch. This way Croatia would match the level of new Bosnia and Serbia density.

Aside from possible province in Silistria-Basarabia, could Moldavian provinces get re-arrenged as well? In particular to a shape closer to this one:

Toggle signature
We, the People, have Victoria 3!

You know, now that there's an emphasis on it and I really look at it, Greece really does seem small even after the suggested changes. Maybe another split for the province of Athens into two parts, into Boeotia and Attika? Or whatever the Renaissance equivalent names for those regions are?
Toggle signature
​

What about Slovenian culture? Will it be added?