Jump to latest Follow Reply
Menu
Install the app
You are using an out of date browser. It may not display this or other websites correctly.
You should upgrade or use an alternative browser.
Europa Universalis IV 79283 EUIV: Suggestions 17848 EUIV: Technical Support 6375 EUIV: FAQ & Strategy Guides 216 EUIV: AAR's, Let's Plays, and Fan Fiction EU IV: Alternate History Short Story Contest Contr 28
Previous dev diary Next dev diary
Show only dev responses
The holy Swedish month of July is over and our workforce has been steadily trickling back into the office, resigned to the fact that sunlight is a luxury we won't be seeing for another 11 months. With that lovely thought in mind, let's return to our weekly dev diaries and talk about a new feature for our upcoming yet unrevealed expansion for Europa Universalis IV: Coptic Holy Sites.

Copts have had a rough time. Way back in EU's history they were simply represented as the Orthodox faith before getting their own religion within the Christian group, but even then they lacked their own flavour, destined to be left in the Horn of Africa and Armenia with hungry neighbours and their Patriarch being locked up and bullied in Mamluk-held Alexandria.

Well no longer! A feature in the upcoming DLC is a Holy Sites system unique for Coptic nations. Any nation which follows the Coptic faith will have access to a screen showing their Holy Sites. There are 5 in total, detailed with who is currently controlling them and the faith followed by the province. It is the Copts' holy mission to see these restored to Coptic control. 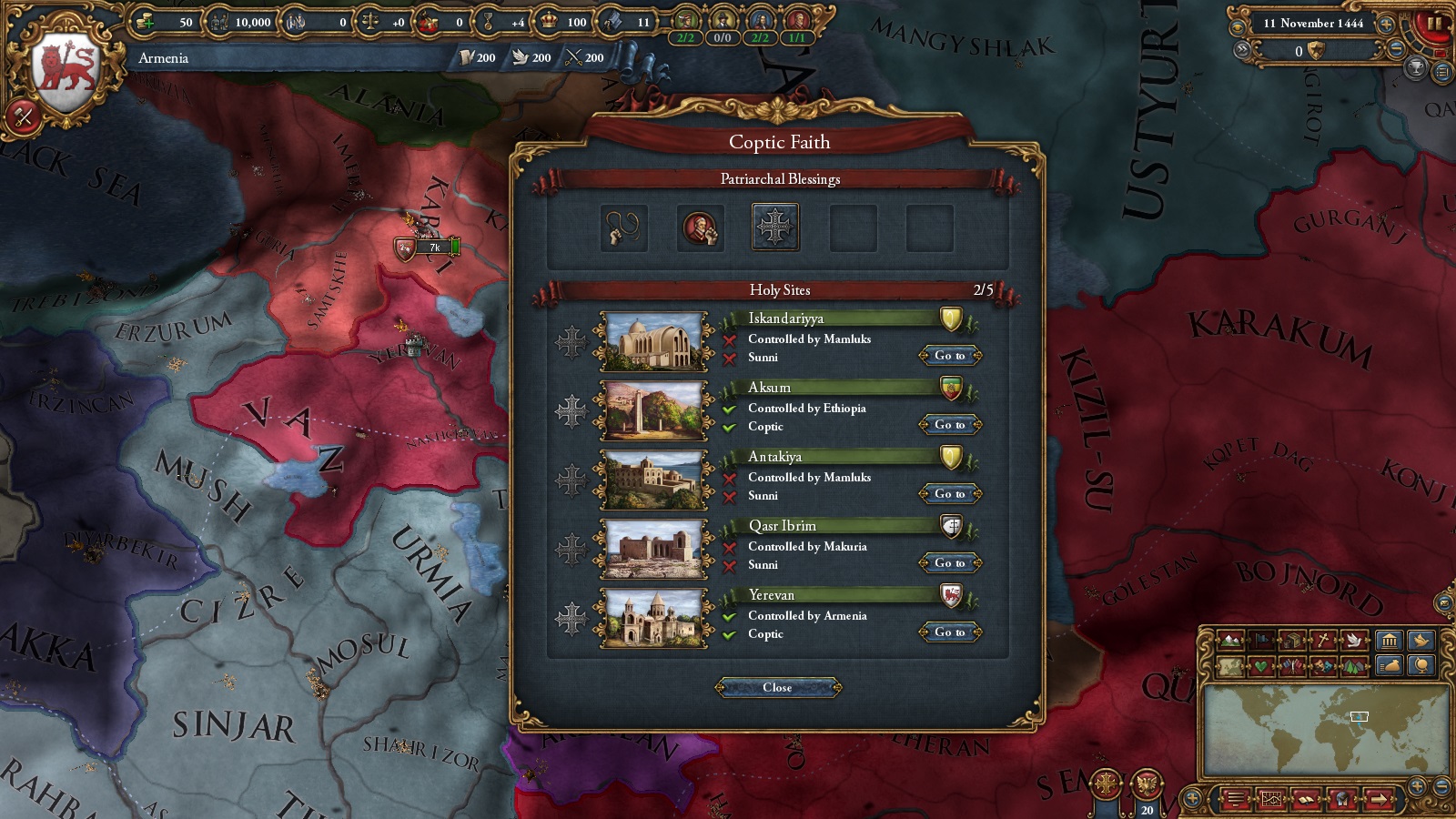 As shown above, Armenia (Who I released&played as from QQ) can open their Coptic menu and see the state of their Holy Sites. If a Holy Site is held by any Coptic nation and the province itself follows the One True Faith™ then all Coptic nations will be granted a blessing from the Patriarch. You are able to pick from the 5 available blessings but be sure that you or your Coptic friends hold onto your possessions tightly, as losing ownership of a Holy Site to a nation of another faith will lose you the blessing until it is returned to Coptic hands.

In 1444 the only Holy site in control of the Copts is Aksum, in the far north of Ethiopia. This will allow all existing Coptic nations to pick one blessing of their choice from the above list.

Unlike other religious mechanics, the Coptic Holy Sites will collectively make all followers of that religion stronger. It makes no difference in the available Blessings if your nation or another Coptic nation holds the Holy Sites. Should the Copts fight back from their perilous position in 1444 and secure their Holy Sites, they will be that much stronger. Co-operate with other Coptic nations and share the Patriarch's blessings

Alongside the Holy sites and Patriarch Blessings, Copts will have a healthy dose of unique flavour events and missions to drive their liberation of the Holy Sites. Coptic Holy Sites will be a paid feature in the upcoming DLC, which will be released alongside the free 1.18 patch.

Next week I'll pass the reins back to Johan, as we return to see what changes have been going on in the Throne Room
Click to expand...

Coptic faith will retain it's current modifiers or are they changed in 1.18?

What no love for the Orthodox?The orthodox faith literally has nothing just a slider....
Toggle signature
Each scar is a victory.
Reactions:

I was playing Ethiopia last time. It fell kind of empty religion wise. Wow. I am sold.
Toggle signature
I was responsible for the 2D Art in Mesoamerica Universalis
https://forum.paradoxplaza.com/forum/index.php?threads/mod-mesoamerica-universalis.970935/
http://steamcommunity.com/sharedfiles/filedetails/?id=861977085​
Reactions:

EldarPanic said:
What no love for the Orthodox?The orthodox faith literally has nothing just a slider....
Click to expand...

A lot of events and a slider*

Also Orthodox slider is vanilla afaik so free rework if they would decide to to this.

There are many faiths in europa without ANY cool things. The animist, fetishist, sikh, Totemist, Shinto Confucian etc.
Toggle signature
I was responsible for the 2D Art in Mesoamerica Universalis
https://forum.paradoxplaza.com/forum/index.php?threads/mod-mesoamerica-universalis.970935/
http://steamcommunity.com/sharedfiles/filedetails/?id=861977085​
Reactions:

DDRJake said:
Copts have had a rough time. Way back in EU's history they were simply represented as the Orthodox faith before getting their own religion within the Christian group, but even then they lacked their own flavour, destined to be left in the Horn of Africa and Armenia with hungry neighbours and their Patriarch being locked up and bullied in Mamluk-held Alexandria.
Click to expand...

Finally Coptic gets some love! I would love if orthodox would get some too... they are a big religion but have only a slider with like 5 events to increase/decrease PA
Toggle signature
Ships sail on water,m'lord.

Well, It looks cool but It looks so simple. I wish we get more options.
Reactions:

What about Holy Sites for other religions? Will they be added in EU4 like in CK2?

Zwireq said:
Coptic faith will retain it's current modifiers or are they changed in 1.18?
Click to expand...


Chimerae said:
Looking good Jake! Will go for the Prester John in 1.18
Click to expand...


Gaussia said:
If all five holy sites are controlled by copts, will all coptic nations be able to choose all five blessings?
Click to expand...

I can't but feel that the Orthodox should also have this feature (though maybe with smaller blessings). I'm pretty sure they'd be as happy as these Copts if they saved the Pentarchy.
Toggle signature
Nationality: Croat
Religion: Roman Catholicism
Ideology: Rightist
Last Megacampaign: CK2 -> EU4 -> Vic2 - Crusader Panonians
Last EU4 playthroughs: France, Commonwealth
GENERATION 40: The first time you see this, copy it into your sig on any forum and add 1 to the generation. Social experiment.
Reactions:
I

Can't change the modifier after selecting one? Will any Coptic country be added?

Nice!
Toggle signature
Someone remind me to do an AAR of me playing as celts and such in the English Isles for CK2 where I fight the invading cultures! Or however that went historically

Will all blessings be possible to choose even if you only have one blessing at your disposal? Can the blessings be changed? For instance if I picked the missionary boost, and then I convert all my provinces to coptic, and I'd like another blessing, can I then change it after a while or is it just locked? If the holy site is lost, will my blessing still be linked to that particular site? Will every coptic choose their own blessings, or does the site's holder do that?
Toggle signature
Finally Sweden are out of the World Cup! Even more boring than Denmark.

Nikolaus Kopernikus was German, NOT Polish.

EldarPanic said:
What no love for the Orthodox?The orthodox faith literally has nothing just a slider....
Click to expand...

. . . they just gave some love to a religion that has less than a slider.
Last edited: Aug 4, 2016
Toggle signature
​
Reactions:

Good to have some more flavour!
Toggle signature
User Mod Index: the CK2 User Modification Index for mods, utilities and guides. Post in it to add your new mods or updates.
When the World Stopped Making Sense: developer for this CK2 dynamic & historical Migrational Era mod 476-600 (+) mod created by Enlil - 0.9.13!
Emendatio Historiae Imperatoris: developer for this Imperator: Rome historical and flavour mod.