Good day all, today is a very exciting Tuesday, as we'll be coming to the conclusion of our EU4 Dev Clash Multiplayer Campaign, complete with trophies and congratulations to the winners and commiserations to those who did not make it to the Top 3. We'll be live over at our twitch page at the usual time of 1500 CEST.

Until then though, let's cover a few more changes we have in store in the upcoming Persia Update and it's accompanying expansion. Last week we covered changes over in Persia, so today let's look over towards Anatolia.

Firstly, let's talk the Ottoman Government. This recently introduced government type is a strong boon to the Ottoman nation, but as of the Persia Update it will be attainable for other nations too via the decision to Restore the Sultanate of Rûm. 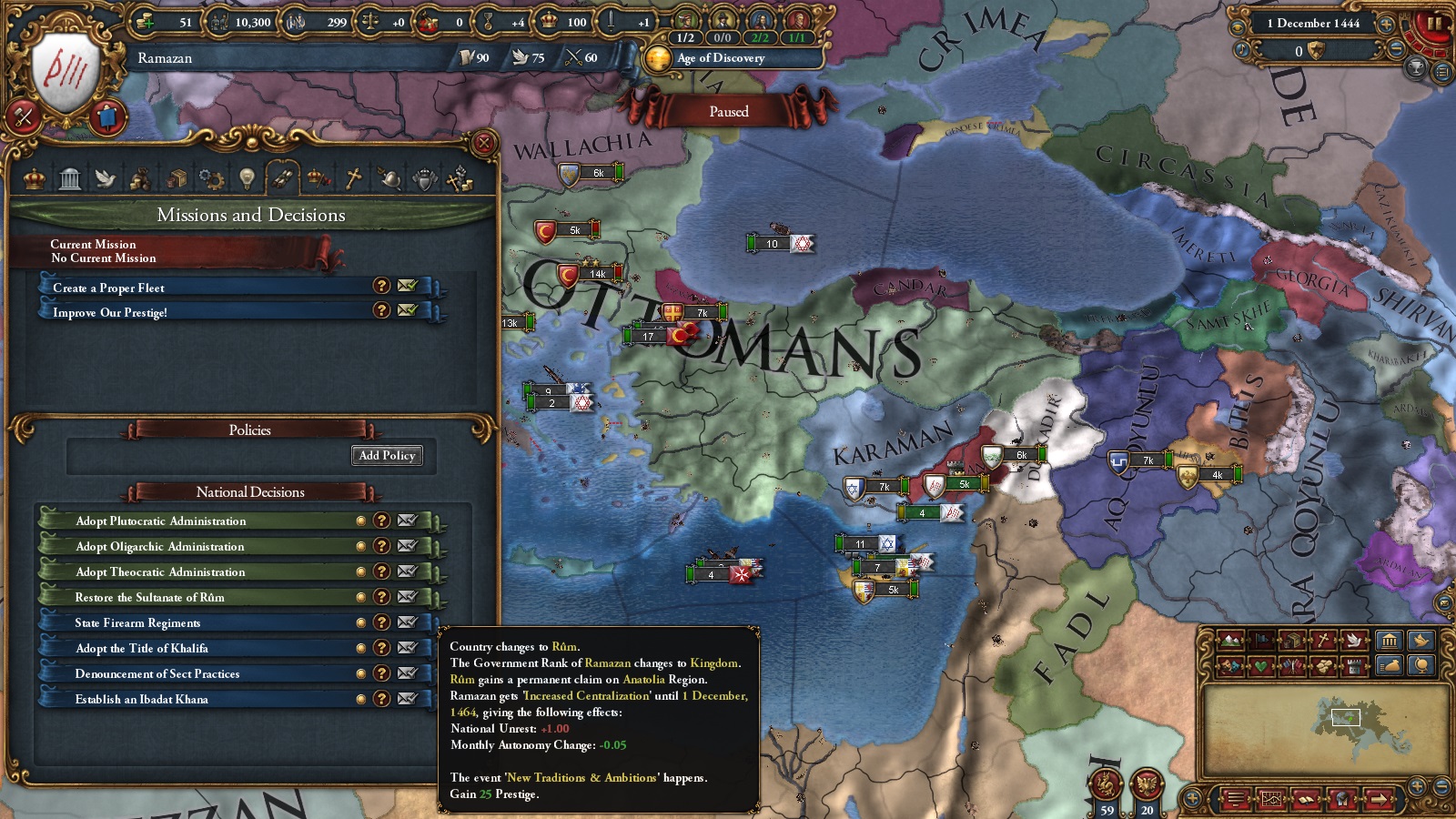 Any ambitious Turkish nation can, after wiping tactfully removing Ottomans and Byzantium from the map, take the decision to form Rûm. The requirements will also ask that they hold key provinces in the region. This will grant their nation a new name, flag, colour and National Ideas for their Sultanate of Rûm. 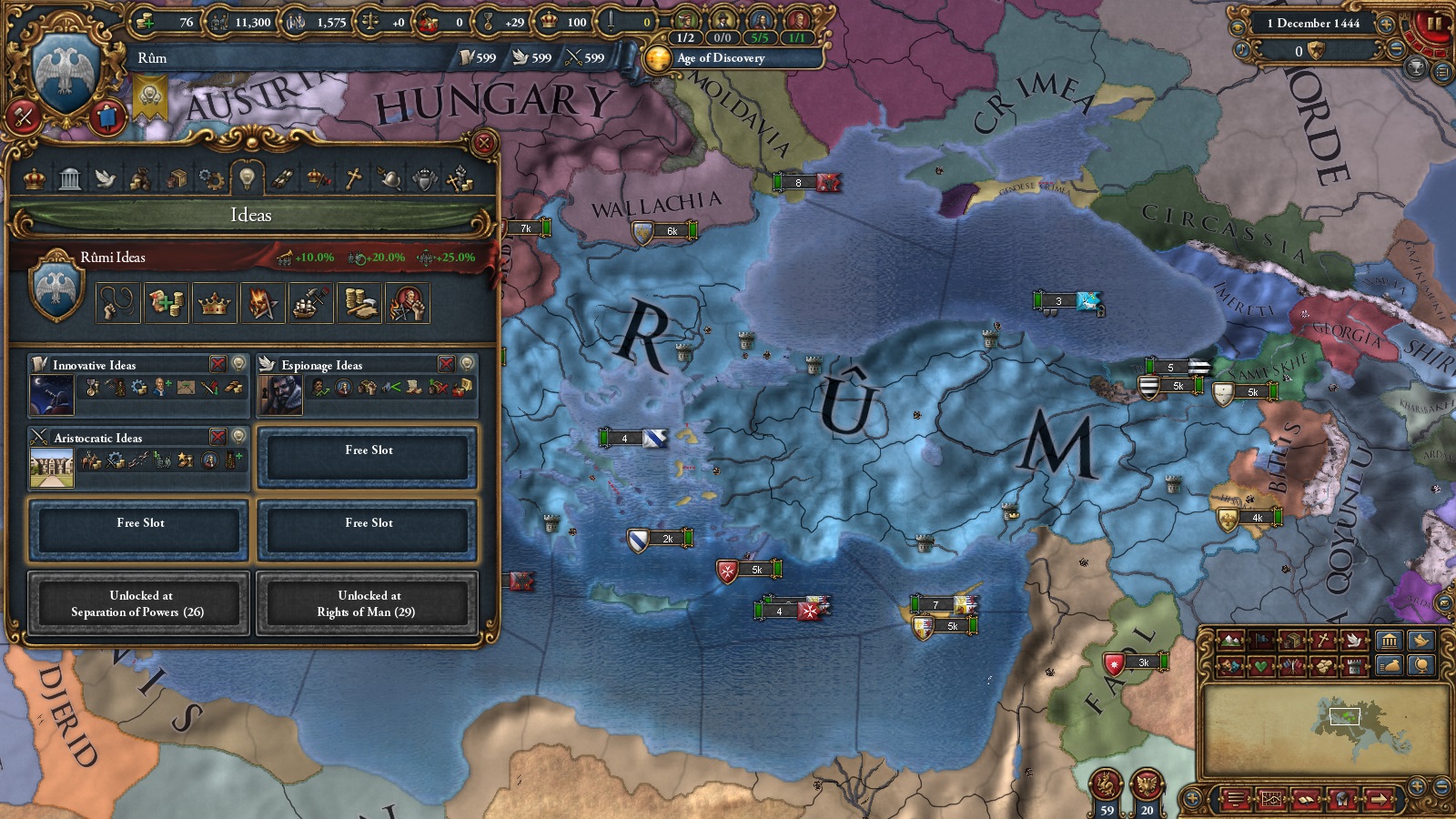 rum_abul_fath = {
discipline = 0.05
}
"We have enemies in all directions making a strong army is a necessity for a state such as ours. Fortunately we are not a weak people. From the irregular Gazis and the Akinci raiders to the Sipahis of the Ottoman Empire the world have come to know the military might of the Turkish people. Let us build an army for an Empire, taking inspiration from wherever military competence can be found while also drawing from the strengths and experiences of those that came before us."

rum_king_of_the_east_and_west = {
core_creation = -0.20
num_accepted_cultures = 1
}
"Since the fall of Rûm the Turkish people have been divided, serving minor beys from the bosphorus to the mountains of Kurdistan. It was our duty to restore the legacy of the Seljuk Sultans of Rûm and unite the Anatolian Turks. Our ambition however must be much higher than that. The Seljuk Turks once ruled one of the greatest empires known to man, it is evident to anyone who sees our empire that the restoration of this state is now our destiny, as is the reclamation of the Roman lands that were once ruled from what is now our heartland."

rum_shahanshah = {
legitimacy = 1
}
"Rûm was not only an Anatolian state but also one that strongly honored the Persian traditions of kingship. Especially as Persia itself fell to Mongol conquerors. Under the sultans before us Persianate culture blossomed and Persian poets and scholars found patronage. Men such as Najm-al-Din Razi, Qane'i Tusi, Baha'-al-Din Walad and Rumi himself made their homes under Rûm’s protection and the Sultans themselves were versed in Persian literature and poetry.\nWe must cherish our Persian legacy as well as our Turkish and aspire to make our homeland a paragon of Persianate culture, the foremost of Islamic nations."

rum_sultan_of_rum = {
tolerance_heathen = 3
}
"The Sultans of Rûm ruled over the people of Anatolia, Muslims and Christians. It was during their reign that Islam became the dominant religion in the region but their policies accepted all subjects. Often inviting even Christians from the nearby lands to seek out the domain of Rûm. We would do well to learn from their example."

rum_sulan_al_bahrayn = {
naval_maintenance_modifier = -0.15
}
"Like the Rûm sultans of the past we must establish a strong and durable navy that can withstand both Christian pirates and the fleets of other Muslims. The ability to control and expand over the Mediterranean and protect our coastlines is going to be one of the main challenges of our Empire."

rum_sultan_al_muazzam = {
build_cost = -0.15
}
"The greatest of Sultans require grand monuments and buildings. Let us make the lands of Rûm the envy of the Islamic world, with mosques, madrasas, caravanserai, gardens, canals and palaces unlike any other. Through architectural patronage we can create an enduring and unique legacy for our dynasty."

rum_protector_of_dar_al_islam = {
global_heretic_missionary_strength = 0.03
}
"Our predecessors were always ready to defend the righteous and to combat the spread of heretical sects. So too must we do our utmost to promote the pure forms of religious worship and limit the the influence of heretical rulers who would otherwise try to seduce and mislead the faithful."
}
Click to expand...

So with Ottoman Government attainable, we also have some new toys for them to play with.

As part of the accompanying expansion, the Ottoman Government will have access to Pashas and Janissaries

Firstly Pashas. In States, a nation with Ottoman Government can assign a Pasha. This will reduce unrest and the State maintenance cost for those provinces while also raising the cost of new buildings and units from them. This will prove useful in keeping costs and revolts down in provinces far from the capital, however revoking a Pasha will result in increased unrest for 10 years. 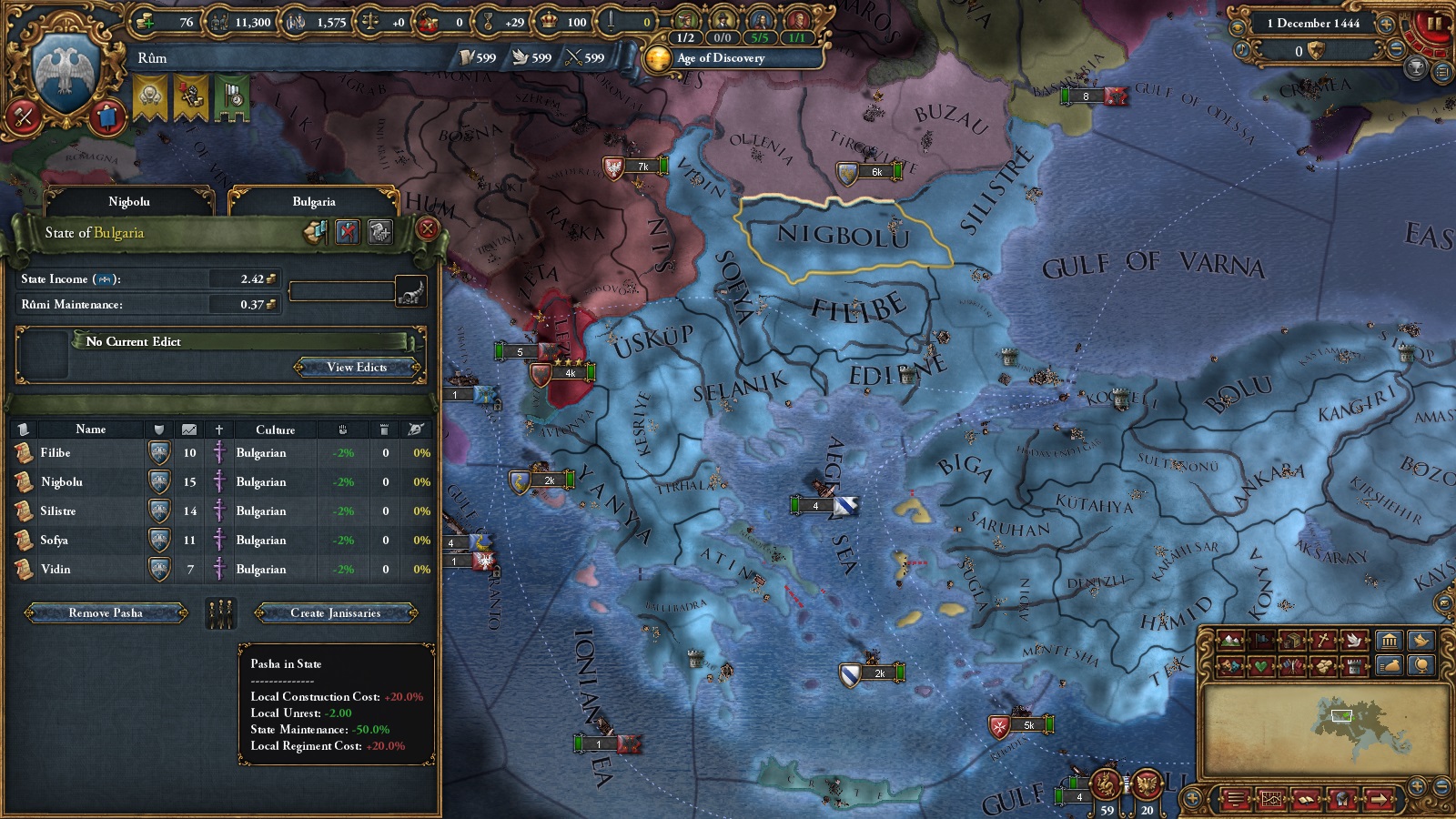 Janissaries on the other hand, have seen some changes. No longer a countrywide boon for all units, the Janissaries are now special elite units. These can be recruited for a set cost of 50MIL from a given state. For every 10 development of heathen-faith land in a state, 1 Janissary unit will be spawned, making high-development concentrations of wrong-religion land desirable . These special units cost twice as much to reinforce but are able to withstand damage much better, taking 10% less shock and fire damage in battle. Similarly, the Janissary Decadence disaster has been altered, now to fire if a nation relies too heavily on Janissaries relative to their forcelimit.

You know I think it's not fair that we look so much at the Ottomans. For the upcoming Persia Update, it's actually the Mamluks who start in 1444 with higher development between the two. We'll take a look at what we have in store for them but that'll have to wait for next week, as there are trophies to polish for now.

See you next week!

Thanks for the DD. How will this affect the Rum achievement?

Can the Pasha be forcefully added to a province via script (modding support)? Also, does the 'Assign Pasha' button support Trigger conditions?

Could be the basis for a provincial system, especially if the modifier added by the Assign Pasha button was configurable per-state. Looks like a nice feature either way, also good to see Janissaries as an elite unit.
Toggle signature
M&T v3.0: Path to Modernity
Team Member of M&T
(EU4) Land reform, provinces, assemblies, succession, citizenship and slavery for M&T

Suggestions
(EU4) Distance based Autonomy and Unrest, or Rebalancing Conquest and Expansion
(EU4) Scaled modifiers for Improved Moddability - Tick Agree if you support this ​
H

might actually go too far on the Ottomans. Their NIs aren't particularly out standing that without the Janissary buff their military is actually going to be quite weak in comparison to their neighbors.

Cheers for the DD DDR Jake . More quality additions . Those Rûm national ideas look pretty handy - they give someone else trying to take the crown something to play for. With more unique units popping up, making Janissaries an actual unit makes a lot of sense as well. I'm no expert on the history of the period of the area, but the gameplay implementation sounds interesting at the very least.
Toggle signature
If interested, please vote for better surfacing of information in HoI4 in this suggestion thread

The Janissaries rework as elite units sounds pretty interesting. Is there a limit on how often they can be raised from a single state? Pashas look useful. The whole Rûm formable seems like it'll only ever be seen by a few elite players specifically going for it, but I guess it's cool?
Toggle signature
Some suggestions for EU IV:
Some suggestions for flavor and mechanics for Totemism and Animism.
Some UI improvements for condottieri.
A Suggestion for Stellaris:
Art, Culture, and Prestige: A New Peaceful Victory Type

Oh god no. The local recruitment cost is back. Hello we'll see the variable maintance cost of each units back.
F

This new nation would be perfect to try to Unify Islam with, if this decision was attainable with heathens inside of the country. Please fix Unify Islam


*edit: To me it would make more sense not to allow heretics instead of heathens. After all, the schism between Ibadi/Sunni/Shia is what is needed to overcome in order to unify the faith (!?). Killing all heathens is something different.

finally.
How many developer diaries are there left?

Thank you for fixing janissaries! Hope Mamluks will be a worthy opponent for Ottomans, especially in MP
Toggle signature
Ukrainian Lands at the 16-18th Centuries Maps
[EU4] Multiplayer Rebalance Mod (MPR by ZP) [SteamWorkshop] - a mod designed for MP fans by an MP fan

The Pasha mechanic for states gives me hope for a "general" state governor mechanic in the future to impact the much debated blobbing tendency by having a limit to how many states a nation can rule over before having to assign governors.
Ruler personalities would tie in well into that(making governors a varied bunch), and give some less tedious "tall" gameplay mechanics.
Higher local level governance is something that's missing from the game and would fit nicely between provinces and vassals.

Suggestions galore:
Minorities as an Estate

might actually go too far on the Ottomans. Their NIs aren't particularly out standing that without the Janissary buff their military is actually going to be quite weak in comparison to their neighbors.
Click to expand...

They still do pretty well in hands off games. Here's a recent one I did: 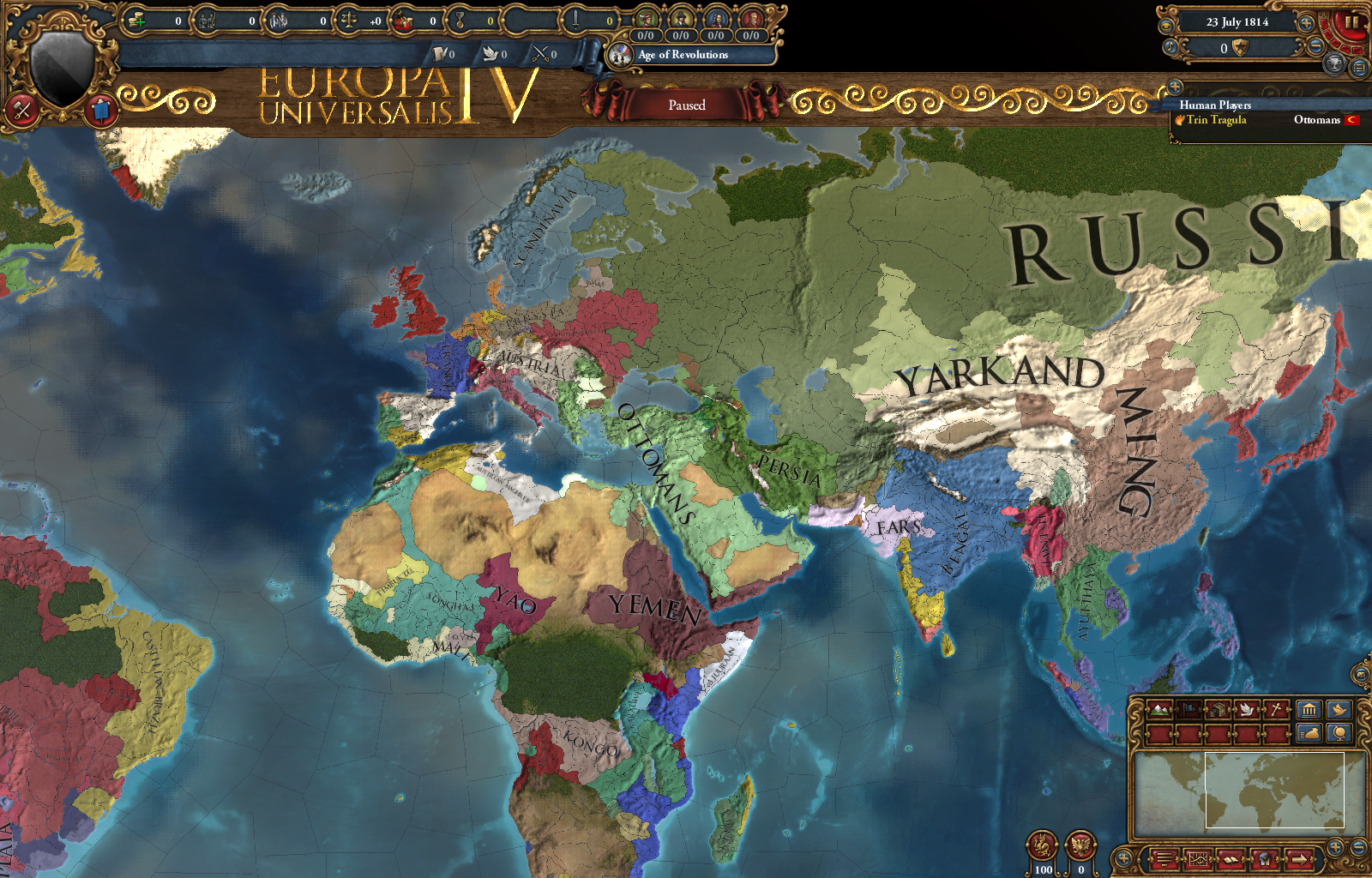 Mind the Mamluks do have a lot more teeth than the used to all the same
Toggle signature
No fighting in here! This is the war room!

Trin Tragula said:
They still do pretty well in hands off games. Here's a recent one I did:
View attachment 303905

Mind the Mamluks do have a lot more teeth than the used to all the same
Click to expand...

I'm rather pleased to see that your Persian mechanics seem to have worked pretty well in that observer game. Also, great to see a viable Netherlands and Prussia without human interference.

DDRJake said:
For every 10 development of heathen-faith land in a state, 1 Janissary unit will be spawned, making high-development concentrations of wrong-religion land desirable
Click to expand...

Is there a limit to that? Once Janissaries were raised in a state, the action cannot be repeated unless development increased or those units die? Or you can spam 50 MIL keeping in mind the ratio between regular & Janissaries? Is Janissary decadence still late 17th c. event, or you can be in trouble if you rely on them too much even in 15th c.?

You mentioned increased reinforcement cost, how about upkeep?

I hope Mamluks will have a special government type, maybe shared with the janissaries when they take over Turkey.
T

Also, third rome Russia should be renamed to Vodka empire for consistent jokes

Well worth waking up at seven in the morning to read.

Nice to see that Janissaries are finally their own unit rather than a uniform buff to the Ottos. Also, has a name been chosen for the new expansion? It's a bit unusual that it seems to be this late into it's dev cycle with no name given.

(Still disappointed at the seeming lack of Turkish culture changes.)
Toggle signature
"The more I studied that record, the more convinced I became that the job of the historian is not to pass judgment, but to try to understand." - Ludwell H. Johnson

might actually go too far on the Ottomans. Their NIs aren't particularly out standing that without the Janissary buff their military is actually going to be quite weak in comparison to their neighbors.
Click to expand...

I'm sure they'll eventually overcome all their neighbours and conquer 1/3 od the world like they always did.
Toggle signature
My suggestions about 1066 and 867 Iberia (Crusader Kings 3)