Good morning all. It's Tuesday and that means time for another Dev Diary. As I mentioned in the last non-alcoholic dev diary, we're going to start looking at changes and features coming with the 1.26 and its accompanying, unannounced expansion.

Before that though, we are currently looking to iron out the kinks with the open beta 1.25.1 hotfix (AI allies deciding that money is more important than friendship and nations sometimes failing to explore for a long time). These fixes will be made, applied to the open beta and rolled out in due time.


Governments​
The way governments work have remained mostly unchanged for the duration of Europa Universalis IV, still being almost entirely lifted from EU3. While we have added new government types and their own mechanics such as Theocracy devotion, Steppe Nomads and American Natives, the government progression has remained quite stale, where tech sometimes unlocks a new tier within your government tier and you will switch to it at a cost of 100 ADM if you want its better effects, different election times, absolutism etc.

As a feature in 1.26's accompanying expansion this goes out the window and instead we introduce the system of Government Reforms where you will hand-craft your own government through a series of reforms as the game progresses.

The start of any great project starts with burning a few things down, so to set things straight:

The differences we had between government types, for example between Administrative Republic and Oligarchic Republic, or Steppe Nomad and Tribal Despotism, will now be modeled through the reforms

Each Government has a starting reform and maximum number of reforms available. When a Reform value ticks up to a required value, a Governmental reform can be made granting a choice of modifiers and effects and advancing Government reform by 1 step. Each bonus gets incrementally more expensive to increase.

Each reform costs 100 Government Reform Progress, plus 50 for each additional reform. Each nation gains +10 Government Reform Progress towards reform per year, multiplied by 1-(its average autonomy across all provinces. As ever, the numbers we talk about today are subject to balancing and can and likely will change by release, but the net effect is that nations who crack down on autonomy are going to have a far easier time passing their government reforms.

We will cover all the different types of governments over the course of a few dev diaries, but today we will focus on the reforms for a Monarchy.

"What about unique government types?"

The game is host to various different unique government types, with their own effects or mechanics. some examples:


These special tools will now be modeled by unique reforms. In most cases, it will be a special reform on the first level (Feudalism vs Autocracy) ready-unlocked for said countries. We will also be making the system more flexible in that if you fulfill the criteria for having a certain government type, but previously had no way of switching into it, you will be able to change your reform to pick it up. Changing reforms that have already been passed comes at a cost (currently 10 corruption)

This system is still Work in Progress, so expect changes along the way. Here's a screenshot of it in-game at this current time: 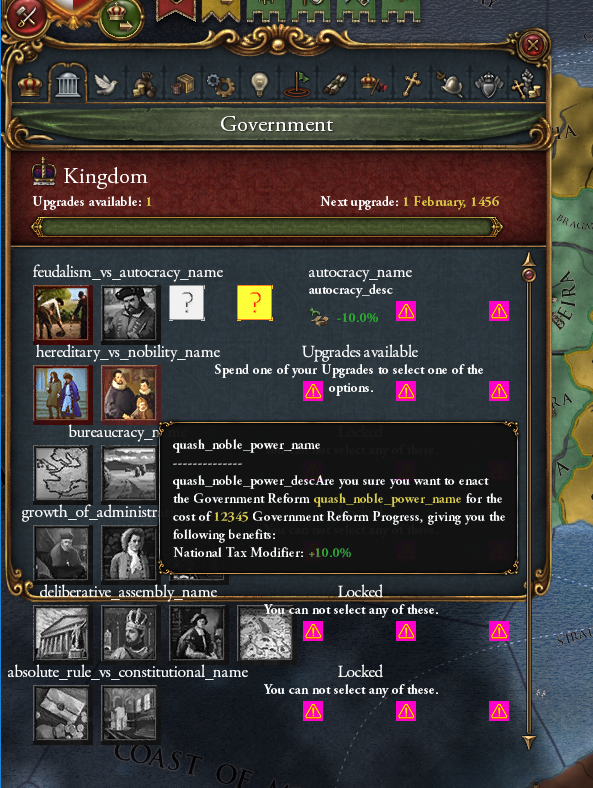 Return of the pink coder-art and overflowing GUI. Games are like sausages, beware of seeing them made.

Next week we will have more information about this feature as well as looking at another reform path. Which shall we look at, Republics, Theocracies or Tribals? See you next week for it!
Last edited: Apr 3, 2018

So Tsardom and Russian Principalities are going to be deleted and Muscovy will have -1 dip point per month from the start?
Toggle signature
https://forum.paradoxplaza.com/forum/index.php?threads/streltsy-disasters.1104950/ - my suggestion of unique disaster for Russia and nations with primary culture of East Slavic culture group

Looks interesting, though
Toggle signature
https://forum.paradoxplaza.com/forum/index.php?threads/streltsy-disasters.1104950/ - my suggestion of unique disaster for Russia and nations with primary culture of East Slavic culture group

https://forum.paradoxplaza.com/foru...sison-of-threatening-of-war-mechanic.1068550/ - my suggestion to improve of diplomacy actions from The Cossacks DLC
S

Hmm...I see Iberia in the background, is that a hidden clue perhaps where the next DLC will be located?

Also, will there be differences depending on the government ranks? Like a diffenence between if you are a duchy or empire as a monarchy?
Toggle signature
Iceland for Holy Roman Emperor!

Lowlands are just Another word for Netherlands!
H

Looks...interesting? I'm now worried over where my favourite Ambrosian republic and Tsardoms will go (hopefully the reforms will be able to model it).

Nice, I hope you will use this opportunity to rework/change some old government mechanics such as Parliaments or Elective Monarchy!

Will the way Parliaments and factions be reworked in this?

Slightly worried this might kill some of the flavour with all the recently added unique governments to be honest, but it has great potential.

i am conflicted here...
i like dynamic governments,
but i dont want anymore god-forsaken sliders

I'm changing this, the parliament mechanic must see an update too. Although the PDX policy of not really tinkering with DLC aspects is understandable - surely if the change is a significant improvent to the mechanic - it is worth doing?
R

"+5% base loyalty of Nobility" without anything like "if the Cossack DLC is enabled" unlike the following part about parliament and Common Sense.

Could this mean that Estates are made into vanilla?

Does it mean we will now be able to get rid of elective monarchy through reforms like what was attempted in history (Constitution of 3 May) and not by defeating a giant revolt that appears out of nowhere when you enter the 1600s?
Last edited: Apr 4, 2018
Toggle signature
"Diacritics are important!" - a person obsessed with diacritics

How moddable will the feature be?
Will there be a hard maximum of categories and options per category?
Will there be moddable side effects of passing a reform, i.e. additional unrest etc?

Please, Paradox, I hope you will tie it government types more with the estates and idea groups. Missions reform was the first great step in making game better, really want you to go that way with the govs and estates.
Last edited: Apr 3, 2018
Toggle signature
https://forum.paradoxplaza.com/forum/index.php?threads/streltsy-disasters.1104950/ - my suggestion of unique disaster for Russia and nations with primary culture of East Slavic culture group

This seems verrrry good
Toggle signature
I play Paradox games on youtube, check me out here if you like: Lord Lambert​

I need to see what has happened to hordes