Hello and welcome back to another huge dev diary! Today we’ll talk about two new features, a small one and a big one. We then end the diary with two changes to balance. Also as usual, large warning on that all of this is work in progress and might not match the final product!

First up is a small little feature based on the Portuguese Marines and them attacking forts along the coast of Africa and India. Naval Barrage is the same as Artillery Barrage but it requires the cannons of your ships instead of field artillery. It goes by amount of cannons on the coast / 100 to the fort level to determine if you can break open it’s walls. It will cost 50 military points just like the normal Artillery Barrage. 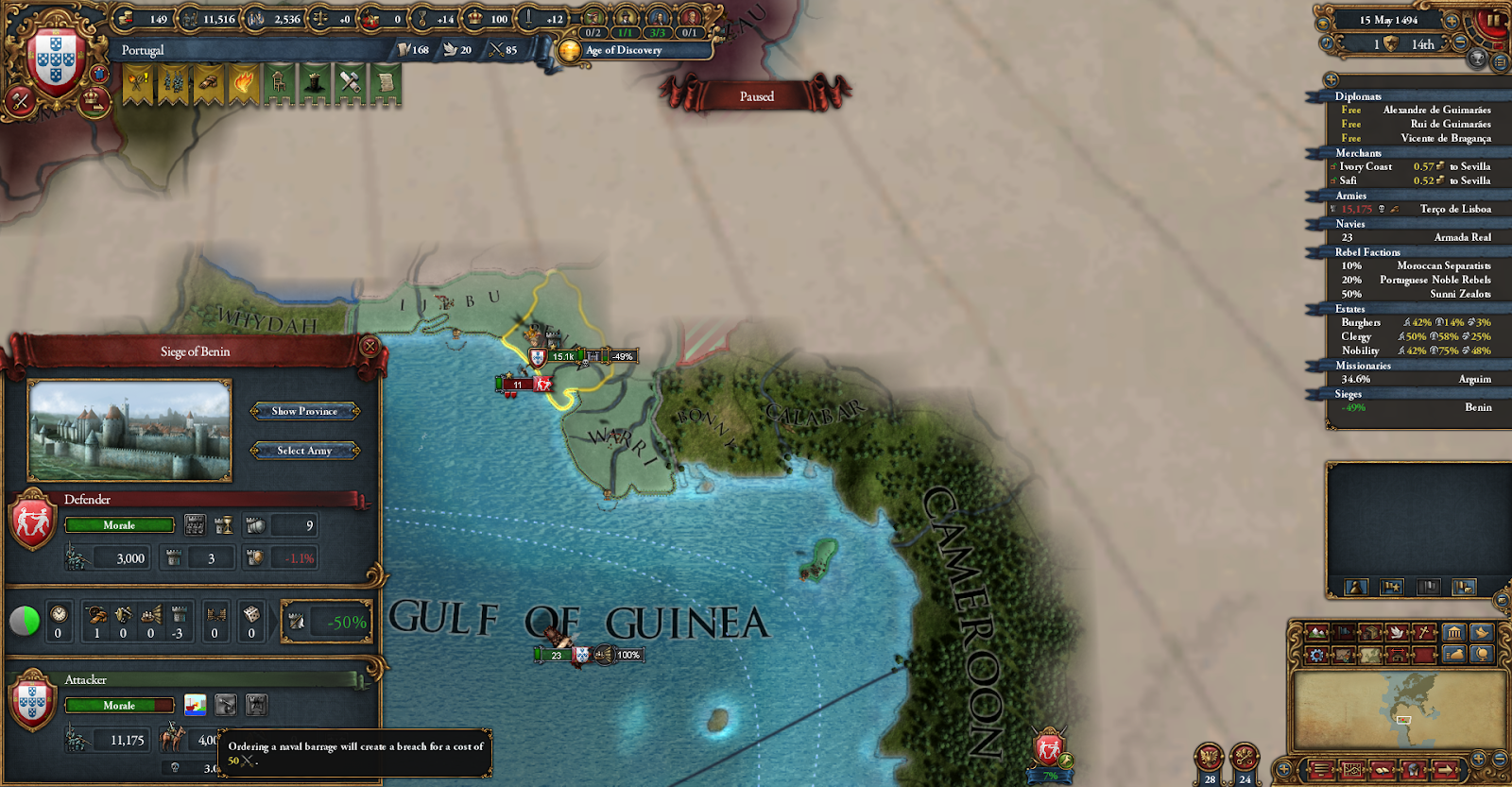 The Portuguese also gets a small bonus by a change we’ll describe in the next feature for the dev diary.


The big feature of today is Flagships. A more bombastic and expensive ship as the pride of your navy. It houses the commanding officers of the fleet who plan the engagement and mission the ships take part in. They are unlocked to any nation that fields a navy of 3 000 sailors, or 15 heavies worth, and it costs 100 ducats to build. 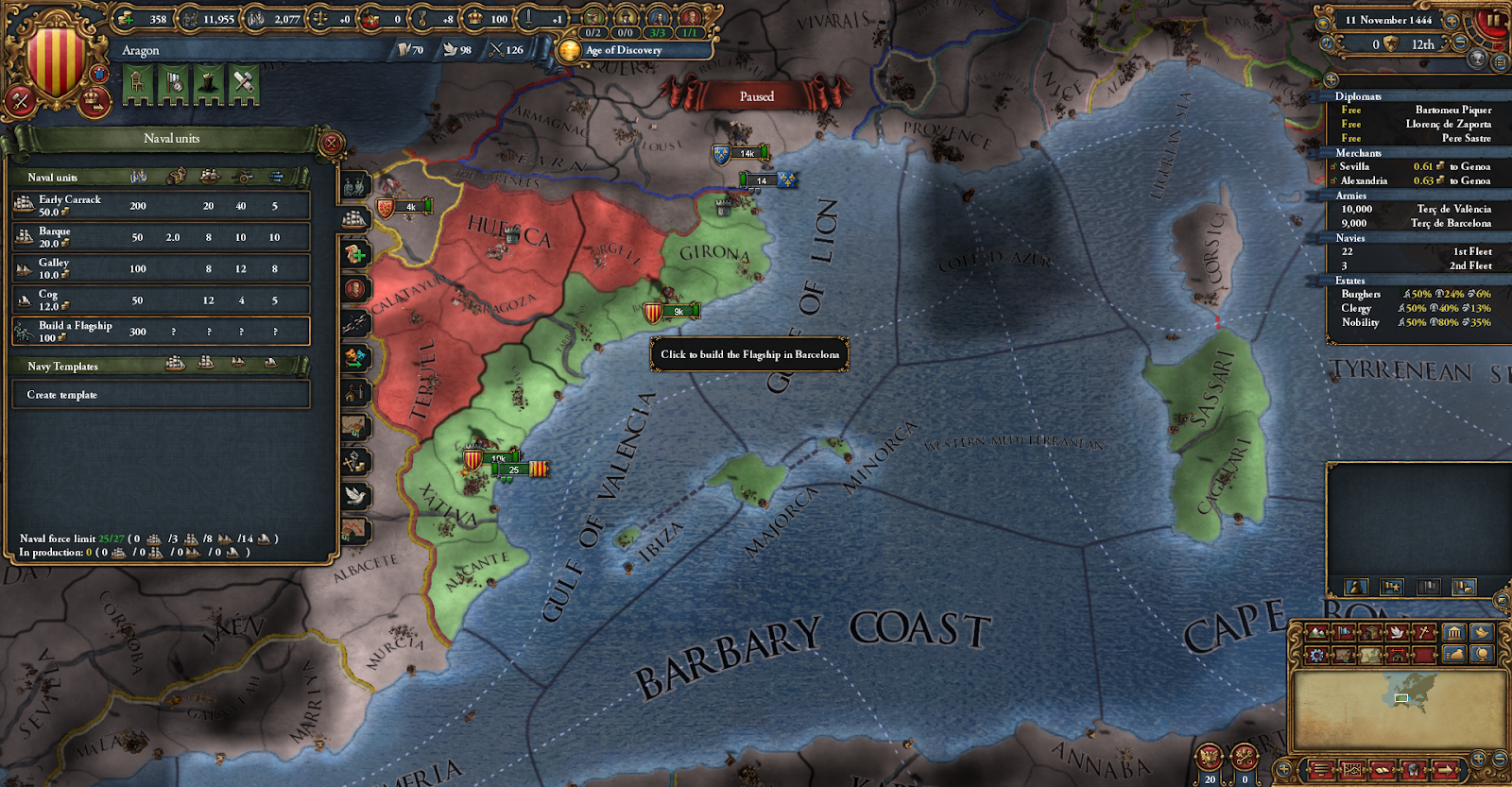 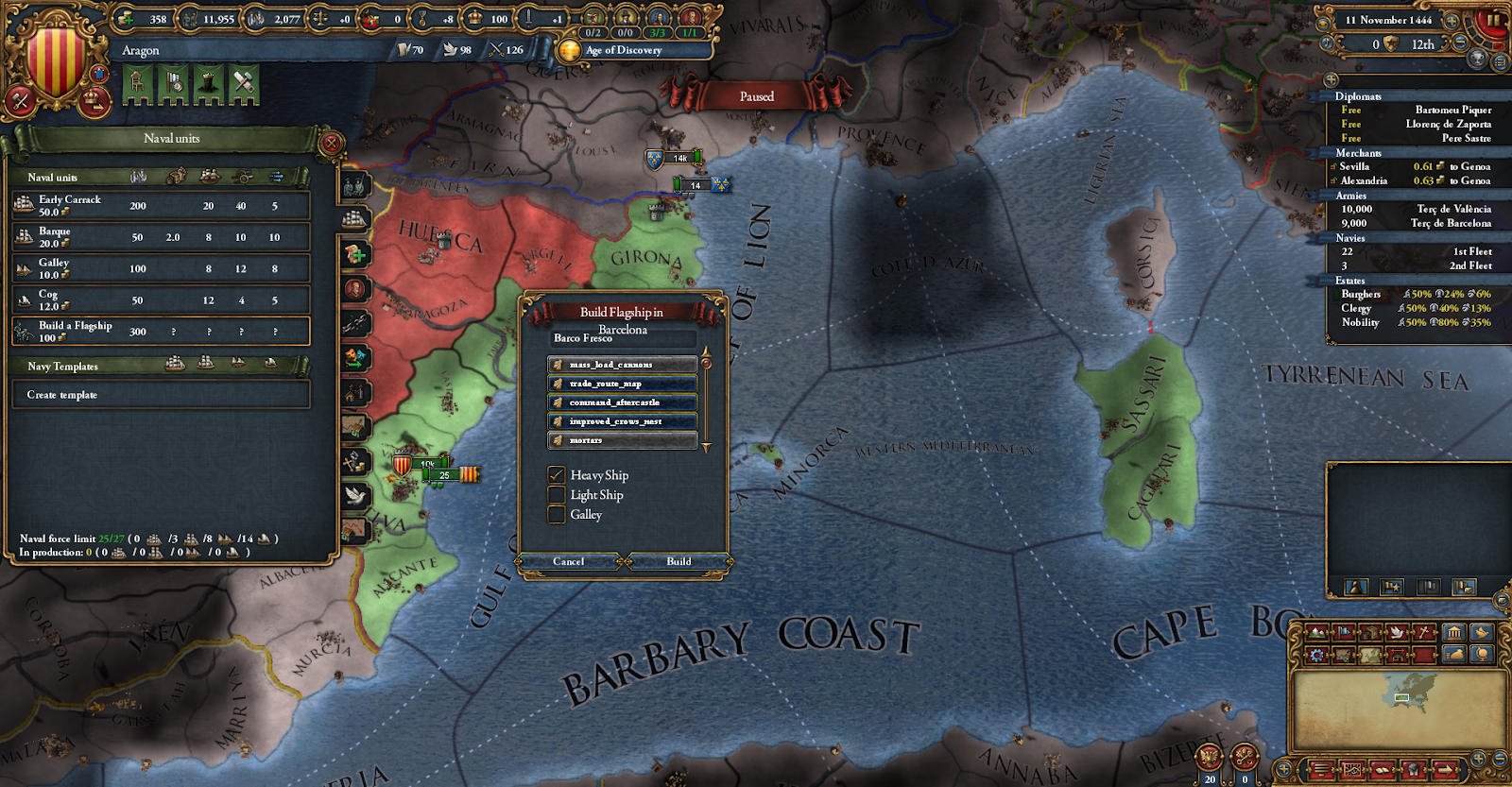 Here is a list as of this writing the current generic modifications we have in the game.
Then we also have a few country specific ones.
ART/INTERFACE NOT FINAL 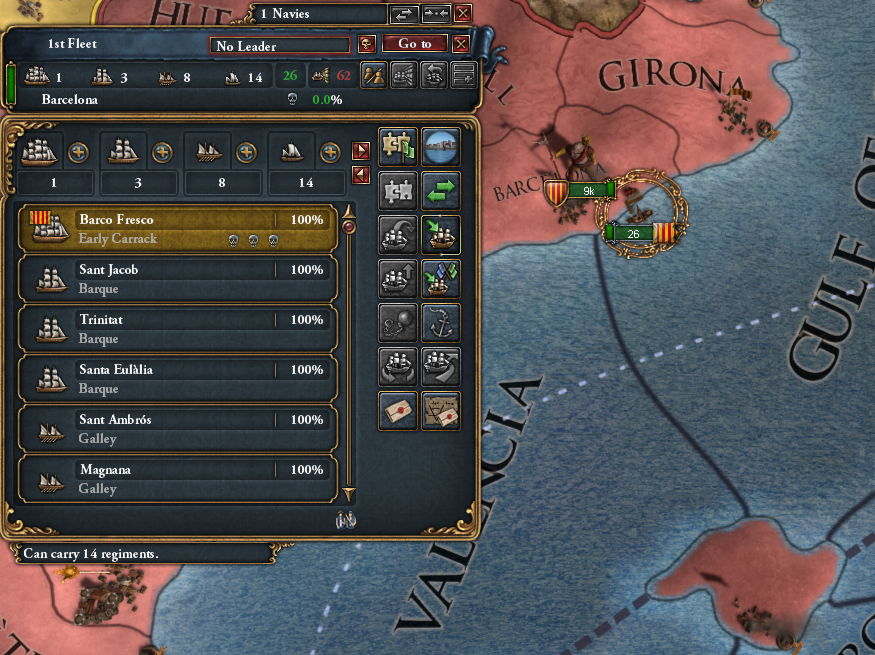 Next are the balance changes we’ve done. These are not tied with the future paid content but we are experimenting a bit with it to see how it gets received. There’s been a lot of discussion on the current meta with idea groups both on our forums and other platforms. So over the last couple of weeks we’ve been collecting data on what idea sets that are picked by players to get a proper statistical overview on where the meta lies. For clarification the data as follows is per player, per game. This means if two players in the same game picks the same idea groups, it will be counted twice. If you as a player start two seperate games and pick an idea group it will be counted twice. If you pick a group and then unpick it to pick another, it will count both instances of groups. I hope this explains what the data this is based on actually is.

Now one of the things we can see that Exploration ideas are the most popular idea set of all counting for 11% of the picks. Which makes sense, it’s an idea group that opens up a whole area for the player. Lowest on the list is Plutocracy with an abysmal 0.79%, one I’ve seen many point as an interesting and good group, but it’s unpopularity is probably due to its very scarce availability. Even Aristocracy clocks in on 3% which I've seen some refer to as "trash tier" of the military ones.

So the most unpopular idea groups are the ones we focused the most on, minus plutocracy. They are as follows. 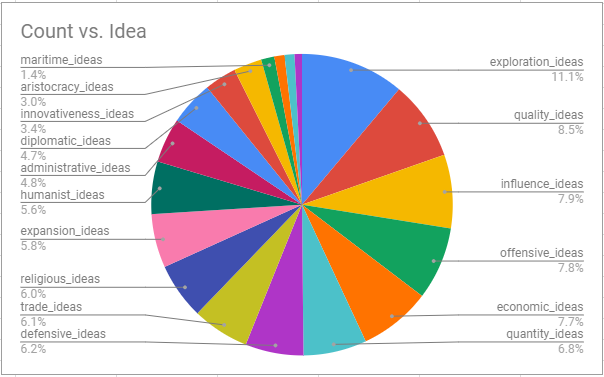 We also focused on some pet peeves of ours like influence ideas which was the third most picked one, religious, expansion, humanist, administrative, diplomatic and innovativeness ideas. I’ll attach the change log to the end of this dev diary but I’ll try to put some more descriptive text to some of the more important changes.

On the 5th idea for Espionage you now get, besides just cheaper fabrication cost, the ability to fabricate claims on behalf of your vassals. This works for any type of vassal except tributaries. Important to note is that the claim will belong to the vassal and not you. 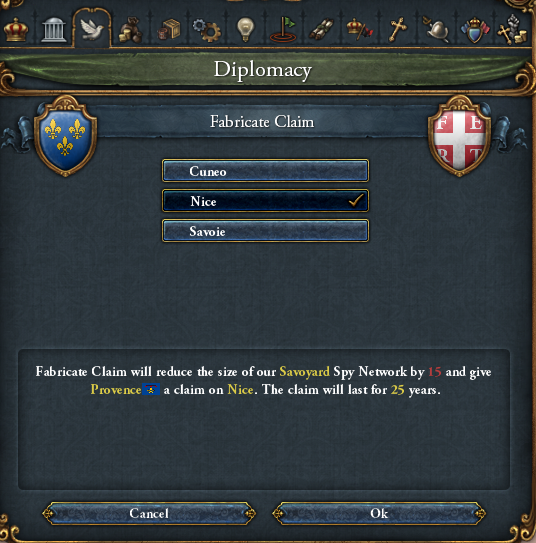 Another big change is to the colonisation game, We’ve thrown things around a little. The first two ideas of Exploration have been swapped and Exploration have been made to be a bit slower in colonization. Instead we have have buffed Expansion ideas to be the idea group that speeds up your colonisation. It gives you two colonist and way faster speed in getting it done. It’s finisher have been changed to give +5 Max States as well.

An experimental thing we are testing out now and seeing how it plays out as well is to put DLC locked values into the idea groups. People have for a long time asked for Innovativeness Gain in Innovative Ideas for instance. Now it got 50% of that, which converts into 5% Idea Cost if you don’t own Rule Britannia. A similar thing is -20% cheaper CoT Upgrade in Expansion ideas and -25% Expel Minority Cost for Exploration ideas.

Last important change is to Religious. The +2% Heretic Missionary Strength have been removed and instead we have 50% Missionary Maintenance there. Now you might be thinking “Well that value is worthless, missionaries costs literally nothing!” We’re changing that and removing the block on religious conversion requiring you to have the province fully cored and stated. Instead it will be a soft block coming from conversion now going to be real expensive. So to be extra clear, you will be able to convert any province again, it will just cost you a bucket load of ducats.

The idea is to have a non-linear cost increase based on the autonomy of the province you are trying to convert. At the moment this is up still for being tweaked and balanced but the raw formula for the yearly cost for all math geeks: base cost + dev factor * development ^ ( autonomy base + local autonomy * autonomy factor) * local/global missionary maintenance cost 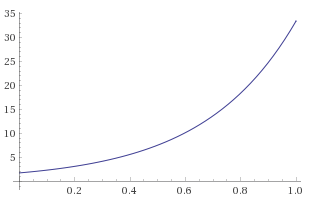 Which monthly cost for a 20 development province can be visualized like this with all base and factors being set to 1 and no modifier to the missionary maintenance cost.

It does mean while converting the 100% autonomy territories of 3 dev will cost extra, it won’t be that super more expensive. But if you for instance have Samarkand for some reason try to convert it while it not being cored and states, it’s going to cost you a fair deal.

Following with this change, since missionaries are now actually gonna ask you to pay up, we’ve also changed a bit on how the maintenance slider works for them. Previously you could avoid paying any cost because you just needed to have enough strength on it’s own as the slider only affected the base values of missionary strength. Second if you did lower the slider and could make progress before, but without those 2% you will get a hard stop on any progress to the conversion. Now instead the slider decides how much of your conversion speed is actually generated, so if you are making progress on the conversion and lower it, it will instead lower the amount of progress you get.

So if you are paying dough, you have enough strength, it will always generate some progress for you. 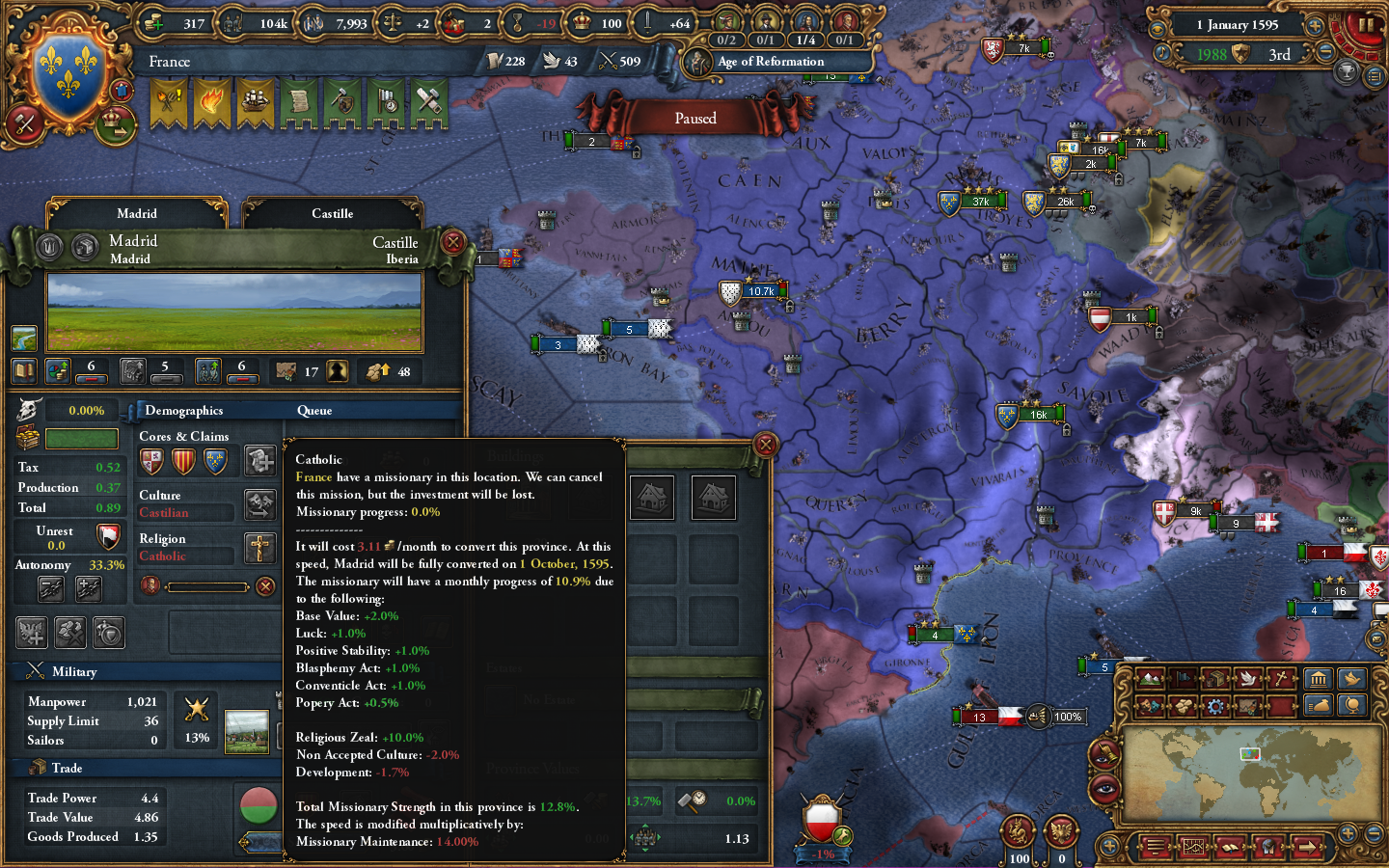 Also with this change it means I've reworked the missionary tooltip also a bit, since missionaries can cost differently depending on where you can see them, it will list all your active missionaries and their cost. 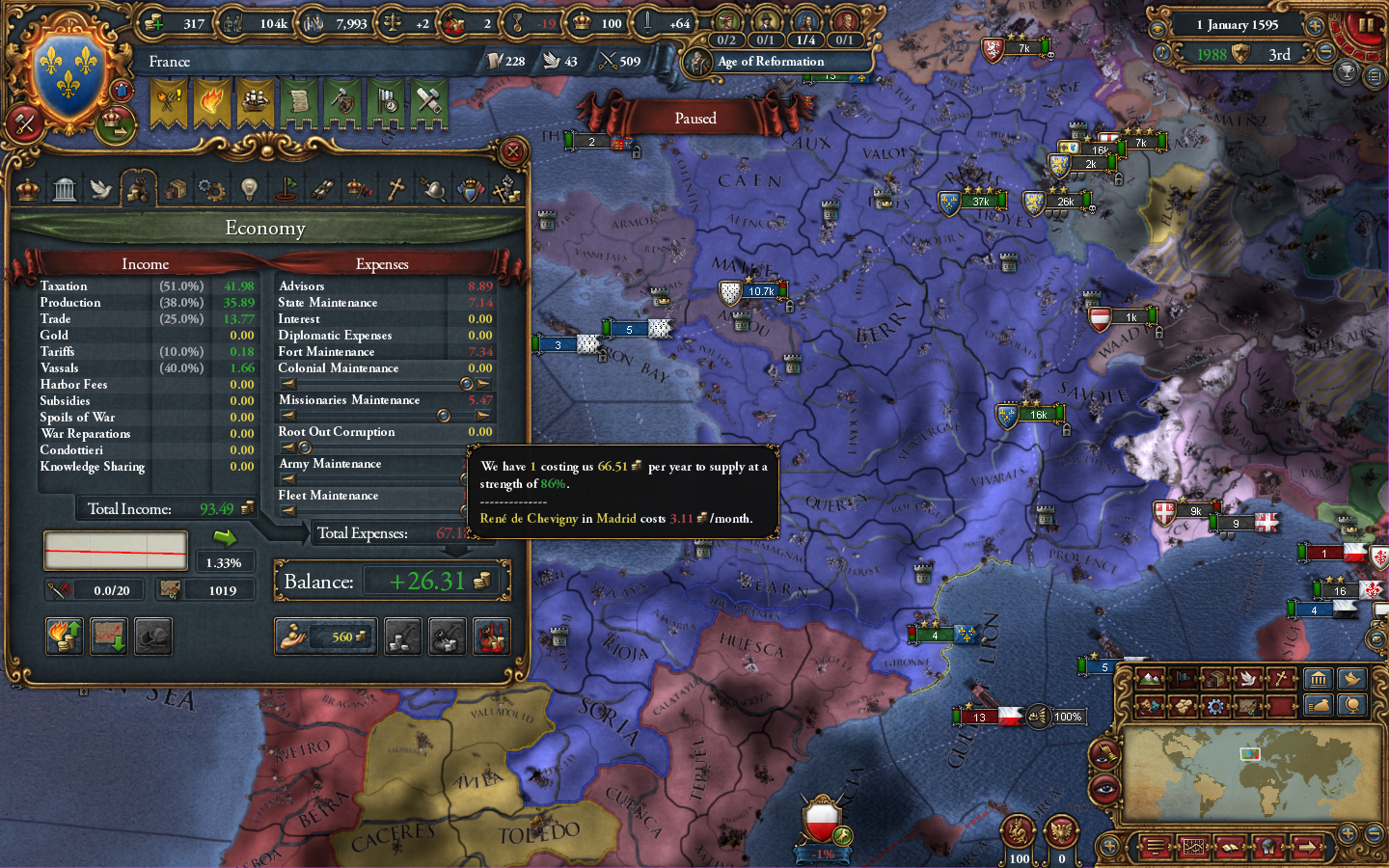 And here's a collection of the balance changes we've covered today.

I thought we were promised hedgehogs‽

Alfray Stryke said:
I thought we were promised hedgehogs‽
Click to expand...

Sorry @Johan said no on twitter
Toggle signature
That'd be Groogy. He's kinda like the King Joffrey of these forums, toying with us for his own sick amusement. - DominusNovus
The Groogy is an elusive and magical creature. You do not find the Groogy, the Groogy finds you. - Enlil
I thought he was just created in a lab - Viking

Is everyone able to use naval barrage or just Portugal?

Rinewind said:
Is everyone able to use naval barrage or just Portugal?
Click to expand...

Everyone, Portugal can though equip their fleet with Bombardiers that make it cheaper.
Toggle signature
That'd be Groogy. He's kinda like the King Joffrey of these forums, toying with us for his own sick amusement. - DominusNovus
The Groogy is an elusive and magical creature. You do not find the Groogy, the Groogy finds you. - Enlil
I thought he was just created in a lab - Viking

Give me back my heir chance! That was the main reason for me to pick this idea group early x.x
R

I see what you did there, slipping the name in.

Interesting rebalances. I'll have to see how it works out. The loss of Conversion vs Heretics makes Reformation Crushing harder for sure.

Man I really have some bad timing, I came to the forum to post my idea group suggestion thread to find this.

DLC confirmed as “Golden Century” then? I’d not seen that mentioned anywhere else.
R

Because Sweden is not overpowered
V

What is golden century ?

RMS Oceanic said:
Because Sweden is not overpowered
Click to expand...

A bit careless there Groogy.

Thanks for revealing this ImPak's name: Golden Century
Toggle signature
Furor Teutonicus - The Archaeology and Tribes of the Ancient Germanics
On the Boii, Vindelici, Raetians and "Germania"
The Celtic invasion of Greece and the Celts in Pannonia and Transylvania
Heritage Suggestions for some European Barbarians
-
"In signum concordiae patris ac patriae MDCCCVI.
Nec temere, nec timide.
Cui non civium servitus tradita, sed tutela."​

The Swedish flagship seems a little tiny bit OP. Also wouldn't it be more logical and give the player more freedom if the extra modifications were part of an idea group instead of a country? It makes those idea groups actually more useful and doesn't shoehorn you as much into playing specific countries. I mean the Spanish and Portuguese get like 3 mods each while the English/British get none. And there also is no possibility to get my own modification if I make Morocco or Ireland a major naval power for example.
M

Groogy said:
Second if you did lower the slider and could make progress before, but without those 2% you will get a hard stop on any progress to the conversion. Now instead the slider decides how much of your conversion speed is actually generated, so if you are making progress on the conversion and lower it, it will instead lower the amount of progress you get.

So if you are paying dough, you have enough strength, it will always generate some progress for you.
Click to expand...

I literally cannot understand a single sentence of this part. Can someone explain it?

Also, name of next expansion: Golden Century, for those who didn't notice.
Toggle signature
Sit now there, and look out upon the lands where evil and despair shall come to those whom thou allied. Thou hast dared to mock me, and to question the power of France, master of the fates of Europe. Therefore with my explorers thou shalt see, and with my spies thou shalt hear; and never shall thou be released from vassalage until all is fulfilled unto its bitter end.