Good day all, Tuesday is ever a day for excitement as tensions and plotting surface in the office in the runup to another Dev Clash session. Today however feel free to tune in an hour earlier, as we'll be having a special wee stream for Third Rome itself.

For now though, we're going to talk about features available not only for Russians, but the Orthodox world at large: Metropolitans and Icons.

Patriarch Authority has been a game concept for Orthodox nations since time immemorial, or at least since release. While it's effects have been tweaked a little over the game's lifespan, sadly it has remained somewhat stale in that you wait for events to push it up or down. We've decided to revisit this mechanic to give it more life for Third Rome.

Patriarch Authority will still grant meaty bonuses to Unrest suppression, Missionary Strength and Manpower but it can now be spent to commission new Icons for your nation. Orthodox nations across the globe will be able to make a call against the longlasting effects of high Patriarch Authority against a strong temporary bonus granted from commissioning an Icon. 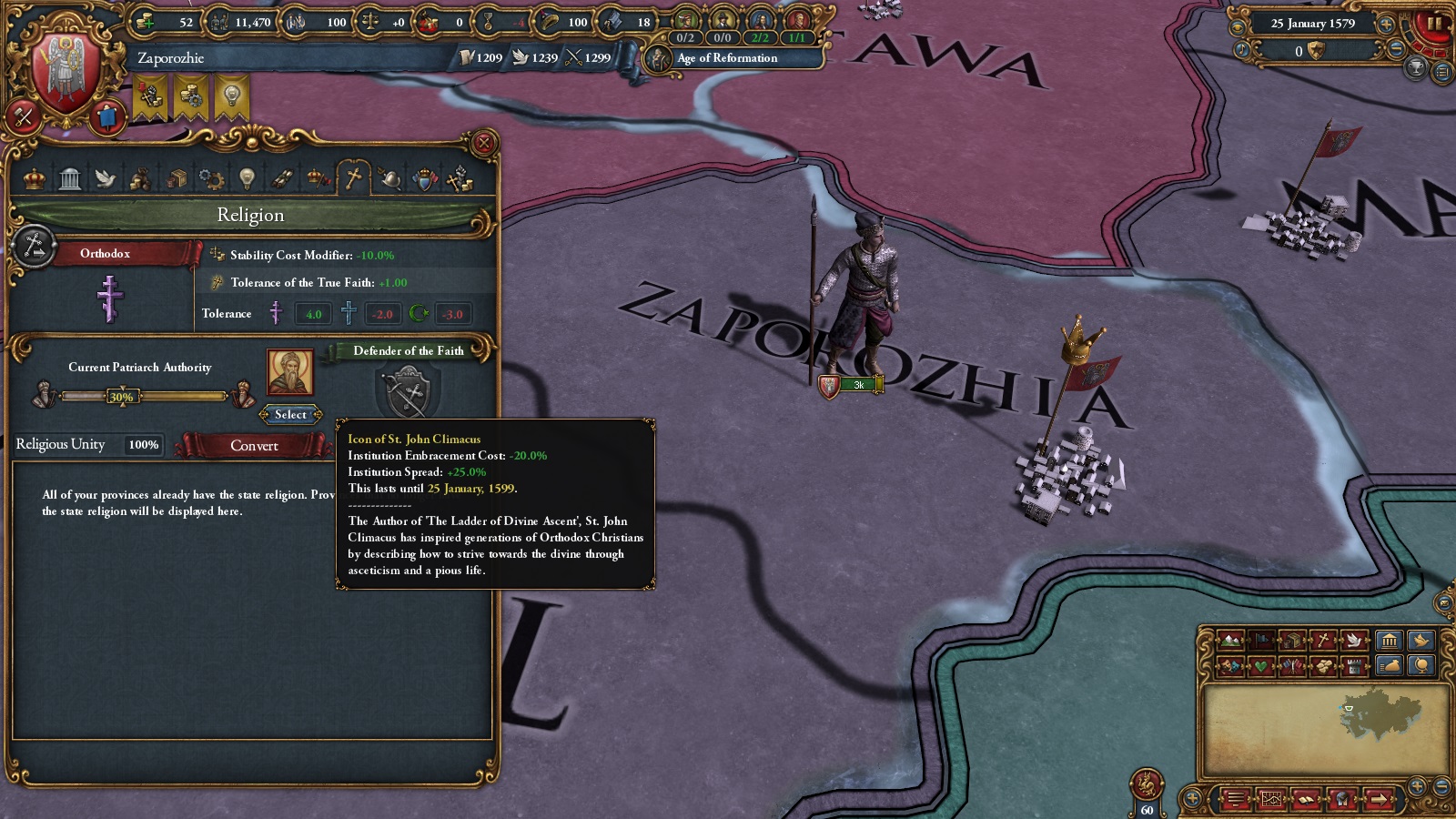 Commissioning an Icon will cost 10 Patriarch Authority and will grant that icon's bonuses for your nation for 20 years. You can at any time switch your Icon out for another at a cost of a further 10 PA, or just wait for them to run their course. Each Icon's effects are as follows:


Code:
So a lot of flexibility is offered to the Ambitious Orthodox nation willing to part with some of their Patriarch Authority. Sources of Authority were, however, few and mercilessly random, so we have added a new State ability for followers of the Orthodox faith: Consecrate Metropolitan. 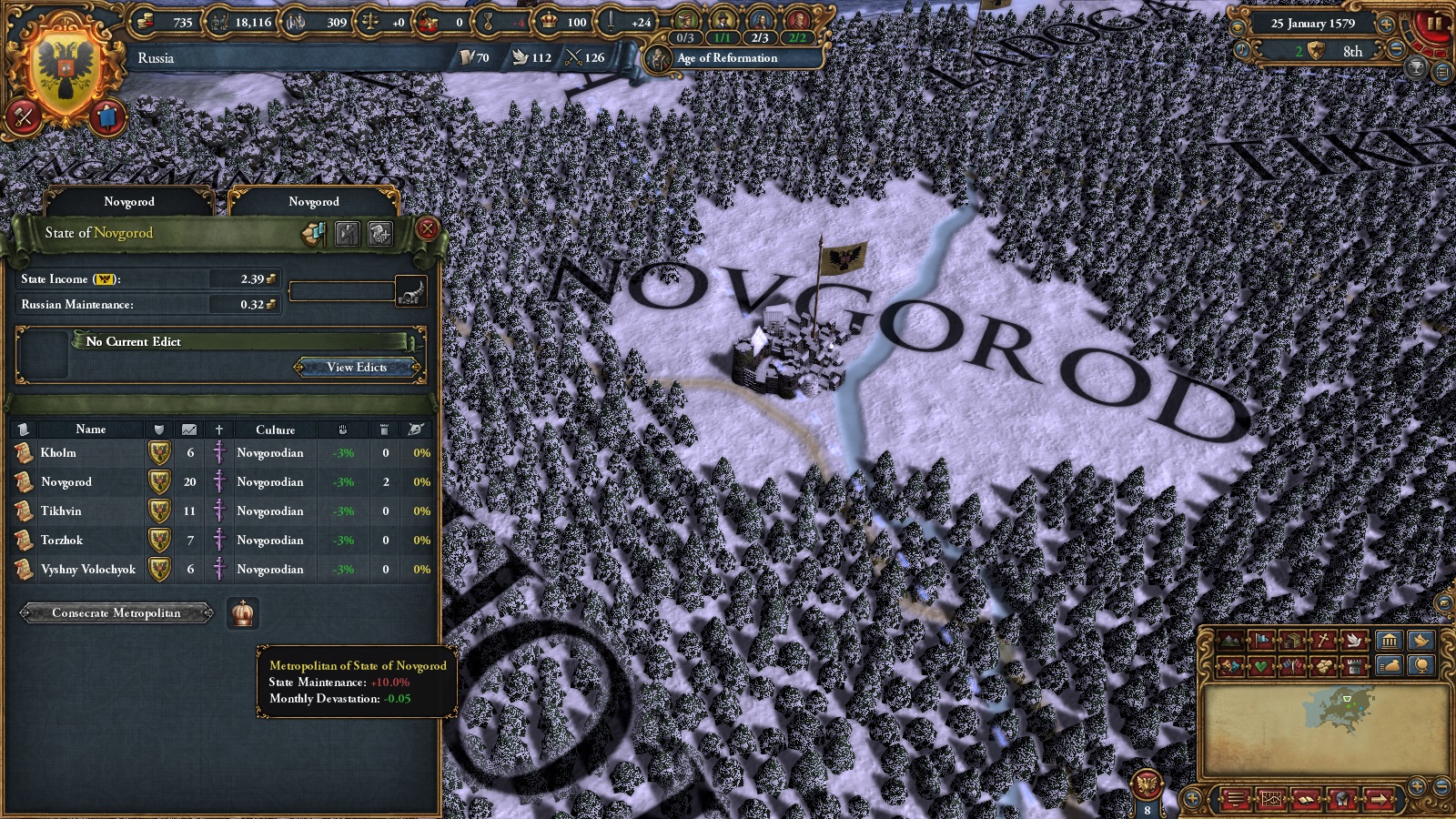 In any well developed (30+) State where your religion is in all provinces and cultures are accepted, you can Consecrate a Metropolitan. This will permanently grant a reduction to Devastation at the cost of slightly increased State Maintenance, but when used will bestow +5 Patriarch Authority. Any Orthodox nation can do this, but it plays particularly well into the Tsardom's hands with their increased State limit, allowing them to have more Metropolitans and boost up their Patriarch Authority further.

Both Metropolitans and Icons are features of Third Rome, our upcoming Immersion Pack for EU4. Next week I want to go over some of the changes coming along with v1.22. See you then!

Can you remove Metropolitans? Or is this considered a straight-up 'buff' with no reason to remove it?

Thanks for the diary Jake, nice improvements for the orthodox faith, looking forward to test them.
Toggle signature
L'effet Mer est éternel

Politic Revolutionnaire said:
Cool, will there be a dev diary next week btw? I heard there was a holiday?
Click to expand...

How will Orthodox work for those without TR? Same as now?

What will happen if a state with Metropolitan loses development or changes hands?

Also, those are some very powerful bonuses. I wonder if Russia will become the most powerful nation now.

Oh, and how does the interface looks like for Orthodox Manchu? Banners and Metropolitans take up the same spot.
Toggle signature
Sit now there, and look out upon the lands where evil and despair shall come to those whom thou allied. Thou hast dared to mock me, and to question the power of France, master of the fates of Europe. Therefore with my explorers thou shalt see, and with my spies thou shalt hear; and never shall thou be released from vassalage until all is fulfilled unto its bitter end.

Not all heroes wear capes.
Toggle signature
"It is well known that nothing is such thirsty work as the acquisition of knowledge."

That all sounds really great. Is there any confirmation of a release date?

Do you regain the 5 Patriarch Authority after the decret is reenact or do you need to change the decret and use it in another state?

A very welcome addition! With these changes Lithuania and even Poland have a good option to (re)convert to Orthodoxy and still be competitive. The very good illustration of religion being viable is when other nations want to convert to it.
Toggle signature
Ukrainian Lands at the 16-18th Centuries Maps
[EU4] Multiplayer Rebalance Mod (MPR by ZP) [SteamWorkshop] - a mod designed for MP fans by an MP fan

Some have a scottish accent.
I

Isnt it a bit dangerous to make religious mechanics paid content in case you want to enhance it further in a future patch?

If you think something is wrong with American Dream please bug report it. As far as I have been able to find out it is working as it was designed (ie flavor events for starting in that start date).

There are no open reported bugs on it and it has been updated 20 times since it was first released according to our version system.
Toggle signature
No fighting in here! This is the war room!

National Day of Sweden, also known as the 494th anniversary of Sweden telling the danish king to stay out.
Last edited: May 30, 2017
Toggle signature
Baal: You can't be serious.
O'Neill: Yes I can... I just chose not to.

What about CK2 converted saves with Iconoclasm ? They were against any kinds of icons. Will they get same mechanic or the old one ?
C

Powerful bonuses, but honestly I was expecting some more bonuses and penalties with high and low patriarch authority. And some way to represent orthodox ecumenical councils to make that faith more unique i comparinson to protestantism and reformed. Also: Will there be more events about the orthodox faith as a whole?

From what I've seen so far, I really like the artwork for the Icons.

Cralius said:
Powerful bonuses, but honestly I was expecting some more bonuses and penalties with high and low patriarch authority. And some way to represent orthodox ecumenical councils to make that faith more unique i comparinson to protestantism and reformed. Also: Will there be more events about the orthodox faith as a whole?
Click to expand...

Orthodox ad 2, Catholics had 3 in this timeframe. Not really worth its own mechanic.
Toggle signature
Nationality: Croat
Religion: Roman Catholicism
Ideology: Rightist
Last Megacampaign: CK2 -> EU4 -> Vic2 - Crusader Panonians
Last EU4 playthroughs: France, Commonwealth
GENERATION 40: The first time you see this, copy it into your sig on any forum and add 1 to the generation. Social experiment.
F