Hello and welcome to another development diary for Europa Universalis IV. This is probably the last one I’ll write for some months, as I’m taking some paternity leave. I’m leaving you in the capable hands of DDRJake though, who’ll give you weekly diaries in June, August and September.. As you all know, we’re a swedish company, so July is sacred and holy, and must be worshipped in the sun.


Speaking of Swedish, I guess it is time to talk about something related. Culture.

Culture in Europa Universalis, as most of you seem to grasp, have nothing with linguistic relations to do, but more of a semi-arbitrary limits of who gets along better with who, and who could rule others easier through history.

Which cultures were accepted in your nation in EU4 has not really been controllable though before, as you get gaining or losing, depending on the presence of a culture in your country.

In 1.18, which we aim to release in the autumn, we have completely removed the cultural acceptance percentage system, and instead give you control over which cultures are accepted or not in your empire.

First of all, there is now a limit on how many cultures a nation can accept.

There is a base of 2 accepted cultures, The Humanist Idea ‘Cultural Ties’ gives you 2 more slots, Enlighetened Despotism increases it with up to 3 at Empire level & Several Nations have ideas giving them an extra slot. There are also policies that can give you an extra slot each if you so desire and Diplomatic Technology gives you up to 5 more slots, currently from level 8, 14, 20, 26 & 31.

If you have too many cultures, you will lose the last one you accepted.

Any accepted or same culture group can be made into primary culture, if its at least 50% of your cored state development. This costs 100 diplomatic power and obviously this means that the cultural shift decision has been made obsolete and is now removed.


You can promote any culture in your nation that has at least 20 cored development in a state. It costs 100 diplomatic power.

You can also remove an accepted culture if you so wish, which costs 10 diplomatic power, and adds 5 unrest in all the provinces with that culture.


Here is a look of the new government window, which includes the culture lists. 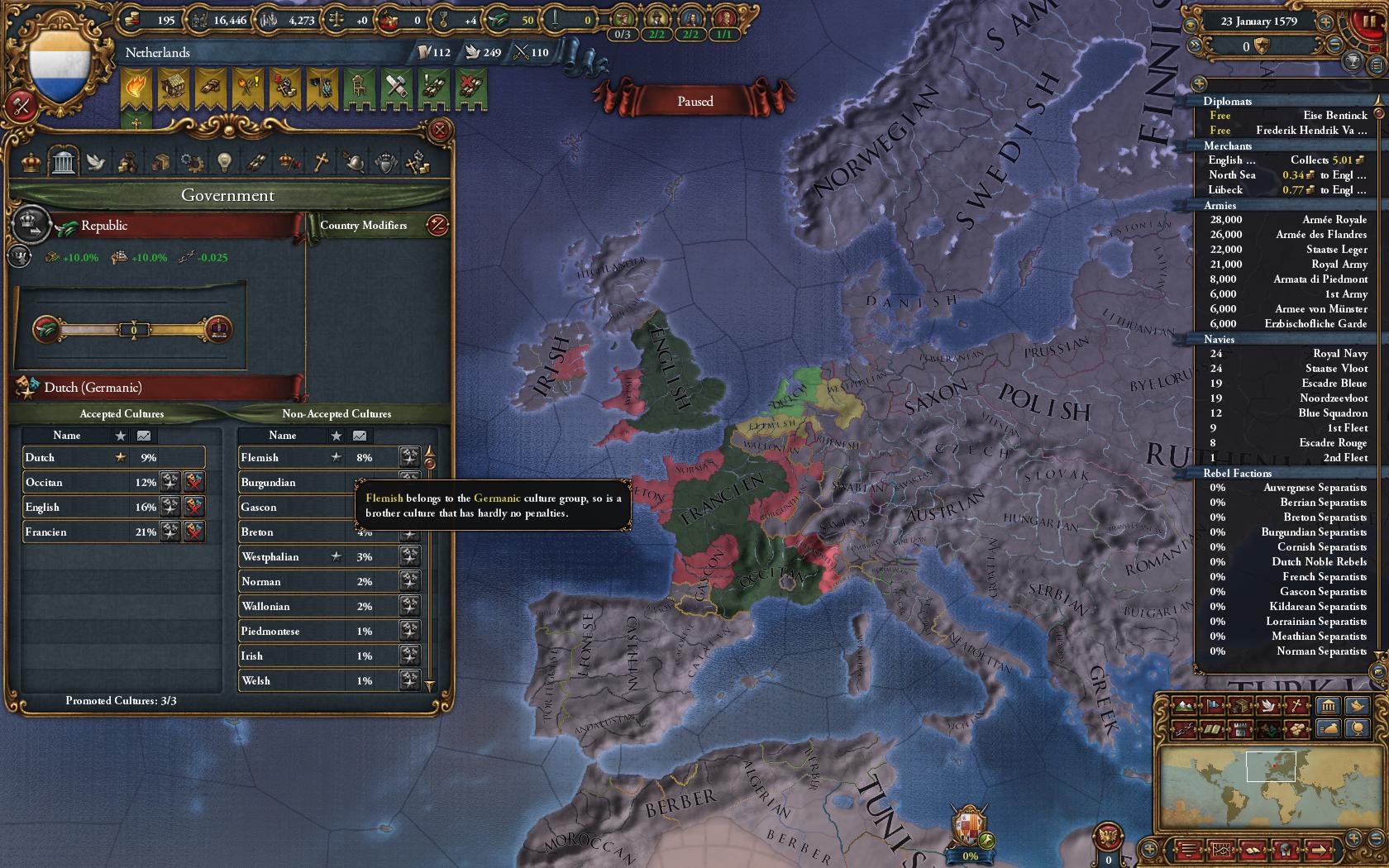 Stay tuned, next week Jake will all tell you about WHY it is better to be a great power than a minor.
Reactions:

Hardly no penalties? Shouldn't that be "hardly any"?
Toggle signature
I play Crusader Kings 3, Kaiserreich and TNO o/
Reactions:
G

Nice, I've always thought more control is a good thing. I'd love to see, in the future, more ability to control dynasty and personal unions. It's so random right now. At least the culture stuff looks great.

@Johan enjoy your time away with kids!
Toggle signature
My Mods
My Hungary Overhaul Mod useful for playing for and against
http://forum.paradoxplaza.com/forum/showthread.php?808023-MOD-Hungary-Overhaul

Better technology and culture systems in one patch?! It seems the Paradoxian dieties finally listened to our prayers.
Reactions:

What was the reasoning behind these changes?
Toggle signature
"Gonna fly this baguette to the moon somehow!"
Reactions:

Empire cultural union acceptance is still in though, right?
Toggle signature
"You know how the English conquered Wales? One village at a time. Because no Welshman would run to the next Welsh village to warn them the English were coming. You all went down warm in the knowledge that the next village would get it too and they deserved it for being foreign." -- William of Stonham
Reactions:

Just an idea: with the system outlined here, same-group cultures are as easy to accept as different-group cultures. And since same group non-accepted cultures have less penalties, I foresee that this will result in a situation where it usually makes more sense to accept completely foreign cultures than the ones most related to your own. This does not make much sense to me, though I don't know about the rest of you.

Edit: Didn't consider Empire level cultural union, so this may very well not be an issue at all.
Reactions:

Krebsig said:
Better technology and culture systems in one patch?! It seems the Paradoxian dieties finally listened to our prayers.
Click to expand...

yeah, sorry about not replying to prayers last year or so.. i may have had an hangover and was sleeping.

Imperial cultural Union is still a thing in 1.18 correct? Love the development so far.

imvdm said:
Imperial cultural Union is still a thing in 1.18 correct? Love the development so far.
Click to expand...

Think they recently suggested it would be "a big one".
Toggle signature
Paradox OT BB2 Champion
2017, 2020​

Has the "Crown" screen changed other than the removal of cultures and government types from there?
Toggle signature
Culture: Finnish
Ideology: Economic Liberalism
Religion: Secular
Location: Uusimaa, Finland
Reactions:

TheWalttu said:
Has the "Crown" screen changed other than the removal of cultures and government types from there?
Click to expand...

Great improvements ahead but what the hell is "Francien"? It would be a language at best but most linguists do not even consider it as such.
Reactions:

Does this mean that culture groups will be reverted to how they were before - historically accurate rather than the new gameplay friendly, geographically similar groups?
Toggle signature
~~Modder~~​
Reactions:

To be honest I'm not a fan of this at all. Seems like a no brainer to always go with the largest culture. It makes the game feel more arcadey and less history inspired. I'm not really saying the old system was great, I just find the trend towards arcade disheartening.
Toggle signature
Extremely dangerous to our democracy.
Reactions:
Show hidden low quality content
You must log in or register to reply here.
Share:
Facebook Twitter Reddit Tumblr WhatsApp Share Link
Top Bottom