Good morning everyone. As you know, we’re hard at work planning the grand European update with a tentative release date of Q4 2019. Today I’ll be airing some of my early thoughts on the upcoming map updates for France and Italy. I’d like to stress that these thoughts are exactly that - early ideas that will be iterated on substantially before implementation and release. Part of my reason for writing this is to help consolidate my ideas, seek community feedback, and to set some expectations for the future.

First, let’s take a nostalgic look into the distant past of patch 1.4, the oldest patch still available on Steam, and marvel at how far we’ve come since those primitive times.

And for reference, here is France in the current version (1.28) of the game:

Province density has increased somewhat; lonely Provence is now paired with Forcalquier, Languedoc is no longer unreasonably massive, and the Normandy region is much prettier these days. The 1.25 ‘England’ patch was the most recent iteration to the French map, and we’re very happy with the changes it made to northern France. Province shapes, densities, ownerships, etc are in a very good place for the northern part of the region. Southern France however could use some love. I’ve been keeping an eye on this thread which has some interesting ideas on how it could be improved:

As I’ve said in the thread, I’m particularly eager to add the major French naval dockyard of Toulon, splitting it from the Provence province which would likely have to be renamed. Foix and Carcassonne would also be worthy additions, and La Marche nicely splits up the relatively large Limousin province. Albret I find much less convincing; while Gascony potentially has room for a new province I’m not sure that there’s a good candidate with any real significance that also fits the space between Aquitaine and Labourd. I rather like this suggestion overall. It definitely hits the mark for the province density we’re aiming for in the region.

Another notable difference between Ye Olde France and our current iteration is the presence of the French vassals. Ultimately removed for balance reasons, we’d like to return them to their former glory. The story of France in our period is one of consolidation, and to that end we feel that the return of the vassals would make playing as France feel more like you are slowly building a centralized nation out of a fragmented feudal realm. We also think it’s a shame that we so rarely see many of the wonderful models for the French minors that are part of the Hundred Years’ War Unit Pack.

Let’s set our sights on Italy next: 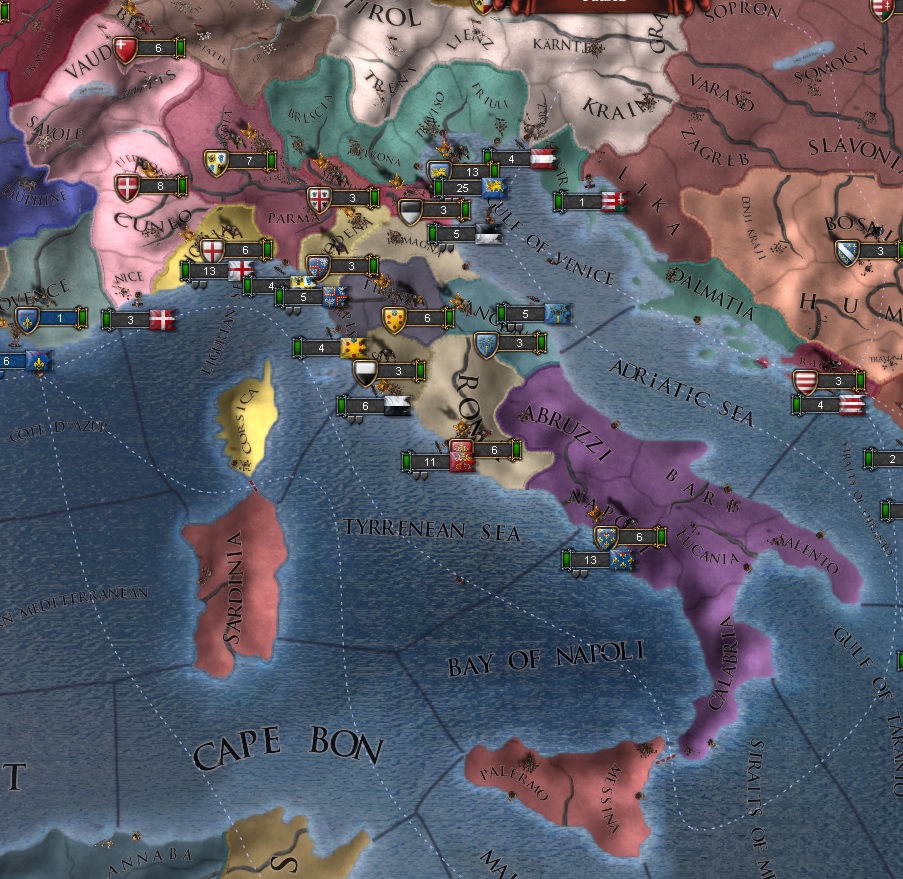 And for reference, Italy as it is right now: 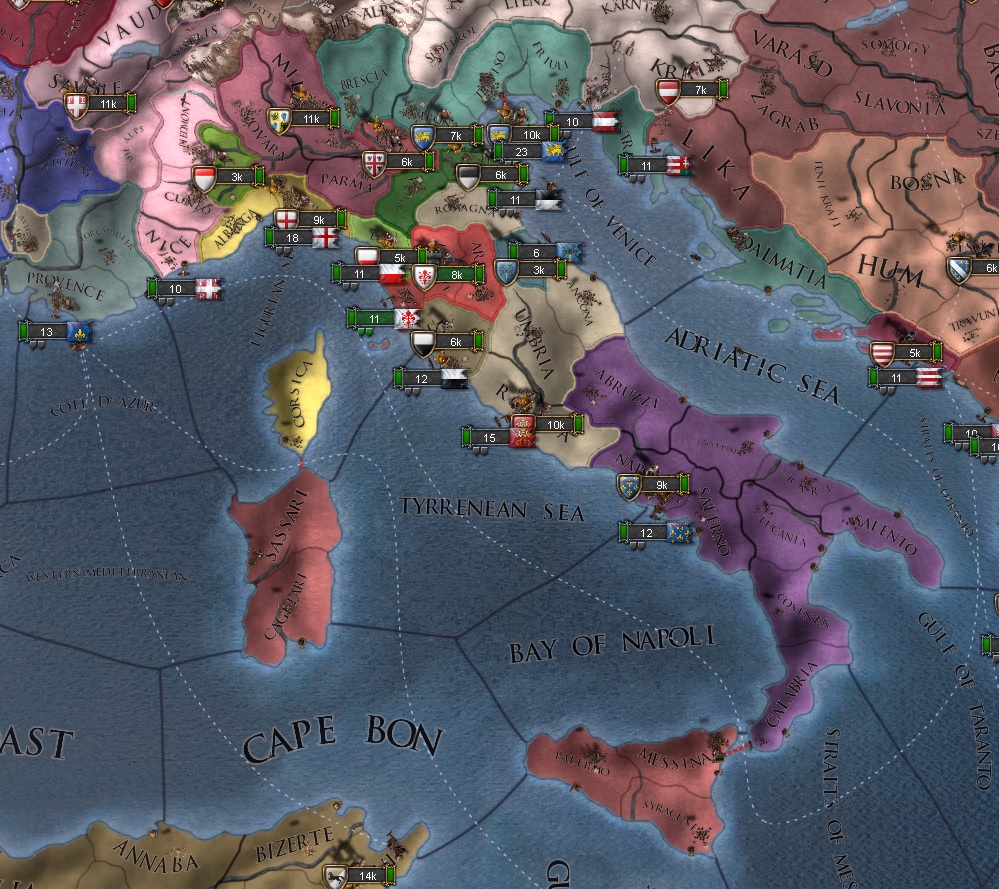 In stark contrast to France, Italy has more tags in 1444 rather than less. Montferrat and Lucca have made a triumphant appearance while Tuscany has been replaced by Florence. The Florentine replacement brings back fond memories for me - I’d advocated for Florence on the forums long before starting at Paradox, and created a mod compatible with the pre-release demo version of the game that did exactly this. I think we can expect to see Florence getting some love in the form of a fancy new mission tree at the very least.

We can also see a move towards a higher province density, to the point where it’s going to be a challenge to find room for yet more provinces when we start on the next iteration of the map. Something else we need to be concerned about when we add more provinces is that we generally want to preserve the overall balance of the region (though this isn’t always the case, sometimes we deliberately use province changes to alter the balance) and keep the same feel for how wealthy its provinces are. Italy is a region that should and does have a lot of very high development provinces - adding a great deal more would force us to split this development up and make the region feel more generic. 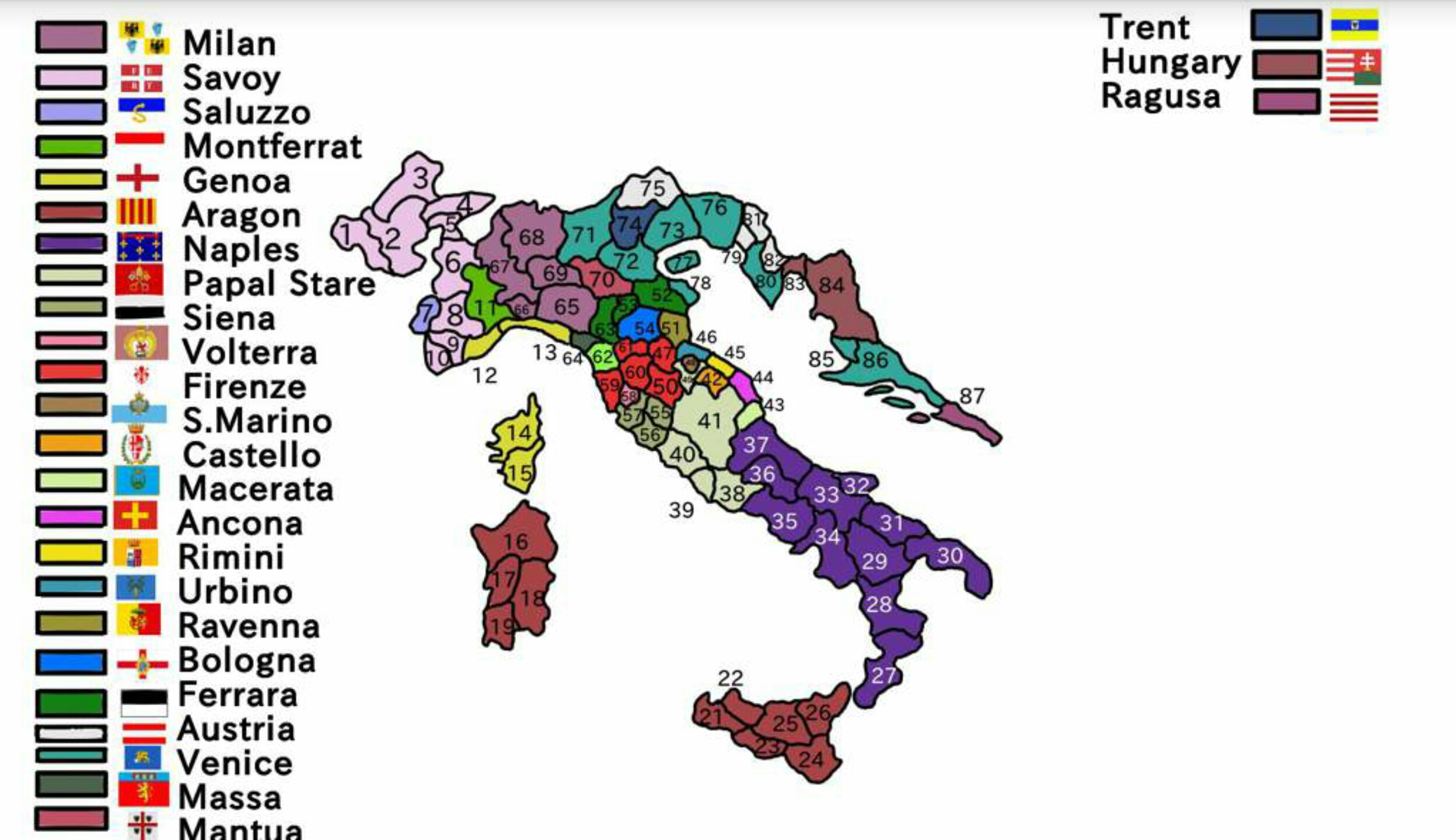 Here we see a suggestion by reddit user u/ItalianMapper. While it’s certainly a thing of beauty in its own way, we will definitely not be implementing anything close to this for the European update. Space is at a premium and tiny provinces as seen here simply aren’t workable. That said, I quite like the idea of splitting Sicily into significantly more provinces. We’ve toyed with the idea of adding 1 more province to fill out the Sicily area (currently at 4 provinces including Malta) but haven’t found a satisfying way to do this. As such we’re considering whether a 6 province (7 including Malta) Sicily is something we want to experiment with. I’m also interested in adding a Bologna tag, splitting the Novara province (a good suggestion for which I’ve seen in this thread), and doing something with Venetian terra firma that’s remained largely unchanged since the release of the game.

That’s all from me this week. I ask you once again to bear in mind that we are still very early in the development process for the European update, and nothing said here should be considered our final stance on a matter. We’d like to continue gathering community suggestions and expectations for France and Italy, so please continue to share your ideas in our suggestions subforum or in the comments below. Next week I’ll be back to talk about our ideas for updating the Balkans, so stay tuned for more map talk.
Last edited: Mar 4, 2019

Would splitting Barrois having any historical warrant?
I've often been thinking whether it's too realistic/historical for a single province to be able to block most of the eastwards expansion of France. After all it was that route which often was used to invade Germany, and opposite.
Toggle signature
We need Chalcedonian Christianity in 867 A.D. instead of Catholic/Orthodox split for Crusader Kings III. Copy and paste this into your signature if you agree!

This might be a stupid question but I'm assuming the Q4 European update isn't the only update for this game in 2019?
Toggle signature
1.29.5 Yuan 1589 True 1 Tag, VH, No Loans, No Savescums

When i read that, its was exactly my thoughts. Hope so too.

Fingers crossed for a San Marino on the map! A quick google "oldest country in the world" will yeild some interesting results so it'd be awesome to see them on the map with their own unique ideas!

I hope not, I'm still waiting for fixes in Central Castille and Poland.
Toggle signature
A few suggestions for Iberia: https://forum.paradoxplaza.com/forum/index.php?threads/a-few-suggestions-for-iberia.1123194

There may be a free patch between now and then, but our main focus for this year is a single expansion to be released in Q4.
Toggle signature
Victoria 3 Game Design Lead

As a French, where do I sign to get the map and the return of the vassals (hopefully with a special centralisation mechanic for France)?

Kathkere said:
Fingers crossed for a San Marino on the map! A quick google "oldest country in the world" will yeild some interesting results so it'd be awesome to see them on the map with their own unique ideas!
Click to expand...

We are finally getting a decentralised France back, and now where the Estates are free, I think we could even use this opportunity to do something with them to reflect the absurd Amount of power they had historically in France, see M&T who do a really good job at this
Last edited: Feb 26, 2019

navaluiki said:
I hope not, I'm still waiting for fixes in Central Castille and Poland.
Click to expand...

MiniaAr said:
As a French, where do I sign to get the map and the return of the vassals (hopefully with a special centralisation mechanic for France)?
Click to expand...

About Italy, you should really think about creating a link between the Savoie and Piedmont provinces. If Savoy loses the Valais/Wallis province, as historically, then it has 2 unconnected halves which is really not good.

neondt said:
Next week I’ll be back to talk about our ideas for updating the Balkans, so stay tuned for more map talk.
Click to expand...

I'm looking forward to the discussions

What I'd like to see is a thorough rework of vassals, where fragmented realm is weaker instead of being much stronger. And by rework I mean something more substantial than just bumping LD or something.

MiniaAr said:
About Italy, you should really think about creating a link between the Savoie and Piedmont provinces. If Savoy loses the Valais/Wallis province, as historically, then it has 2 unconnected halves which is really not good.
Click to expand...

Agreed. We definitely want to take another look at the Alpine passes. More on that later.
Toggle signature
Victoria 3 Game Design Lead