I am @Trin Tragula and this is the first of 3 developer diaries on what we have been up to when it comes to map changes for the upcoming patch. For 1.26 we will be focusing on India and, among other things, the revamping the Indian map that was last updated for Art of War in 2014.

While the Art of War update did add a lot of depth to India, compared to the original release of the game, much time has now passed. The general level of detail when it comes to what the map portrays is now much higher and, like the Middle East before it, India is due for a facelift.

The Indian subcontinent was in many ways central to the era that Europa Universalis portrays. India was the origin for a large portion of worldwide manufactures and the home of about as many people as the European continent itself. The search for Indian riches did its part in fueling the Age of Exploration, and the rivalry over controlling the Indian trade came to involve most European countries with a major navy.

Both rich and populous, India itself was as politically diverse as Europe in this era, with strong states such as the Vijayanagara Empire, the Delhi Sultanate or the short lived Sur Empire, among many others. Most of all, perhaps, it is associated with the rise and decline of the great Mughal Empire, founded by Babur and maintained by his descendants for over 200 years before being eclipsed by the sudden rise of the Maratha Confederacy and various local strongmen going into business for themselves.

Eventually, India was also where Great Britain and its East India Company carved out a great colonial Empire.

In total the overhaul has added 106 new provinces in India with the goal of both covering the local nations of the region better and to allow for European countries to acquire footholds and expand there.

Today I will be focusing specifically on the region to south of the Vindhya range.

Central Deccan - The Bahmani Sultanate and the Vijayanagara Empire​ 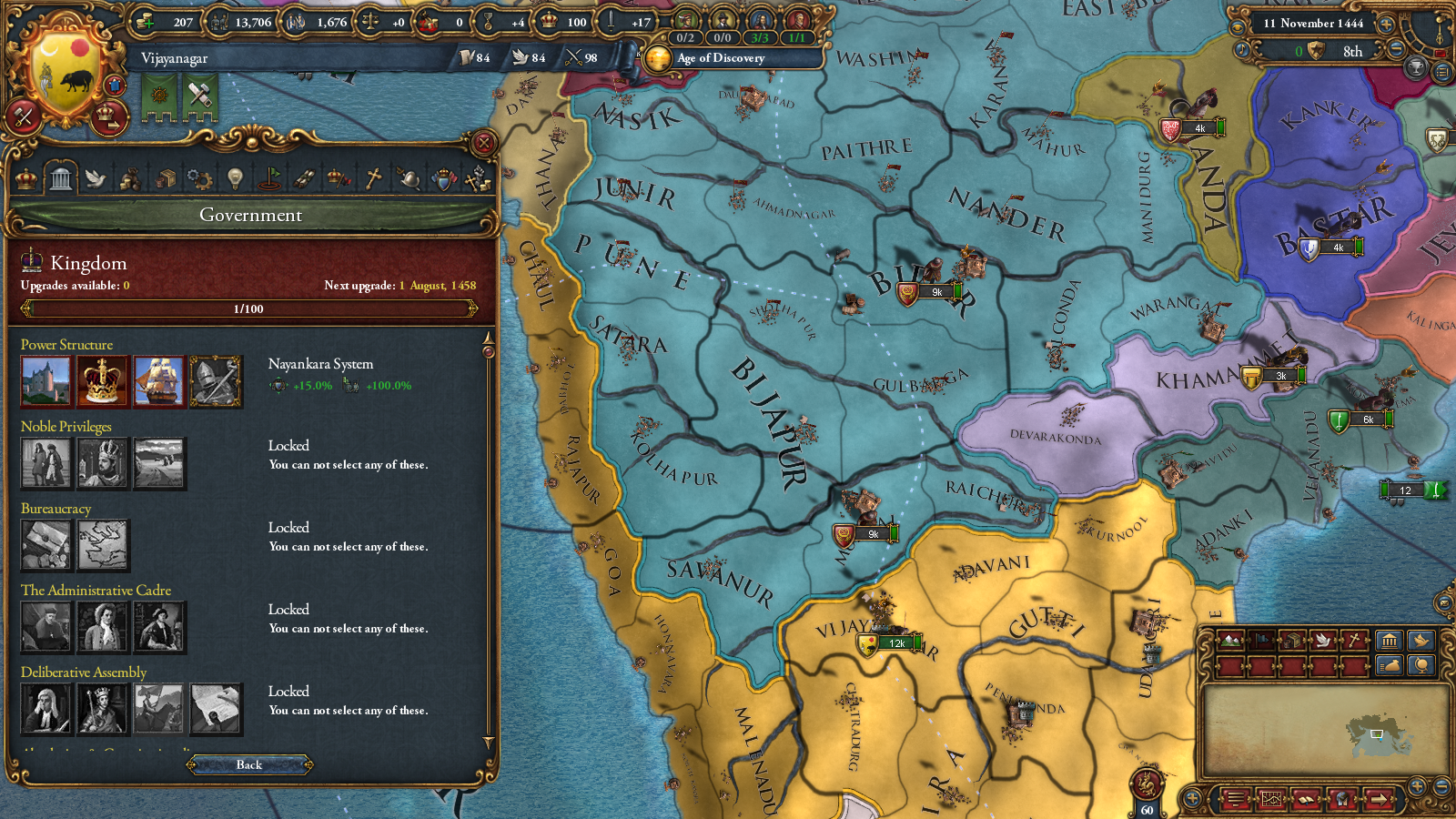 In 1444 there are two dominant powers in Southern India, both with their capitals in the central dry uplands of the region. Separated by the more fertile Raichur Doab between the Krishna and Tungabhadra rivers.

Vijayanagar, the City of Victory, is the center of an empire lead by the Hindu Sangama dynasty, that has been in almost constant conflict with the rival Bahmani sultans in Bidar, over the last hundred years without a clear winner.

Recently, with the sudden takeover of Orissa by Kapilendra Gajapati, a third player has also begun to involve themselves in this struggle. Defeating both Bahmanis and Vijayanagar, it would come to expand through Andhra and Telingana as far south as the Kaveri river.

As a Muslim sultanate in the far south, the Bahmani state is in some ways a frontier state, and one in a precarious situation. Having broken away from Delhi one hundred years prior, it has had to rely on importing both men and horses through its Indian Ocean ports, but these have been lost to the Vijayanagara Rajas since 60 years. It has also had deep structural problems with factionalism, where western immigrants, Gharbians, compete for influence with native land holders and second generation muslim grandees, the Deccanis.

In Patch 1.26 this region has seen considerable division to its provinces to better capture the details of the great struggle here as well as to better cover the geography in general with features such as the open Raichur Doab or the Jungle Desh upland in the west being more defined features. So that the latter can be the base it needs to be for the Marathas later on.

The Tamil Country and Malabar Coast:​ 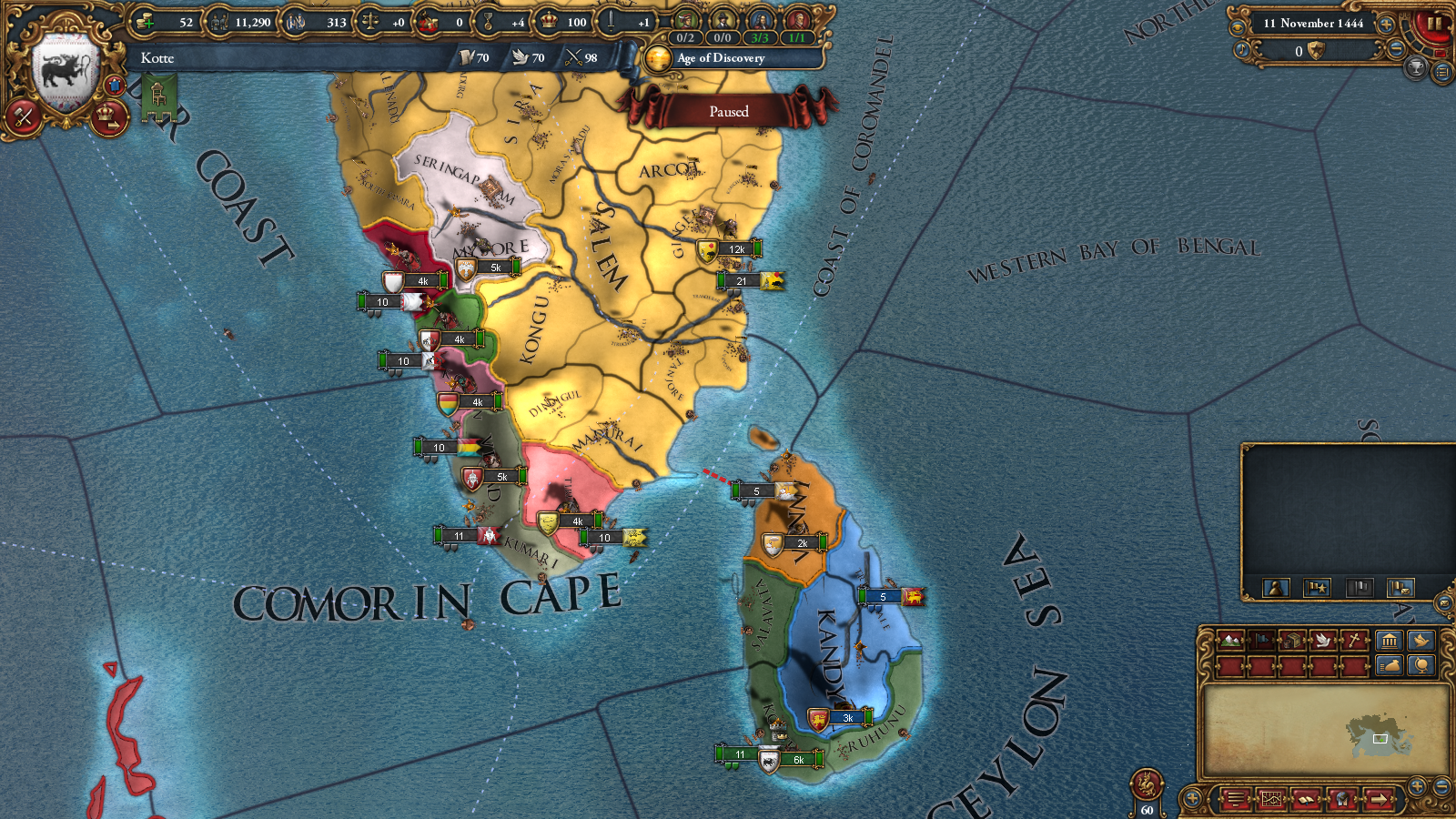 While the far south looks to be dominated by Vijayanagar, the Tamil country, despite still being recently conquered in 1444, is far richer than the dry upland that makes up the core of the empire. Consolidating the south took many years historically as the Tamil trade cities had strong economical and political influence still long after the conquest of the region.

When revising this region we have taken care to give a better overall picture of both the political geography and the landscape itself. The rich Coromandel and Malabar coasts have been broken up into a number of small coastal provinces both to better show the nature of this rich trading coast, and to allow for more places where a European state can gain a foothold. In real life a great number of European powers would gain colonial possessions in this region, from the more famous British and French colonies to less known colonizers such as Denmark and Sweden.

We have also taken the opportunity to further subdivide the island of Sri Lanka, which is now home to three different competing countries in 1444. 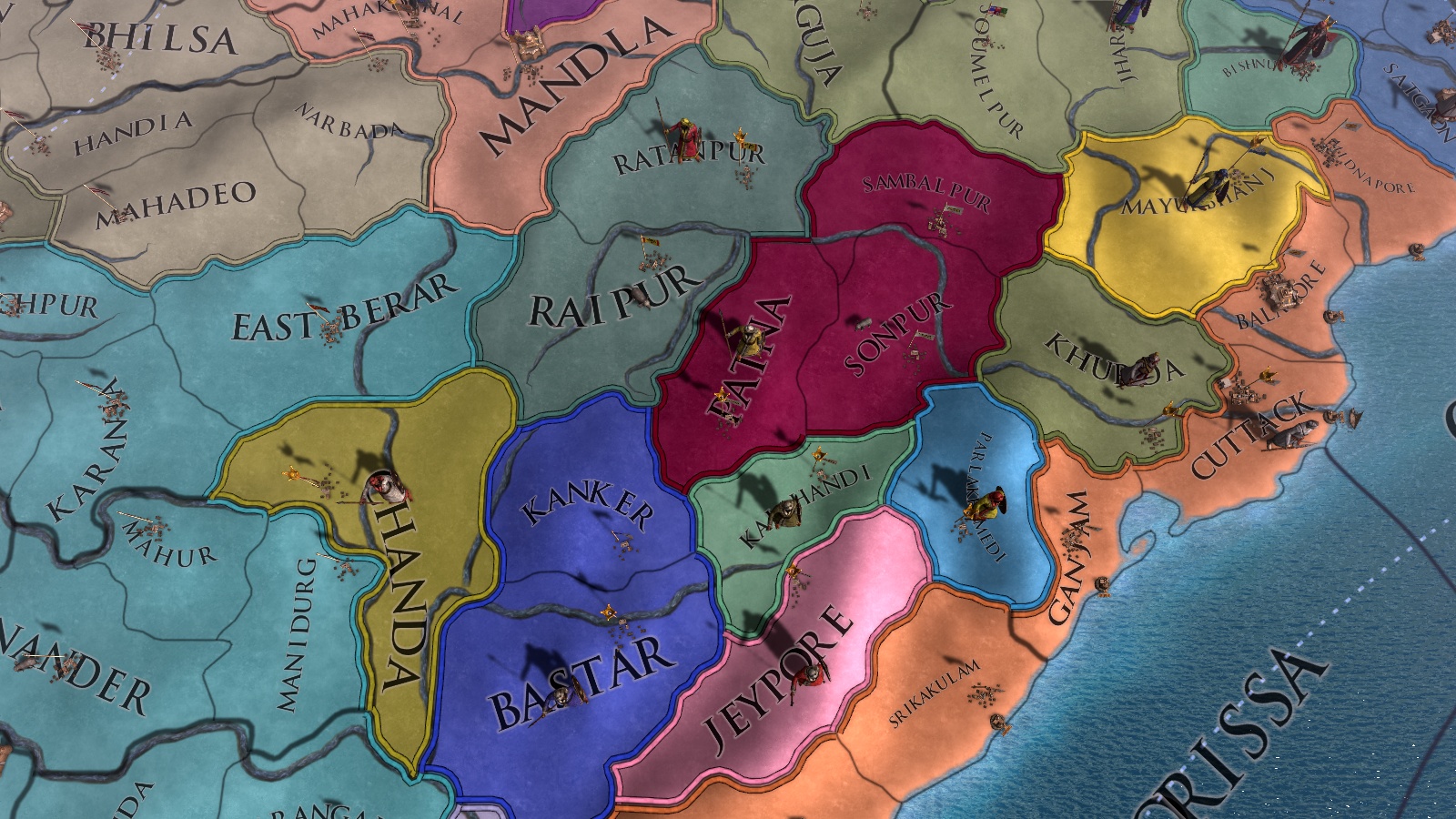 Perhaps one of the most interesting powers in 1444 is Orissa. It’s new king Kapilendra Orissa has gone from a regional leader to an expansive power. Able to project power in all of eastern India. As the game opens Orissa has just won a war against a northern alliance led by Jaunpur and is now looking to the south to expand along the Coromandel coast.

In 1.26 we have taken the great “Garjat” country, that used to represent the various tribal principalities subservient to Orissa, and broken it apart into some of its constituent parts. It is not really possible in a game on this scale to cover all states in this region, as many were much smaller than an EU4 province, but the new setup should more adequately show the nature of Orissas influence over the Garjat region. A ‘swarm’ of vassal armies will now also accompany any Orissan offensives, allowing to to perform some of the feats it was historically able to pull of, while also letting us portray how vulnerable Orissa itself would have been to an attack on its core areas.

That was all for today. Next week we will be looking at northern India as well as the new trade node setup for the entire subcontinent!
Click to expand...

BUMP due to forum bug.
Toggle signature
No fighting in here! This is the war room!

Honestly not sure what I like more: the work you’ve done, the vindication over my detractors of calling it a week ago, or winning my bet and getting the expansion for free. 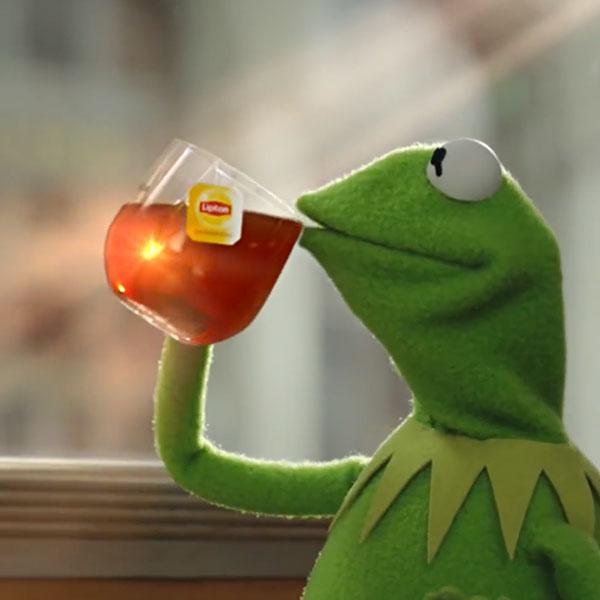 Excellent map updates, @Trin, eager to see what all India is getting mechanically and I’m excited for Mughals-Marathas to get some attention (assuming they do). Mentions of the EIC and said countries make me confident though. Can’t wait for the remaining diaries
Toggle signature
Ideas to Improve Golden Century
Disappointing Accomplishments in EU4
"If you don't want fantasy nations why would you suggest Belgium?"
"Glorious tent-living master race cared nothing for the cries of the filthy house-peasants" - @Fishman786
C

Thank god almighty free at last, India was my second guess but sad because I just finished a Mughals run

Oof, India. Will we at least get a rework to Trade Companies?
Toggle signature
My Suggestions for Improving League Wars: https://forum.paradoxplaza.com/forum/index.php?threads/reworking-league-wars.1058893/

'Patna' would be very confusing...

@Trin Tragula any chance we could have a look at the trade goods?

AlexandruRadu said:
Will we at least get a rework to Trade Companies?
Click to expand...

With the specific mention of the EIC I think they will at least get a look
Toggle signature
Ideas to Improve Golden Century
Disappointing Accomplishments in EU4
"If you don't want fantasy nations why would you suggest Belgium?"
"Glorious tent-living master race cared nothing for the cries of the filthy house-peasants" - @Fishman786

106 New Provinces? Wow. Glad to see India's finally getting the improvements it deserves.

AlexandruRadu said:
Oof, India. Will we at least get a rework to Trade Companies?
Click to expand...

Oh I forgot, it was added in another DLC. Yeah its not getting fixed is it.
Toggle signature
My Suggestions for Improving League Wars: https://forum.paradoxplaza.com/forum/index.php?threads/reworking-league-wars.1058893/

Waited for a long time

Yay!
Toggle signature
Still salty about the end of the Third Punic War...