Hello and welcome to today's development diary for Europa Universalis IV. It's actually a well earned(?) day off for me but I'm doing a once unthinkable thing and working a bit from home. Last week I said we would take a look at a very influential dynasty of the time period. Sorry to disappoint all the Velikopermsky and Dandani fans out there, but I had the Osmanoglus on my mind.

It would be an understatement to say that the Ottomans gave the world a good shaking in this time period. Furthermore, they are one of the more commonly played nations in EUIV. We wanted to give them a little something to bring out their unique flavour since it was always a shame that they are a run-of-the-mill Sultanate. It has also been pointed out on numerous occasions the oddity of a situation where you have the Ottoman nation..without an Osmanoglu at the helm.

So to that end, in the still-unnamed upcoming expansion we have added a unique government type for them: The Ottoman Sultanate.

The Ottoman Sultanate does not generate heirs like normal monarchies do. The ruler of the Ottoman Sultanate will have their own Harem to ensure the dynasty lives on. At the age of 30, your ruler will select one of his sons to be the heir to the throne. They will, of course, be of your dynasty 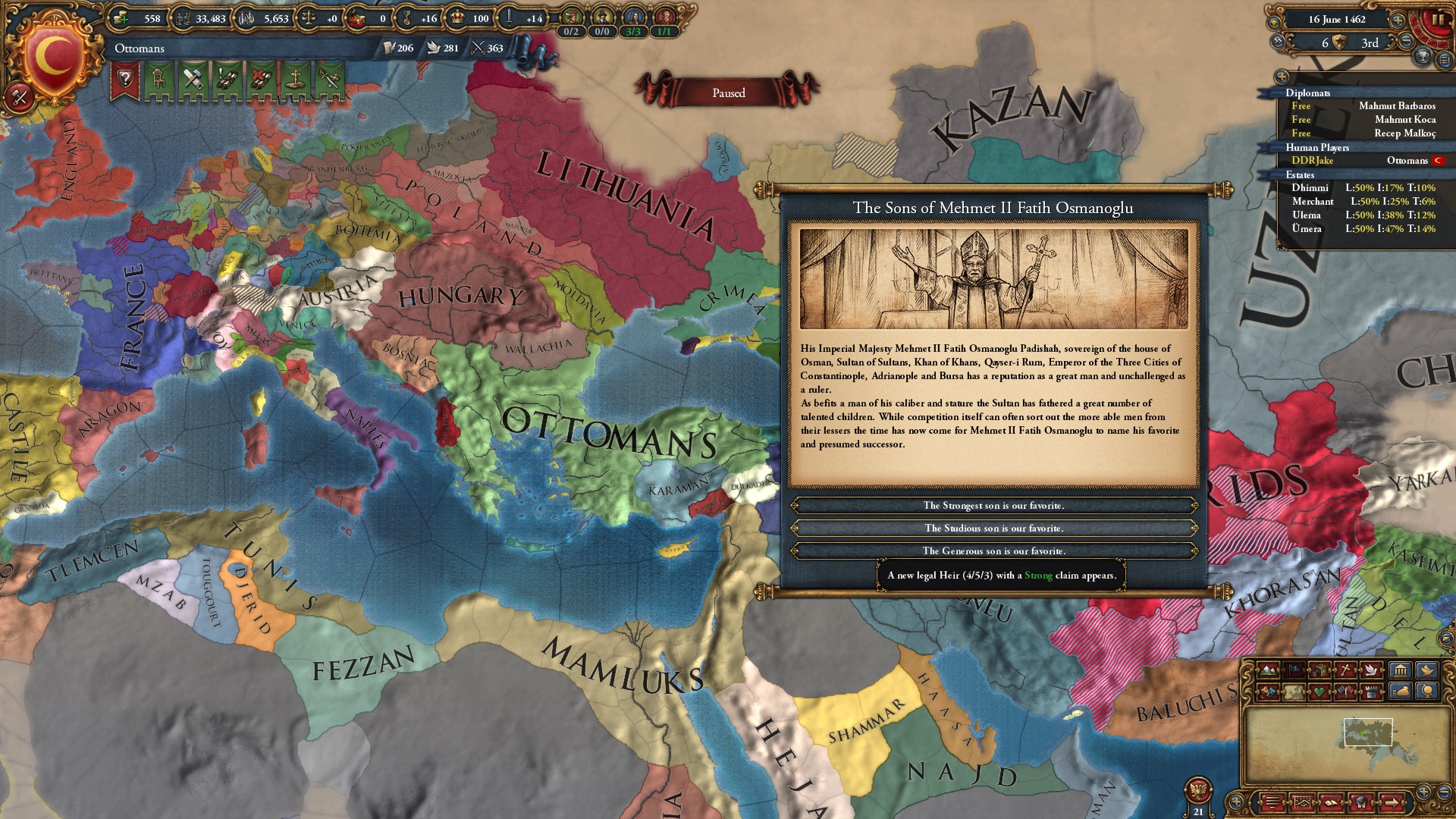 So an Ottoman Sultanate shall always be blessed by the strong line of Osmanoglus. That is to say unless the Sultan dies without an heir. In that case, they'll still end up with an Osmanoglu. "Blessed" can be a relative term here. 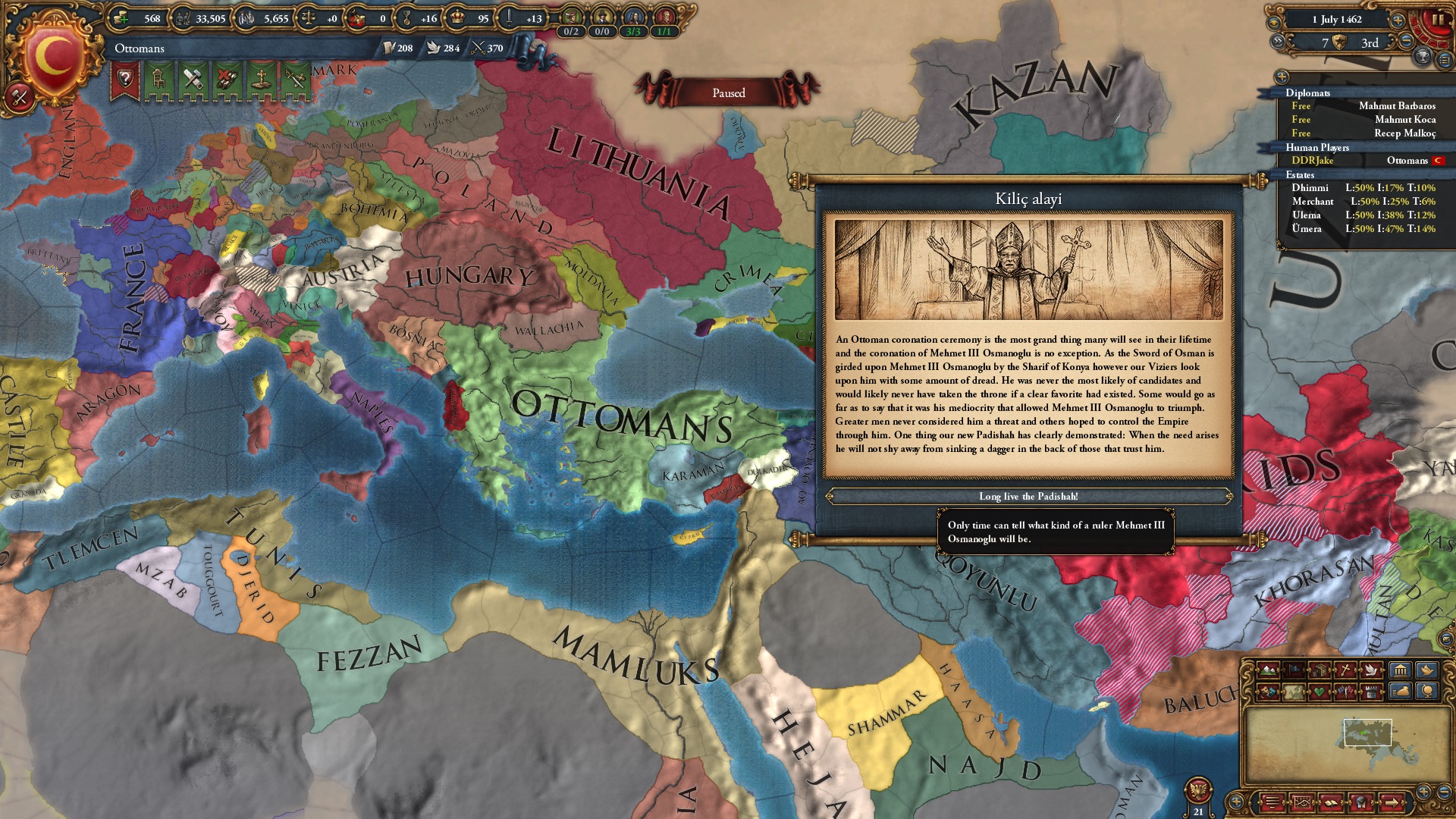 There are a couple dozen events accompanying this unique government type to simulate the power struggle and intrigue of such a succession system and should add a couple of fangs to that already formidable Ottomans.

While this is unique to the Ottomans, any modders out there can easily allow this for other government types with the has_harem = yes line.

I feel like we're on a roll when it comes to governments and rulers so here's another thing for today's Development Diary. Abdication.

Yes, it has long been a requested feature in Europa Universalis. When Enrique or his low-stat kind just refuses to die you can abdicate and let your next in line take over. This requires you to have an of-age heir and to have either ruled for 25 years or be 60+ years old. It will come with a considerable hit to your legitimacy/unity and prestige but I think we've all had times where we wanted our monarch to Die Please Die. 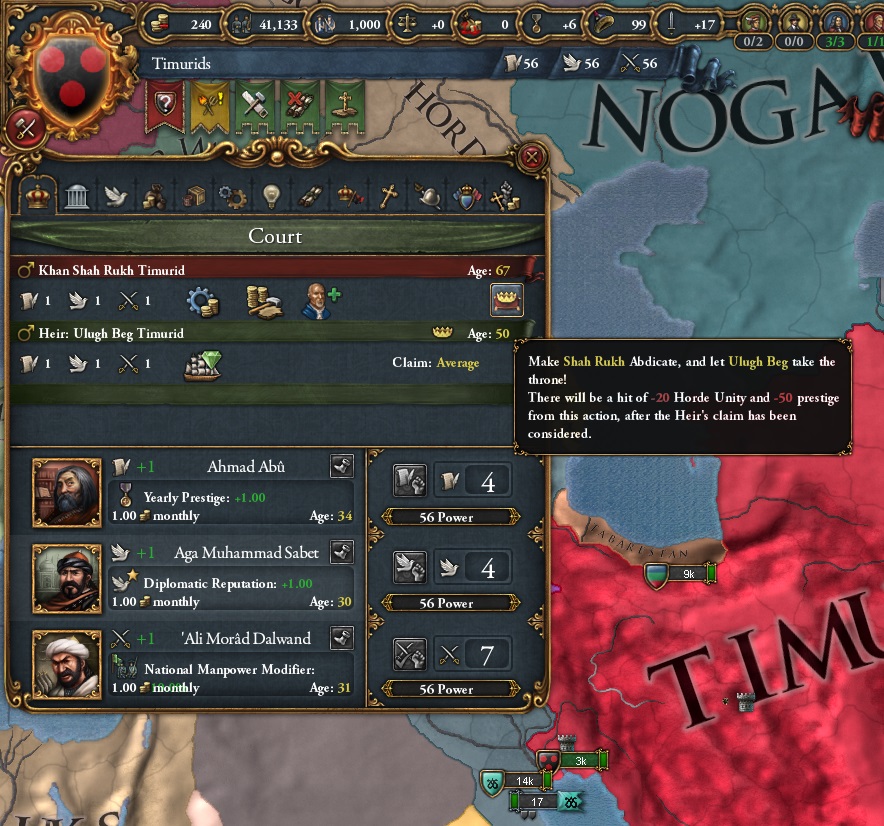 Ottoman Sultanate and Abdication are both paid features in the upcoming expansion which we have magically managed to keep unleaked name-wise.

I've been mentioning a lot of paid features lately but it's good to remind ourselves that with all the paid expansions come free bugfixes and features from the accompanying patch. A small change that will be coming up in 1.18 that I want to share is to do with succession wars. I'm not too happy with how right now, they have two conclusions: Either the new overlord keeps their union or the nation fighting them over it take leadership over the union for themselves. Now, we will add a peace option which simply breaks the union for all parties involved. 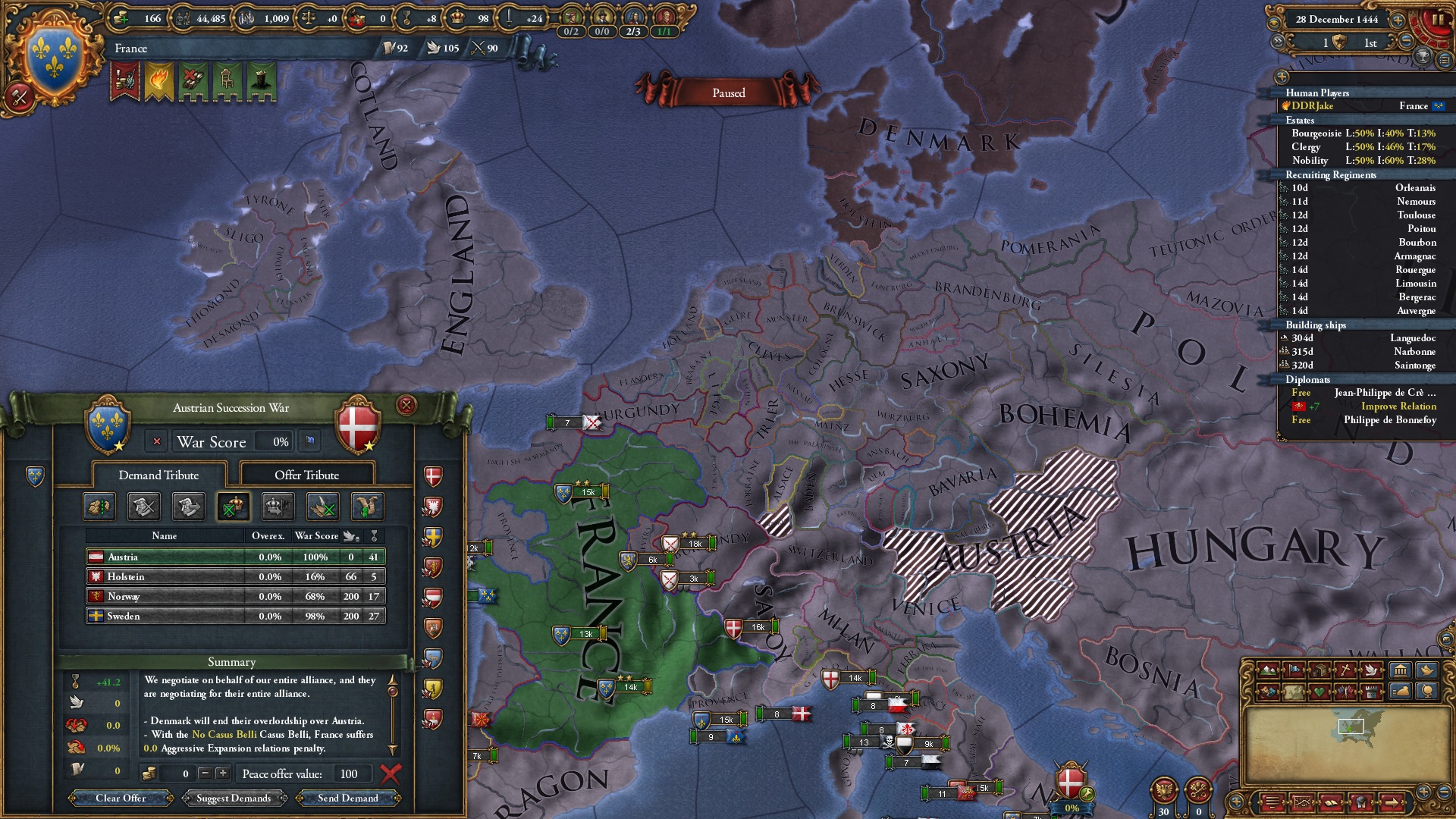 Simple, sensible, and added free in 1.18 for those times where you just want to keep the status quo. Warscore cost scales with the junior partner's size.

Happy midsummer everyone, I'm off to....oh, right, I need to tease upcoming Diaries. Hrmm~ Well, we've touched a lot on rulers but would you believe it, we're not quite done with the changes in the throne room. We'll come to that in the future. As for next week, we'll switch it up on the battlefield. See you then!
Last edited: Jun 29, 2016
Reactions:

This stuff looks very good !
But why would you break the union if you can have it yourself ?
Toggle signature
Dr. Klen'Moral Observations on the effects of isolation on Hive-Minded drones - A Stellaris scientific report

Just when I started an ottoman game to wait for the next expansion. Now I'll have to shut it down.
Reactions:

Looking forward to the Ottoman government type. Pretty much the only nation I don't lose as.
Toggle signature
Hippity-hoppity your land is now my property
Map of monuments: https://eu4.paradoxwikis.com/images...onuments.png/1920px-Location_of_Monuments.png
Development mapmode change: https://forum.paradoxplaza.com/forum/threads/change-the-development-mapmode-colours.1470596/
Reactions:

Historical flavor! Great, since it's been missing a bit lately.
Reactions:

3.Abdication :O That was sooo needed. I wonder if you can abdicate as a Theocracy/Republic/Papacy.

3. I see some nice UI Improvments. Like the Advisor bonuses icons or the action of diplomat showing (or was it that way?).

Awesome features!
Really makes me want to get back into EU4
Ive put it away for now though while I play Stellaris 1.20 beta (Just finished a "nobody expects" achievement run in HOI4)

The new tech system is what interests me the most (I'm aiming to play my first Ming game once 1.18 is released! After more than 1200hrs in EU4)
Reactions:


DDRJake said:
At the age of 30, your ruler will select one of his sons to be the heir to the throne.
Click to expand...

Looks great - but I hope the event gets its own artwork, not that of a Pope.
Reactions:

Yeah, new event pictures are not done yet
Toggle signature
No fighting in here! This is the war room!
Reactions:

LeSingeAffame said:
This stuff looks very good !
But why would you break the union if you can have it yourself ?
Click to expand...

if it's too costly to win enough to get the union you can end with it cancelled instead.
Reactions:

It would be nice to have a succession war within your country and you pick which king you want to rule then fight off the pretender rebels
Reactions:

LeSingeAffame said:
This stuff looks very good !
But why would you break the union if you can have it yourself ?
Click to expand...

I think it'll be a cheaper/more easily accepted deal. Also, the possible subject could be a potential nuisance if they are too strong compared to you (meaning they'd have a high liberty desire).
Toggle signature
Meow.
Reactions:
S

ImpBattery said:
So, if you die at 29, you have no heir ? Could it rather be a bit random ?
Click to expand...

You don't but you still get an Ottoman successor (see the second picture).
Toggle signature
No fighting in here! This is the war room!
Reactions:

The last of his Dynasty

Martinus said:
Looks great - but I hope the event gets its own artwork, not that of a Pope.
Click to expand...