Hello everyone, and welcome to another development diary for Europa Universalis IV. This time we take a deep look at something different we’re doing for 1.18. This time we are adding and improving features to four different older expansions.


First our is a new feature for Mare Nostrum, called Create Trading City! Now the Merchant Republics that has a Trade League will be able to create a new one-province-minor out of one of their provinces. This new nation will become independent, but part of their Trade League, and they will never leave that Trade League on their own. A Trading City is created from the province view like Client States are. You can decide upon name, shield and color just like creating them.


An AI Trading City will not expand, and there can only be one Trading City in each Trade Node for a Trade League. The government form of a Trading City is a republic with +33% Caravan Power & +10% Trade Efficiency. 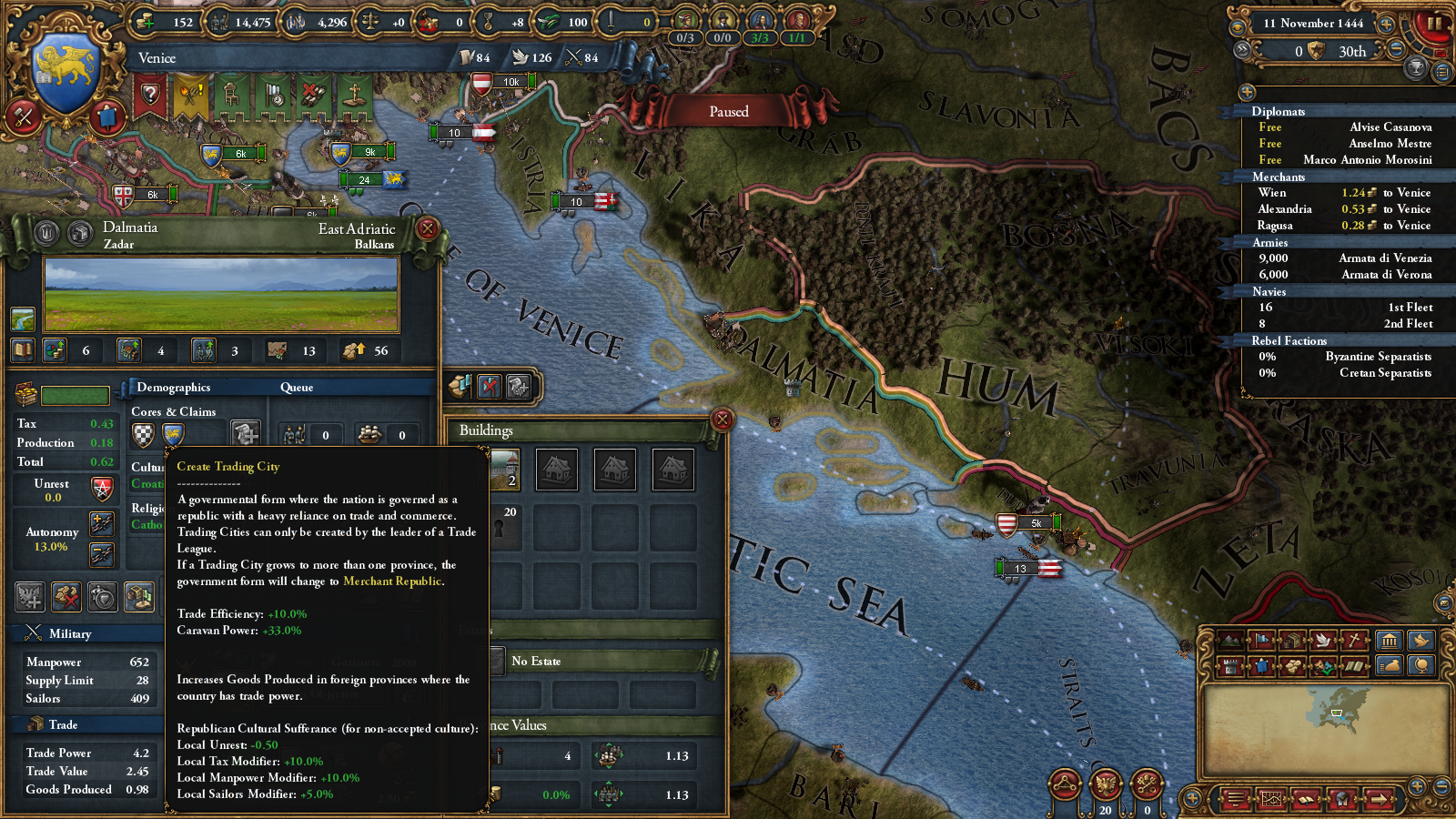 The second feature is for El Dorado, where we have improved the Nation Designer. In 1.18, if you own both Rights of Man and El Dorado, you will now be able to define which personalities your ruler and heir has from the start. 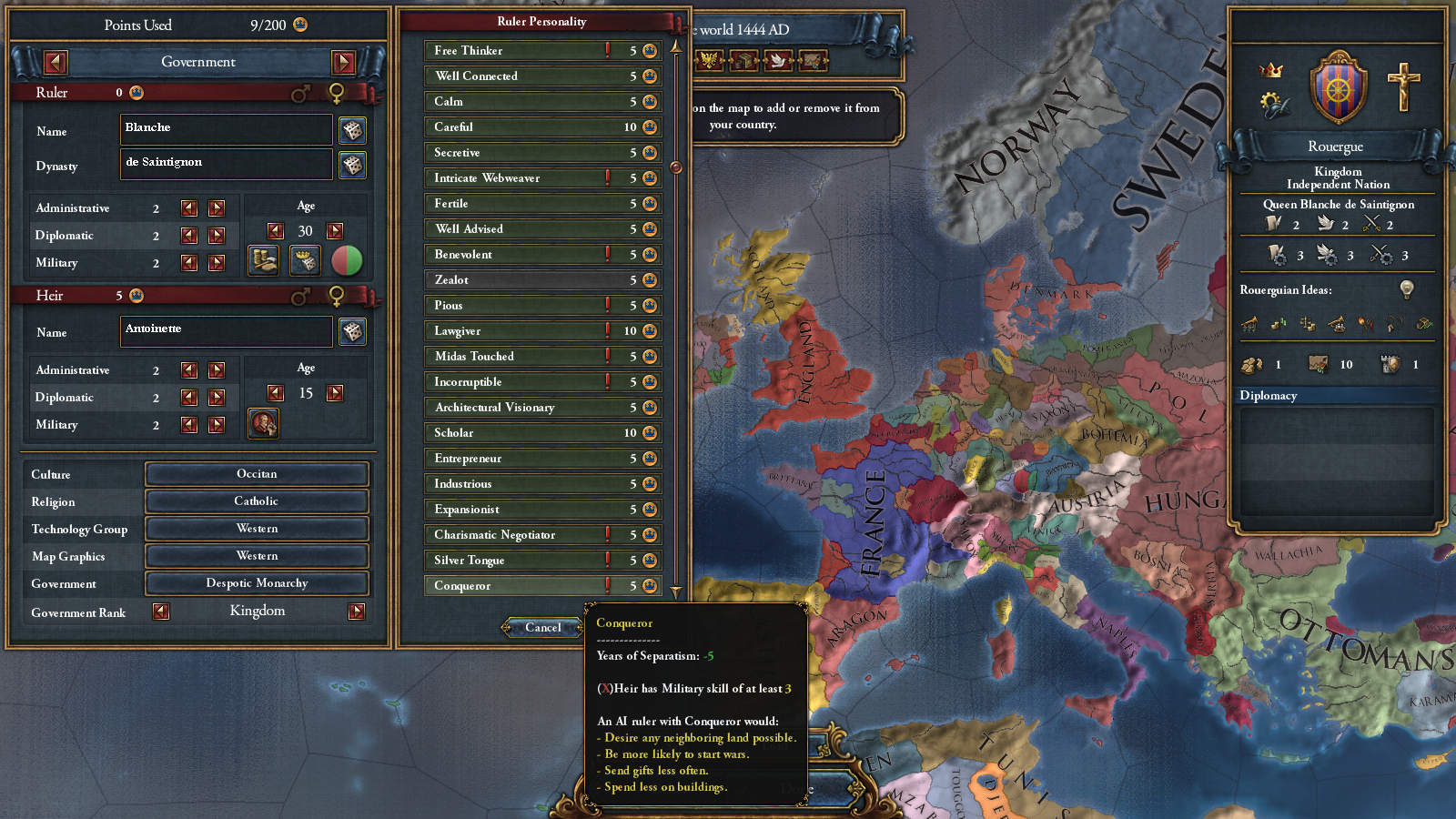 The third feature is for Common Sense where we replace a feature that was obsolete, the Pause Westernisation option. Instead, owners of Common Sense will be able to have a better control of their institution spread when they increase development in a province. Increasing a 30 development city by 1, gives +5 to Institution Progress of the oldest institution not present in the province. It scales to +10 at 60 development, and down to +0.5 in a 3 development rural backwater. 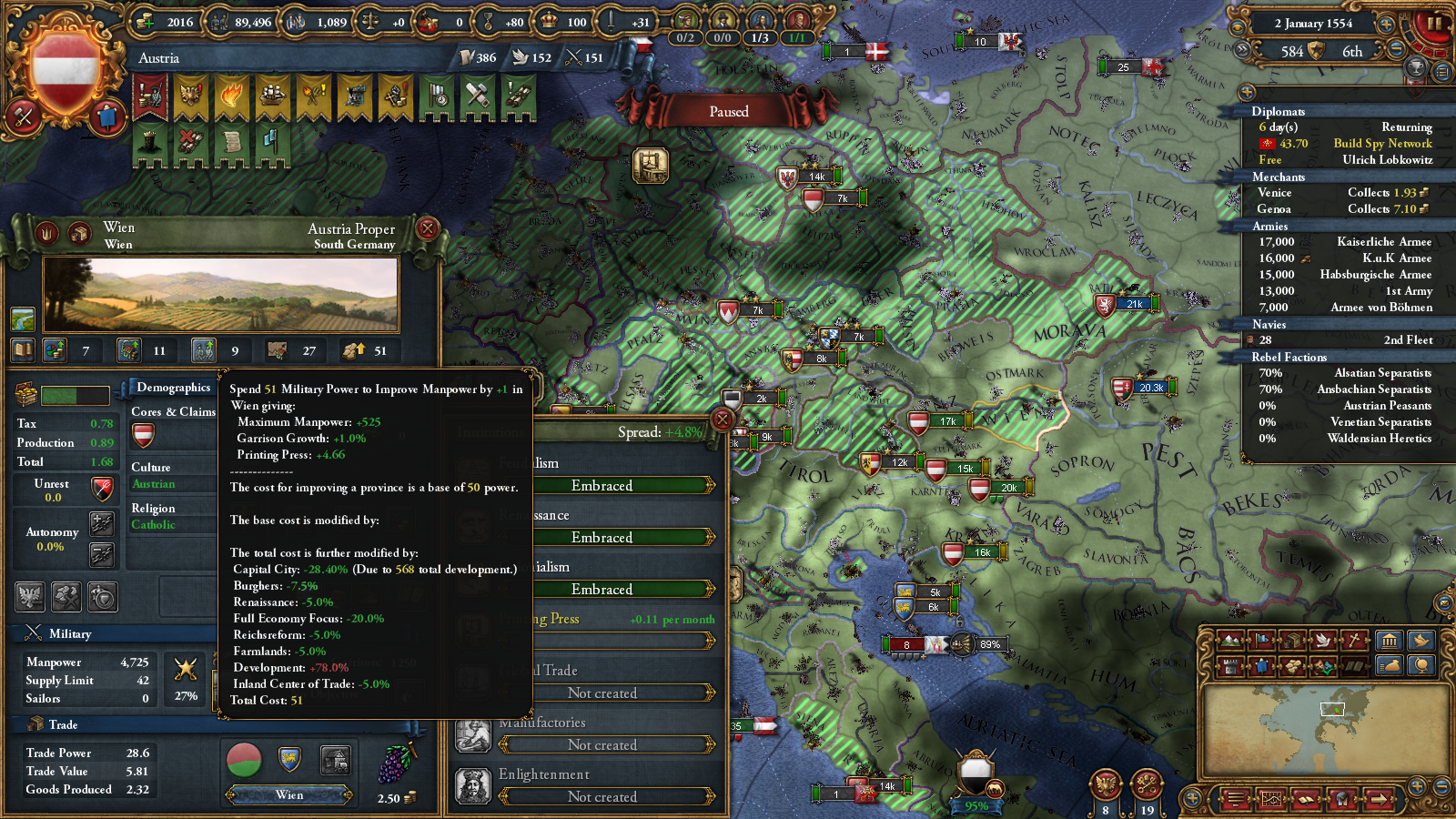 And our fourth feature mentioned today Random New World from Conquest of Paradise. In 1.18 we’re adding lots of new tiles, increasing the total by over 37%. There are some tiles that are big enough to be a double-continent, like this familiar and fun territory. This tile was created by community member @Elzephor !

Of course, we’ve done quite a bit of bug-fixing, balancing and AI improvement to previous features. Next week, On TUESDAY, we’ll talk about launcher and multiplayer improvements.
Last edited: Sep 22, 2016
Reactions:

This, Patch/DLC could dethrone: The Art of War
Reactions:
V

Morocco is sieging fort in Ceuta and Portugal is attacking from sea.
Who will give penalties (or maybe both: -2 portugal from sea attack and -1 morocco from sieging highlands)?

But what's the use for Trade Cities?
Toggle signature
Son, let me tell you how the world works.

Arklari said:
Will this include, for instance, the ablity to independently develop feudalism/renaissance in the new world without reforming from a western neighbor?

Seems a bit weird as it's worded. It would be pretty cool if you could do that though by building up a 60 dev city in the new world.
Click to expand...

That's the intention, yes. In the dev streams, AI Ming, Korea and Japan (plus a number of provinces in central India) all had their own renaissances, in addition to player Muscovy and I think Luba. From what I gather, you can only do this when an institution has spawned, so you can't have the Birth of the Renaissance be in Korea, but you can independently have a Renaissance (or invent Feudalism or the Printing Press, the other Institutions seem less grounded in Europe, colonialism and global trade especially.)
Reactions:

Any plans to improve Trading Companys?

I would love for them to become our trade specialised AI subject, like the British East India Company, where they have their own troops etc. Having AI trade cities looks like a step towards this!
Reactions:

Do we get female "heirs" for republics/orders and so on now? or is that something that will not happen outside mods?
Reactions:

Nordlund said:
Do we get female "heirs" for republics/orders and so on now? or is that something that will not happen outside mods?
Click to expand...

Women, in /my/ democracy?!
Reactions:

Is there only one trade city per node or per trade league in each node?

Ex: Venice and Genoa have separate trade leagues. Can they each have a different trade city working in Genoa node?
Reactions:

Now we need an achievement for owning all of the falklands tile as La Plata.
Toggle signature
The game I'd love to play, if Paradox ever made it, (and a little extra detail).

"Identity Politics" is an euphemism for "Civil Rights", and "Political Correctness" one for "being respectful of other people".
Reactions:

SolSys said:
1. Someone else who is eligible to become head of the trade league will replace the old head [if that's what you meant].
2. Trading cities will belong to your trade league which takes only one relationship slot.
Click to expand...

I didn't know about 2, never played a Merchant Republic. But about 1, I mean do they still exist as your vassals? what do you get from them then?

crowdemon said:
Or maybe you seen the future hehe
Click to expand...

Or he follows Johan on twitter where all this was already shown to us.

Spiritraiser said:
I didn't know about 2, never played a Merchant Republic. But about 1, I mean do they still exist as your vassals? what do you get from them then?
Click to expand...

Lord_P said:
But what's the use for Trade Cities?
Click to expand...

Mo-ney. You put them downstream of you, and they push trade from further away to their node, where you presumably have majority of the power. +10k free manpower + >6k free troops for defensive wars. Right now it's feasible to get a trade league of around 10 states - that's 100k manpower and at least 60-70k troops counting towards your relative strength when AI is deciding whether to attack. With Trade Cities number goes up. They will also develop their provinces, giving you passive growth of trade power.

Plus it's probably good for colonizers - Merchant Republics can't let their colonies grow to big, considering their limitation on 20 core provinces. If you give the best colonial provinces to Trade Cities you get to keep the Trade Power, while not hurting relative strength of your colonies.

Giving away good TP provinces as Merchant Republic isn't as bad, as you can setup one trade post (+10TP) per trade node and compensate this way.

Soulburger said:
Is there only one trade city per node or per trade league in each node?

Ex: Venice and Genoa have separate trade leagues. Can they each have a different trade city working in Genoa node?
Click to expand...

@Johan Are you guys considering increasing the number of provinces allowed in the RNW? Todays cap of 1024provinces per tile limits the opertunities a bit.

Actually, now that I think about it, is it entirely possible to have Trading Cities in the New World instead of forming colonial nations, though it might slightly limit the amount of trade power you can get from the New World. Indian trading cities might also be a good idea depending on how well they work, though you would get slightly more trading power from owning it under a trading company, so don't know.

v0lliz said:
@Johan Are you guys considering increasing the number of provinces allowed in the RNW? Todays cap of 1024provinces per tile limits the opertunities a bit.
Click to expand...

I guess maybe the achievements will go up in steam soon? Last time someone found them pre-release

NoOneBCE said:
Not to mention the additional troops you get for defensive wars, Imagine having yur trade league expand to 10 opm cities giving you 100'000k troops oon your side
Click to expand...

Not hard to imagine, I'm just playing such a game: 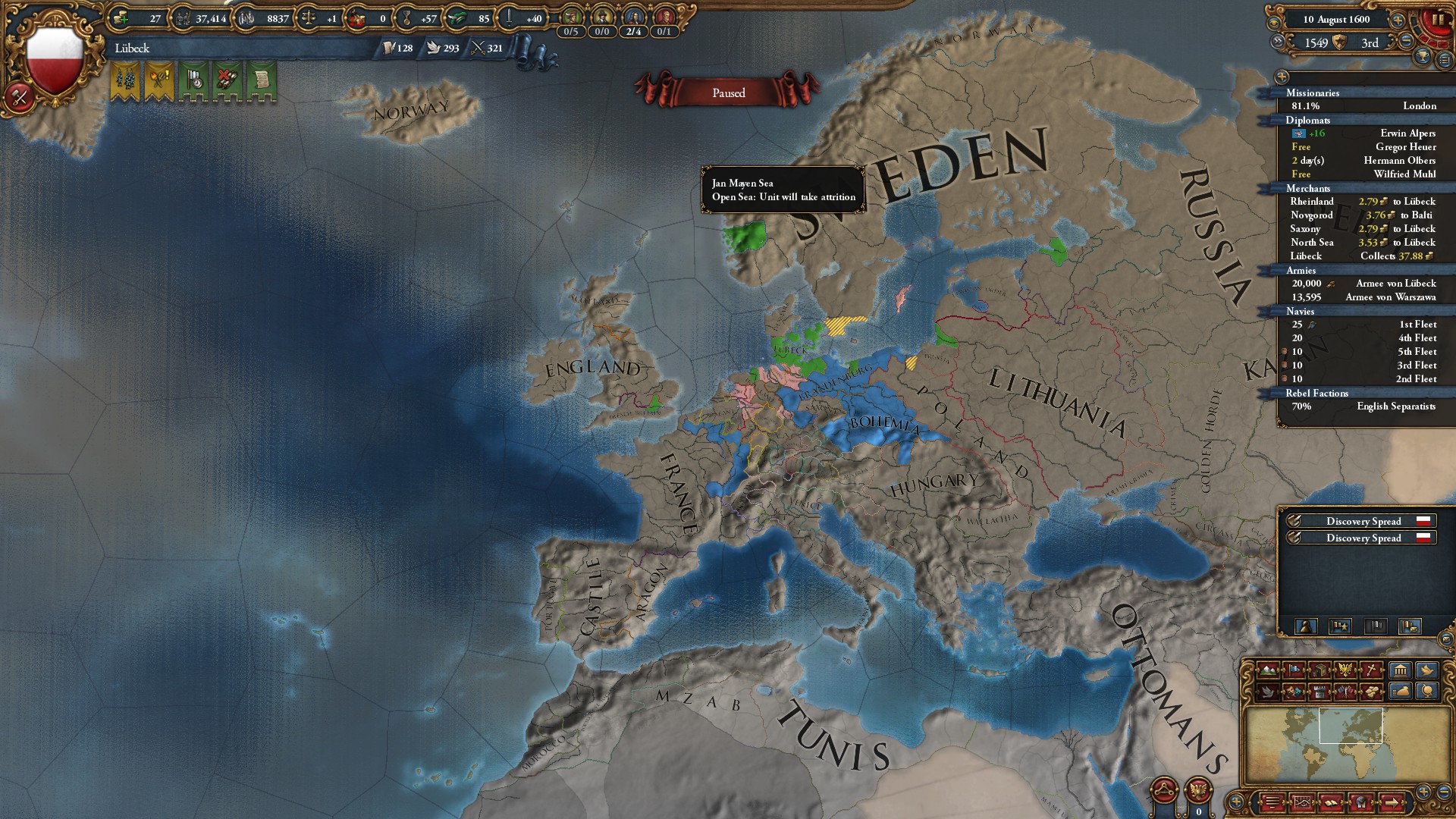 15 members on the league at the time of this screen (Riga and Danzig are allies as well), 14 provinces, 378 dev and 3rd in score.


Of course, this is really not a blobbing campaign.

I agree that it should be a bit easier to get a natural OPM to enter your trade league if you release them in a peace deal. But trade cities are a good way to help creating new members once you have a stable membership.
By the way, DDRJake, trade league members can be really fickle, join at some point and leave a year later without obvious change. No war, no conflicting rivalries and alliances, relations maxed.

I've made a pretty simple suggestion to help with that: Trade league leader will get favours with their trade members. In turn, they can use it to improve their trust and high trust between a member and a leader will mean a member will be much more eager to stay in the league. Any thoughts about that?
https://forum.paradoxplaza.com/foru...rade-leagues-favour-for-trade-members.970226/
Last edited: Sep 22, 2016
Reactions:
Show hidden low quality content
You must log in or register to reply here.
Share:
Facebook Twitter Reddit Tumblr WhatsApp Share Link
Top Bottom