Good morning all, welcome to this week's dev diary for Europa Universalis IV.

Over the past 3 weeks our map aficionado @Trin Tragula has been sharing our latest handiwork over in The Near East, Anatolia, Caucasus and Iran. In addition, we also showed off five new trade goods being added to the game: Livestock, Paper, Gems, Incense and Glass. By popular request, I have a few screenshots to show the distribution of trade goods in our reworked map. 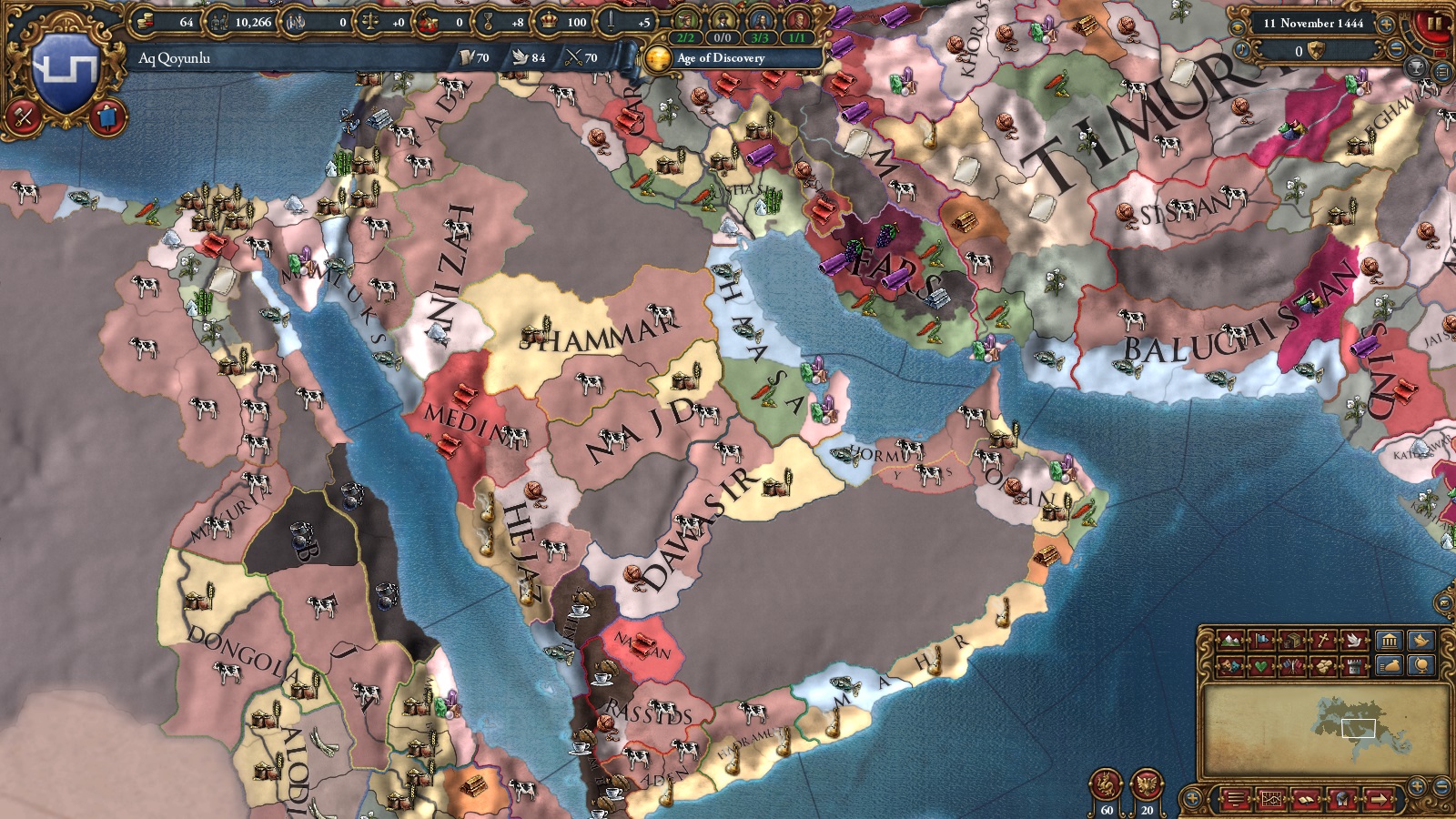 Arabia, complete with a coastline of Incense, while a lot of provinces previously aflock with wool enjoy livestock. 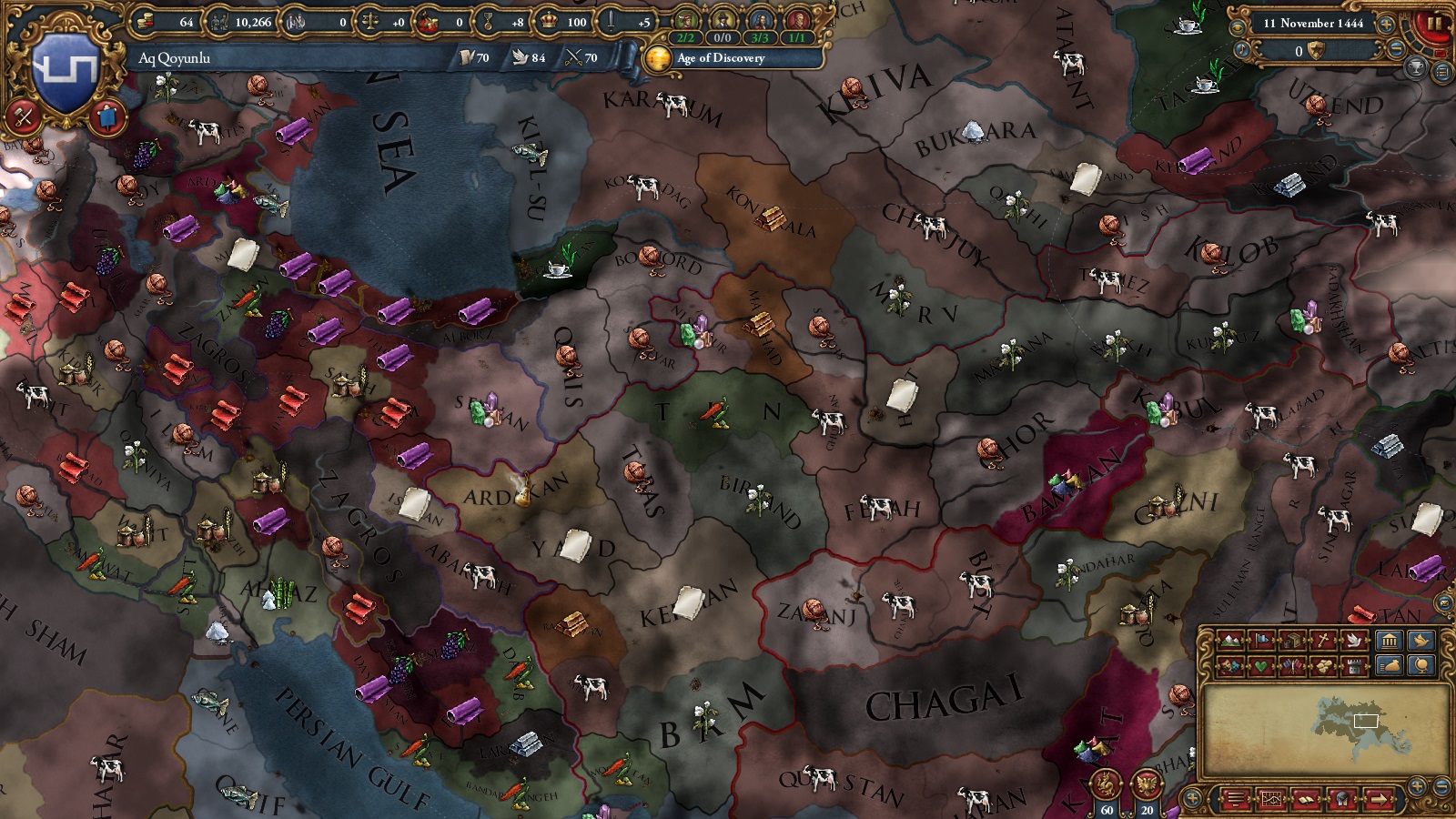 Timur's home has a wide variety of goods, with a handful of gem and paper provinces finding their place 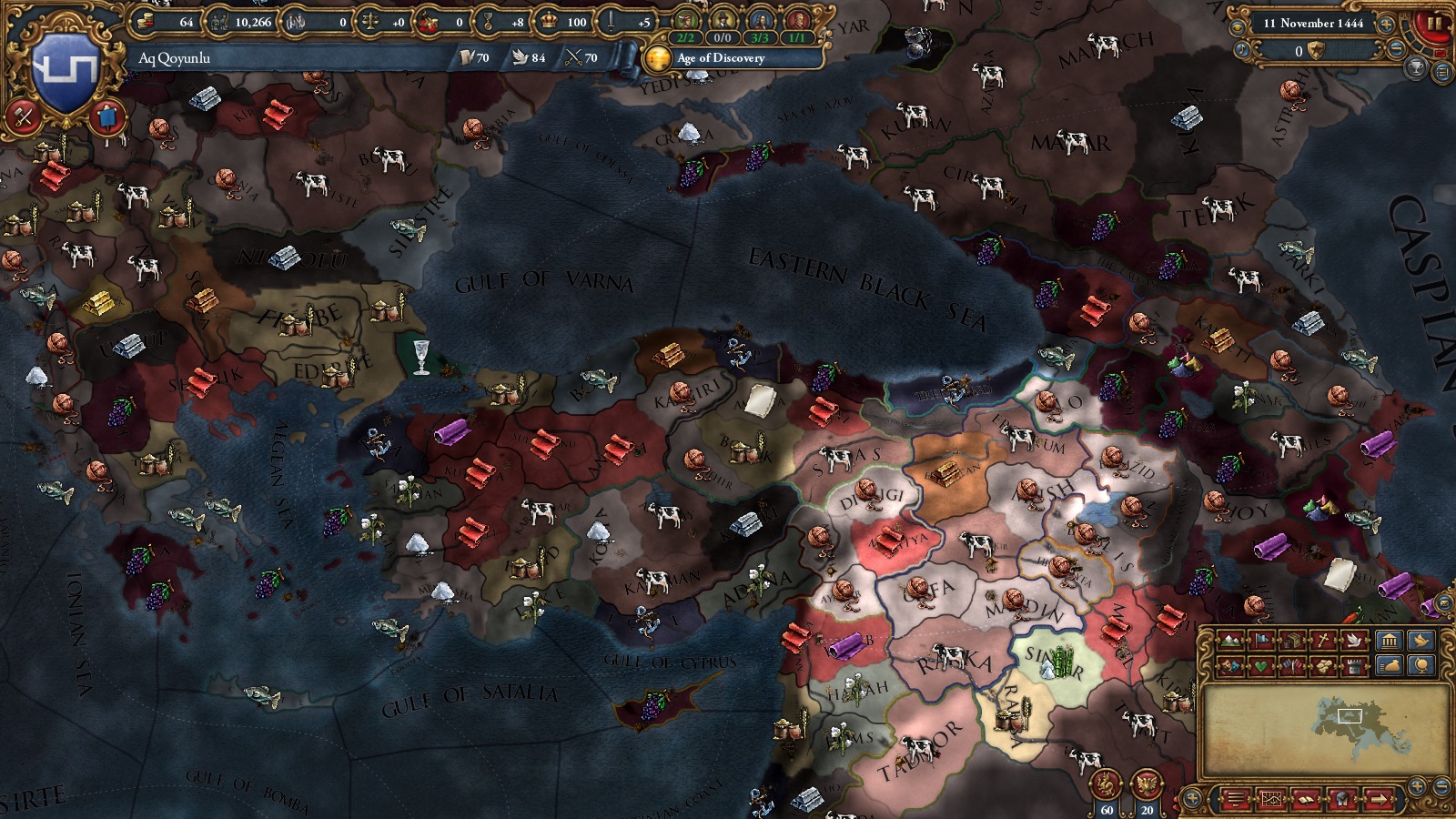 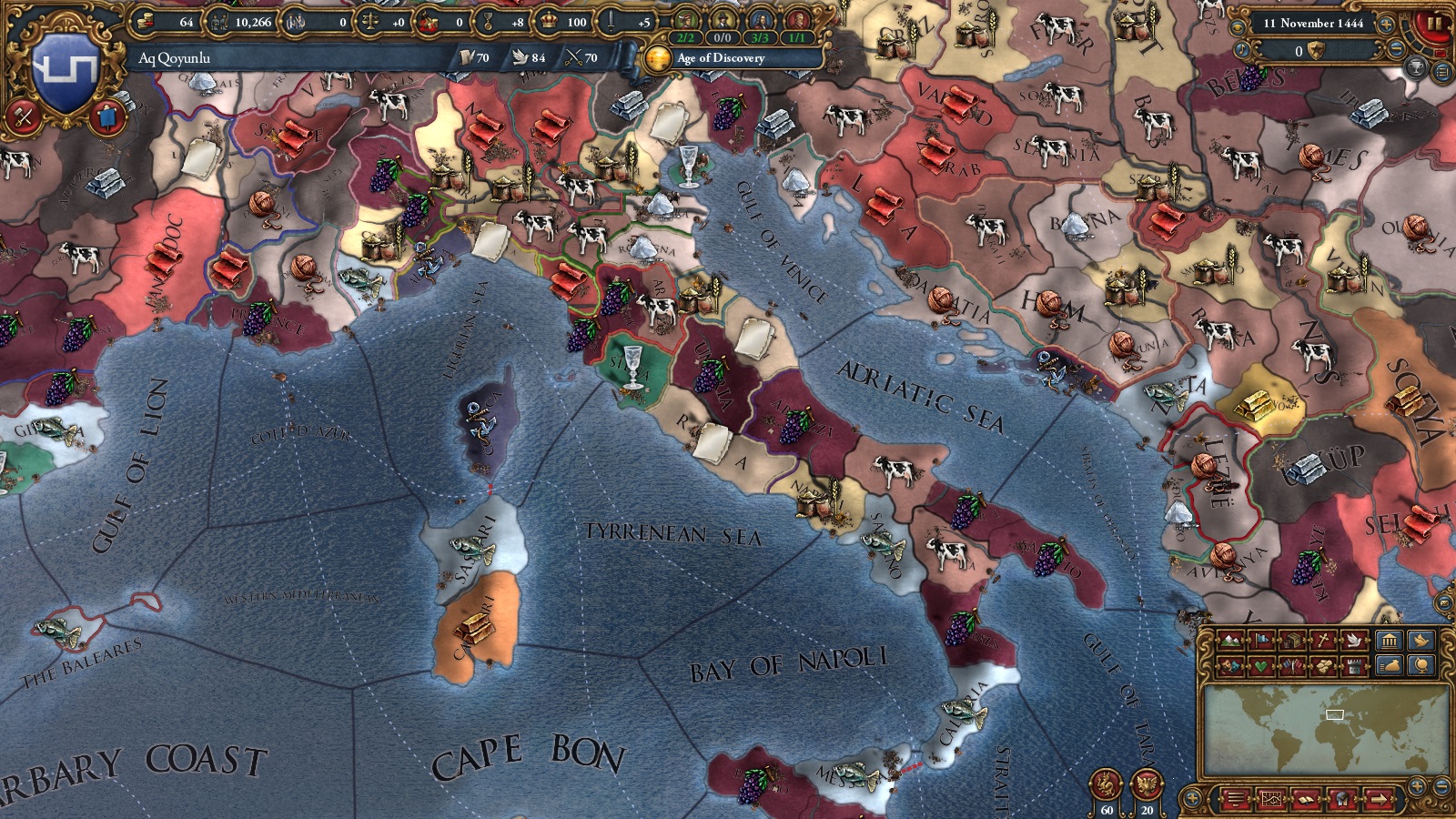 Bonus European shot to bring Italy to light. The already wealthy region enjoying the prosperous goods of glass and Paper, each with their own set of events to alter their prices throughout time. Throughout the dev diaries, we may be showing off other regions where trade has touched, all depending on what people want to see.

These map changes and new trade goods will all be free additions to the 1.23 Update, which will accompany an as-of-yet unannounced expansion, meaning that whether you purchase the upcoming expansion or not, you can enjoy a revamped experience both on the map and in the pasture.


Today we're also talking about the first of the paid features from the expansion, Army Drilling. Currently in the game if you're not fighting and have no immediate threats or rebellions, you slam that military maintenance bar down as low as you can, leaving your armies to eat grass and dull their blades until such time that you pay them to fight for you again. With the addition of Army Drilling, you can pay to have your armies train so that when it comes to times of war or uprising, you can smack down on them with a far more effective force. 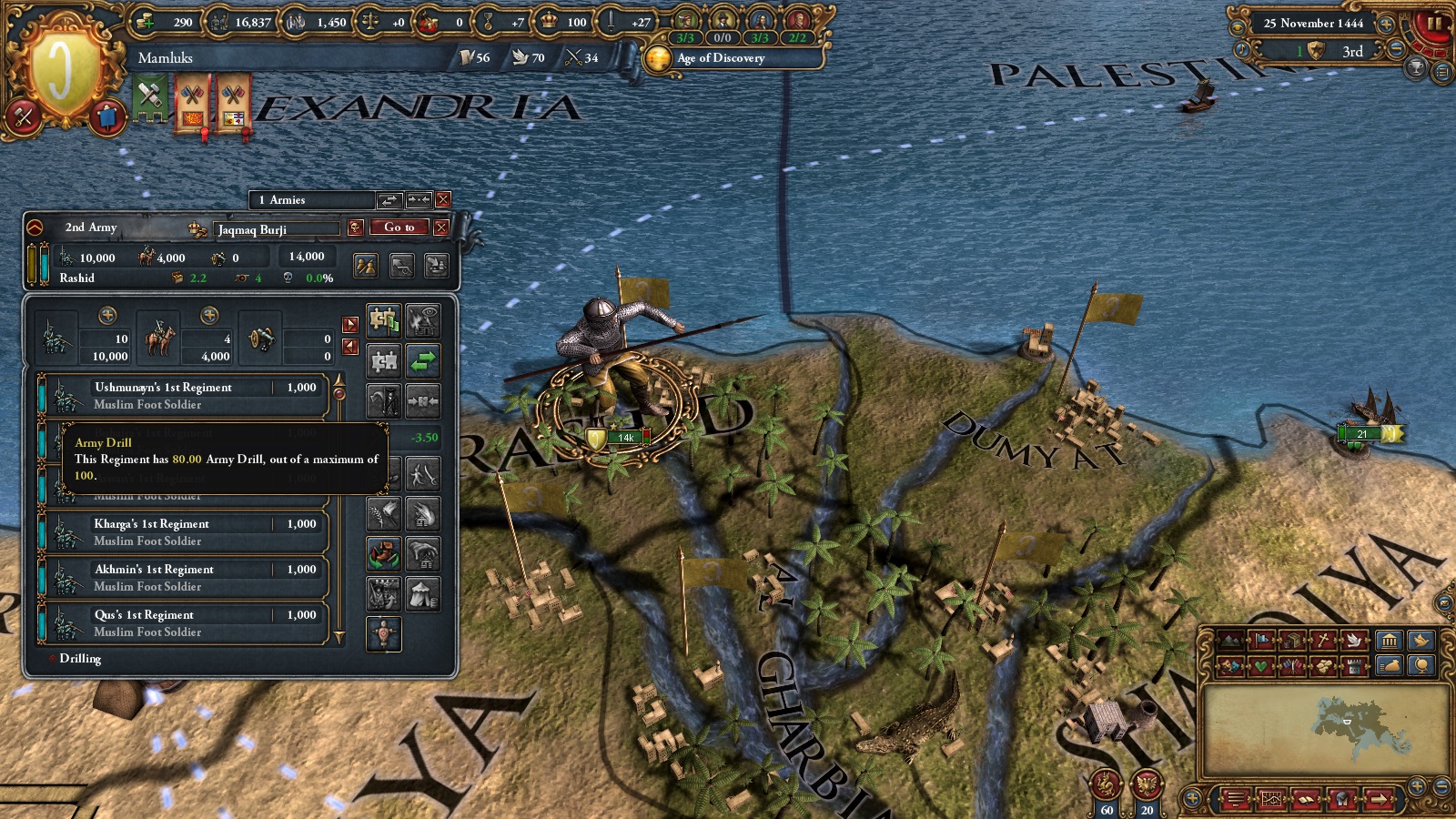 Any Army with a leader can Drill, during which their morale will be lowered and each non-mercenary unit will gain a Drill value. This value will directly correspond to better performance in battle. When not drilling, a unit's Drill will degrade over time, and will suffer if the unit is damaged and must reinforce.

Scaling up to 100, Army Drill gives:
(Army drill gives no effect for Mercenaries)

Drilling requires a leader, but during the Drilling process, your leader may also find themselves improving, and gaining additional pips, so not all is lost for that 0-0-1-0 General you roll. This likelihood depends on how much of your army they are drilling, relative to your forcelimit.

Drilling armies will cost full maintenance, regardless of the budget slider and will contribute well towards having a better, more professional army, less reliant on soldiers of fortune. Next week. We will explore this idea further.

I wonder if Eastern Europe changed much. I remember Konigsberg being mentioned as producing Gems.
Toggle signature
Sit now there, and look out upon the lands where evil and despair shall come to those whom thou allied. Thou hast dared to mock me, and to question the power of France, master of the fates of Europe. Therefore with my explorers thou shalt see, and with my spies thou shalt hear; and never shall thou be released from vassalage until all is fulfilled unto its bitter end.

DDRJake said:
Drilling requires a leader, but during the Drilling process, your leader may also find themselves improving, and gaining additional pips, so not all is lost for that 0-0-1-0 General you roll. This likelihood depends on how much of your army they are drilling, relative to your forcelimit.
Click to expand...

Does that scale with the absolute size of the army as well? For example, will a leader drilling 6 units out of a force limit of 8 have the same chance of improving as one drilling 60 units out of a limit of 80? Or will the latter have a higher chance because of the overall larger army?
Toggle signature
"It is well known that nothing is such thirsty work as the acquisition of knowledge."

Can they do special kinds of drills? You know, like runite drills?
Toggle signature
Indie composer for PDX games. Follow me on Spotify and YouTube!
Latest release: A full original Music Mod collection for Victoria 3.

Creator of the Music Mod Creation Tool - add music to most PDX games in under 30s!

Nice. Do you already have ball park figure for how quickly the drilling bonus degrades?

Also how does doing actual combat affect it? One could say that the real thing prepares you better than just practise. Hence a unit that has done real combat vs. one that has only trained should be more effective.
Toggle signature
Paradox fan since EU1

Oh my god, read the last part once more. I am more than sure they are reworking mercenaries! Hallelujah!

Well...that is a buff without negatives for me as I have a no-tolerance policy regarding lower maintenance. Perhaps I am too lazy, perhaps I love the fact that my armies are always 100% ready to kill. I just never, never lower maintenance (I rather develop some provinces if I got a deficit)

Nice feature nevertheless. Also thanks for the screens

You say that drilling reduces morale, so during the time it takes for your troops morale to recover they will be losing drill. Would this mean that you would never want to fight with your troops at 100% drill as they have reduced morale?

And how reduced is the morale of your troops?

And surely winning battles should give troops experience and increase the drill value of the survivors, but then any reinforcements would then decrease drill, allowing you to consolidate your remaining forces to have a smaller, but higher drill army.
Toggle signature
Glorious Prussian Space Marines!
S

I hope the AI can handle the drilling feature. I can see players stackwiping AI that is drilling armies in border provinces. Also, the AI already has trouble staying out of debt. Inclining the AI to pay for troops on top of that might lead to more issues if not done right. Still, I like the potential of the feature and it indeed gives players a reason to keep paying troops similar to keep forts active.
Toggle signature
Tryharding games like Europa Universalis 4 in a casual manner.

I see that Barcelona has glass too. As someone from that city, I have always thought the main good should be fabric, as it was by far the most important good produced in the era here (and sold through the Aragonese trade network) and I always found weird that the province had wine instead, which, while important, it wasn't as relevant as fabric. I am not sure if glass had relevance tho so I don't know about the change.

Edit: after checking there was indeed an important glass industry in Barcelona and Mataró (neighbouring city) from the 16th century onwards, so I guess the change is fine, I suppose that maybe with the exception of Venice, for the other cities that now have it it wasn't the main economic activity either.
Last edited: Aug 22, 2017
Toggle signature
AAR EU2: Tea at five o'clock [1415-1785] - Ahora con imágenes restauradas
AAR CK2/EU4/V2/HoI3: Desperta Ferro! [865-2018]

Oh scheiss, I was hoping for a releasedate of a quick patch so I could play the new map really soon
Toggle signature
Tibet map overhaul: https://forum.paradoxplaza.com/forum/index.php?threads/tibet.1096518/

Why does Aq Koyunlu have 5 PP from the start?
Toggle signature
Sit now there, and look out upon the lands where evil and despair shall come to those whom thou allied. Thou hast dared to mock me, and to question the power of France, master of the fates of Europe. Therefore with my explorers thou shalt see, and with my spies thou shalt hear; and never shall thou be released from vassalage until all is fulfilled unto its bitter end.

Please show the trade goods of the polish/ruthenian region

Question to those who know the region: What kind of livestock was there?

"I think, but dont quote me on that" - Kissya
"I've not been getting it up for a long time" - DDRJake
"I'm gonna have to beat him off if I want to squeeze more out of this" - Atwix R.I.P.
T

Dominion said:
Question to those who know the region: What kind of livestock was there?

I can guess, but guessing is never knowing.
Click to expand...

Apart from horses, camels, cows, pigs, and dairy products, Livestock now covers a fair number of the pastoralists in the world. Previously they were always assigned wool.
Wool and Grain are now much more clearly for regions that actually produced cereal or wool.
Last edited: Aug 22, 2017
Toggle signature
No fighting in here! This is the war room!
M

Let's speculate on the new buttons.

Toggle signature
Sit now there, and look out upon the lands where evil and despair shall come to those whom thou allied. Thou hast dared to mock me, and to question the power of France, master of the fates of Europe. Therefore with my explorers thou shalt see, and with my spies thou shalt hear; and never shall thou be released from vassalage until all is fulfilled unto its bitter end.

Me_ said:
Let's speculate on the new buttons.
View attachment 293588
Click to expand...