Hello everyone. Tuesday has crept up on us once again which means it's time to armour up, grab my sword and jump back into the Thunderdome that is the Developer multiplayer, but before that, we've got a new Dev Diary!

Today we'll take a closer look at the much speculated Tributary States mechanic from the upcoming expansion. It's been fun reading the comments of this thread and see what the community has been suspecting we've put in the game. I'll be tackling that here

Getting straight to the meat of it, Tributary is a new subject type in Europa Universalis IV available for Nations in the Eastern Religion Group. Tributaries can be established both through warfare and through diplomacy and, while large nations are certainly not going to want to become your tributary willingly, through winning war you can force a nation of any size to bend the knee and pay up.

When you have established a nation as your Tributary, you will receive and annual tribute from them. You as their overlord are able to instruct them what to send, from Money, Administrative Power, Diplo Power, Military Power and Manpower. each year of successful tribute mutually raises trust between the nations. If you are the benevolent type of player, you can even tell them that no tribute is necessary. I am not a benevolent Overlord. 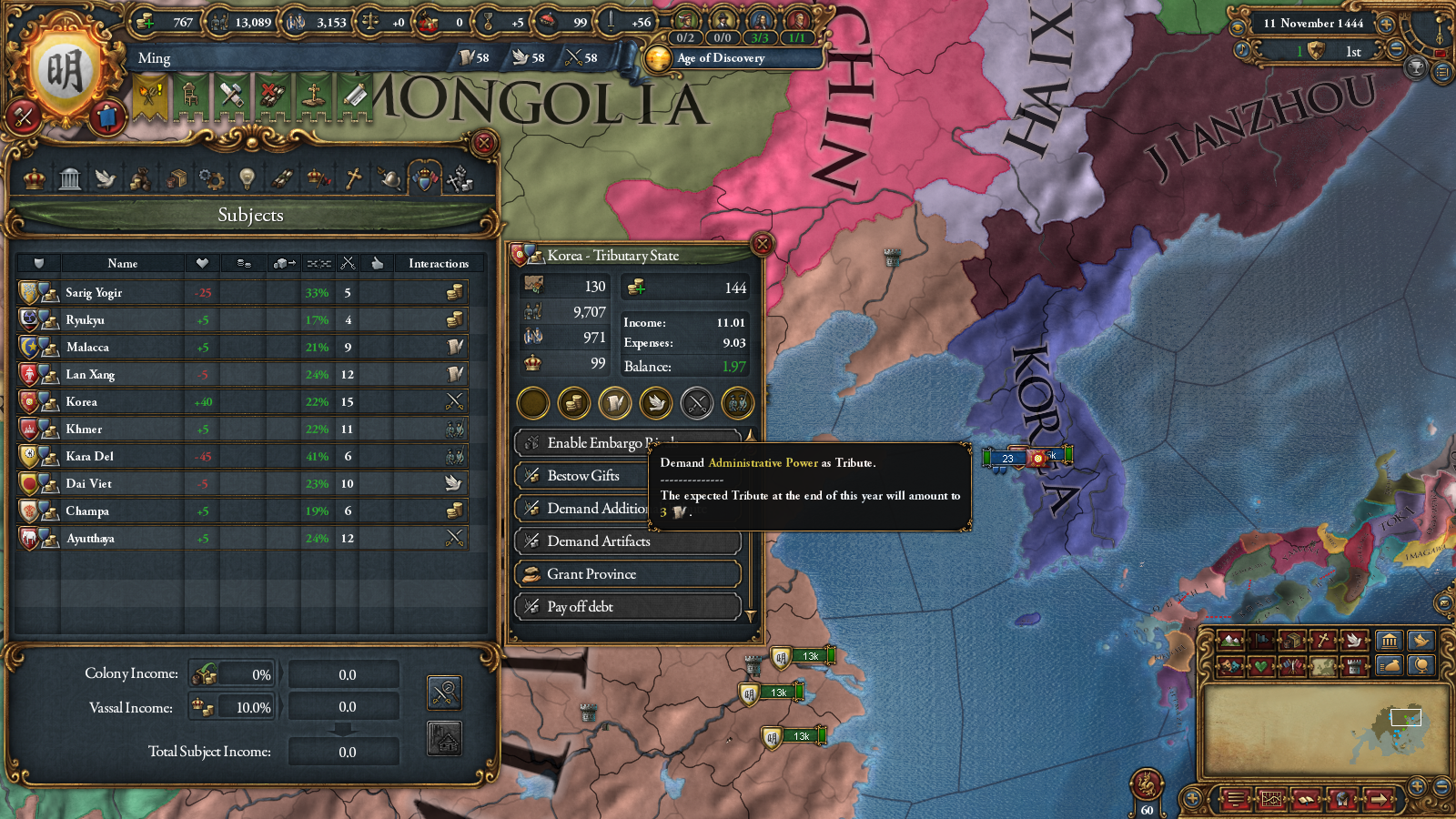 Here is Ming with their mighty collection of Tributaries. Along with demanding annual tribute, there are some new interactions available exclusively for nations with tributaries (artwork for them not yet in, so don't mind the placeholders):


these interactions will also affect the subjects' liberty desire, which brings us to an important point, what does it mean to be a tributary. For what purpose does a nation bend their knee to the tax collector?

Although Tributaries are subjects, they are the most free of any type of subject. They may make their own allies, subjects and foreign policy. They will not follow their overlord into wars or any of the usual subject behavior. Instead, they will be given protection. If another nation who is not also a tributary to the same overlord attacks them, their Overlord will be called to arms. The Overlord may accept or decline although, depending on the relationship and trust between the Overlord and Tributary. Declining will have ill effects on their relationship with their tributaries.

The main cause of relations going south is due to the subject refusing to give tribute. If liberty desire grows too high, caused by the usual modifiers from relative strength, relations etc, Tributaries may start thinking they would be better off keeping their hard-earned manpower, money or Power, and so refuse to give tribute. Eventually, this can lead to the Tributary relationship breaking down, so keep and eye on your subjects and don't demand too much additional Tribute.

Speaking of milking nations dry, it seemed only natural to give Hordes the ability to have tributaries. I've been having an absolute ball with my favourite nation keeping the Horde economy turning through my horseback tributary collectors. 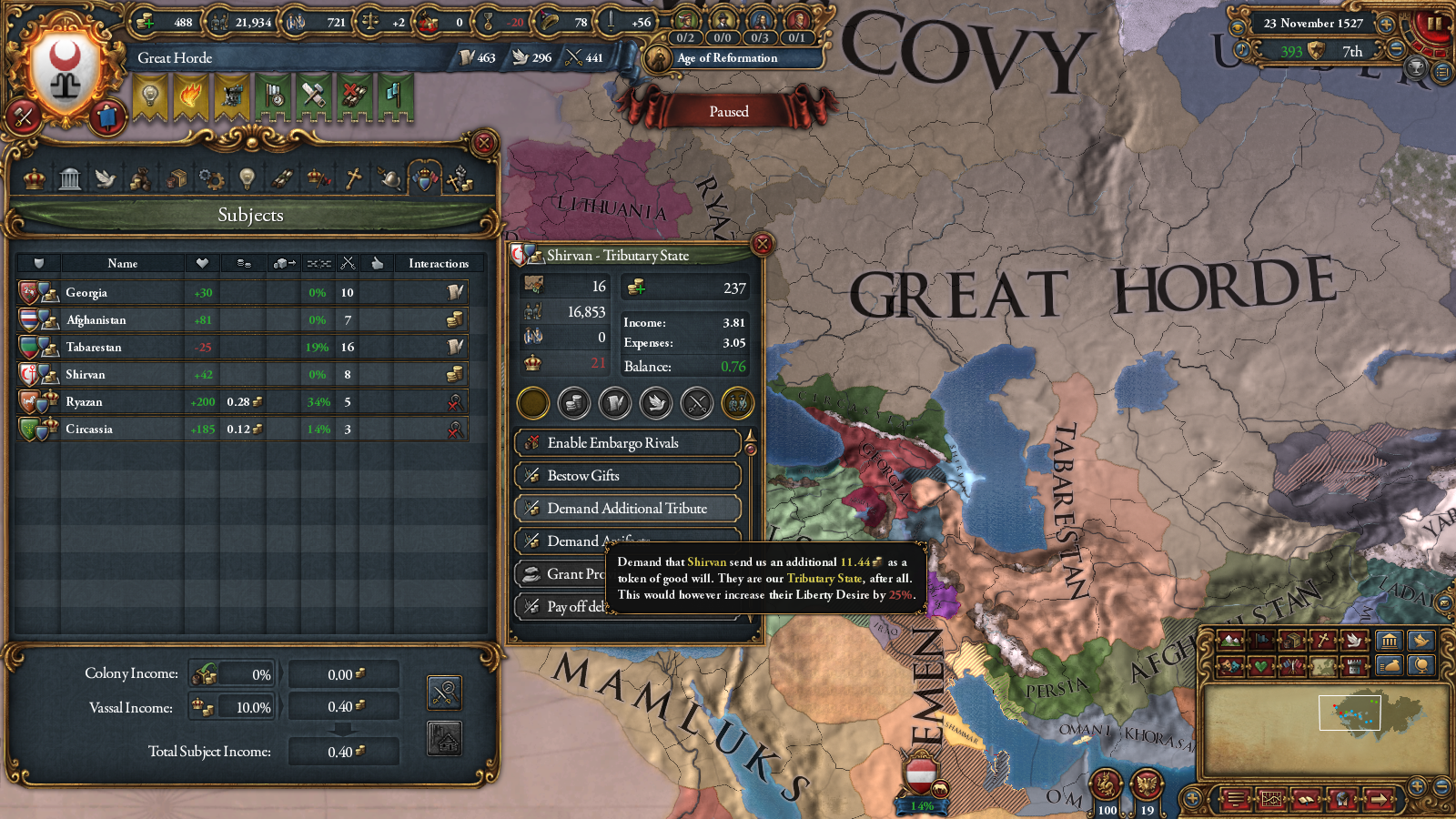 Tributary States are a paid feature in the upcoming yet-unnamed expansion, and are available for Hordes and for nations in the Eastern Religion Group (Shinto, Confucian, Three Buddhists) and are additionally available for any nation who is the Emperor of China.

What is the Emperor of China, you ask?

My God?
Toggle signature
A historical grand strategy game's internal management mechanics are only as good as it is fun to play China in that game.

I cannot wait.
Was hoping the next dev announcement would be the release!

Do I really see a grand tribute of 3 ADM per year?
Toggle signature
My YouTube channel (inactive)

Will Russia start as a tributary now?
Toggle signature
A historical grand strategy game's internal management mechanics are only as good as it is fun to play China in that game.

So it's basically a (mob) protection racket
Toggle signature
"Noone here is exactly what he appears" - G'Kar, Babylon 5 series 1.
"Only one human has ever defeated the Minbari. He is behind me, you are in front of me. If you value your lifes, be somewhere else!" - Delenn, Severed Dreams, Babylon 5 series 3.
"Time is infinite. You ... are finite. Zathras is finite. This ... is wrong tool" - Zathras, War Without End part 2, Babylon 5 series 3.
"If it floats and doesn't say quack, sink it !" - Imperialism
"The needs of the many outweigh the needs of the few, or the one" - Spock, Wrath of Khan

Yeah, I was going to ask if they cost a relation slot. Also, what happens if a tributary witholds tribute? Can you declare war on one of your tributaries? Is the tribute a fixed amount or scale based on factors?
Toggle signature
Tall Tales, a Tall France mini-AAR

It may sound like a little but it's quite a lot .25 a month from just one tributary, if you can hold more it becomes a viable starategy to keep nations around to farm monarch power, I wonder what the calculation behind it is, dev based? income based or static?

If it was static it would be insanely powerful 20 OPM Tributaries here I come 5 extra admin points a month.

A nice new type of subject. They look a bit like protectorate though (free diplomacy, no diplo-annex, various bonuses), sad those were let go.

@DDRJake are you going to detail in the future how overseas vassals (former protectorates) will work?
K

One question though, how does the relative strength liberty desire modifier work? Is it like vassals where it takes in to account all other tributaries, or is it like colonial nations where it only takes the strength of each tributary individually?

When will this patch go live?

Is the subject type now can be modded?Since there are two new types this expansion,I am so curious about this.Like this

Can you support the independence of a tributary? Will it turn into an alliance at war declaration?

If you no longer meet the requirements to make tributaries, are all your current tributaries released?
P

Most important. Are numbers fixed or amount of manpower/powers/money depends on development of your tribute?

All tribute types scale with the size and income of the tributary. The numbers as ever are in balance as we work on this expansion.


DàbiànLājīdàrén said:
Will Russia start as a tributary now?
Click to expand...

This was considered but ultimately discarded. The hordes were already on the decline at the time.

Tributaries do not cost relation slots

One question though, how does the relative strength liberty desire modifier work? Is it like vassals where it takes in to account all other tributaries, or is it like colonial nations where it only takes the strength of each tributary individually?
Click to expand...

Tributaries will only consider their own strength in the relative strength calculations.


Birnenpappe said:
Can you support the independence of a tributary? Will it turn into an alliance at war declaration?
Click to expand...

As Tributaries do not fight for independence (They can and will cancel tributary payments if they remain at high liberty desire and skimp on rent for too long) and so do not get "support" for independence
Last edited: Feb 21, 2017
Toggle signature
The Three Mountains: EU4 Ryukyu World Conquest AAR
​

After the release of Monks and Mystics for CK2, but before the release of Utopia for Stellaris and the as-yet-unnamed patch/expansion for HOI4.
Toggle signature
"'Join me, and together we can rule the galaxy as father and son'. What do you think the implication for the Emperor was, we'll get him a retirement home in the Crimea?"
-RedRalphWiggum

DDRJake said:
This was considered but ultimately discarded. The hordes were already on the decline at the time.
Click to expand...