I’m Anona and I’ve been the Project Lead for EU4 for the last year + a few months. This means I’ve been driving the development of processes within the team and making sure we’re on time and budget - and not to forget team activities . Mare Nostrum, Rights of Man, Mandate of Heaven and Third Rome have been awesome to work on with such an amazing team as the EU4 team. On one hand it feels good to focus on only one project from now on: CK2, but on the other hand it’s sad to leave such a high-performing, experienced, competitive and positive team with a strong will to become even better.

Luckily I leave the project in good hands to our new Project Lead Linda Tiger, who has lots of experience, the right attitude and good knowledge of work methodologies.

To say something about the year that has passed there have been some changes to the team: Our ex AI programmer Chaingun has gotten a replacement in Gnivom and Ihki has gotten replaced by Groogy since they have moved on to other projects outside and inside of the Paradox Universe, respectively. DDRJake has become even more responsible for the design of the recent expansions and Johan is currently on a long holiday lasting three months. But of course he can’t keep himself completely outside Paradox so he pops up now and then anyway…

One of my best memories is the release of Rights of Man. We had all put a lot of effort into the game and I was extra nervous since it was the first EU4 expansion for which I had been Project Lead from start to finish. But the release went smooth and steam reviews were fantastic, on par with Art of War and El Dorado. Not sure if the following event was related to the Rights of Man success or not but some time later we got gingerbread cookies sent to the office from a fan, some of which were showing the art of the loading screen for Rights of Man. I kept one and everytime I look at it nowadays I feel pride for what we did with Rights of Man.

Thanks for all the feedback you’ve given the last year, it’s been incredibly valuable for our games!

Did you know that several people in the team have been eternalized in EU4 event pictures? 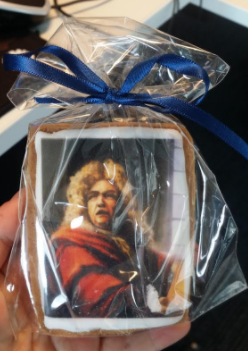 And big thanks Anona for the introduction! I am super excited to join such a talented team and continue the journey with our magnificent Europa Universalis IV - lots of exciting stuff in the future for sure. Looking forward to get to know you all and to be part of this dedicated community - let’s do this!

Ok
Toggle signature
Each scar is a victory.
A

Time to work and fix the Third Rome!
J

Should've worried more about bug fixing then releasing on time it appears.


When are the ugly square-shaped provinces in modern Ukraine region going to be fixed?

I mean c'mon! The "Russia" patch was great, but leaving almost unchanged one of the ugliest regions in game is kinda weird, especially in themed patch
Last edited: Jun 20, 2017
Toggle signature
Ukrainian Lands at the 16-18th Centuries Maps
[EU4] Multiplayer Rebalance Mod (MPR by ZP) [SteamWorkshop] - a mod designed for MP fans by an MP fan

Bug-fixing rebels always appear with dev diaries. We already know you are working on bug-fixes and keeping down unrest.

This is a nice and welcome introduction!
Toggle signature
My Mods
My Hungary Overhaul Mod useful for playing for and against
http://forum.paradoxplaza.com/forum/showthread.php?808023-MOD-Hungary-Overhaul

Thanks for all the good work Anona!
And welcome aboard Fogbound! Steer the ship well.
Toggle signature
Paradox fan since EU1

Thanks for all the hard work and good luck on ck2!
Some of the most fun I've had in the game was with Rights of Man and Mandate of Heaven
No matter how many hours I put in I always find more things to do thanks to your continued efforts
Toggle signature
-20600+ hours logged on eu4 - send help
Check out my youtube channel for things like:
The Three mountains 1.13.
The Three mountains one-tag on very hard 1.17
Making a 1 million merc stack on very hard
Atheist Pope
American Primary Culture USA Horde government

So the EU4 lead is disconnecting from it to work solely on CK2, a game that should have its last expansion currently in development if Paradox's account is precise? I suppose either CK2 still has some more steam left or the next DLC is going to be huuuge.
Toggle signature
Title: Alpacaliph of Alpacórdoba
Culture: alpacatalan
Religion: alpacatholic
Traits: alpacraven, alpacoward, alpacalvary leader, alpacaranoid, alpacharismatic negotiator, alparchitect
Ideology: alpacho-liberal
Issues: alpacanned economy, alpacatheism, full alpacitizenship, alpacifism

To be fair this is an informative diary; it informs us of change in project lead.

Thanks for your work. They're good expansions.


Anona said:
View attachment 278266
Did you know that several people in the team have been eternalized in EU4 event pictures?
Click to expand...

Wow, that's cool. Didn't know it. Sad we will never know these secret little easter eggs (?). I love all the art in EU4, and hope we will see a DD on this subject someday.

Please just stop developing EU4. The game peaked in the expansion before institutions. The recent expansion have been nothing but bloat for a game which was very good to play in multiplayer. Now you have to mod away all the useless stuff if you even want to consider playing it.

Did you notice the number 'Third' in the title of last Eu4 pack? Clearly hinting at next game release.

Searry said:
Please just stop developing EU4. The game peaked in the expansion before institutions. The recent expansion have been nothing but bloat for a game which was very good to play in multiplayer. Now you have to mod away all the useless stuff if you even want to consider playing it.
Click to expand...

Why does it even matter to you then? If you don't like the patches and don't like the DLC then just stay on a previous patch and any further development doesn't impact you.


OT: Thanks for your work Anona! I like hearing the personal take and am pleasantly surprised there's a Dev diary at all given the recent release.