Good afternoon. It's Thursday and that means we in the EU4 team are being shaken down for Dev Diaries. With Johan cooking something up for you all at Gamescom, I'm back in the saddle to bring you another taster of what's to come in our upcoming [name-leak patched] expansion.

Fetishists were introduced lately, diversifying the Pagan religions by having a tailor-made African variant. While they have some purposed African events, the religion was left without its own mechanics, leaving it looking at its religious brothers with envious eyes.

No longer! As a feature in the upcoming expansion, Fetishist nations will have a choice of Cult granting them bonuses and unique events. Where in Africa you start will determine the Cults which are available to you, giving Central Africans a different starting Cult selection from, say, the West Africans 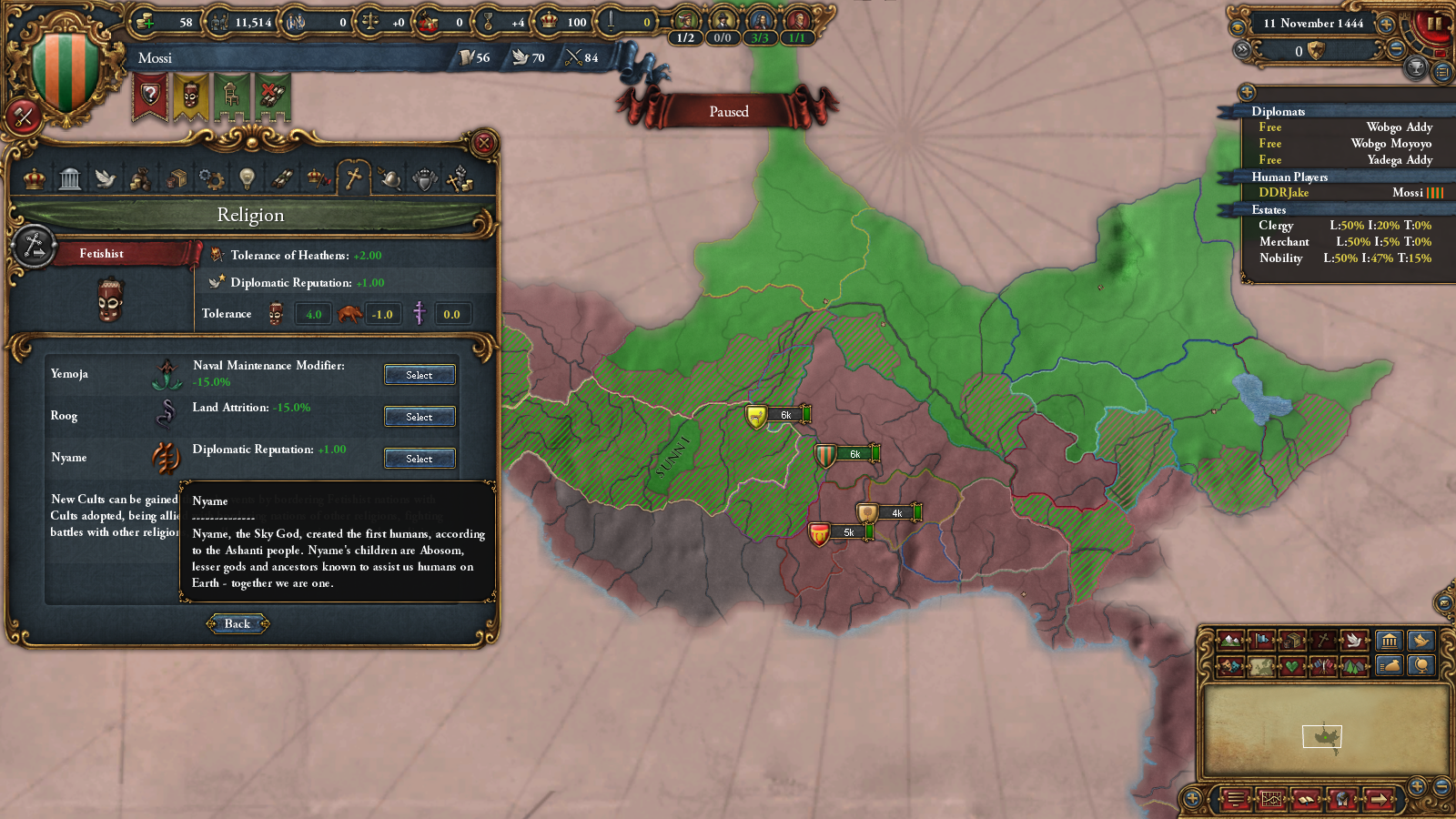 "Starting" Cult selection you say? Yes. The mechanic will look similar for those of you who enjoy some Hindu campaigns but our Fetishist friends can add some extra tools to their belt as they forge their destinies.

Each Fetishist nation will start with 3 Cults available to them, which can be chosen from by each new ruler. Additional Cults can be unlocked through interaction with other faith groups. Through fighting, bordering with alliance or ownership of heathen land, you can unlock additional cults based on that faith. Each monarch can choose one Cult to worship, granting a national bonus and unlocking events for that cult. 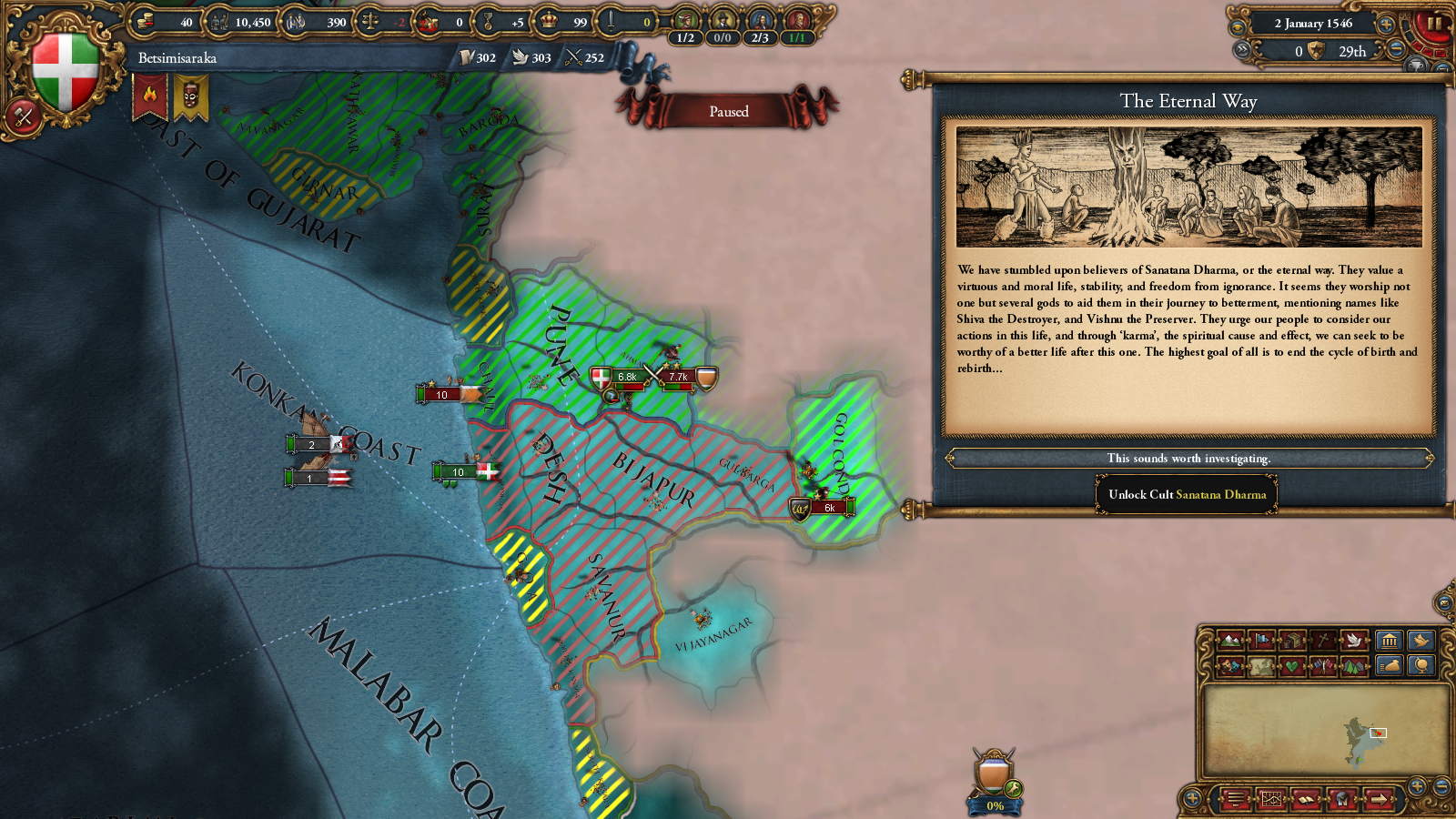 Last I counted, there are 17 in total If you've been putting off that Victorian Three achievement run, 1.18 is the patch to go for it. Fetishist Cults, along with the Coptic Holy Sites mentioned before, are paid features in the upcoming expansion which will be released alongside the 1.18 free patch.

Between the changes in the throne room, the religious mechanics, Great Powers, Traits, Personalities and tech overhaul, you could be forgiven for thinking we have run out of things to reveal about the upcoming expansion and patch. You would still be far from the truth though. We'll be back with another Dev Diary next week to talk not just about what you can do for your subjects, but what your subjects can do for you.
Reactions:

can we make the subjects kill our 1-1-1 ruler ?
Reactions:

Awsome, can we get some more sample cults?
Reactions:

Cults sound like an interesting and important fleshing out of the fetishist religion.
Will the monarch be able to switch cult during his lifetime through a decision or an event?
Reactions:

Will you get a cult representative of Fetishist-Sunni syncretism? That would be a nice touch and work around.
Toggle signature
You don't hate Mondays, you just hate capitalism.
Reactions:

What about custom nations outside of Africa?, is there a platypus cult in australia?
Reactions:

Will Orthodoxy ever get an overhaul?

Current meta is tied on mercs heavily, meaning that "+33% manpower" is kinda useless and "-33% local tax" is harmful. That said, levelling patriarch authority is completely useless. Also worth mentioning, that Orthodoxy is one of the few religions that doesn't give any military-related quality boosts (morale, discipline, CA).

Even Catholics may get +10% morale with their crusades
Toggle signature
Ukrainian Lands at the 16-18th Centuries Maps
[EU4] Multiplayer Rebalance Mod (MPR by ZP) [SteamWorkshop] - a mod designed for MP fans by an MP fan
Reactions:

When is Johan's great revelation planned?

Does that mean that the name has been leaked, or do you just fear it gets leaked pre games con like has happened several times previously?

Also is it correctly understood that cults gets cleared when your ruler dies? I.e. you always only have have one?
Toggle signature
We need Chalcedonian Christianity in 867 A.D. instead of Catholic/Orthodox split for Crusader Kings III. Copy and paste this into your signature if you agree!

Shinto also needs mechanics too! It doesn't have anything special yet apart from the morale boost
Reactions:
S

I am surprised that fetishism as a new religion, got the unique mechanic so quicky.


btw do sth with this ridiculous, ahistorical merc spam


the easiest and the fastest way is to reduced mercenaries pool from land forcelimit to 2
Last edited: Aug 18, 2016
Toggle signature
History of Modern Europe in 10 minutes

Sadly Jake is feeling a bit under the weather today, so I don't know how much he'll be able to respond.
Toggle signature
Eternal King of North Kuba Luba

"Last I counted, there are 17 in total If you've been putting off that Victorian Three achievement run..."

you mean you are going to announce victoria 3 in gamescon
Reactions:

BjornB said:
Sadly Jake is feeling a bit under the weather today, so I don't know how much he'll be able to respond.
Click to expand...

Wagonlitz said:
Does that mean that the name has been leaked, or do you just fear it gets leaked pre games con like has happened several times previously?
Click to expand...

My bet is Jake almost wrote the name into the post. Either way, the fix was much swiftier than that of Military Zeal Act in Mare Nostrum.
Toggle signature
It's time for a little self advertising:
*My proposal on change in cultures *Rulers' traits *Remove hostile core creation! *Trade Unions *Culture Conversion *Allow HRE princes to form kingdoms again
*Teutonic Order + Bohemia = BFFs (also the case of Samogitian coast and Livonian Order) *My take on a dynastic system *Let's Spice Up the Central Asia! *1.21 Hungary Patch Observethrough: The Balkan Oddity
*Custom names for wars and battles should be a thing! *Restoration of union casus belli should be permanent *Releasing only part of a nation's cores *On the Dutch Revolt and other Dutch things
*Diversifying Prussia *Please, change Polish ideas! *The raiding parties *Expanding Personal Unions *Remove arbitrariness from colonisation!
*Let us favour particular cultures *and religions! *Add new provinces to the Baltic Region and Romania! *Allow us to edit our countries upon reaching empire rank! *#MakePrussiaBlueAgain
Not Accepted... yet ; Partially Accepted ; Accepted! ; Other(not suggestion)

DDRJake said:
Victorian Three achievement run, 1.18 is the patch to go for it.
Click to expand...

Am I the only one who reads "Victoria 3 will be released January 2018"?
Toggle signature
CK3 Mod: Sunset Invasion
GEDCOM to CK3 conversion tool

I wonder about the geographical nature of these cults: Will some cults only unlock once you hold certain regions or (sub)continents?
And will some be tied to culture groups within your empire?

If I counted it correctly - this "still unrevealed expansion" would be so massive that prize will be definitelly more than 15€...
Toggle signature
My articles:

Hearts of Iron 4
Czechoslovakia - maybe not so weak - short history of pre-war Czechoslovakia
September 1938 - world on crossroad - Czechoslovak mobilization in 1938, which could change history​
S

How do the Sami fit into this?

Their state religion is Fetishist but they share nothing in common with Africa.