Jump to latest Follow Reply
Menu
Install the app
You are using an out of date browser. It may not display this or other websites correctly.
You should upgrade or use an alternative browser.
Europa Universalis IV 77216 EUIV: Suggestions 16765 EUIV: Technical Support 6032 EUIV: FAQ & Strategy Guides 202 EUIV: AAR's, Let's Plays, and Fan Fiction EU IV: Alternate History Short Story Contest Contr 26
Previous dev diary Next dev diary
Show only dev responses
Good morning! I’m skingrado, one of the new content designers for EU4 at Paradox Tinto, nice to meet you all! To begin with, I think it’s very important that you know that my favorite castle is Loarre, that’s my main personality trait, so I hope that gives you an idea of who I am (and, as you can imagine, I’m also a big fan of GSGs, and I used to play a lot of CK with my dad). But today I’m here to show you some of the things we’ve been working on for the North American Natives, since a lot of you asked for more content after the reveal of the new mechanics (nothing to do with castles, I’m afraid).

We’re creating completely new native mission trees (since until now they mainly had the generic missions) and we’ve started by designing six new geographical mission trees available to all tribes, according to their localization and culture at the time of contact (i.e. very close to the start of the game). You’ll notice that some of the traditional cultural areas have been merged into one single tree (Northwest Coast + Plateau, for example), more on this to come next week. I’ll be now talking about some that I’ve done:

(Notice that all icons are still placeholders).

The Northeastern Woodlands extend from the Atlantic Coast to the eastern Great Plains, going slightly above the Great Lakes in the north and bordering the Southeastern Woodlands in the south, roughly including the present Mid-Atlantic states. People from this region generally lived in villages with a few hundred inhabitants and used wigwams and longhouses for shelter, as well as canoes for traveling, fishing, trading and warfare. These villages were often placed near their crops, since the so-called Eastern Agricultural Complex was their main source of food, characteristic that they shared with the nearby Southeastern Woodlands.
Their social organization was based on clans, which were often named after some relevant animal to the area, such as wolf or bear (you’ll see more on clans in the events).

Some highlights of this tree include:

Then we have the North American Southwest, which mainly includes Oasisamerica and borders the Plains-Great Basin to the north. People from this region farmed as a complement to their hunter-gatherer economy (in the case of Aridoamerica tribes) or even had a truly agricultural society in the case of the Oasisamerican tribes. They also cherished precious minerals, like turquoise and cinnabar, and had some interesting ancestors that we will address now on some of the missions:

Now moving to the part that is slightly more fun, we have designed mission trees specific to some of the best known native tribes. Today, I’ll be focusing on the Iroquois: 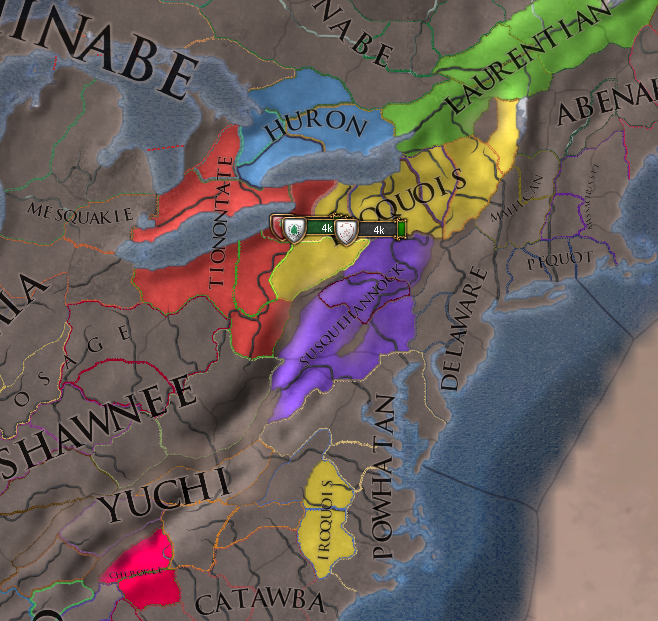 As you can see, culture groups in Native America have been changed, and these missions will be available to those that have “iroquois” as their primary culture. These tribes are mainly known for the famous “Iroquois League” or “Iroquois Confederacy”, which was established prior to European contact and granted these nations security and protection, as well as a saying in the Great Council that ruled over them, much like how the new Federation mechanic is going to work. The focus of this tree is to form said Confederacy and extend its power:
And, of course, we have also added some events. Some are generic, others will be linked to the totemism “rework” and a few will be specific to certain tribes as well. In this case, the Iroquois culture group gets a new event chain called “The Mourning Wars”.

Mourning Wars were fought when some of the tribe’s warriors were killed in battle and the spiritual balance of the village had to be restored. For Iroquois nations, grief did not come only for the loss of a loved one, but also for the loss of harmony. Thus, they would try to compensate for it, and that compensation came in the form of mourning wars. Now, a series of events will let you decide whether you should kill in revenge for the killing (which will lead to some nasty consequences, since it goes against the spirit of the war), or maybe take some captives in replacement for the dead members of the tribe.

Expect more information on this matter next week! Thank you for reading
Last edited: Nov 17, 2020
Click to expand...
Written by

Are we finally getting the Iberia update? The Pirate Republic update was cool and all, but we're still excited for the supposed update that Iberia was supposed to get; can't wait!
Toggle signature
Vaximillian said:
but the Polynesians bro
Reactions:

A question: what happens when you have no CoP DLC? Right now, without it natives are permanently stuck in native council, since they don't have government reforms, and don't have their unique reform mechanic. Will some of their unique reforms (including those to become republic/monarchy) be available even without DLC?

Cool. I was living in a fear of having to play North American without new mission tress. Now the devs have not only have swallowed no update for Totemist but also mission tree for the First Nations. Thank you!
Reactions:

To confirm, are horses unavailable until X amount of years after the Europeans arrive?
Reactions:

Oh yes! Great to see a first Impression of the work the tinto team is doing and that you heared the Community. I think it is very important to use the research you did for the Mission trees to reflect in events for the natives, as missions are often just clicked. Hope that there are a lot of events.nice that you wrote some! They really immerse the game. Thank you
Reactions:

As time goes on I need to remind myself how huge this update is. Religion, NA, and SEA. I cant really find a common theme, so I wonder what they will call the expansion.
Reactions:

Will mission trees involve European powers in any way?
Reactions:

@skingrado Fantastic work, thanks! North American tribes were the first tags I played as when I was starting to lean the game, so I can’t wait to revisit them after this update.

With that in mind, do you think you might end up reworking the Pacific Northwest after all, since it seems like you guys have decided to give North America some additional focus (both in terms of tags/flavor and some new provinces and sweet, sweet strategic impassable terrains)? Now that everything east of the Rockies has received much-needed attention, the Northwest will be the only part of the continent that will feel barren. I remember a dev saying in an earlier diary that they were skipping it partially because they didn’t think there was much known about the history of the region, but having worked with and studied various local tribes, I can say that there’s a fantastically rich historical/archaeological record to draw from.
Last edited: Nov 17, 2020
Toggle signature
Hoping for improvements to the Pacific Northwest.
Reactions:

I think events regarding that would work quite better. Events when the first europeans are seen on the coast; the first colonies (and colonial nation), the first war against a native nation. Events regarding horses, new weapons, ships and the plagues the europeans got. As well an Eventchain about the missionarys and the church
Reactions:

Metz said:
To confirm, are horses unavailable until X amount of years after the Europeans arrive?
Click to expand...

No changes on this matter.
Reactions:

Yes, some of them will, but it's not the main focus.
Reactions:

Is this an expansion or an update after all? Yes I know that updates are released at the same time as expansions, but I am asking about this one.
Reactions:

Will Siberian tribes get some love too? Thanks.
Reactions:
A

Finally Iberia getting what it should have had in Golden century (the shameful dlc) ?
Reactions:

Are we finally getting the Iberia update? The Pirate Republic update was cool and all, but we're still excited for the supposed update that Iberia was supposed to get; can't wait!
Click to expand...

Interesting DD, I have little to no knowledge about North American tribes but it's always good when a zone gets researched and receives proper attention.
Toggle signature
Return of the Baker (Mod)
Madeira, Pearl of the Atlantic.
Order of Christ (Playable Monastic Order idea)
Reactions:
M

Nice. How many new mission trees will there be?

Sunlg103 said:
As time goes on I need to remind myself how huge this update is. Religion, NA, and SEA. I cant really find a common theme, so I wonder what they will call the expansion.
Click to expand...

The expansion elements (as opposed to free content/changes to old DLC) announced/suggested so far were general or focused on SEA, so I would wager that SEA will be the source of the title.
Toggle signature
Sit now there, and look out upon the lands where evil and despair shall come to those whom thou allied. Thou hast dared to mock me, and to question the power of France, master of the fates of Europe. Therefore with my explorers thou shalt see, and with my spies thou shalt hear; and never shall thou be released from vassalage until all is fulfilled unto its bitter end.

What are birchbark canoes? Is this native Americans finally getting some ships?
Reactions:

Not really concerning the content but will Natives get boats again when they reach a certain point?
Toggle signature
Not a native-English speaker, so pardon my english

For help with your game you can always PM me!
Reactions:

What do you mean by that? Will there be a new trade good "Yucca Palm Trees" or will it be done differently?

Last edited: Nov 17, 2020
Toggle signature
EU4 ads be like:
Is your PHOENIX purple, itchy? Try out our new ointment "OTTOMANS", the best purple PHOENIX removal for ONLY $2.99.
The Pope begged them to stop IT, but they haven't listened and now they earn 15k without leaving their homeland. Learn how!!!
Habsburgs hate HIM!!! Learn one simple trick and enlarge IT by 20 in just one night!!! Lonely burgundian queens in your neighboorhood await!!!
Reactions:
Show hidden low quality content
You must log in or register to reply here.
Share:
Facebook Twitter Reddit Tumblr WhatsApp Share Link
Top Bottom