So, how does the absolutism mechanic now work?

First of all, we’ve removed the Absolute Monarchy government form.

Secondly, administrative efficiency from technology is now 10% from each tech giving it.

Governments now have an “Absolutism” value, which ranges from 0 to 100, and this increases your administrative efficiency with up to 40% and your discipline with up to 5%, and makes foreign cores on you decay 3 times as quick at maximum absolutism.

There is also a maximum value to absolutism a nation can have, which defaults to 65, with legitimacy increasing it up to +20, republics decreasing it by 30, religious unity increasing it by 5, great power by 5, being empire by 5, and several other factors.

Several events and ideas talking about absolutism now affect absolutism either by directly increasing it, or having a yearly increase.

Absolutism is not just a number that ticks up or down like so many others, this is tied into the actions you do as a player.

These numbers will be tweaked during the development, and actions impacting absolutism may be added or removed from this list.

Whats cool for modders is that you can script absolutism impact individually for your age. 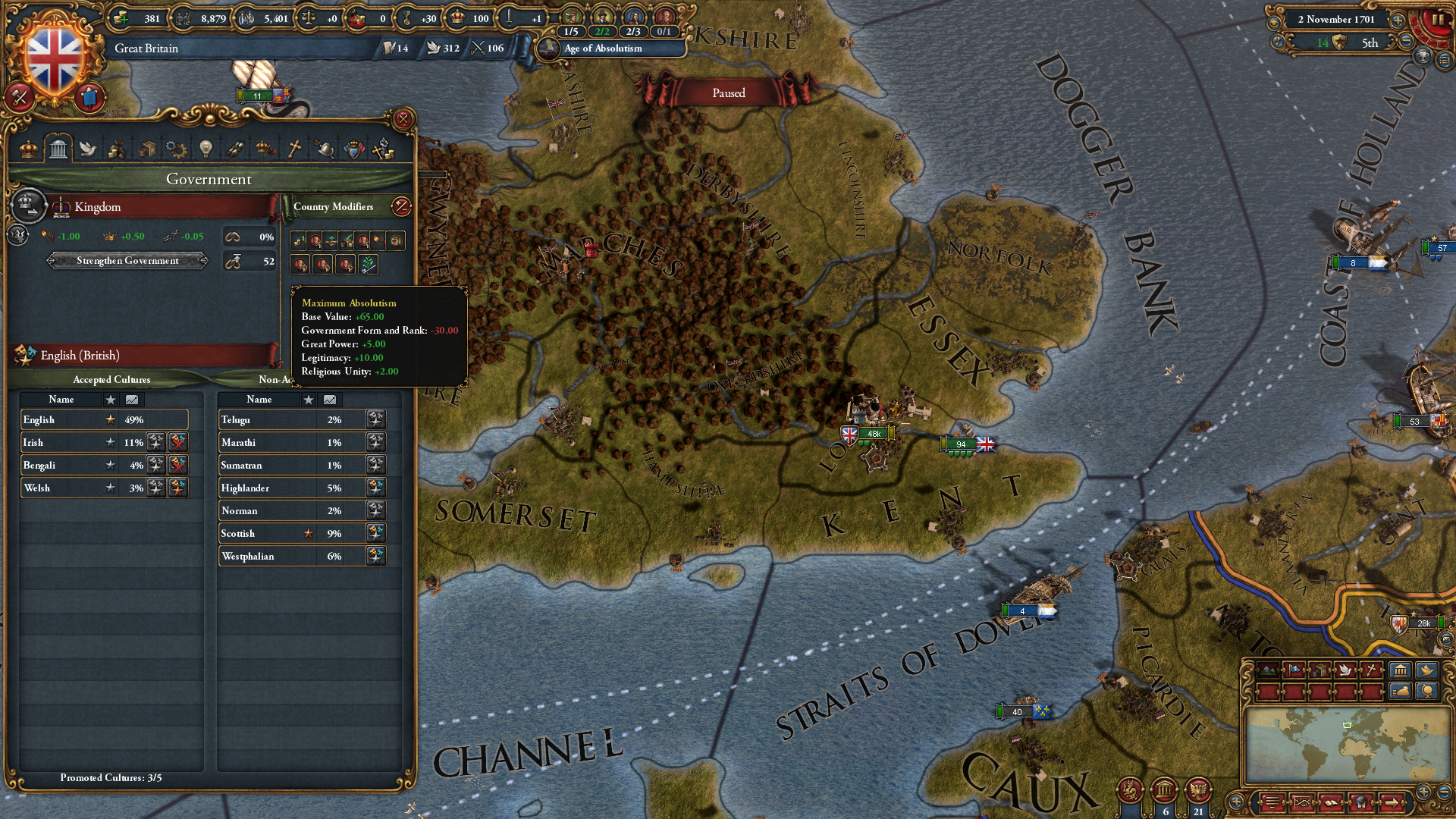 Here is the special things regarding the Age of Absolutism, which lasts from 1620 until 1710.

Absolutism mechanics are enabled.
English Civil War & Court & Country Disaster, can only happen in this Age. 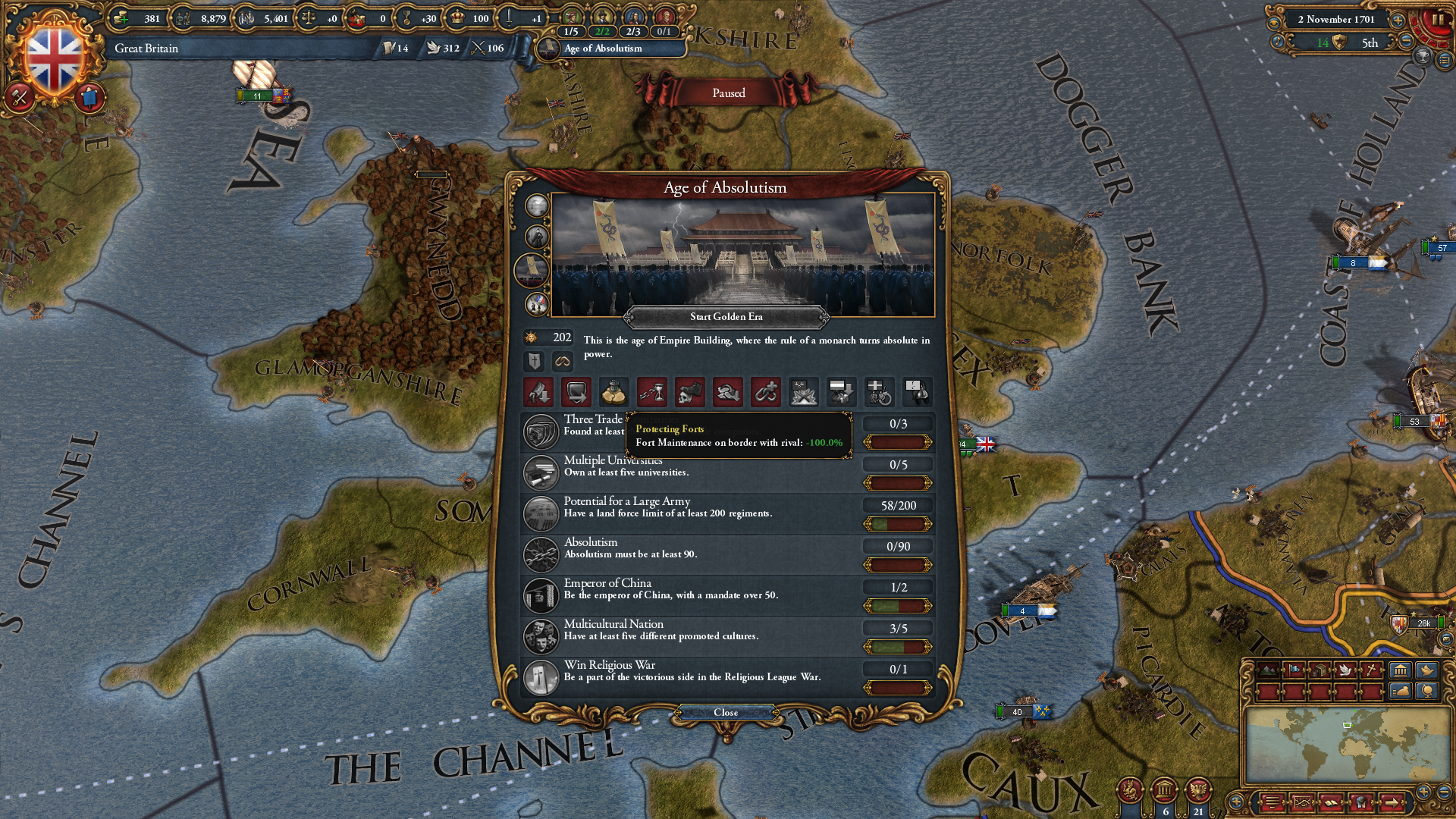 Next week, we’ll look into the Age of Revolutions.
Reactions:

What does the Manchu-specific boost, +50% larger banners, mean?
Reactions:

Emh, what are banners?
Reactions:

It seems to me that the "Mandate of Heaven" is now a number too like Absolutism, or am I wrong in that?
Toggle signature
My other and most recent AARs:

Take a look at my Inkwell for my other EU4 AARs I made.
Reactions:

well we can assume the y get something special showing up there special mil idea of the banners which was a way how manchu and quing organised there armys. No idea how that is in the game but right now its only a unit type. So seems there are some new mechanics in the area

Mandate over 50?
Toggle signature
Thou shalt not make a machine in the likeness of a human mind.

Recently I had a discussion with a friend of mine on the topic of EU4 being an extremely long game encompassing a number of varied historical periods.
The ages mechanics look great as the solution to differentiating these periods without the need of more violently subdividing the game. I applaud the designers for this idea!

Well done absolutism mechanic! Is it present in the Age of Revolution too?

"Be emperor of China" is a very mysterious one...
Reactions:

Max adminstrative efficiency is now 70%? Nice. Are there any reasons not to make absolutism as high as possible?

You teeeaaase
Toggle signature
"Gonna fly this baguette to the moon somehow!"
Reactions:

Wouldn't it better to give Sweden high bonuses to mercenaries maintenance/pool instead to represent things during 30 years war?

Also, will Absolutism value be visible on a top panel near stability/prestige etc?
Reactions:
I

Will you show us new system for China today?
Reactions:

Martynios said:
Well done absolutism mechanic! Is it present in the Age of Revolution too?

The Dutch bonus seems a bit weak to me.
Click to expand...

Its present in Age of Revolutions as well.

It allows you to debase currency quite often
Toggle signature
Johan Andersson
Studio Manager Paradox Tinto - Follow me at Twitter!

Will there be any benefits to lower/penalties to higher absolutism? Or will we always want it as high as possible?
Reactions:

Also, for the age description, might I suggest ""This is the age of Empire Building, where the power of a monarch becomes absolute." (Should this go to the bug/suggestion forum?)

"The rule [...] becomes absolute in power" feels off to me.
Last edited: Jan 17, 2017
Toggle signature
"Gonna fly this baguette to the moon somehow!"
Reactions:

I hope the +50% Larger Banners is just a cosmetic effect to have your troops appear bigger and badder!
Toggle signature
Capital: The area of a country, province, region, or state, regarded as enjoying primary status, usually but not always the seat of the government.
Capitol: A building in which a legislature meets.
Reactions:

Do the 5 promoted cultures include ones accepted from being an Empire rank?
Toggle signature
Feel free to watch me fail on a galactic scale:
https://www.youtube.com/playlist?list=PLohVJUDxWQUF8MPK42q4Y89MKqhKPfxNX
Reactions:

Johan said:
Absolutism is not just a number that ticks up or down like so many others, this is tied into the actions you do as a player.

This is really really great. Really nice to get mechanics which aren't isolated from what you do, but instead are closely tied into everything and hence affected by your actions. We need more of that kind of mechanics. Why does Great Britain get that -30 when they're a kingdom? Wasn't it republics getting a -30?
Toggle signature
We need Chalcedonian Christianity in 867 A.D. instead of Catholic/Orthodox split for Crusader Kings III. Copy and paste this into your signature if you agree!